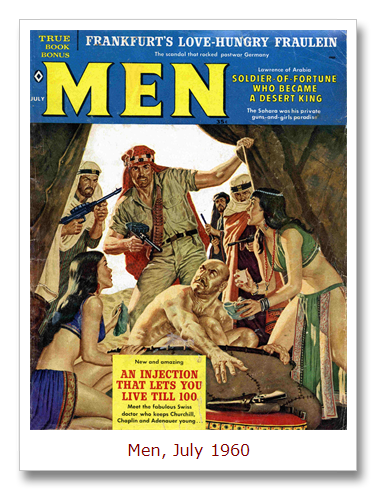 The pulptastic cover art on the July 1960 issue of Men magazine is by of the most talented and popular pulp artists ever, James Bama.

It’s a teaser for an article inside about Colonel T.E. Lawrence, the legendary “Lawrence of Arabia.”

The article itself is non-fiction and basically non-embellished. But you wouldn’t know that from the cover painting. 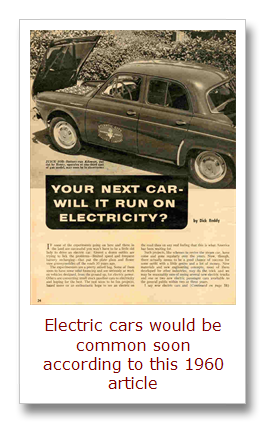 I’m a big fan of both the Doc Savage prewar pulp magazines and the later paperbacks.

So, I especially liked this issue’s cover art and cover story.

It also has a fascinating article about electric cars.

The article describes various electric vehicles being developed by both small innovative companies and larger corporations, like American Motors and General Motors, and it suggests that electric cars would likely be common before the Sixties were over.

The article also talks about a new breakthrough – Prius-like hybrid gas and electric cars. And, it notes that “many major companies – Union Carbide, Chrysler, General Electric and Curtiss-Wright among them” are “hard at work” developing non-polluting, hydrogen fuel cells to power our cars.

Apparently, those big corporations needed to do a lot of testing before they thought it would be safe for us consumers to have that kind of car tech.

Thanks for watching out for our best interests, guys.