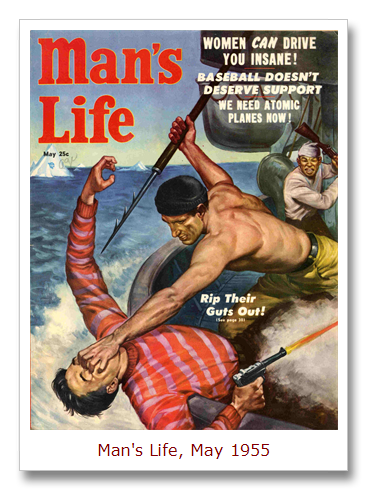 Decades before the controversies over players on steroids and taxpayer-funded stadiums, some baseball fans were already mad as hell about the trends in “America’s national pastime.”

In 1955, one of the cover headlines on the May issue of Man’s Life magazine groused “BASEBALL DOESN’T DESERVE SUPPORT.”

It’s sandwiched between two other provocative coverlines: “WOMEN CAN DRIVE YOU INSANE!” and “WE NEED ATOMIC PLANES NOW!” Further down is the headline for the story that goes with the issue’s absolutely smashing cover painting by noted pulp artist Milton Luros.

The cover story – delicately titled “Rip Their Guts Out!” – tells of a bloody fight between American and Japanese whalers, who cross paths while slaughtering humpbacks and blue whales not long after Pearl Harbor. They end up slaughtering each other.

The baseball article is a rant by writer Tom Blades. His gripes will sound familiar to today’s baseball fans, despite the fact that the article is over 50 years old.

“The people connected with the game,” he observes, “have changed. Disappearing fast are the Wrigleys, Comiskeys, Briggses, and Griffiths, the type of wealthy club owner who took the profits if they came and stood the losses if they didn’t, but who also made baseball a hobby. And, on the scene has come a new type of owner interested only in profits.” 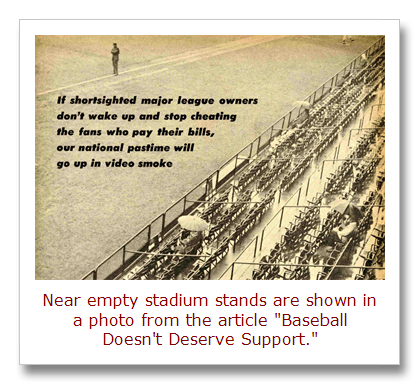 “The same attitude infects some of the players,” Blades grumbles. “Their ardor for the game is in precise ratio to how much money they can make out of it.”

Blades also complains that the only way for fans who aren’t rich or famous to get good seats is by giving surreptitious bribes to the ticket booth clerks and stadium ushers. And, then there’s the annoying trend of owners moving teams from one city to another, cruelly breaking the hearts of thousands of loyal fans.

“Baseball men seem now to have embarked on a determined policy that can only end in wrecking the game,” Blades grumpily concludes.

His prediction may have been a little premature. But those “baseball men” are still working on it. Give them a little more time.