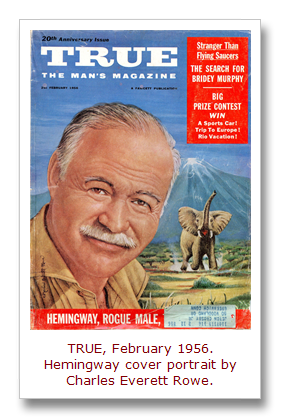 This week, two things reminded me of one of my favorite books of the past year, All Man! – Hemingway, 1950s Men’s Magazines, and the Masculine Persona by Dr. David M. Earle.

The first reminder was a the copy of the February 1956 issue of TRUE magazine that I bought on eBay.

It’s the 20th Anniversary Issue of TRUE and it features a great cover painting of Ernest Hemingway by artist Charles Everett Rowe. 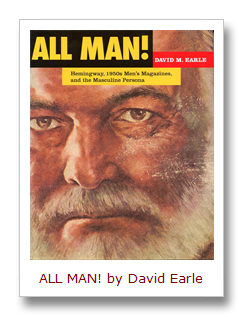 Rowe’s portrait goes with a “bonus book-lengther” about Hemingway, who was at the height of his fame at the time.

On the cover, this story is promoted with the title “HEMINGWAY, ROGUE MALE.” (I assume that’s supposed to be a rogue male elephant in the background of Rowe’s painting.)

Inside, the story is titled “WHO THE HELL IS ERNEST HEMINGWAY?”

The subtitle blurb on the story’s first page describes it as: “An astonishing and intimate portrait of America’s great soldier of fortune by his friends and his enemies: Sidney Franklin…Marlene Dietrich…Leonard Lyons…John O’Hara…Spruille Braden…Robert Capa…Mary Hemingway…Edward Scott… and many others.”

“The guy grinning crookedly at you from this month’s cover portrait is, I think, a fitting symbol for this TRUE milestone. Of all men, living or dead, Ernest Hemingway stands for much of what we, at TRUE, admire. Hemingway represents a hairy-chested maleness, an irreverence for the conventional, a dislike of the traditional. He is, truly, a rogue male.

Hemingway’s world is inhabited by beautiful dames (Ingrid Bergman, Ava Gardner, Marlene Dietrich and four wives, to mention a few). It is also inhabited by rugged guys: boxers, baseball players, soldiers-of-fortune (and misfortune). Hemingway hobnobs with nabobs — and bums. Hemingway hunts big game in Africa, catches big fish in the Caribbean (and drinks like them, too), and is a roving reporter of the violence of our times — from wars to bullfights.”

That’s actually a good description of the Ernest Hemingway’s image in the minds of many editors and readers of men’s adventure and bachelor magazines in the 1950s. It was a larger-than-life persona that was part real, part myth, part PR and part BS. 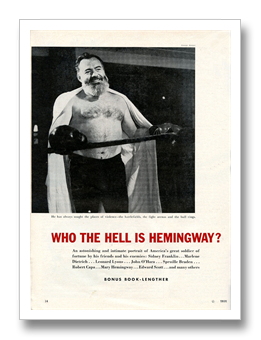 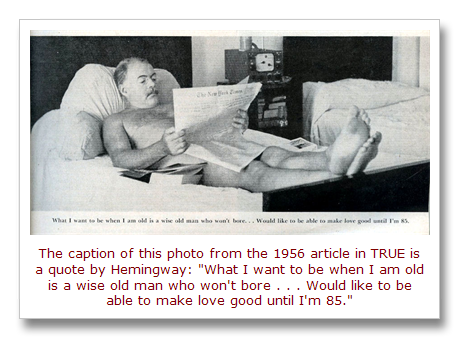 Looking back on the cultural attitudes of mid-20th Century America, it seems fitting that Ernest Hemingway’s public nickname was “Papa.”

He was the über-Dad of the Fifties, the iconic he-man who showed us guys how to be manly, through his writings, his lifestyle, his exploits and his image.

Six years after the 20th Anniversary Issue of TRUE was published, “Papa” Hemingway killed himself with one of the shotguns he had used to kill big game. His final wife, Mary, initially claimed it was an accident. But it was soon revealed to be suicide.

Most of the many stories about and by Hemingway that appeared in men’s bachelor and adventure magazines were published in the decade before his death and the few years after.

Dr. David Earle’s fascinating book All Man! traces the development of Hemingway’s public persona as viewed through the lens of those magazines.

The second thing that reminded me of that book this week was seeing a TV interview with Earle that was posted on his All Man! Facebook page.

It’s a half hour show done for WSRE. That’s the local PBS affiliate in Pensacola, where Earle teaches courses on modern literature at the University of West Florida.

During the course of the interview, Earle provides an interesting overview of the facts and insights about Hemingway, American culture and vintage men’s magazines that are in All Man!

I’ve posted a link to the show at right for your viewing enjoyment.

And, in case you missed the older posts on this blog that are based on my own interview with Dr. Earle, here are links to those…

An interview with David M. Earle, author of the new book All Man! Hemingway…

By the way, I was unable to find any information about artist Charles Everett Rowe except for a few mentions of the fact that he painted the Hemingway portrait for the February 1956 issue of TRUE. If you know anything about him, please drop me a line.