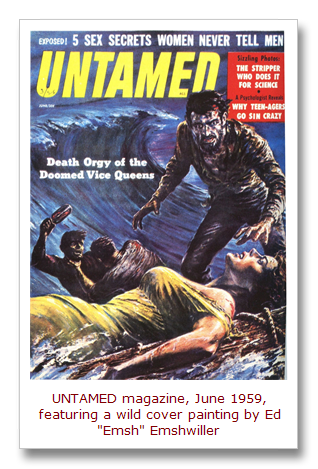 If you’re a fan of vintage science fiction magazines and paperbacks from the 1950s and 1960s, you’ve almost certainly seen cover art by Ed Emshwiller (1925-1990), who often signed his illustration art as “Emsh.”

He also did dust cover art for science fiction hardbacks and cover paintings for sci-fi paperbacks, including some of the great Ace Doubles and the “Science Fiction Library” paperbacks published by Lancer Books.

During the Fifties and Sixties, Emshwiller also provided artwork to mystery and detective periodicals, like Ellery Queen’s Mystery Magazine, and to at least six men’s adventure magazines, including Lion Adventures, Man’s World, See for Men, Sportsman, True Action and Untamed. 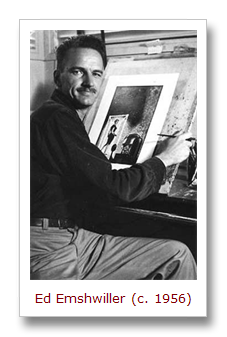 Some of my favorite Emsh cover paintings are those he did for the men’s adventure magazine Untamed.

Magnum was owned by Irwin Stein, who founded Lancer Books with Walter Zacharius in 1961.

Stein and Zacharius had previously been partners in publishing the sci-fi magazines Infinity and Science Fiction Adventures and the horror mag Monsters and Things.

Lancer Books published paperbacks in many genres, but is probably best known for its science fiction and fantasy books.

Lancer released the first paperback versions of Robert E. Howard’s Conan the Barbarian stories and a number of science fiction classics by Isaac Asimov, Jack Williamson, Robert Silverberg and many other top sci-fi and fantasy authors. (One of the artists who did covers for Lancer’s Conan series was John Duillo, whose men’s adventure magazine artwork was featured in a recent post on this blog.) 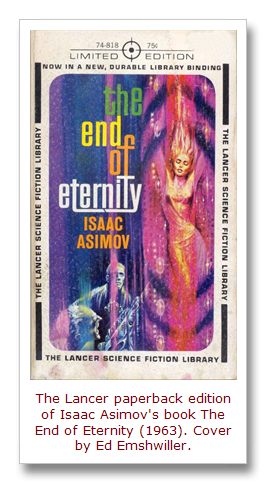 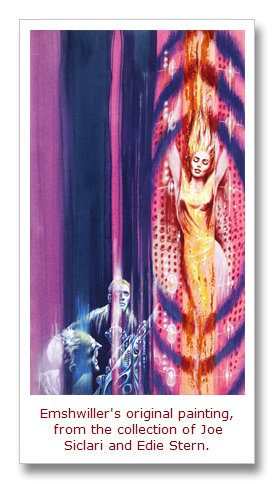 For the July 1959 issue of Untamed, Emsh painted a classic “Arab peril” cover. It shows a scantily clad, obviously thirsty damsel being menaced by a sheik carrying a bloody sword. Meanwhile, someone in the foreground is taunting the poor girl by pouring water onto the sand in front of her. (Now, that’s just nasty!) This Emsh cover painting goes with the story “Bessie Darling’s Thirty-Hour Ordeal.” 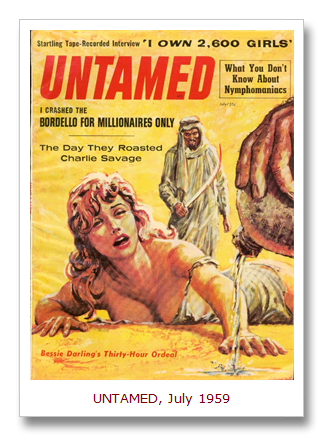 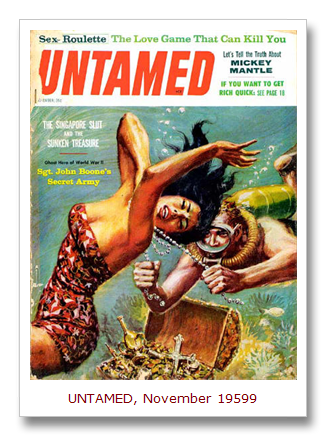 The Emsh cover on Untamed’s November 1959 issue was done for a spicy underwater treasure tale titled “THE SINGAPORE SLUT AND THE SUNKEN TREASURE.” The painting Emsh created for that one shows a scuba diver using a strand of pearls to strangle a good-looking babe (presumably the “slut”).

Emshwiller also painted the covers for the final two issues of Untamed, published in January and March of 1960.

The Emsh painting on the cover of the March 1960 issue was done for the Western yarn “HARPE’S LAST RIDE.” 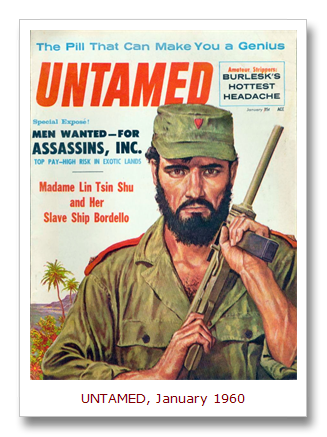 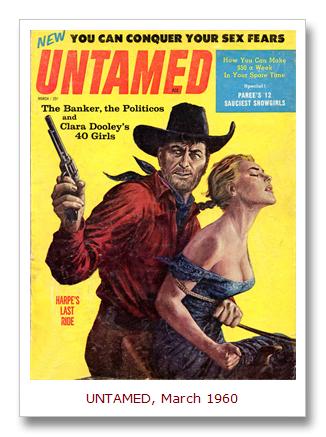 That story title seems oddly dull for a men’s pulp mag, especially given Emshwiller’s racy painting. But the story itself is pretty wild. And, inside it’s promoted with a more typical pulpy subhead: “Robbery…murder…rape…no crime was too fiendish for Micijah Harpe and his brother. When he at last was caught, he died as he had lived — horribly.” 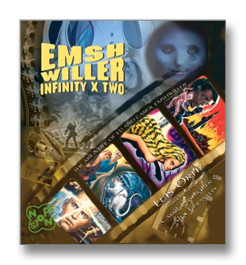 EMSHWILLER: INFINITY X TWO was written by Luis Ortiz and published by his company Nonstop Press.

Nonstop Press also published the autobiography of writer Robert Silverberg, Other Spaces, Other Times: A Life Spent in the Future.

Silverberg is best known for his science fiction stories. But in the late 1950s and early 1960s he also wrote stories for men’s adventure magazines, under his own name and various pseudonyms. I’ll be featuring some of those little-known Silverberg gems in upcoming posts.

In the meantime, you can read an extended excerpt from EMSHWILLER: INFINITY X TWO in the April 2007 issue of Earl Kemp’s fascinating online ezine, eI.

If you’re a fan of vintage science fiction or vintage erotica or both (like me), you’ll love reading Earl’s ezines. Here’s a link to the main page.

UNTAMED magazine takes us to the “Lusty Island of Lost Women”