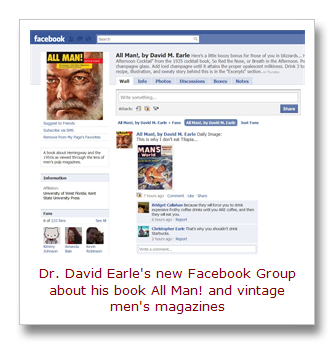 In the weeks since I posted my January interview with Dr. David M. Earle — author the groundbreaking book about Ernest Hemingway and 1950s men’s magazines, titled All Man!

— David has been busy.

He recently created a new Facebook Group for fans of All Man! and vintage men’s magazines, where he posts great new cover and interior scans every day and chats with fans and students of men’s adventure and bachelor mags.

Indeed, the students who take literature classes from Dr. Earle at the University of West Florida in Pensacola really do study post-World War II men’s magazines — as well prewar magazines.

Another outgrowth of those studies is the amazing Virtual 1925 Newsstand that David created with his students.

Among the magazines currently featured there are the men’s adventure precursor Argosy All-Story and the the spicy pulp mag Snappy Stories, which paved the way for later “girlie magazines.”

A truly cool aspect of this unique online newsstand is that, by pointing and clicking, you can actually “pick up” and leaf through copies of the magazines. (You really gotta try it.) 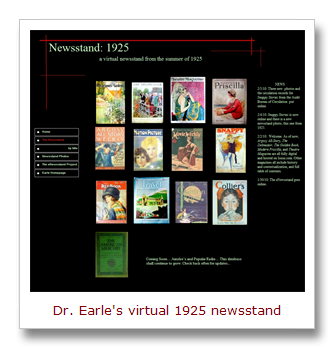 In between activities in his busy schedule, David was kind enough to answer some more questions I asked him about his book All Man! and vintage men’s magazines.

I started by asking him about a Hugh Hefner quote he cites in All Man!

In 1953, when Hef launched Playboy, he said it was a magazine for “urbane fellows who were less concerned with hunting, fishing, and climbing mountains than good food, drink, proper dress, and the pleasures of female company.”

Hefner’s quote is a pretty good description of one general difference between the vintage bachelor magazines and the men’s adventure and outdoor sport magazines, isn’t it?

EARLE: Yes. Playboy and the hundreds of bachelor magazines that followed in its wake were all about the fantasy of upwardly mobile bachelorhood, emulating the life of leisure. In contrast, the men’s adventure mags were decidedly blue collar.
Whereas the bachelor mags had articles and ads about leisure wear for a summer cruise, the men’s adventure magazines had ads for correspondence schools and offered stories and articles that confirmed masculinity in a different way — not by constructing a fantasy bachelor’s world, but by showing man in perilous and extreme situations, triumphant. And, again, the locals of these were as far away from the pressures of suburbia and the day-to-day job pressures as possible.
So, I guess if I had to really draw a reason behind the distinction between the bachelor and men’s adventure genres, I’d say it is economically based, though of course neither readership was mutually exclusive. 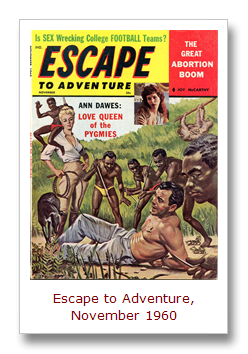 What do you think men’s adventure magazines tell us about the changes taking place in gender roles during the 1950s and 1960s?

EARLE: Wow. Huge question. Really, what we see in the men’s adventure mags is the other side of the pressures on women to conform to a social role reflected in the domestic magazines of the day, like Good Housekeeping, etcetera. In both cases, these magazines offered very extreme, very conservative roles for men and women. The most obvious reason for this, at least in the case of the women’s magazines, was a pressure to get women back in the kitchens after their empowering work in factories during World War Two. But it was also the economic and suburban boom that put pressure on having a family in the years after the war.
Of course the men’s magazines are very, very extreme in their portrayal of gender roles. Whereas women’s magazines advertised the love of an “all pink” kitchen and men as the master in the house, men’s magazines fought a fear that American suburban culture was too feminine, and was feminizing the men. And while these magazines are incredibly fun, they also often have a really troubling misogyny in them. Jem, a bachelor magazine called “the magazine for masterful men,” is perhaps the worse, but some of the adventure mags aren’t too far behind. That’s why there are so many stories in them about dangerous women: the dominatrix female Nazi guards and Amazon women — like the “Love Queen of the Pygmies” story you recently featured on your blog. At the same time, it’s why there are also many stories of women in peril who are helpless or just sex objects, hence having a man save them in the story confirms masculinity. 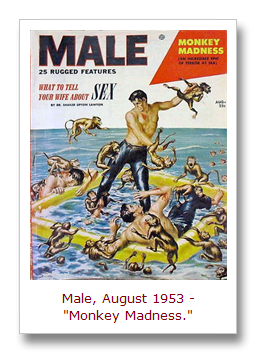 You obviously read a lot of men’s adventure magazines in your research. Do you have any special favorites?

EARLE: Sure. One very specific favorite is the December 1961 issue of Man’s Magazine that features a James Joyce short story in it, “Two Gallants.” The idea of Joyce appearing in a men’s adventure magazines is great. It’s shocking to many academics and wonderful for my argument that high-brow literature was available across class and culture lines. In fact, I start my first book, Re-Covering Modernism, with that cover.
I also love the September 1959 Man’s Magazine that features the story “Hemingway’s Private War with Adolf Hitler.” It really exemplifies what these magazines and popular culture as a whole were doing with Hemingway’s image, confusing his fiction with the real man.
And I of course love magazines like the August 1953 issue of Male, which features “Monkey Madness” — three guys in a life raft being attacked by hundreds of monkeys. It’s just so ludicrous.

Could you tell us something about your college classes and projects that deal with vintage men’s magazines?

EARLE: Love to. I often use magazines as a teaching tool, not only because that is where my own interest is, but because magazines really convey the time and place to an audience — my students — who often have very little sense of history. There are so many voices in magazines, whether authorial, editorial, artistic, or advertising, that teach about the time and place. This is especially true and effective with men’s magazines because of their extreme sensationalism. They are kitschy, attractive, but still show deep rooted cultural tensions about class and gender. So they are great teaching tools. My two classes that rely on magazines the most have been a class that digitally recreated the 1925 newsstand. 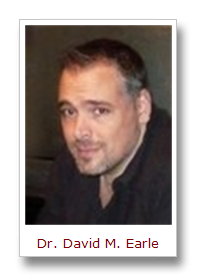 I also teach a 1950s Masculinity class where students “read into” a men’s magazine from the 1950s and create a group of essays and webpage for it. Initially I have them read some great books like Man in the Grey Flannel Suit, Casino Royale, Donald Hamilton’s first Matt Helm book Death of a Citizen, and Graham Greene’s Our Man in Havana. Stuff like that. Then the students take the themes we’ve discussed and write about them in regards to the men’s magazines. I divide them into “suburban mag,” “bachelor mag,” and “adventure mag” groups. It’s fun and I think really effective.

What kind of reactions to your book are you getting from current fans of Ernest Hemingway and men’s adventure magazines?

EARLE: The reaction from academics to presentations I’ve given on the material has been overwhelmingly positive. There are a few traditionalists in Hemingway studies who snub it, but that’s because I’m saying pretty controversial stuff, such as Hemingway tried to be a pulp writer before he discovered Modernism at the hands of Gertrude Stein, Ezra Pound, and Sherwood Anderson. Plus I am presenting the popular Hemingway, which has always been opposed to the academic Hemingway. But they’ll come around. I mean, the evidence and fascination of Hemingway in the men’s mags and gossip magazines is incontrovertible.
The reaction from the pulp audience has been fantastic — your blog for example. This is all the more gratifying, since pulp fans are exhaustive in their research. I also think that they know that academic attention to this genre is way, way overdue.

Thanks, David. I look forward to talking with you again soon — and urge readers of this blog to check out your books and online projects.

Talking about Ernest Hemingway, then and now…