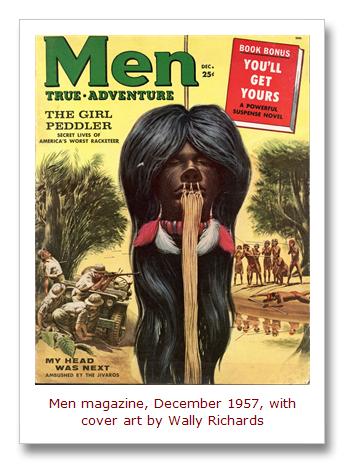 Headhunters and shrunken heads were popular topics in men’s adventure magazines of the 1950s and 1960s.

In a recent post, I featured a wild “head on a stick” headhunter cover, from a 1958 issue of For Men Only magazine.

Today’s post features a shrunken head cover, with a painting done by a great artist.

It’s on the December 1957 issue of Men magazine, published by Zenith Publishing Corp., another publishing entity owned by the legendary founder of Magazine Management and Marvel Comics, Martin Goodman.

And, yes, I really do mean this shrunken head cover art was done by a great artist.

He’s credited as Wally Richards in the magazine. His full name is Walter DuBois Richards and he was a highly talented and respected American artist who died in 2006 at the age of 99.

As a young man, Richards studied at both the Cleveland School Art and the Art Institute of Chicago. By the 1930s, his prints and watercolors were being shown in many fine galleries and museums around the country.

He was a prominent member of the Cleveland Print Makers Print-A-Month-Club, an organization that was dedicated to keeping the market for fine art prints alive during the Great Depression. (Hence helping artists stay alive.)

From the mid-1930s on, Richards provided illustrations for ads, as well as cover paintings and interior art for a long list of magazines, including Life, Look, Colliers, Argosy, Readers Digest, Outdoor Life ­­­­— and many men’s adventure magazines.

Richards was a co-founder of the Fairfield Watercolor Group. In the 1950s, he became the official painter for the U.S. Air Force. He also created the artwork used for 37 stamps issued by the U.S. Postal Service. One of the most popular is the stamp showing Frank Lloyd Wright’s “Fallingwater” house in Mill Run, Pennsylvania, issued as part of the series commemorating great architecture. 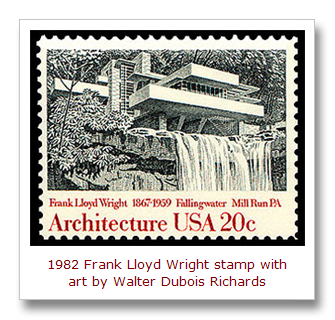 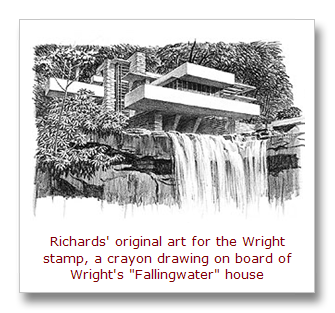 When I showed my wife my copy of the December 1957 issue of Men magazine and told her the shrunken head cover painting was done by a great artist, she gave me the usual look she gives me whenever I show her one of my men’s mag treasures. In words, the look would be translated as: “Sure, honey, whatever. Enjoy your little hobby collecting those weird old magazines, but don’t expect me to appreciate that bizarre stuff.”

Walter DuBois Richards was married to Glenora Case Richards. Glenora, who died in 2009, was herself a famous artist, known for her “miniaturist” paintings, stamp designs and portraits.

I wonder what look Glenora gave Walter when he showed her the shrunken head painting he did for Men magazine.