Christmas covers and stories were not common in the men’s adventure magazine (MAM) genre.

In the 1950s, a few of top tier MAMs, like ARGOSY, TRUE and SAGA, did have annual Christmas-themed covers. I’ve featured examples in previous posts here.

But holiday cheer was a bit out of sync with the character of most other MAMs.

I have tried to imagine what Christmas covers on those other men’s adventure mags might look like.

And, with the help of Photoshop, I’ve created some just for fun.

I recently posted old and new examples in the Men’s Adventure Magazines & Books Facebook Group, where I do more frequent posting than I do on this blog. 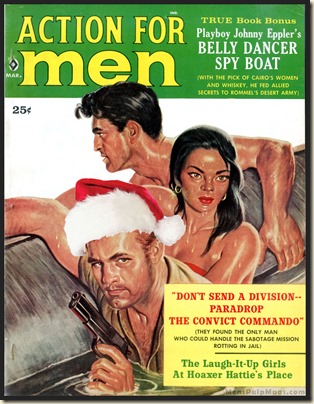 Some of my favorite Christmas spoof covers are shown here.

The example at top left is my Christmas version of the cover of MAN’S LIFE, January 1954.

For it and many of my other faux Christmas covers, I used the face of Santa as depicted by  artist Haddon Sundblom.

Sundblom did paintings of Santa Claus for widely-seen Coca-Cola advertisements from 1931 to the mid-1960s.

They played a key role in popularizing what is now the traditional image of a white-bearded Santa.

The amazingly colorful scene I inserted Sunblom’s Santa into on the cover of MAN’S LIFE was done by John Fay.

At right is a Christmas-cized version of the cover of ACTION FOR MEN, March 1960. Cover art by Rafael DeSoto.

I imagine the guy with the Santa Claus hat thinking: “Maybe those headhunters who are chasing us won’t chop off my head and turn it into a tsantsa if they see me wearing this hat and think I’m Santa.”

Below, with apologies to the artists and Santa Claus, are some more Christmas spoof covers I’ve made.

In my holiday version of the cover of AMERICAN MANHOOD, January 1953, there’s a ripped, bare-chested Santa carrying a Tommy Gun.

The original cover artwork for that one was done by a little-known pulp and men’s adventure magazine artist named Peter Poulton.

Next to that is my Christmas version of the cover of ADVENTURE, June 1957, showing a knife-wielding Santa in an iconic MAM painting by Mort Künstler.

Then there’s my G.I. Santa on the cover of BLUEBOOK, July 1971, with cover art by Mel Crair.

In that one, St. Nick is carrying a bazooka. 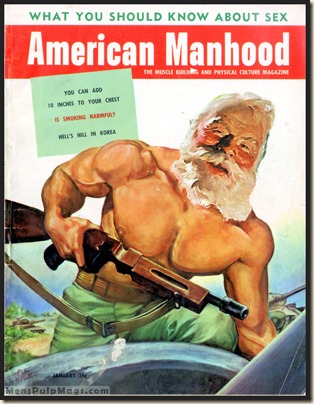 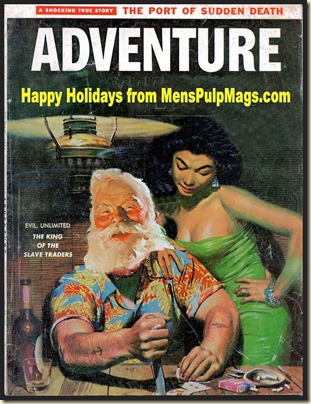 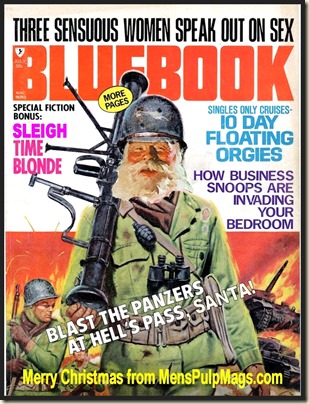 Next up is a Christmas spoof made from the classic “WEASELS RIPPED MY FLESH!” cover of MAN’S LIFE, September 1956. (Cover art by Wil Hulsey.) I think it was the first one I created, back in 2012, when the story anthology of the same name was released as the first book in the Men’s Adventure Library series I co-edit with Wyatt Doyle.

The original cover paintings for the covers of MAN’S STORY, April 1974 and MEN TODAY, July 1964 were both done by Norm Eastman.

And, in both cases, Norm used my friend Eva Lynd as the model for the damsels being distressed by the Nazis — or, in this case, the Nazi Grinch. (By the way, there are still about a dozen copies of the 2019 Eva Lynd Calendar available on eBay. You can see a preview of it in my previous post.) 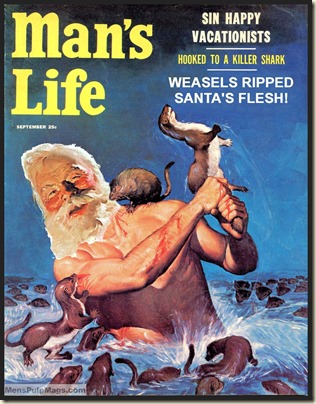 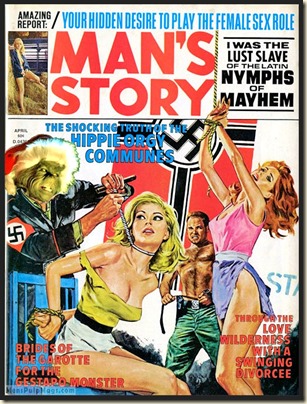 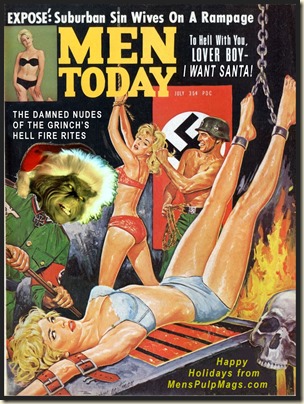 The biker on the cover of MEN, April 1969 looks almost festive in the Santa hat I Photoshopped onto his head. (Cover art by Earl Norem.)

And, Santa, inserted on the cover of SAGA, May 1959, looks pretty dashing as a pirate. (Cover art by Thomas Beecham.)

Given that many men’s adventure magazines feature “killer creature” artwork and stories involving highly unlikely man-killers, I decided to see what an attack by Rudolph the Reindeer would look like. I used the cover of SPORT LIFE, December 1955 for that one. (Cover art by Mort Kunstler.) 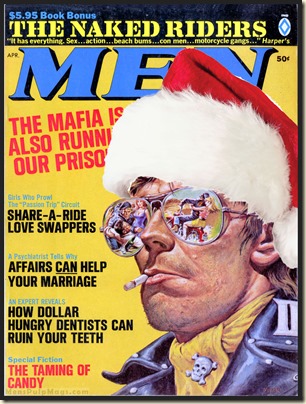 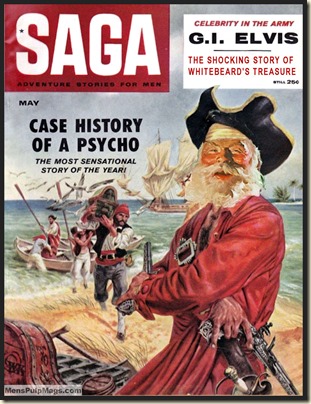 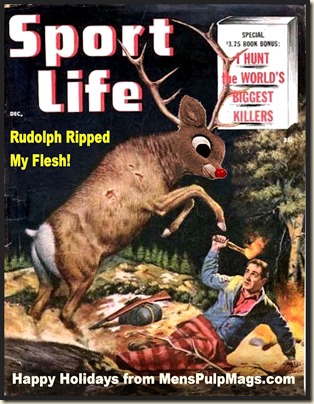 “White Kings” being worshipped by awed islanders is another common trope in MAM stories and illustrations. That trope led me to create the Christmas version of STAG, April 1958. (Cover art by James Bama.)

And, finally, here’s Santa inserted onto the cover of our collection of MAM animal attack stories and artwork I WATCHED THEM EAT ME ALIVE.

That gonzo coconut crab attack scene, painted by George Gross, was originally used on the cover of MAN’S CONQUEST, November 1956. 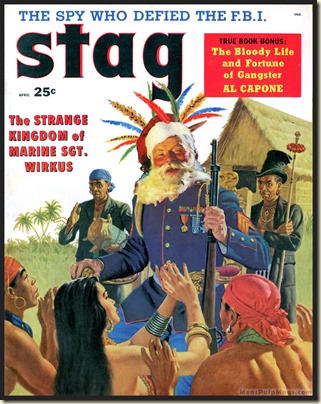 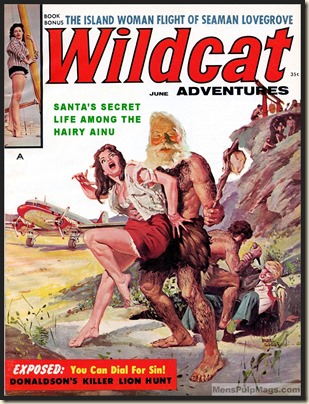 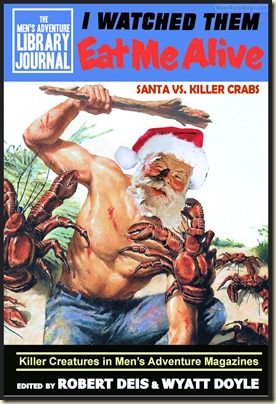