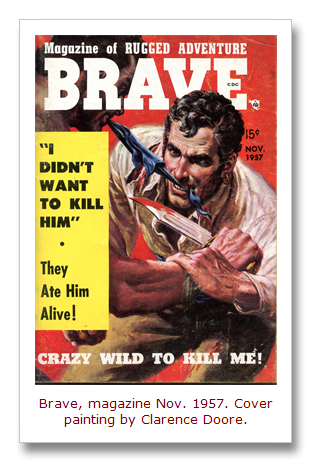 In Volume 2 of her excellent 6-Volume History of Men’s Magazines, Dian Hanson notes:

“A curiosity of the 1950s was a number of American men’s lifestyle digests that…combined all the elements of the era’s men’s magazines, including sports, pin-ups, scandal, men’s adventure, detective stories, human oddities and slapstick photo stories in a pocket-sized package costing less than a quarter.”

These little men’s magazines are smaller than the digest-size pre-World War II pulps. 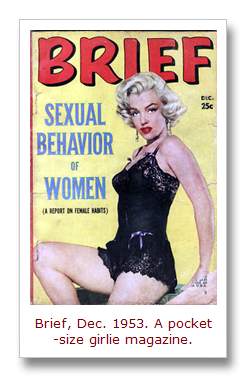 Most of them — such as Brief, He, Picture Digest, Sensation, Slick and Tempo — are risqué girlie magazines.

But, in 1957, at least one pocket-size men’s adventure magazine was published: Brave, the “Magazine of RUGGED ADVENTURE.”

The editor of Brave was a prolific writer named Walter Kaylin. To the extent he is still known today, it’s primarily as the creator of hundreds of stories for vintage men’s magazines. [UPDATE: A while after I originally posted this entry, I tracked Walter down and talked with him by phone. Excerpts from that conversation are in some of my subsequent posts about stories written by Kaylin under his own name or his favorite pen name, Roland Empey.]

The famous author and playwright Bruce Jay Friedman, who once edited men’s adventure mags for Martin Goodman’s Magazine Management company, has called Kaylin one of his favorite writers.

Puzo worked with Josh’s father as a staff writer and Associate Editor at Magazine Management before he became famous as the author of The Godfather. Mario told Josh:

“He [Kaylin] was great! He wrote these great adventures, but he couldn’t turn them out that fast. He was outrageous, he just carried it off. He’d have this one guy killing a thousand other guys. Then they beat him into the ground, you think he’s dead, but he rises up again and kills another thousand guys.” 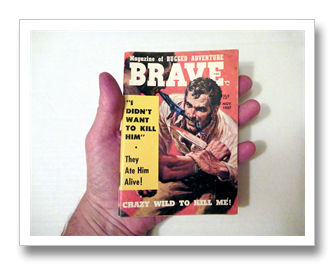 Given the high regard editors had for Kaylin, it’s somewhat surprising that you don’t find much about him on the Internet. There are the comments I just mentioned, scattered listings of articles Kaylin wrote for men’s bachelor and adventure magazines and the few novels he wrote, a note on the Mystery File blog saying that he once lived in Old Lyme, Connecticut. That’s about it.

Josh Alan Friedman has called him “the legendary, though untraceable Walter Kaylin.”

With this post, I am adding to the body of Kaylin lore the fact that he edited the short-lived, pocket-sized men’s adventure magazine Brave.

From what I can tell, only three issues of Brave were published, all in 1957. And, based on the one copy of Brave I have, which is the November 1957 issue, Kaylin had a firm grasp of how to put together a classic men’s pulp mag.

The cover features a rousing painting by the great pulp artist Clarence Doore, showing two bloodied men in a manly knife fight. It goes with the story inside titled “I DIDN’T WANT TO KILL HIM.”

There’s also a rip-snorting yarn about a bloodthirsty wolf, “Crazy Wild to Kill Me,” and an Amazonian adventure with flesh-stripping piranhas, delicately titled “We Saw Them Eat Him Alive.” 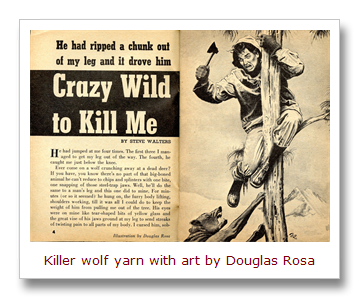 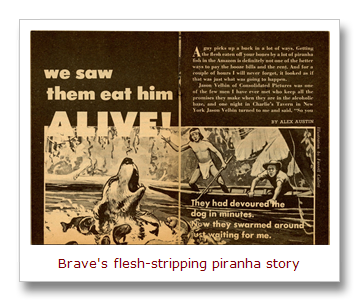 The November ‘57 issue of Brave also has some interesting non-fiction articles, including a gripping article about Algerian rebels written by journalist Peter Throckmorton.

This article is actually a bit of 1950s world history.

In the winter of 1956-57, Throckmorton and fellow journalist Herb Greer were the first Western journalists to provide first hand reports on the Algerian Armée de Libération Nationale (ALN), the rebel troops fighting to win Algeria’s independence from France during the Algerian War. 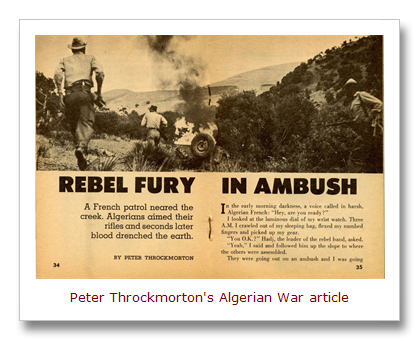 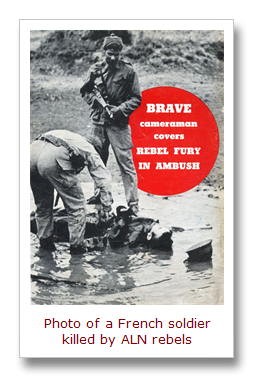 Throckmorton and Greer generated worldwide news by photographing and filming ALN training camps and by embedding themselves with ALN guerillas during their raids on French troops. Throckmorton’s article in Brave magazine documents — in words and graphic photos — an ambush in which two French soldiers were killed.

Stories like this by Throckmorton and Greer infuriated the French government, because they showed the Algerian rebels were well-organized and portrayed them in a fairly sympathetic light, rather than as “terrorists.” A few years later, in 1962, the French gave up the fight and Algeria gained its independence.

Of course, like other men’s adventure magazines, Brave careened from real and fictional blood and gore to scantily clad babes. In this case, the cheesecake part of the old sex-and-violence formula was pretty corny. 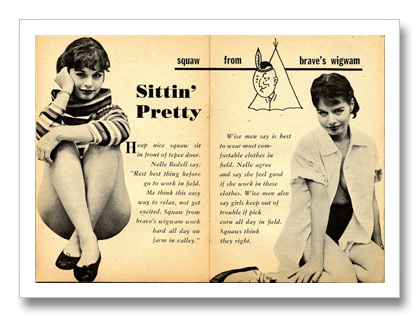 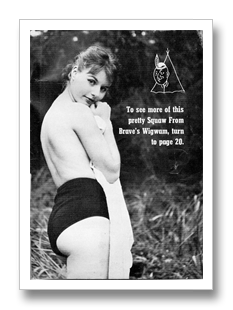 For example, shots of the model in the “Squaw from Brave’s Wigwam” photo spread are accompanied by a cartoon Indian who makes silly comments about her in Tonto-style pidgin English.

But aside from this cheesy cheesecake, Brave is actually a better than average men’s adventure magazine that packs a lot in a pocket-size package.

If you’re lucky enough to spy a rare copy of Brave on eBay, you should try to snag it. Of course, you’ll probably have to outbid me.