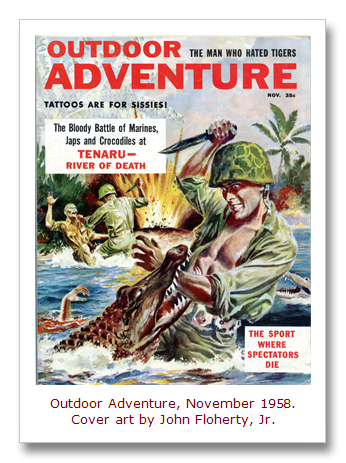 This past weekend, I got an email from Nick Colella, a tattoo artist at Chicago Tattoo, Illinois’ oldest tattooing studio.

Nick was looking for an issue of Escape to Adventure that had an article about the legendary tattooist, Gibb “Tatts” Thomas.

I haven’t seen that one. However, I did recently read another article about tattoos in a men’s pulp mag — the November 1958 issue of Outdoor Adventure (Vol. 4, No. 3).

The article is provocatively titled “Tattoos are for Sissies.”

It was sort of a hybrid between a typical men’s pulp magazine and Outdoor Life, combining hunting and fishing adventure yarns (as opposed to how-to articles) with war stories, cheesecake photos, exotic adventure tales and exposé-style articles like “Tattoos are for Sissies.”

Based on that article’s silly title, I thought it might be a humor piece before I read it. 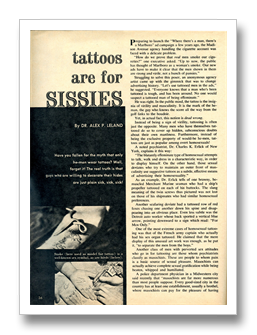 In fact, it’s a seemingly serious article written by “Dr. Alex P. Leland.” The author may or may have been someone named Alex P. Leland or a doctor. In vintage men’s pulp mags, the names of the authors of racy articles and their supposed professional titles were sometimes fictitious.

“Dr. Leland” explains that tattoos were commonly viewed as “the insignia of virility and masculinity” in the 1950s. Then he drops the first bombshell:

“Yet, in actual fact, this notion is dead wrong.

Instead of being a sign of virility, tattooing is often just the opposite. Many men who have themselves tattooed do so to cover up hidden, subconscious doubts, about their own manliness. Furthermore, instead of being the exclusive property of would-be he-men. tattoos are just as popular among overt homosexuals!”

It gets worse (or better, depending on how much you like campy, politically incorrect stuff).

“The blatantly effeminate type of homosexual attempts to talk, walk and dress in a characteristic way, in order to display himself. On the other hand, those sexual deviates who try to maintain an outer front of masculinity use suggestive tattoos as a subtle, effective means of advertising their homosexuality.” 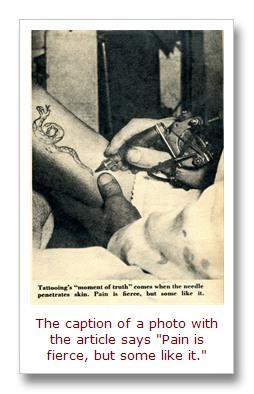 Want some examples? Of course. Here ya go…

“As an example, Dr. Erlick tells of one brawny, bemuscled Merchant Marine seaman who had a ship’s propeller tattooed on each of his buttocks. The slang meaning of the twin screws thus pictured was not lost on those of his shipmates who had similar homosexual preferences.

Another seafaring deviate had a tattooed row of red foxes chasing one another down his spine and disappearing into an obvious place. Even less subtle was the Detroit auto worker whose back sported a vertical blue arrow, pointing downward to a sign which read: ‘For Men Only.’”

The article continues to provide examples of other “deviants” who like tattoos, including masochists, female prostitutes, insecure men suffering from “Don Juanism” and guys who get off on having their “organ” tattooed by female tattoo artists.

Oh yeah, about those girl tattooists…

This is pretty wild stuff and I don’t know enough about the history of tattooing to know how much is true. But the article get’s even wilder than that.

You can find out how wild by reading it yourself. Just click this link to download the entire article, plus the great cover, in PDF format. 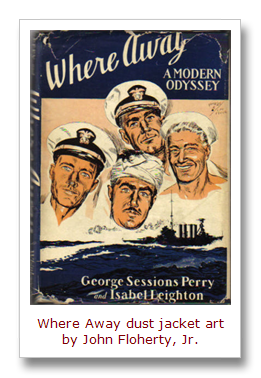 By the way, the cover painting used for the November 1958 issue of Outdoor Adventure, showing a G.I. fighting off an attacking crocodile with a knife, was painted by the artist John Floherty, Jr. (1907-1977).

Floherty was an illustrator, commercial artist, cartoonist and painter who had studios in New York City and Northport, Long Island.

In the 1930s and 1940s, he provided many illustrations for mainstream magazines, such as Colliers and Liberty.

One of his works, titled “Where Away,” was used for U.S. Coast Guard recruiting posters.

Floherty’s art was also used for a number of paperback book covers and hardback dust jackets, including the dust jacket for a 1944 book about the U.S.S. Marblehead that’s also titled Where Away. (I’ll bet some of the guys in that dust jacket illustration had tattoos.)

Floherty’s cover for Outdoor Adventure is the only example of his art I currently have in my men’s pulp magazine collection. Men’s adventure art expert and collector Rich Oberg told me Floherty did relatively little work for the men’s adventure genre.

By the way, if you think Floherty’s croc attack cover painting is cool, wait until you see the incredible original animal attack cover art that Rich sent me photos of recently. I’ll be featuring them in my next post.