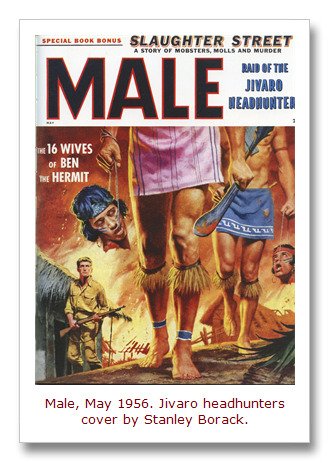 In my previous post, I featured a cool shrunken head cover by the great artist Wally Richards (aka Walter Dubois Richards).

The headhunter story Richards’ cover art was done for was about the once notorious Jivaro Indians of South America, who call themselves the Shuar and now help lead the fight to save the Amazon rainforest from destruction.

At left is another wild Jivaro headhunter cover by another excellent artist, Stanley Borack (1927-1993).

It was done for the story “RAID OF THE JIVARO HEADHUNTERS,” published in the May 1956 issue of Male magazine.

Like Wally Richards and many other artists who worked for men’s adventure magazines of the 1950s, 1960s and early 1970s, Stan Borack painted covers and interior art for many types of magazines and books.

In his later years, he moved away from doing cover art to focus on Western paintings that still sell for hefty prices in fine art galleries.

There’s a good bio of Borack on the site Field Guide to Wild American Pulp Artists, created by artist and author David Saunders, son of the legendary artist Norman Saunders.

David’s Pulp Artists site one of the best places on the Web to learn more about artists who worked for both the classic pre-World War II pulp magazines and the postwar men’s adventure pulp magazines.

Borack’s Jivaro headhunter cover is one of my favorites of his.

I also love the painting he did of a lone man on a life raft surrounded by sharks. It was used for both the cover of a book — Raft of Despair by Ensio Tiira (1954) — and for the cover of the December 1956 cover of Men magazine. 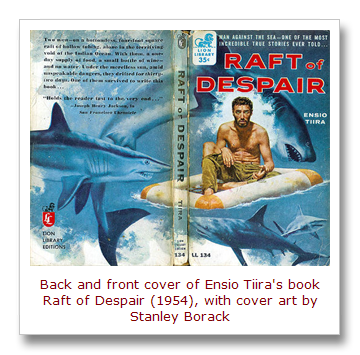 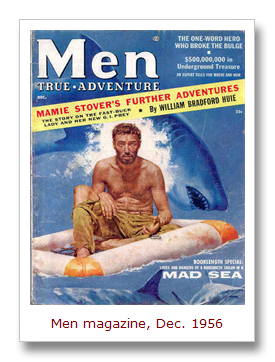 Further reading, listening and viewing about the Jivaro (Shuar) Indians…