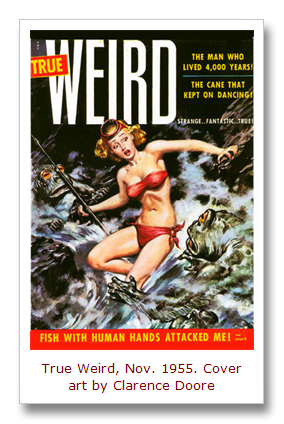 True Weird and True Strange were unusual, short-lived magazines that were like a cross between a men’s pulp mag and the Weekly World News (the wonderfully wacky supermarket tabloid that is now published online).

Both of these magazines were published by Weider Periodicals Inc., the publishing house founded by bodybuilder Joe Weider and his brother Ben.

Only three issues of True Weird were published, between November 1955 and May 1956.

True Strange lasted for seven issues, from October of 1956 to February 1958.

Both magazines featured outré, tabloid-like stories that had some sensational, supernatural, occult or otherwise weird angle.

As noted by the Taschen book Men’s Adventure Magazines: “The first True Weird had one of the best covers, an eye-catching painting by Clarence Doore of a blonde in a bikini menaced by fish men straight out of Universal Pictures’ Creature from the Black Lagoon.”

The subtitle on the covers says True Weird is “STRANGE…FANTASTIC…TRUE!” And, there’s no doubt that the first two adjectives apply.

True Strange was similar to (and might be seen as the reincarnation of) True Weird. It was promoted with the subtitle “INCREDIBLE • WEIRD • AND FACTUAL.”

The cover paintings for True Strange were done by Thomas Beecham, who later become best known as a painter of western and wildlife art. 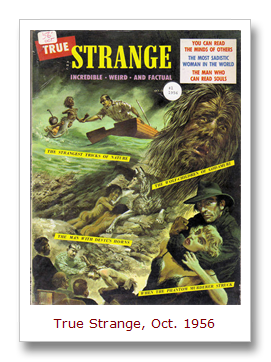 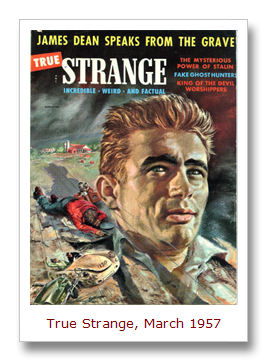 The premiere issue (October 1956) has a unique collage-style painting and includes stories like:

The March 1957 issue is one of a series of issues that featured a celebrity portrait by Beecham. In that issue, the celeb is James Dean, and the stories include: 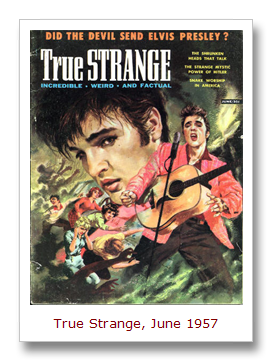 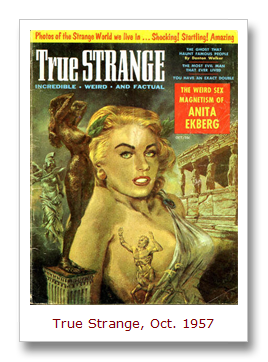 The June 1957 issue of True Strange has a terrific Elvis cover and stories like:

Beecham’s Roman-flavored cheesecake portrait of Anita Ekberg graces the cover of the October 1957 issue, which includes the stories: 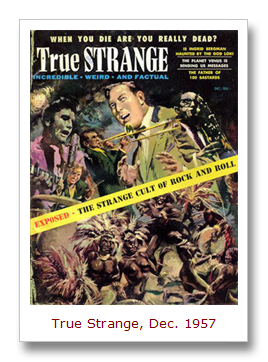 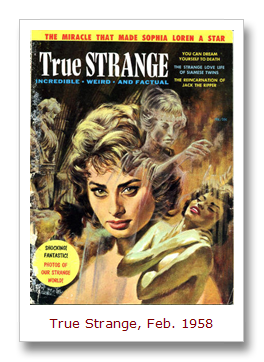 The cover of the December 1957 issue provides an interesting glimpse of the culture war over rock music in the 1950s. Beecham’s painting shows images of rock ‘n’ roll stars and musicians above a scene of dance-crazed African tribesmen — a visual reflection of the way many parents and other “squares” viewed rock music at the time. The stories included:

A lush portrait of Sophia Loren is featured on the last issue of True Strange (February 1958), along with cover lines for these intriguing stories:

In the next post, I’ll provide some background about artist Tom Beecham and some of the great work he did for other men’s adventure magazines, paperback books and the legendary Remington calendar.

In the meantime, here are some more reading recommendations for fans of pulp art…