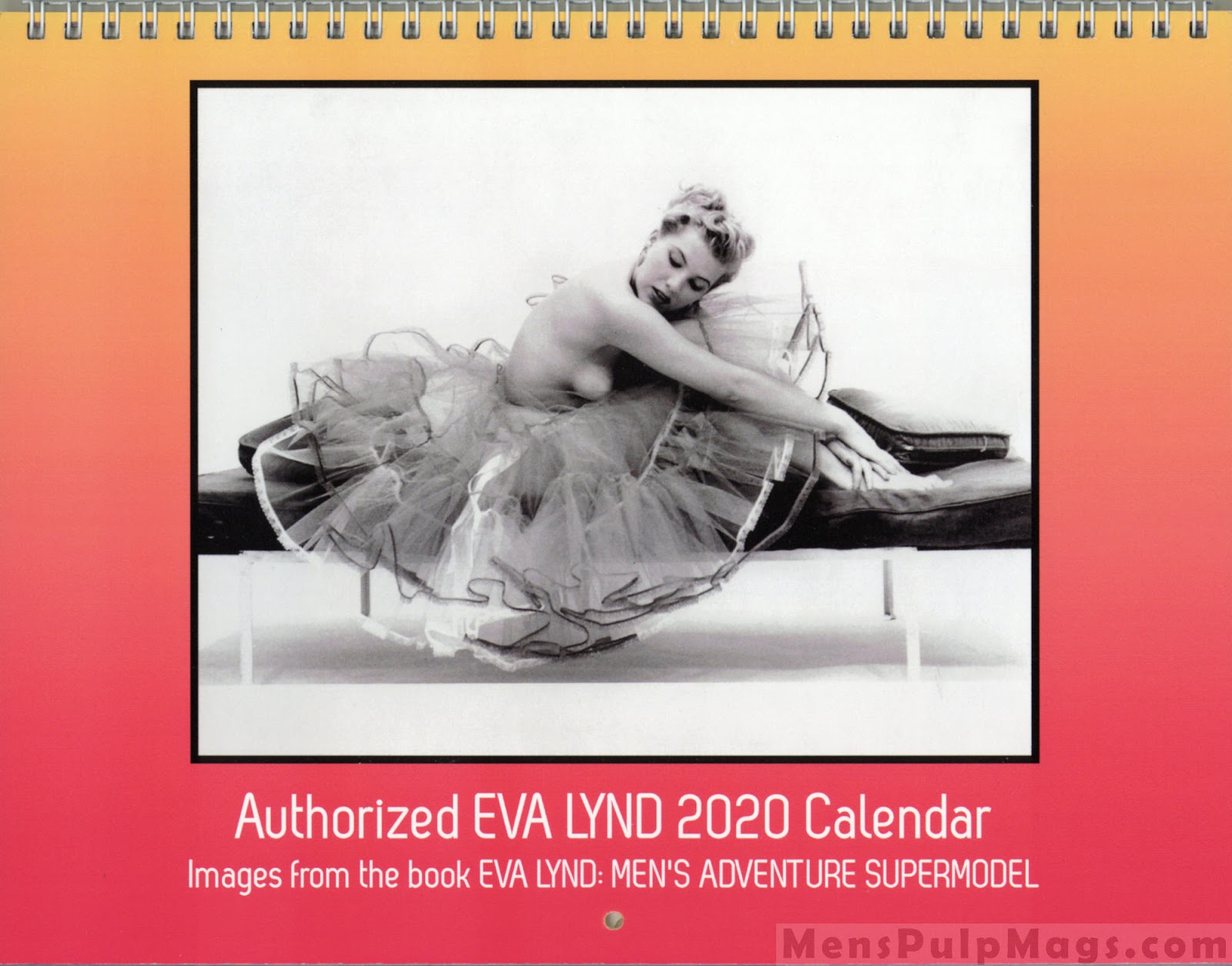 As noted in the previous post on this blog, my publishing partner Wyatt Doyle and I recently released the 10th book in our Men’s Adventure Library series.

Titled EVA: MEN’S ADVENTURE SUPERMODEL, it’s a lushly-illustrated account of the life and career of the legendary pinup photo model, artist’s model and actress Eva Lynd, told in her own words.

Now, with Eva’s permission, we’re offering a special collectible to go with the book: the Authorized 2020 Eva Lynd Calendar.

It’s a limited edition calendar featuring photographs and artwork Eva modeled for, and it’s available exclusively from me on eBay.

If you’re a regular reader of this blog, you probably know why Eva Lynd is so familiar to fans of the men’s adventure magazines (MAMs) published in the 1950s and 1960s.

She modeled for scores of classic MAM cover and interior paintings done by several of the great artists who worked for the genre: Norm Eastman, Al Rossi and James Bama.

In fact, Eva is probably the best-known female model in the men’s adventure mag realm. She often modeled together for MAM artwork with the best-known, mid-20th Century male artist’s model, Steve Holland (who was used by James Bama as the model for his famed Doc Savage paperback covers).

Eva was also one of the most popular pinup photography models of the era. Photos of her taken by top “glamour girl” photographers appeared in dozens of different bachelor magazines and MAMs and were seen by millions of men. Millions of women saw photos she modeled for that were used on the covers of or inside romance, confession, and “true crime” magazines.

Eva’s acting career began with appearances in popular comedy and variety television shows produced in New York in the late 1950s, like THE STEVE ALLEN SHOW, THE GARRY MOORE SHOW, THE PERRY COMO SHOW, THE JONATHAN WINTERS SHOW, and The Producer’s Showcase special, FESTIVAL OF MAGIC, hosted by Ernie Kovacs. 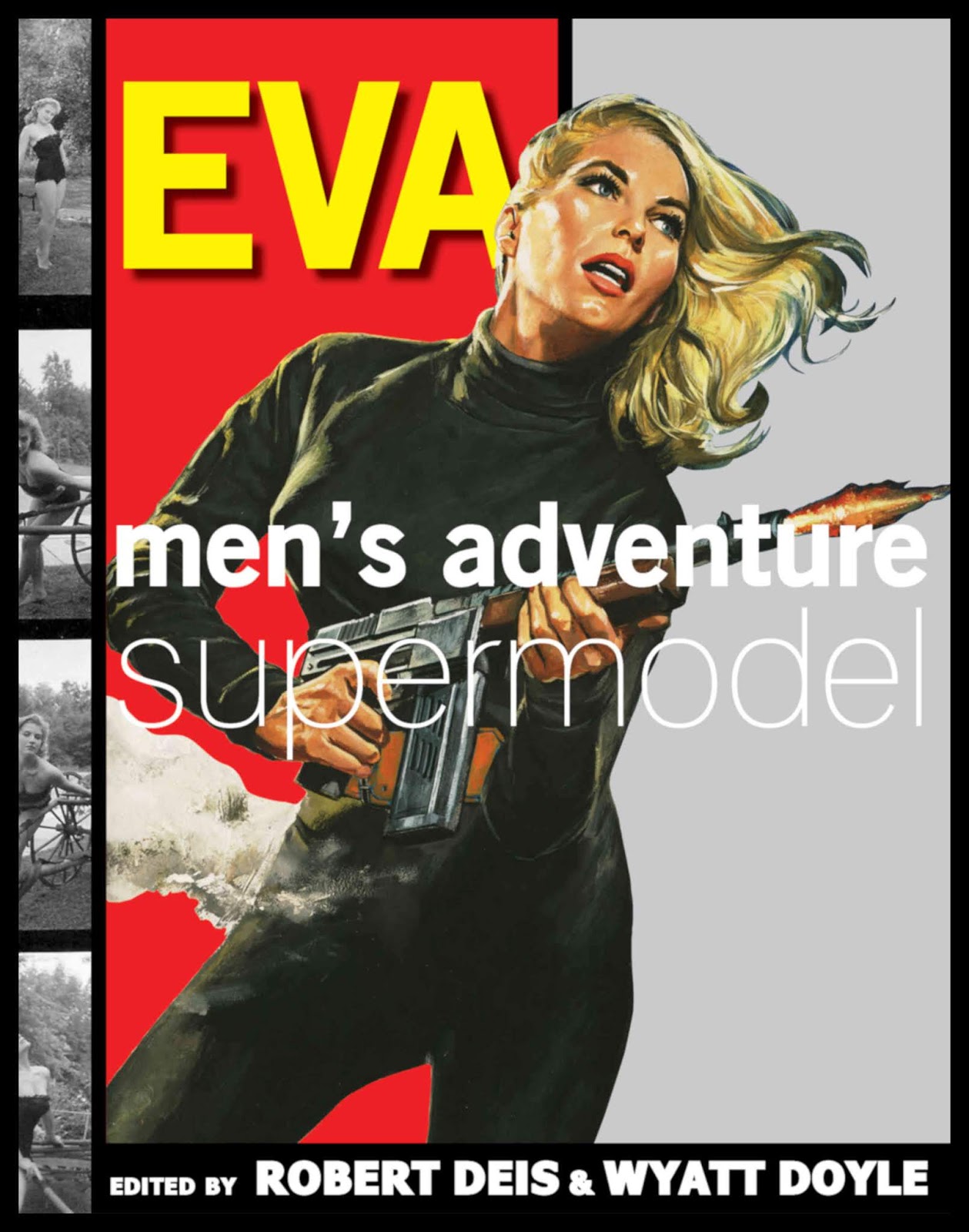 One of her most-seen roles was as the sexy woman who emerges from the tube in Brylcreem’s “Girl the Tube” TV commercial, which ENTERTAINMENT MAGAZINE named of the “50 Best Commercials of All Time.”

EVA: MEN’S ADVENTURE SUPERMODEL illuminates these and other aspects of Eva Lynd’s career with her own reminiscences, photographs from her personal archives, and hundreds of pinup photos and magazine and paperback illustrations she modeled for.

We’re pleased that the book is already getting great reviews from some notable readers. For example, click here to read the 5-star reviews posted on Amazon by novelist and blogger Dan Leo; by Michael Stradford, Executive Director of Worldwide Creative Content at Warner Bros. Pictures; and, by comics writer, novelist and publisher Ron Fortier, Captain of the mighty Airship 27 “new pulp” publishing company.

Fans of Eva and the book should also like the Authorized 2020 Eva Lynd Calendar. Here’s a rundown of the images it features…

The photo used on the calendar’s cover was taken by one of the top celebrity and glamour girl photographers of the era, Jerry Yulsman, who is probably best known for his photographs for PLAYBOY. Yulsman’s photos of Eva appeared in several men’s magazines, including men’s bachelor mags like DUDE (March 1957) and MAMs like REAL ADVENTURE (March 1958).

The image on the January page of the calendar is the cover of the softcover edition of EVA: MEN’S ADVENTURE SUPERMODEL. (In case you’re wondering, both editions are lushly-illustrated, but the hardcover edition has about 80 pages of additional content.)

The artwork on the left side of the softcover edition’s cover is from an illustration Al Rossi painted for a story in ACTION FOR MEN, May 1966. In addition to being one of the go-to illustrators for men’s adventure magazines, Rossi did many paperback covers, including some that Eva modeled for.

The photo of Eva’s face at right on the softcover edition’s cover comes from the photo of Eva used on the cover of the January 1959 issue of MODERN MAN, a pioneering bachelor mag that competed with PLAYBOY. It’s one of many photos of Eva taken by Leo Fuchs. Fuchs is particularly known for his celebrity photos, some of the best which are featured in the book LEO FUCHS: SPECIAL PHOTOGRAPHER FROM THE GOLDEN AGE OF HOLLYWOOD.

The February page of the calendar features one of the many MAM cover paintings by Norm Eastman that Eva Lynd modeled for. It’s the cover of MAN’S CONQUEST, August 1968. In some Eastman cover paintings Eva modeled for, she’s a distressed damsel being tormented by Nazis, bikers, or some other evil villains. In others, like the MAN’S CONQUEST cover and the painting used on the hardcover edition of EVA: MEN’S ADVENTURE SUPERMODEL, she’s a gun-toting, freedom fighter battling against the bad guys.

The photo on the March page of the 2020 Eva Lynd calendar was taken by the great pinup and celebrity photographer Peter Basch. It’s one of many alluring photos Basch took of Eva in the late 1950s. Some of them appeared in men’s magazines; some in Basch’s popular photography books.

The April calendar page features a cool green duotone panting by Al Rossi, used for a story in STAG, May 1957. 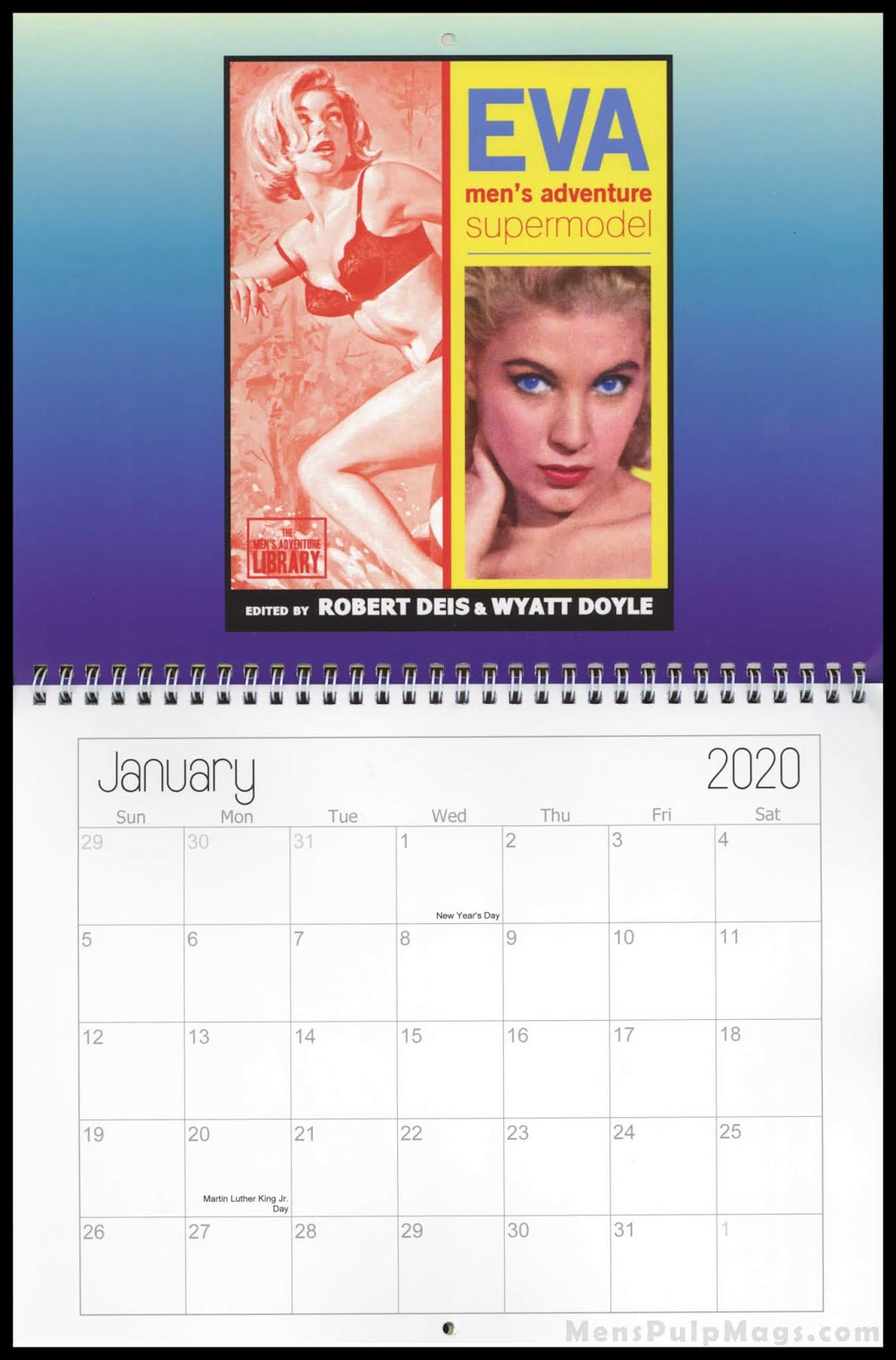 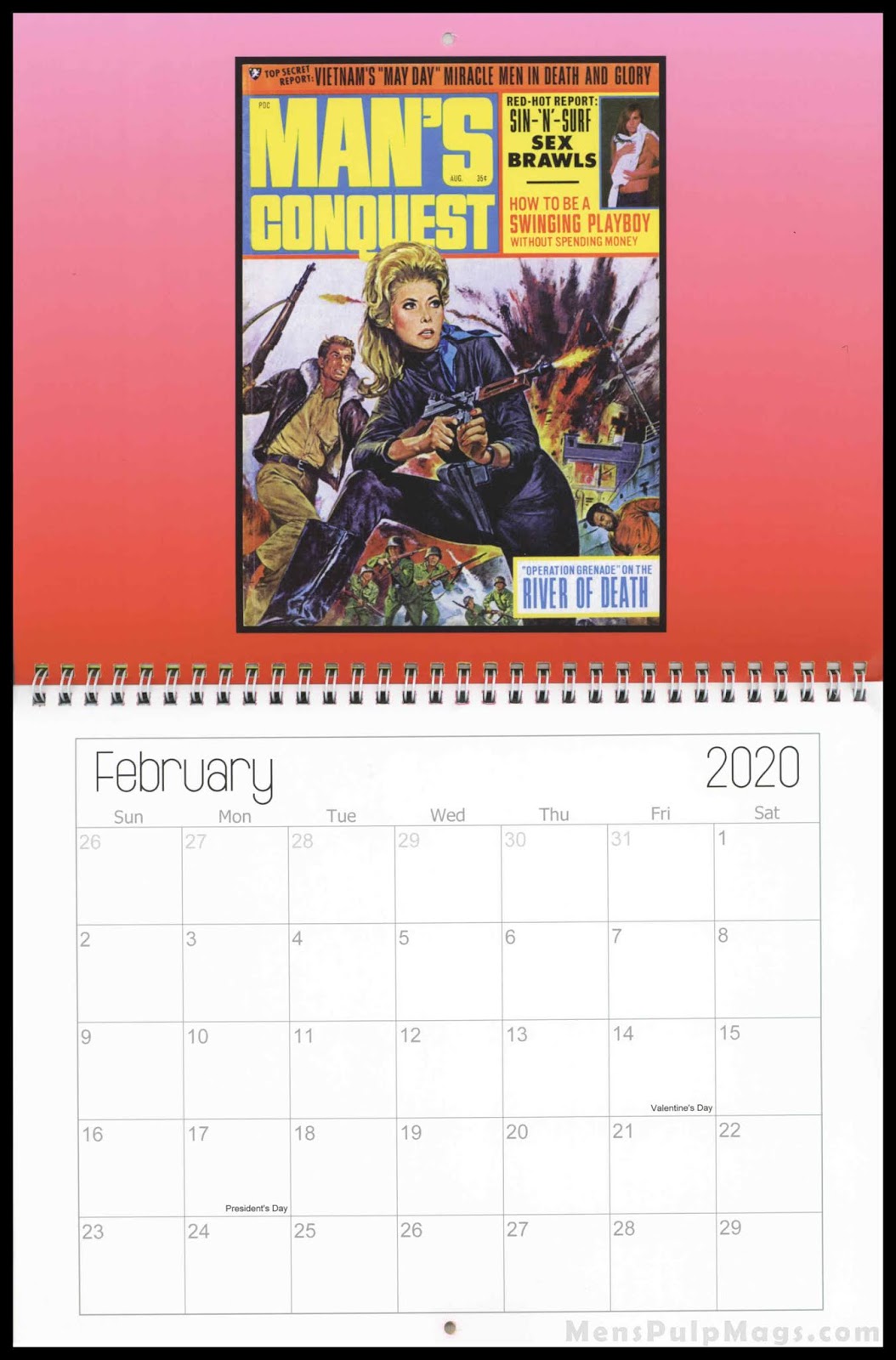 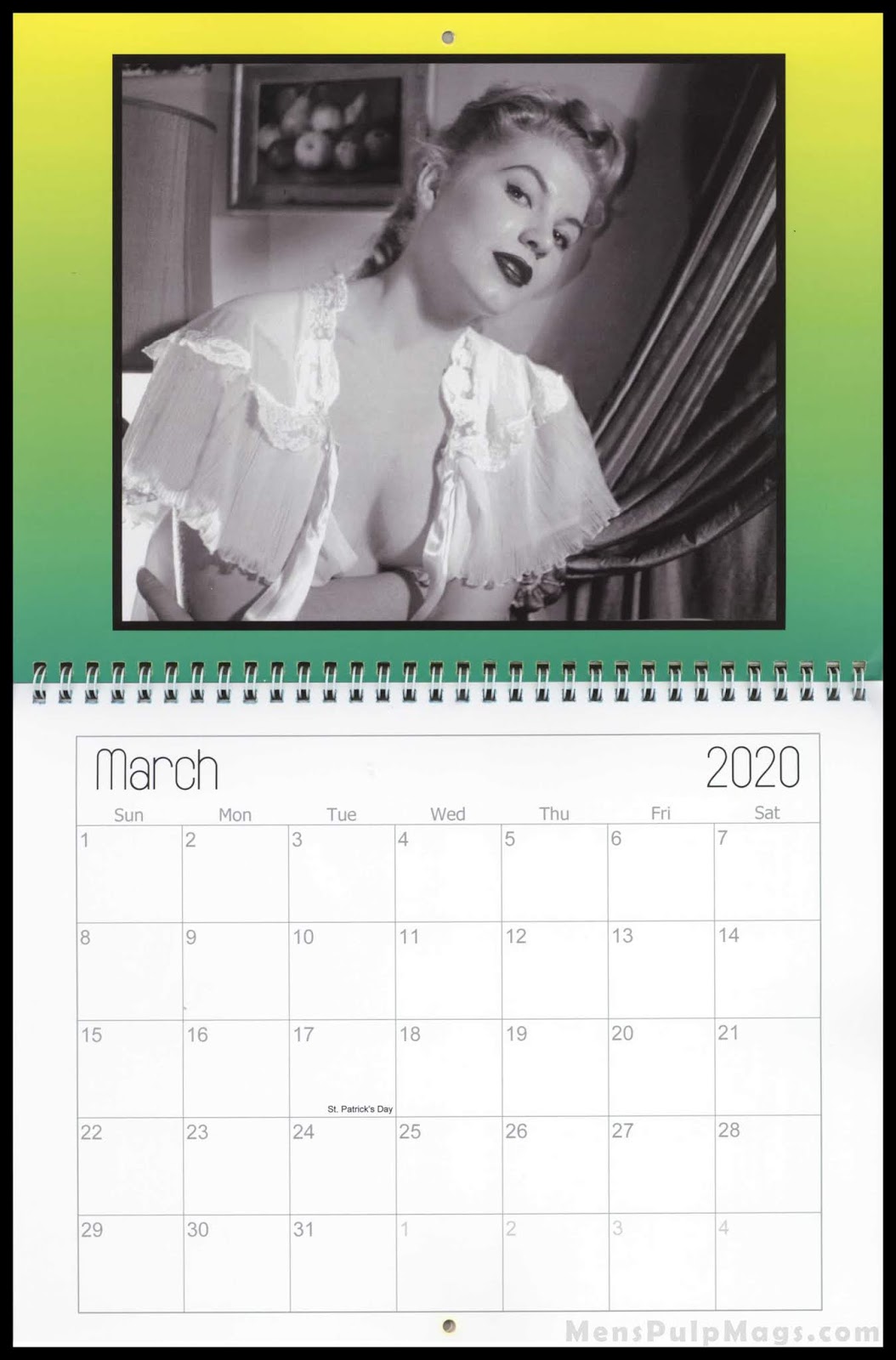 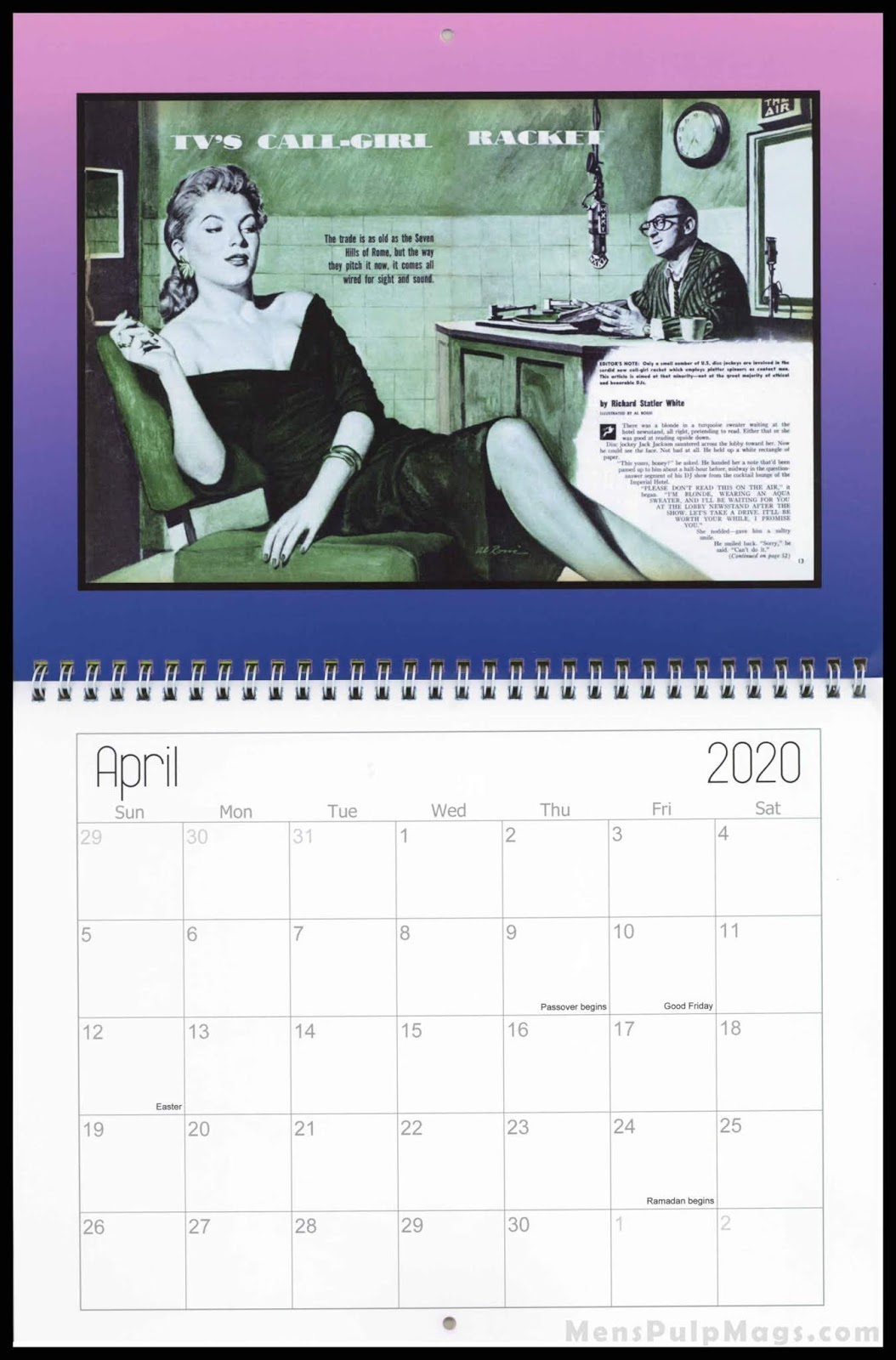 The May calendar page is photo of Eva taken in 1957 by pinup and fashion photographer Charles Kell. Eva was one of Kell’s favorite models. Photos he took of her showed up in a long list of men’s magazines, including BREEZY, FOLLIES, PARADE, PICTURE DIGEST, PICTURE SCOPE, SATAN, SCAMP, SHE, STARE, VUE and WHIRL. (You can read more about Kell by going to this page on the excellent “Glamour Photographers of the 1950s and 60s” website and scrolling down to the entry about him.)

The June calendar page shows the cover of the 1956 record album SCHEHERAZADE, which has the music by Rimsky-Korsakov performed by an orchestra conducted by Argeo Quadri. The photographer is uncredited on the album cover, buy Eva thinks that is one of many photos taken of her of her by Lester Krauss. Photos by Kraus appeared in both magazines and on the covers of dozens of album covers. He was also an artist, best known for his artwork for MAD magazine.

The July calendar page features another classic photo of Eva by Peter Basch.

The August page features the cover of the men’s adventure magazine NEW MAN, October 1968. The cover art is another classic MAM paintings by Norm Eastman that Eva modeled for. As shown in the book EVA: MEN’S ADVENTURE SUPERMODEL, it’s also one of many in which she modeled together with Steve Holland. 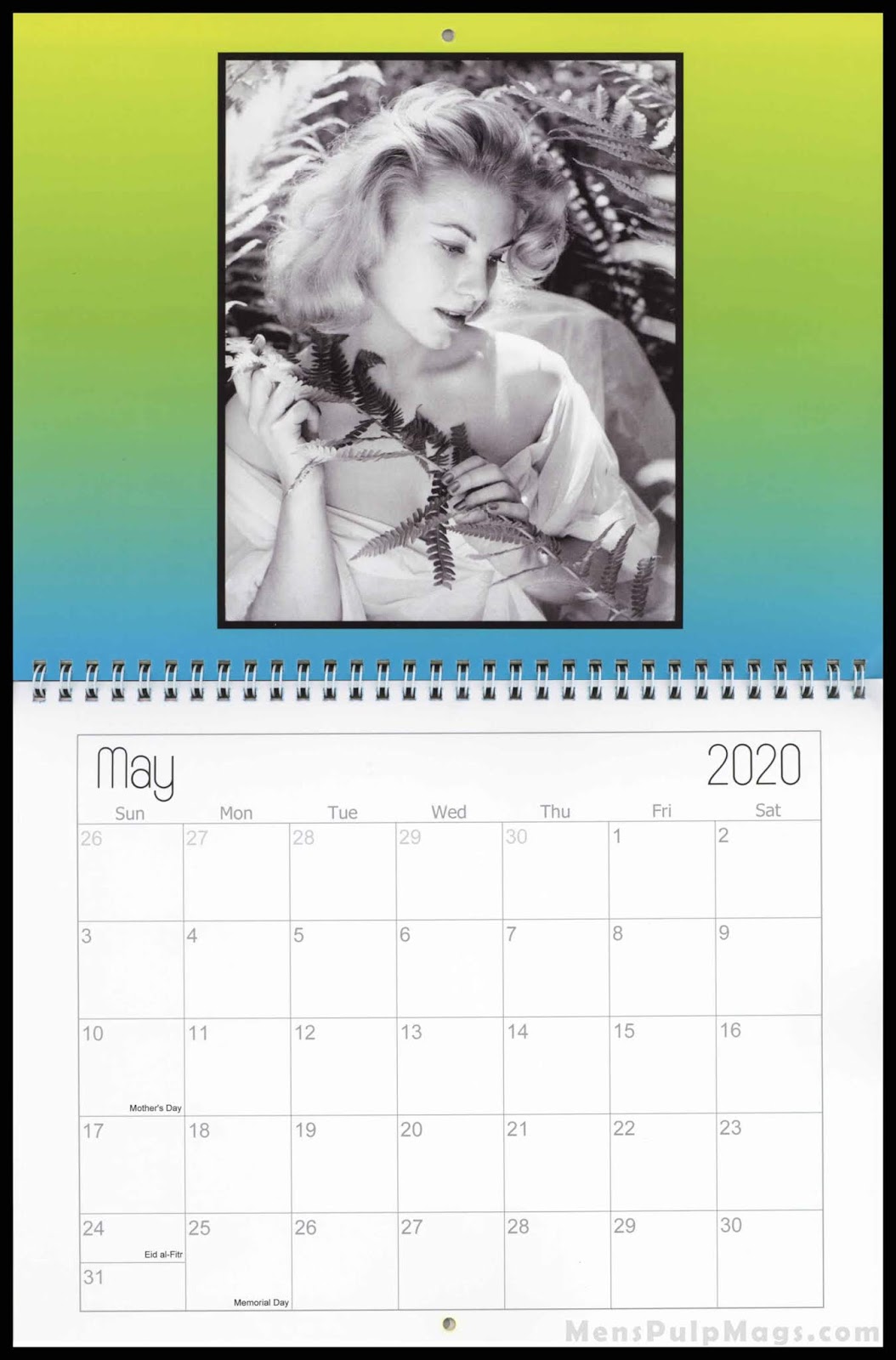 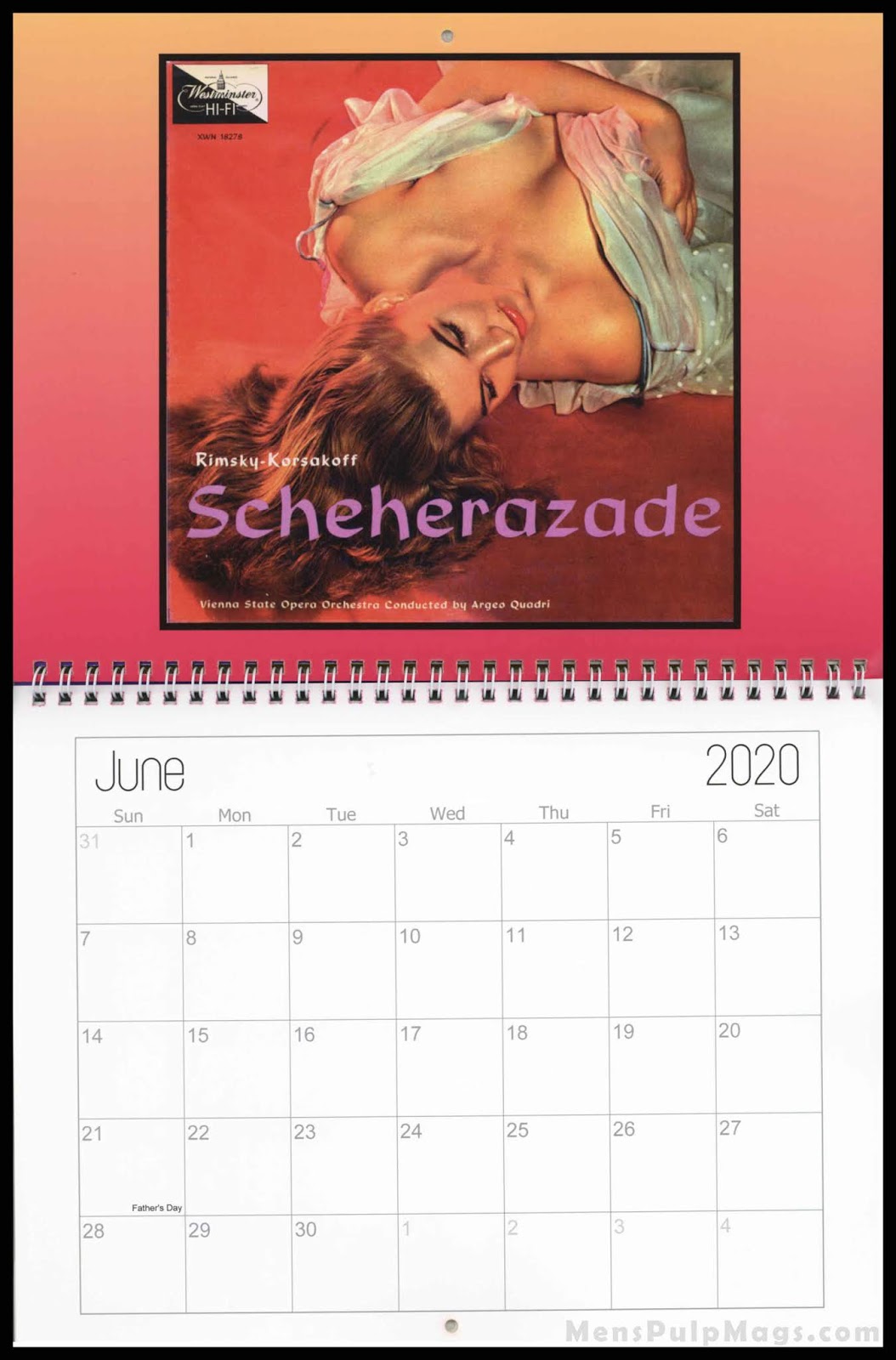 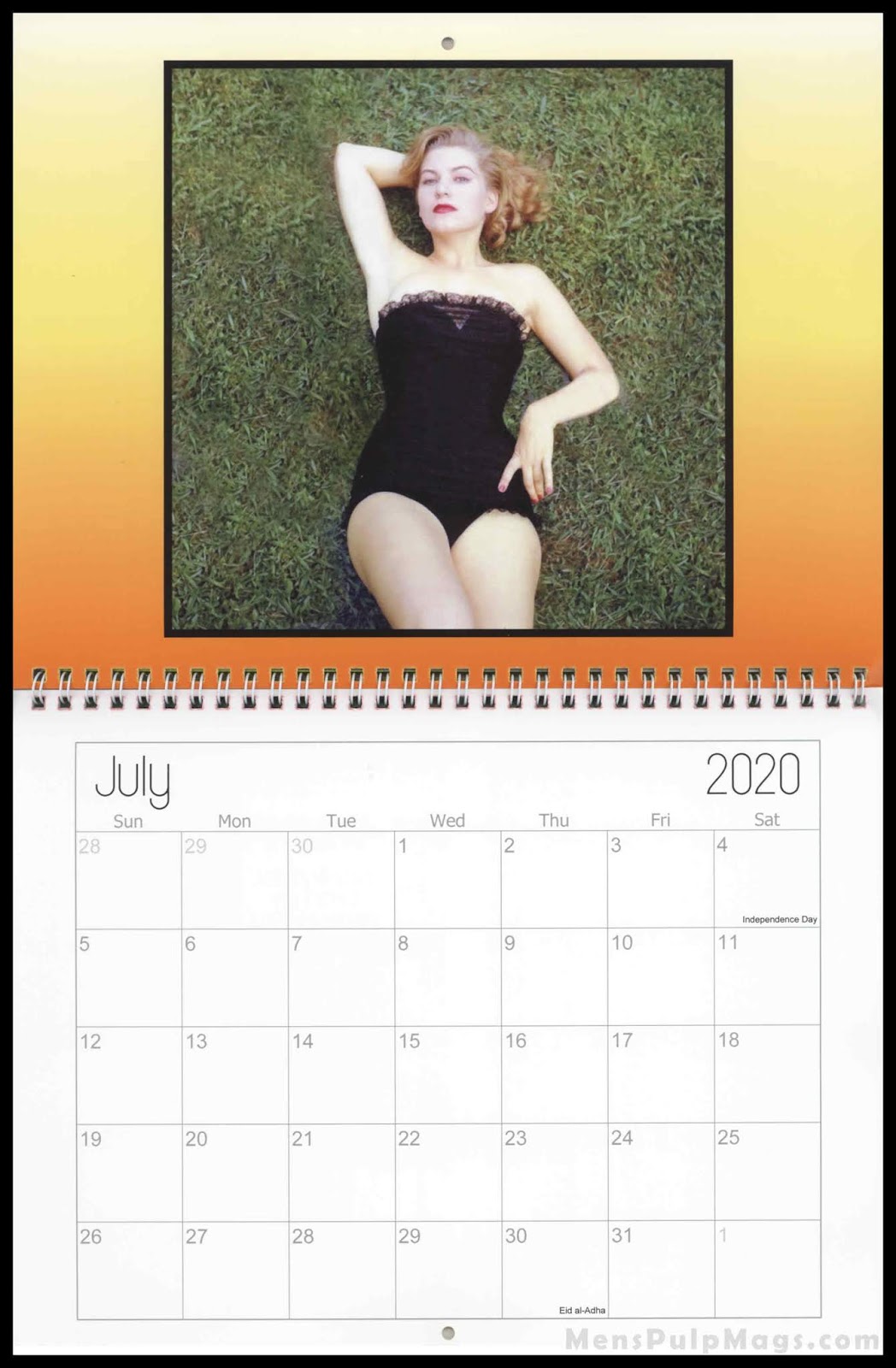 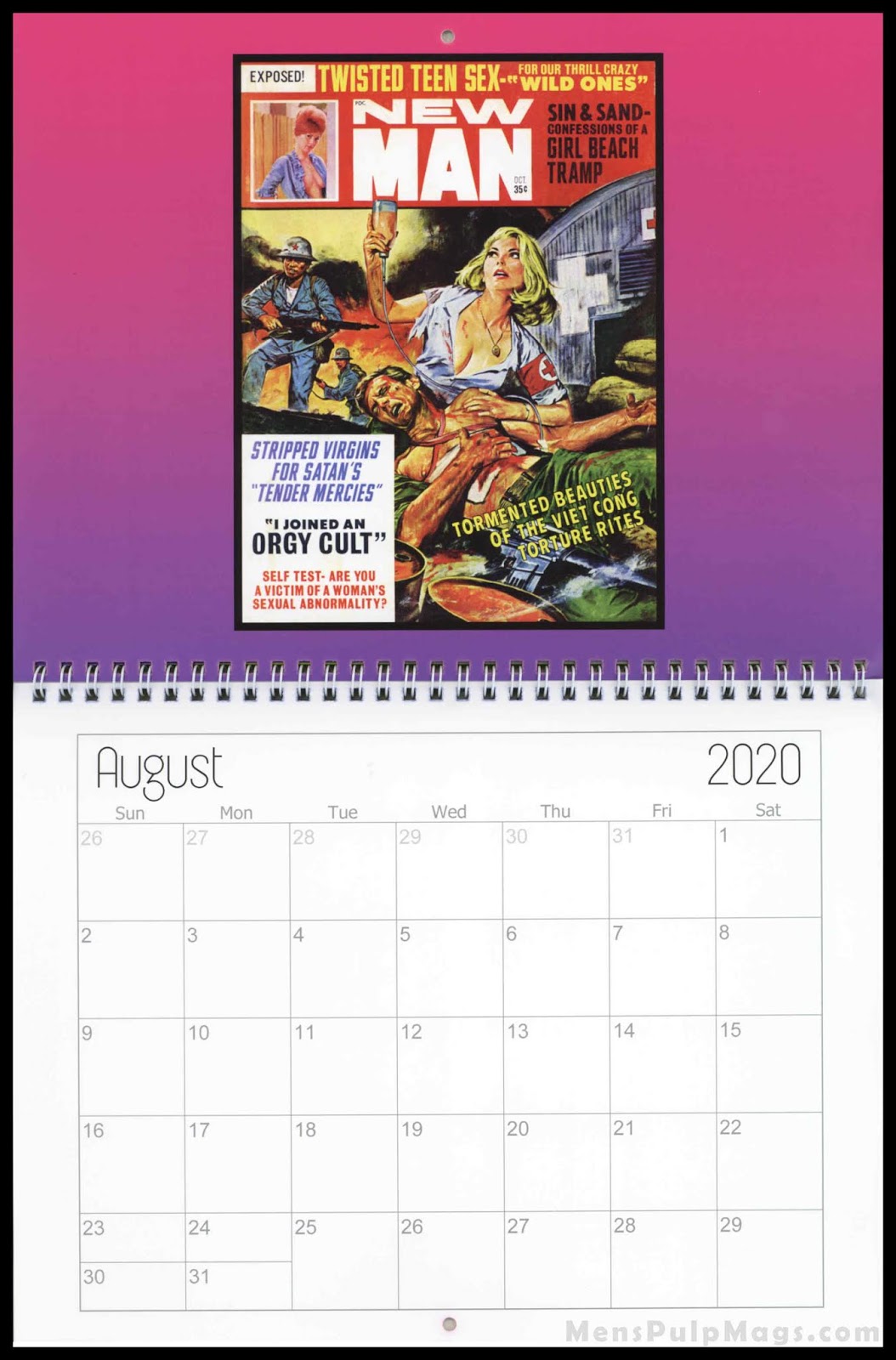 The September calendar page shows Eva on the cover of MALE POINT OF VIEW, September 1958. That photo was taken by photojournalist and glamour photographer Herb Flatow. His photos of Eva appeared in men’s adventure mags like MAN’S CONQUEST (January 1958) and on the covers of or inside bachelor mags like CAPER (January 1959), and MODERN MAN (Spring 1959). (You can read more about Flatow by going to this page on the “Glamour Photographers of the 1950s and 60s” website and scrolling down to the entry about him.)

The great New York-based pinup photographer and photojournalist Wil Blanche took the photos in the magazine spread shown on the November page of the calendar. It comes from the February 1960 issue of SHE magazine, though Blanche sold photos from that session to many other men’s pinup photo magazines and MAMs, including ADVENTURE, LA VIE PARISIENNE, MALE POINT OF VIEW, NIGHT AND DAY, NUGGET, SCAMP, SHE and TV GIRLS AND GAGS. Blanche was one of the first African American photographers to work for major mainstream magazines like LOOK. He is also known for the documentary style photos he took of New York City in the ‘60s and ‘70s. One of his most notable photojournalism assignments was for the DOCUMERICA series, showcased online by The U.S. National Archives.

The December page of the calendar shows the cover of MODERN MAN, January 1959, which features a photo of Eva by Leo Fuchs. It’s Eva’s face from that photo that appears on the softcover edition of EVA: MEN’S ADVENTURE SUPERMODEL. Fuchs is especially renowned for his candid photos of Hollywood celebrities on movie sets, collected in the book LEO FUCHS: SPECIAL PHOTOGRAPHER FROM THE GOLDEN AGE OF HOLLYWOOD. He later become a movie producer. He started out with the 1966 film GAMBIT, starring Shirley MacLaine and Michael Caine, and went on to produce 13 other movies. The last was MALONE, starring Burt Reynolds and Cliff Robertson, released in in 1987. 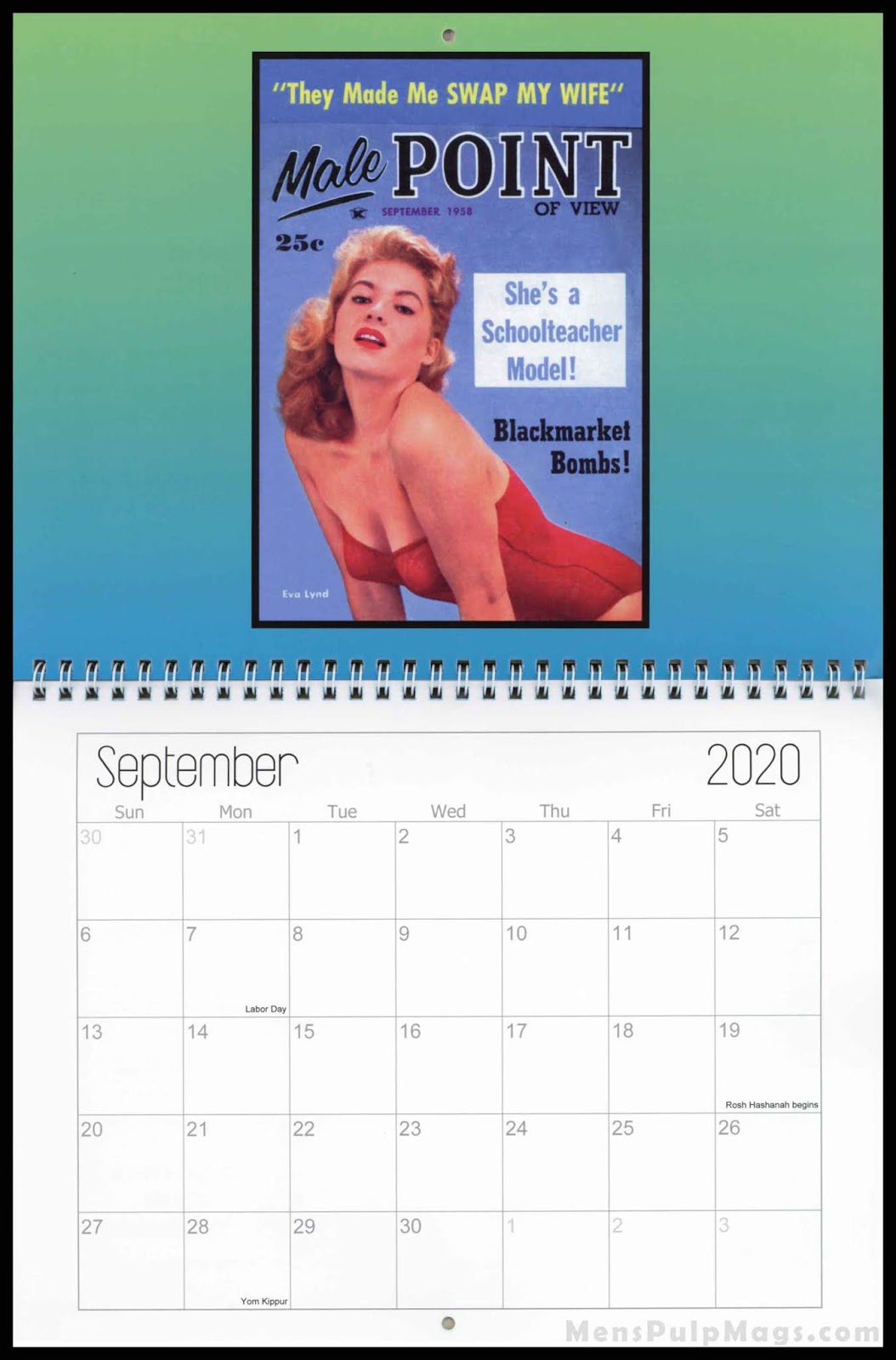 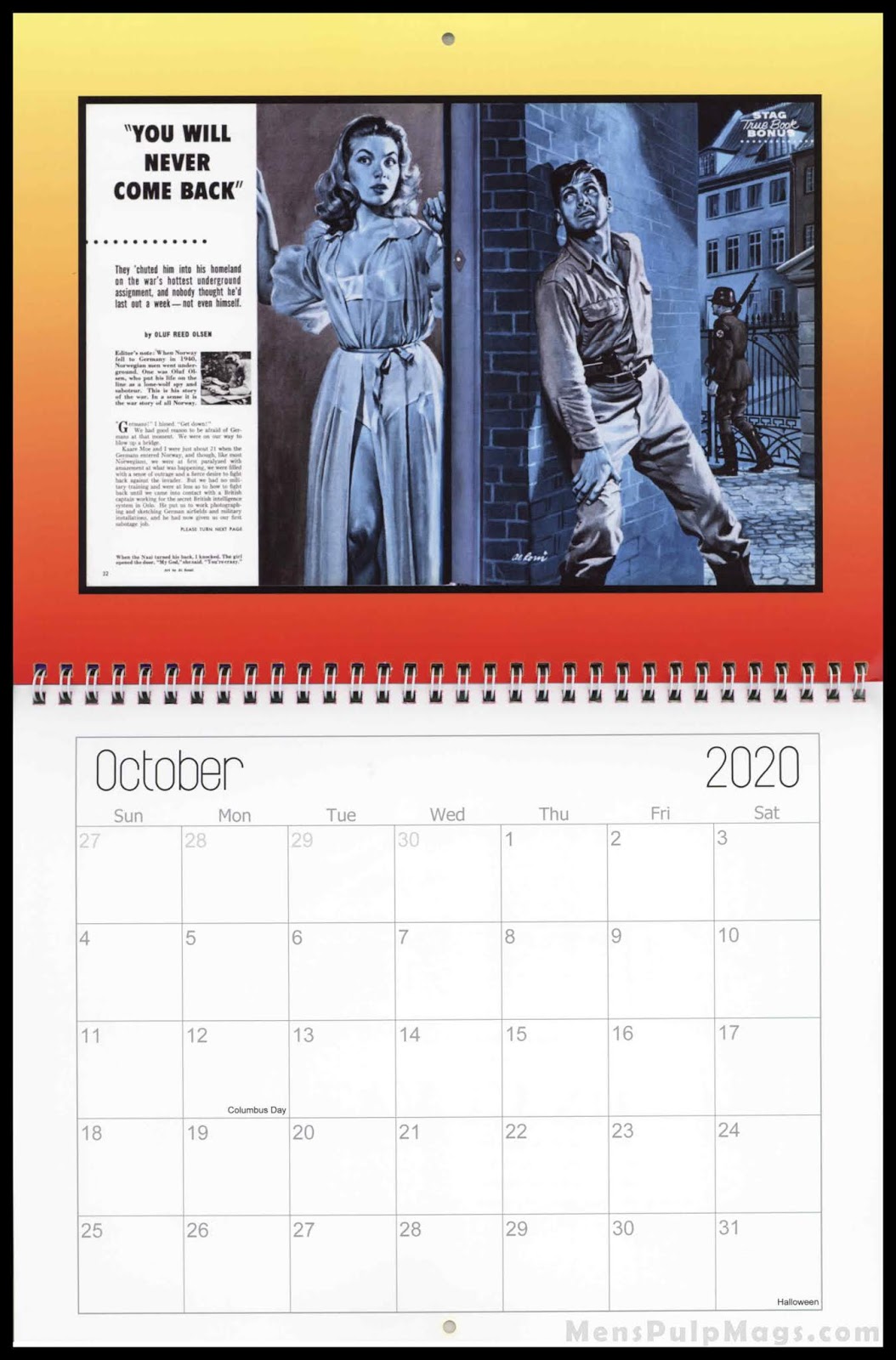 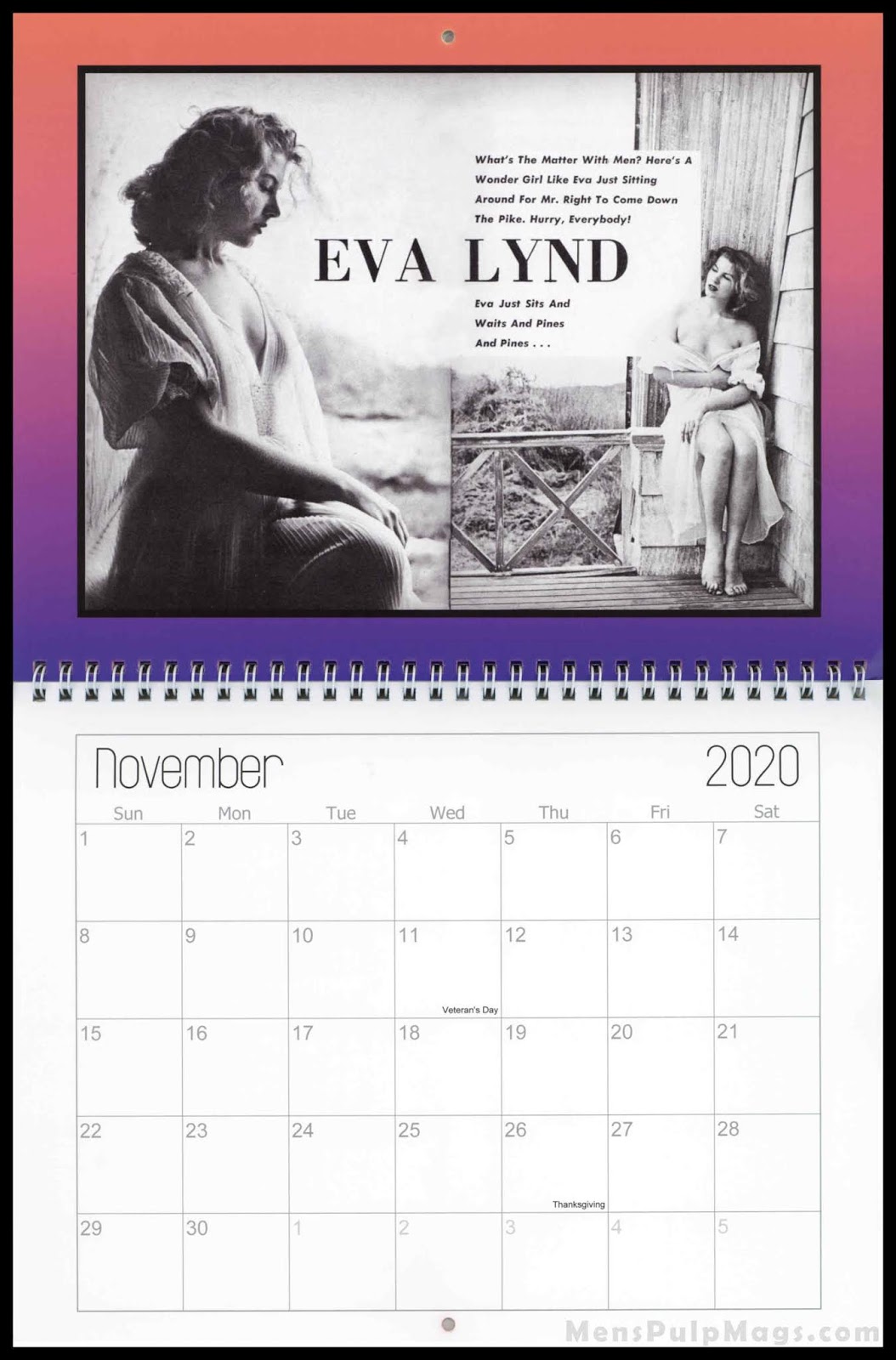 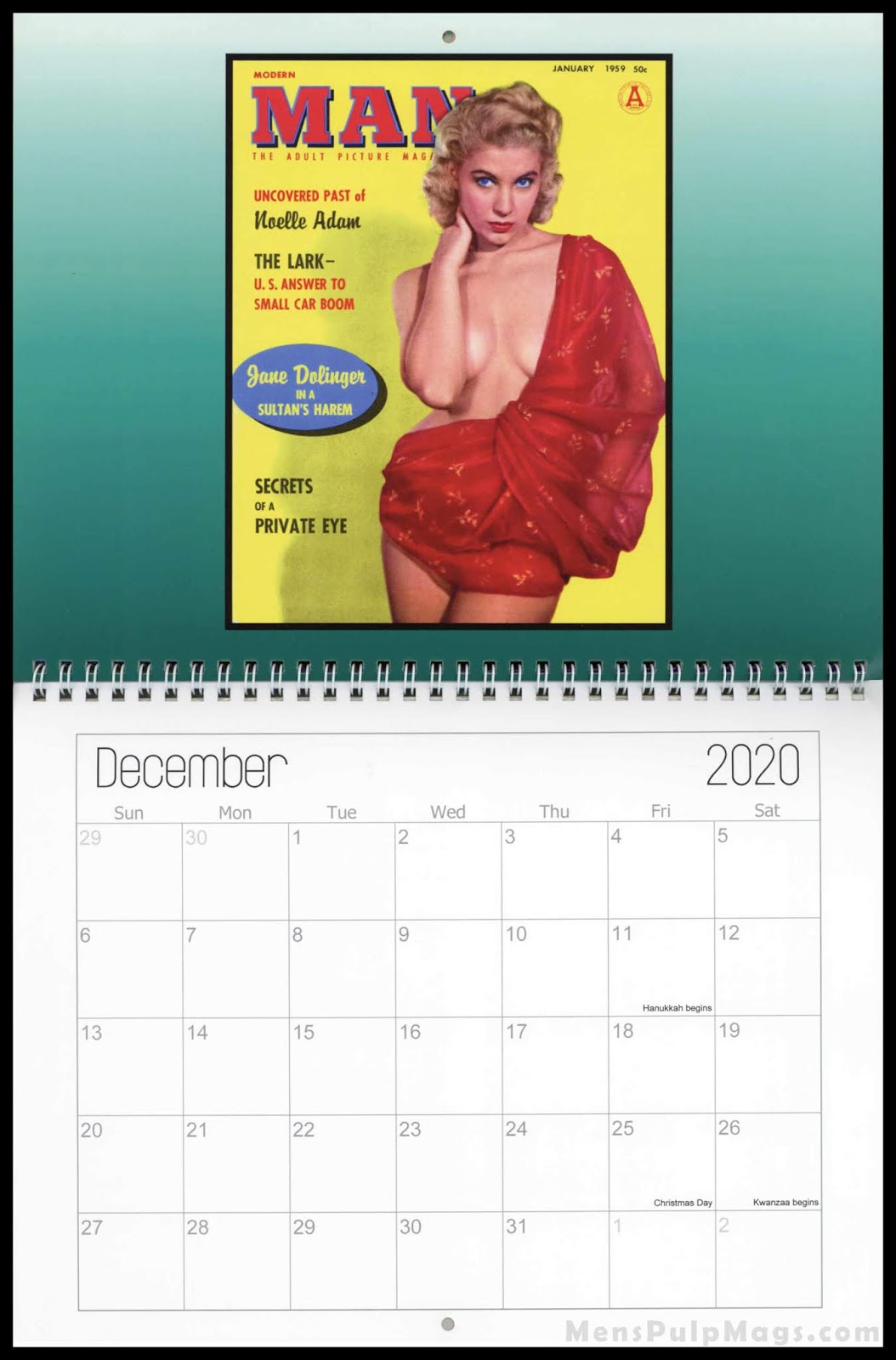 The images used for the 2020 Eva Lynd Calendar — and hundreds of others — are the book EVA: MEN’S ADVENTURE SUPERSTAR. For an extensive preview, click this link.

CLICK THIS LINK OR THE BOOK COVER BELOW TO BUY EVA: MEN’S ADVENTURE SUPERMODEL 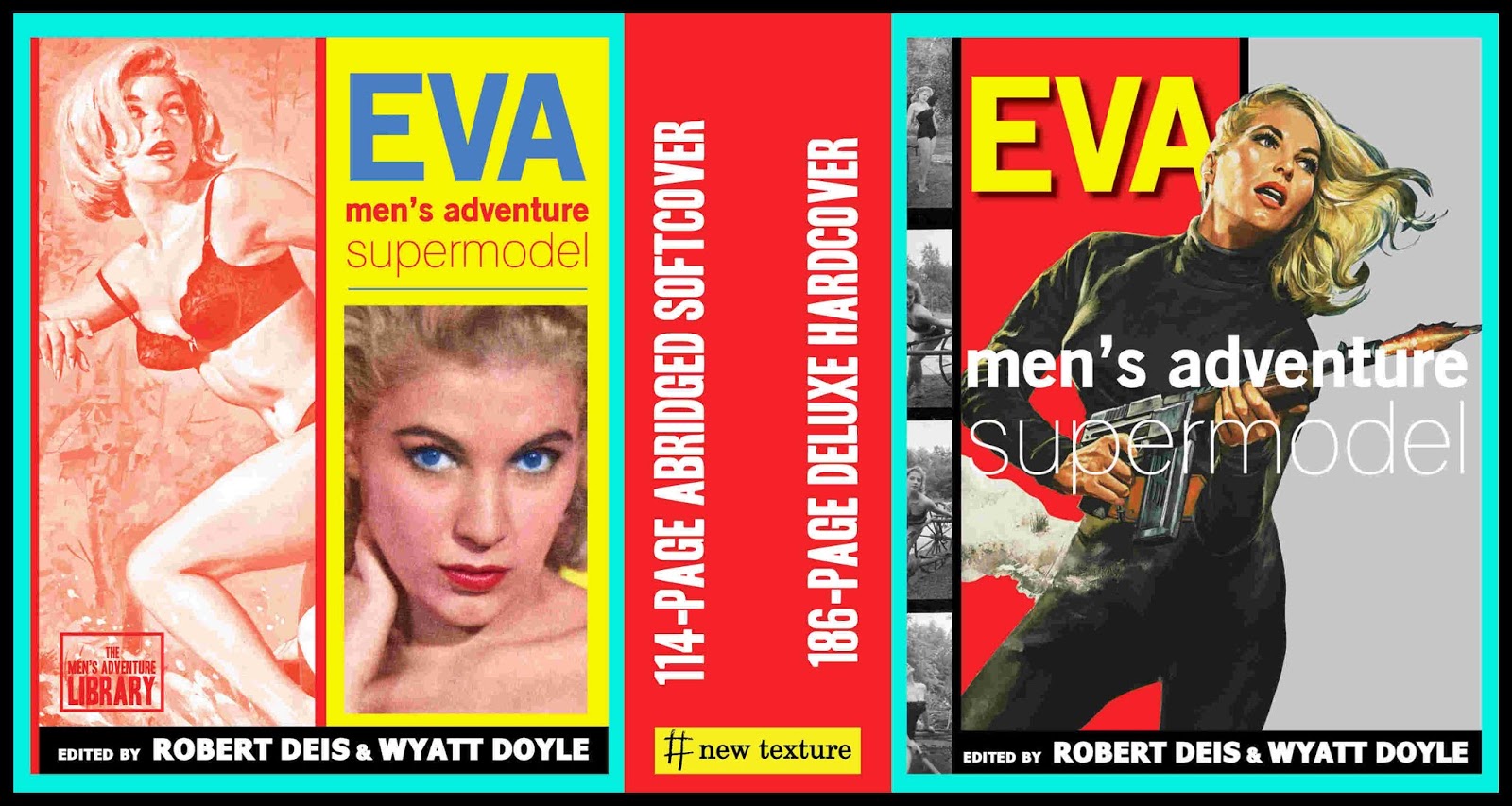