My previous post showcased some men’s adventure magazine covers in the survival at sea subcategory – manly men and womanly women in lifeboats and rafts. 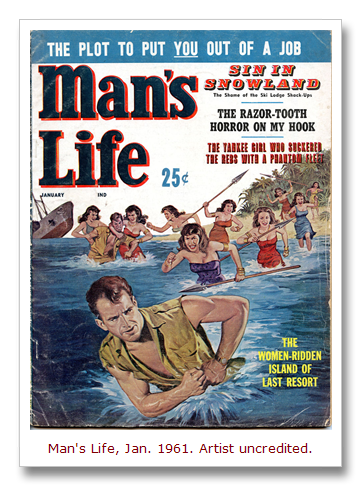 A related subgenre involves shipwreck survivors who make it to land. Typically, they are stranded on exotic tropical shores. And, as usual in men’s pulp mags, the stories and covers almost always include hunky he-men and scantily clad you-know-whats.

The cover at left is a top notch example. It’s from the January 1961 issue of Man’s Life. It has a great but uncredited cover painting, showing two shipwrecked men being chased by gorgeous but unwelcoming Amazon-like women.

You can see the grounded ship under the magazine’s title, in the background behind the man who’s being arm-twisted and headlocked by two of the, er, natives.

Bad luck, guys. You just happened to have hit a reef on the “THE WOMEN-RIDDEN ISLAND OF LAST RESORT.”

I don’t know about you, but I’d never heard the phrase “women-ridden” before. I guess it might almost sound like a good thing – until you see the cover painting and read the story it goes with.

The women are Javanese killer babes who want the heads of the “white devils” who landed on their isle. I mean the big heads, in this case – which the gals want to make small, as in shrunken.

Another wild shipwreck tale is in the July 1960 issue of Action for Men (one of the covers featured in my previous survival at sea post). In this story, a group of three men and two women (yep, gorgeous ones) wash up on a deserted tropical island in the Indian ocean.

That math just doesn’t work. And, one of the men is a very bad dude. He kills the other two men and one of the women before he gets his skull bashed in with a rock by the surviving tough chick, who is eventually rescued. Hence the title of the story: “Last Girl off Shipwreck Island.”

I love the lush 2-page duotone illustration artist Vic Prezio created for the story (shown below). 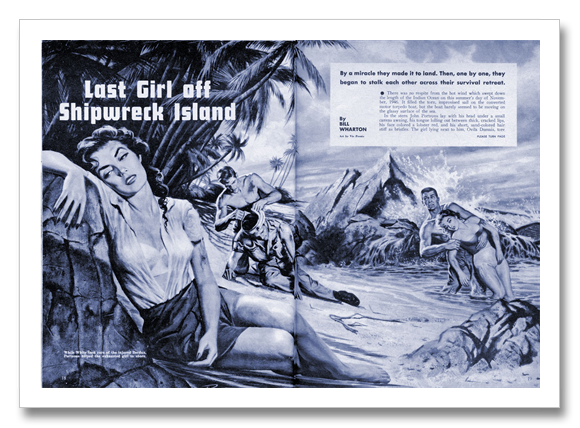 Prezio was a popular illustrator who painted covers and illustrations for many men’s adventure magazines in the 1950s and 1960s. He also did classic covers for comics and horror magazines like Creepy and Eerie. Here are just a couple of examples… 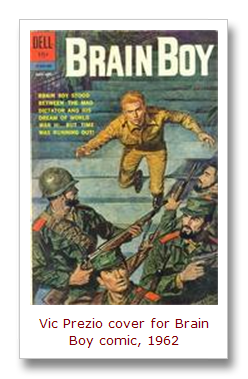 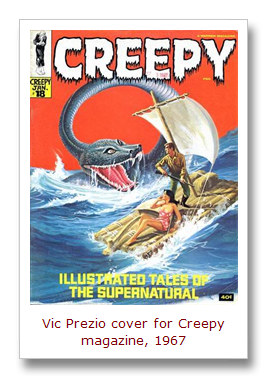 Art by Earl Norem does double duty, for a “Spider Tribe” and a “Scorpion Cult”…