As the 1950s came to an end, the long, slow decline of manufacturing jobs in post-WWII America was starting to kick into higher gear. There were more and more automated manufacturing plants, programmed with those new-fangled Eniac-Brainiac computer things. They could assemble cars, appliances and about anything else faster than humans. Every year, more good-paying jobs were being taken away by the cybernetic scabs. Frakking toasters! 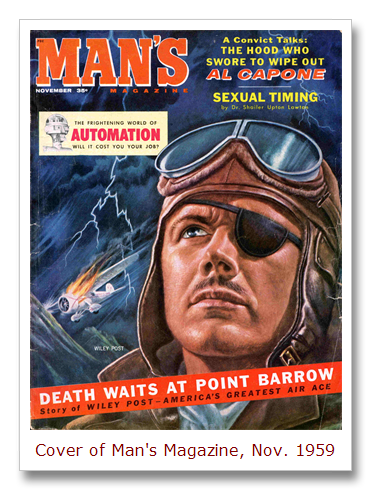 This trend was an understandable concern for the blue-collar working men who were core readers of men’s adventure magazines.

The November 1959 issue of Man’s Magazine stoked those concerns with an article highlighted in an inset on the cover.

Its ominous title: THE FRIGHTENING WORLD OF AUTOMATION. WILL IT COST YOU YOUR JOB?

The article mixes some real facts about “automation devices” and “electronic brains” with scary speculations about the hundreds of thousands of people they would put out of jobs in the near future.

Of course, one of its examples of a state-of-the art robot was “Elektro,” a man-like Westinghouse bot who “smokes, plays piano and has a vocabulary of 77 words.”

I doubt if most readers of Man’s Magazine were too worried about him. But other examples of tireless proto-droids and newly automated manufacturing plants paint a dim future for job-hungry humans.

The article does have an upbeat ending. “On the brighter side,” it concludes, “automation will never be universal. It is helpless in certain fields such as service businesses and all the professions. (Yes, even writers are safe.)” 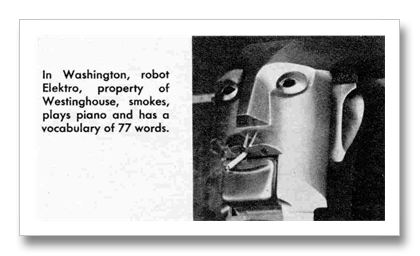 Thanks for that ending.