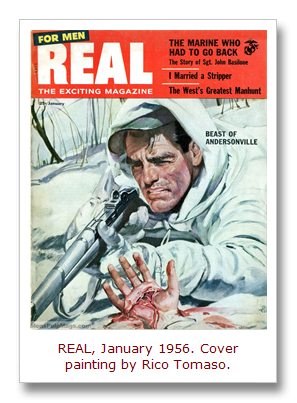 REAL magazine was one of the best and longest-running men’s pulp adventure magazines of the 1950s and 1960s. It was published from 1952 to 1967 by a series of companies.

The title was launched in October 1952 by Literary Enterprises, Inc., which also created the great men’s adventure mag SEE FOR MEN.

Literary Enterprises published REAL on a monthly basis until April 1958. At that point it disappeared for 16 months.

The January 1956 issue of REAL is one of my favorites, both in terms of the artwork and the stories.

The cover painting, by Rico Tomaso, shows An American GI dressed in white camouflage (for snowy conditions) aiming what looks like a World War Two or Korean War era M1 rifle. A bloody, mangled hand is sticking out of the snow in front of him. Presumably, there’s a dead body connected to it underneath the snow.

It’s a great and gritty portrait of an American serviceman in action, one of a series Tomaso did for REAL and, before that for ARGOSY (shown in this previous post). 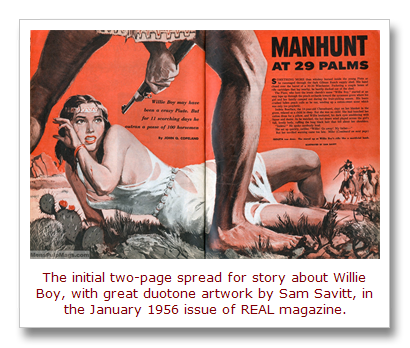 The stories in the January 1956 issue feature a number of legendary killers, heroes and glamour girls.

One is about “Willie Boy,” the ill-fated California Indian who sparked what has been called the last great manhunt of the Old West in 1909.

In some accounts, Willie Boy is a murderous villain. In others, such as the excellent 1969 movie TELL THEM WILLIE BOY IS HERE, starring William Blake, Robert Redford and Katharine Ross, he is portrayed more sympathetically.

This much is simple fact…

He got into a fight her father, who ended up dead. Willie then took the girl with him on a long run through the barren hills and desert of San Bernardino County, followed by heavily-armed posses on horseback. 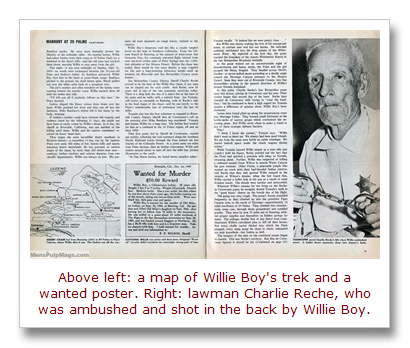 When it was all over, the girl had been shot dead — either by Willie or a posse member — and Willie committed suicide, after an 11-day trek through hundreds of miles of backcountry.

The story about Willie Boy in REAL, titled “MANHUNT AT 29 PALMS,” is much darker and less sympathetic to Willie than the movie and other more recent accounts.

Willie is portrayed as a cold-blooded killer by the author John Q. Copeland, who wrote both magazine stories and television scripts in the 1950s.

The striking orange duotone for the story was done by artist Sam Savitt. It shows poor Isoleta cowering in fear and about to be shot by Willie Boy.

Sam Savitt was one of the great pulp illustration artists who worked for both pre-World War Two pulp fiction magazines and the postwar men’s adventure mags. He later became best known as one of the country’s premier painters of horses.

Though it’s debatable whether Willie Boy was a villain or a victim, there is less doubt about the heinous nature of the other killers featured in the January 1956 issue of REAL. 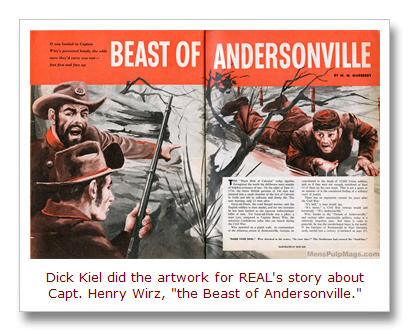 One is Confederate Capt. Henry Wirz, “the Beast of Andersonville.”

Toward the end of the American Civil War, Wirz was the commander of the Andersonville prison, where thousands of captured Union soldiers were kept in inhumanely harsh conditions rivaling those of Nazi concentration camps.

More than 10,000 Yankee soldiers died in Andersonville, from disease, starvation, exposure, and execution — including 13 who Wirz killed himself.

After the war, Wirz was the only Confederate soldier charged with war crimes. He was found guilty and hanged on November 10, 1865. His fate is sometimes cited as a precedent that foreshadowed the prosecution of Nazi officers after World War Two.

The account of Wirz’s reign of terror at Andersonville in REAL was written by M.M. Marberry, whose best-known works are his biographies of women’s suffrage leader Victoria C. Woodhull and American poet Joaquin Miller, “Poet of the Sierras.”

The illustration for Marberry’s story in REAL was done by a little-known illustration artist named Dick Kiel. 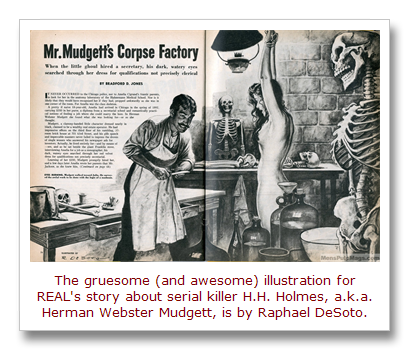 In terms of hands-on murders, even Wirz is a piker compared to the monster featured in another story in this issue of REAL.

Titled “MR. MUDGETT’S CORPSE FACTORY,” it tells the horrific story of Herman Webster Mudgett, better known by the alias he used, H. H. Holmes. Holmes was one of the earliest and most infamous serial killers in American history.

He murdered and dismembered dozens, maybe hundreds of women (and several men), many of them in hidden areas of a maze-like hotel he designed and had built in Chicago.

I’m a big fan of the 2004 book that reacquainted Americans with Mr. Mudgett, THE DEVIL IN THE WHITE CITY by Erik Larson.

The story is REAL isn’t as well-written as Larson’s book. But it’s interesting to read a different account and it includes an awesome illustration by Rafael “Ray” DeSoto, another one of the great artists who worked for both pre-WWII pulps and men’s pulp adventure magazines.

The illustration for the next story in REAL about a historic villain was done by an even more famous pulp illustration artist — Norman Saunders. 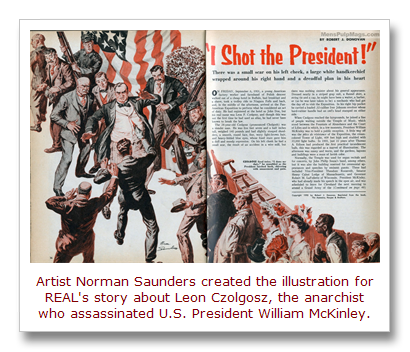 The story is about Leon Czolgosz, the anarchist who assassinated U.S. President William McKinley and was later executed for it.

Czolgosz shot the President in the abdomen on September 6, 1901 at the Pan-American Exposition in Buffalo, New York.

In addition to featuring some of America’s most famous killers, the January 1956 issue of REAL includes stories about a renowned war hero, Medal of Honor recipient Sgt. John Basilone, and the great sports hero, basketball superstar Wilt “The Stilt” Chamberlain.

There’s also a truly interesting story written by the husband and manager of Burlesque superstar May Do (also known as DoMay), a horizontal two-page photo of pinup queen Bettie Page, and a lot of other interesting retro treasures.

We’ll take a look at those in the next post.

In the meantime, if you’d like to read the January 1956 issue of REAL, you can go to the MensPulpMags.com Virtual Newsstand and download a complete, high-resolution PDF copy of that issue.