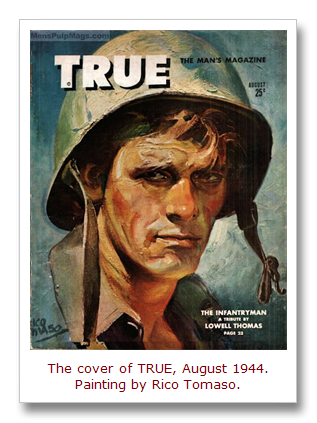 Recently, in the Men’s Adventure Magazines Facebook group, I posted a few examples of the great painted portraits of US servicemen artist by Rico Tomaso that were used on covers of TRUE magazine in 1944 and 1945.

I think the paintings in that series rank among the best works that Tomaso created during his long long career.

When he did them, World War II was still underway and the men’s adventure magazine genre had not quite taken shape, though TRUE was leading the way.

The first painting Tomaso created for TRUE in the final years of WWII was for the February 1944 issue. It shows a group of American troops making a beach landing. (It’s not the D-Day landing. That was still four months in the future.)

The second in the series appeared on the March 1944 issue. 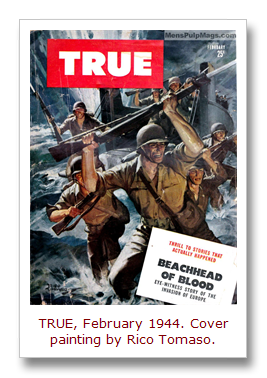 The original cover painting for that issue, shown below, is now owned by collector Tim Isaacson, who happens to one of the Men’s Adventure Mag FB group members.

Tim was gracious enough to send me a photo of it, and a scan of the cover.

All three of those initial paintings in the series are well done.

But my favorites are the more painterly, head-and-shoulders close-up portraits he did, starting with the August 1944 issue.

In fact, that is one of my all time favorite men’s adventure magazine covers paintings.

The paint is applied thickly, with broad, obvious brush strokes.

The look on the soldier’s face is intense. His eyes are haunting.

He evokes an air of ballsy determination combined with war-weariness that is almost palpable.

He is the archetypal American GI.

And, in fact, the portrait goes with a story inside that’s a special tribute to “The Infantryman,” written by the well-known journalist and author Lowell Thomas. 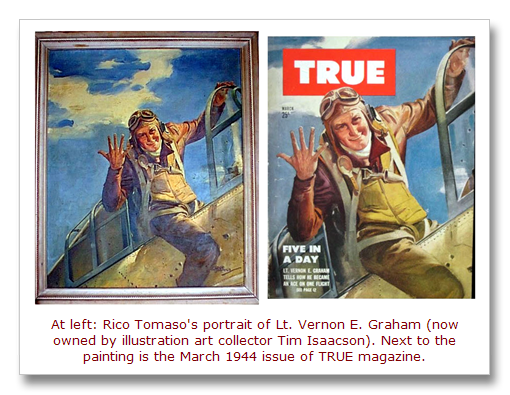 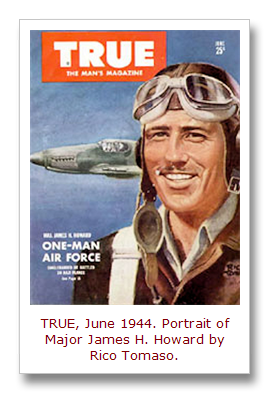 Later in 1944 and in 1945, Tomaso did several other similar portrait paintings of individual US servicemen for TRUE in a similar style.

To date, I haven’t been able to find copies or even good JPEG images of all of them.

But the ones I’ve seen also have the painterly, somewhat Impressionistic feel of the August issue. And, they are all clear reflections of the artistic training Tomaso received as a young man. 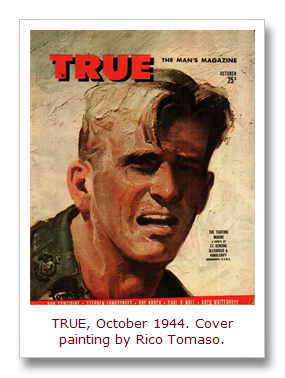 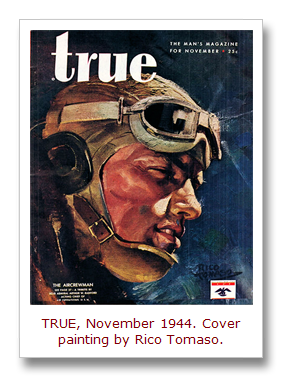 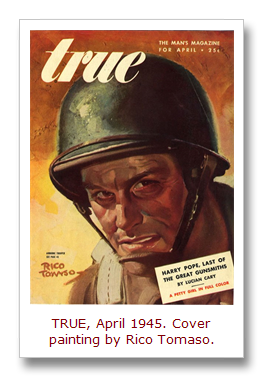 There’s surprisingly little biographical information about Tomaso online. One of the best bios I found is in Walt Reed’s classic reference book THE ILLUSTRATOR IN AMERICA.

Based on that, and some other information from various sources, here’s my own thumbnail overview…

Rico Tomaso was born in Chicago in 1898, grew up there and studied art at the famed Chicago Art Institute. One of his teachers was the legendary illustration artist Dean Cornwell. Cornwell became one of the biggest influences on Tomaso’s style and career and one of his closest friends.

Around 1918, Tomaso joined the US Navy. He served a four year tour of duty that took him to Europe. When his term of enlistment ended, he spent several years in France and Belgium, honing his artistic skills and studying the works of the European Realist and Impressionist painters.

After Tomaso returned to the US in the mid-1920s, Dean Cornwell convinced him to move to New York, the best place for aspiring illustration artists to get work. There, he met Robert Henri, the renowned artist and teacher who helped introduce Impressionism in America and was a leader of the “Ashcan School” of American realism. Henri became Tomaso’s other important mentor and friend. You can clearly see his influence and Cornwell’s in Tomaso’s art. 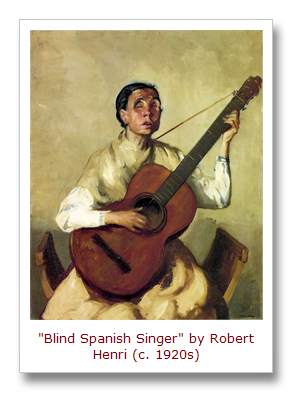 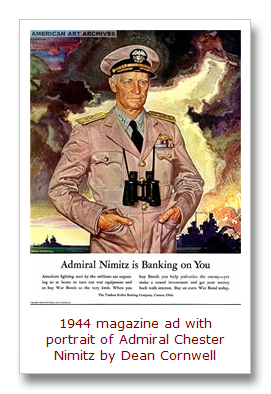 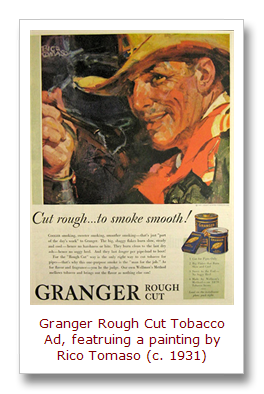 In the 1930s and 1940s, Tomaso’s career as an illustrator grew and flourished.

His artwork appeared in many of the top mainstream magazines of the day, including THE SATURDAY EVENING POST, COSMOPOLITAN, REDBOOK, LADIES HOME JOURNAL, GOOD HOUSEKEEPING and WOMAN’S HOME COMPANION. 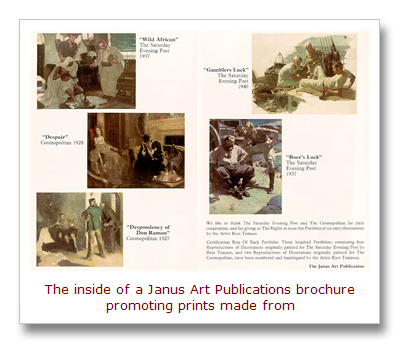 He also did artwork for some of the fiction pulps that were popular in the ‘30s and ‘40s and paintings for magazine advertisements during those decades and into the ‘50s.

Some of his best advertising illustrations were portrait-style paintings similar to those he did for the TRUE servicemen series. My favorites are the ads he for Nash Kelvinator and the Hat Corporation of America. (“HATS – As healthy as they’re handsome!”) 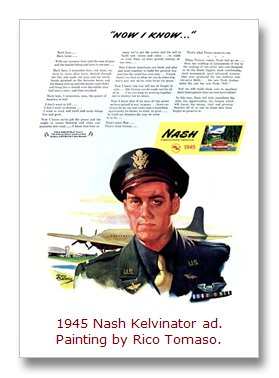 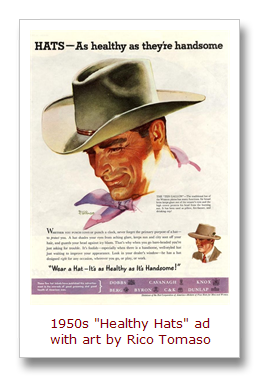 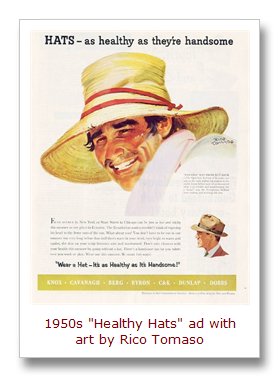 During the ‘50s, Tomaso did cover and interior paintings for several top men’s adventure magazines, including TRUE, ADVENTURE, REAL and SAGA.

Among them was another series of terrific servicemen portraits for the covers of REAL. 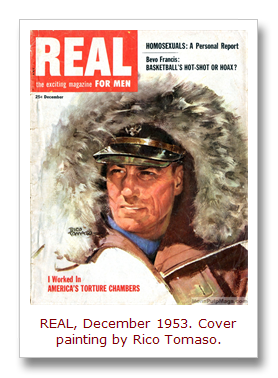 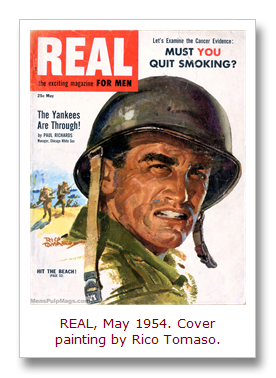 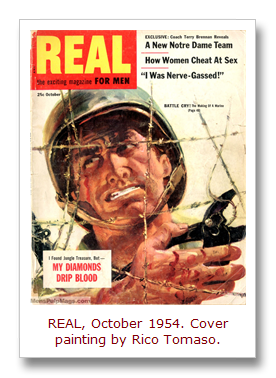 The covers shown above and below feature some of the best of his REAL paintings. 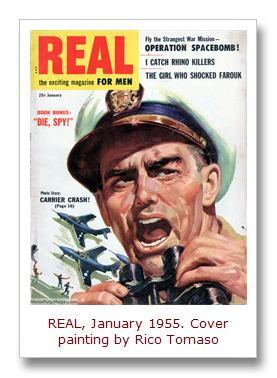 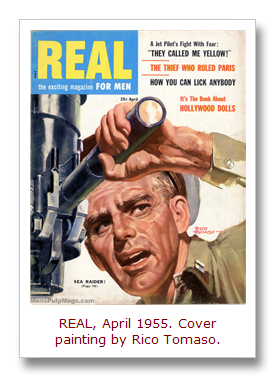 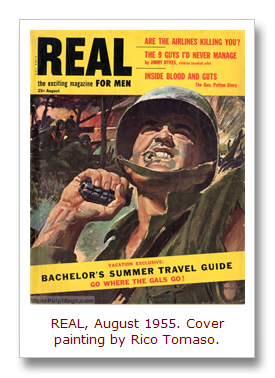 In the 1960s, Tomaso seems to have focused increasingly on creating “fine art” for galleries — including many colorful but somewhat schmaltzy paintings that became widely distributed as commercial lithographs and reproductions. He also taught art at schools in New York and did portrait work for clients who could afford such things.

In the ‘60s and ‘70s it was common to find copies of Rico Tomaso paintings of bullfighters, senoritas, landscapes and cute kids among the “Fine Framed Reproductions of Paintings by World Renowned Artists” that were sold by home furnishing retailers (along with those by Picasso and other noted mid-Twentieth Century artists). 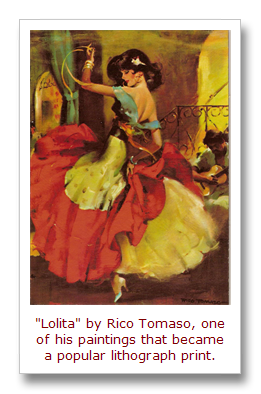 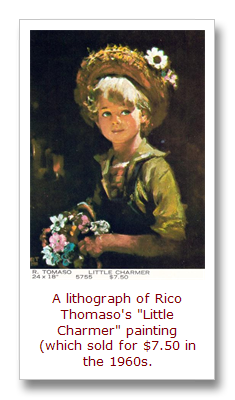 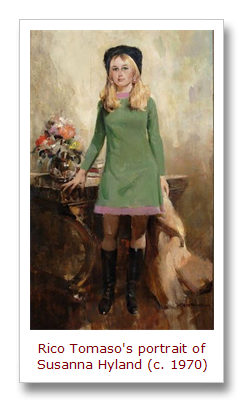 Rico Tomaso died in 1985. Though he was never quite as famous as his mentors Cornwell and Henri or artists like the SATURDAY EVENING POST regular Norman Rockwell, his work was and remains more widely known than that of many other illustrators who worked for men’s adventure magazines. Copies of his paintings and prints are still fairly common in galleries and on eBay.

By comparison, copies of the 1944 issue of TRUE that feature Tomaso’s servicemen portraits are hard to find, and may be quite pricey if you find them. I paid $79 for a copy of the August 1944 issue. But for me, it was a must have.

As I began writing this post, I Googled “Rico Tomaso” and looked at the image results. I was amazed to see the broad variety of the work he did and the various styles he used during his 60-year-long career as a professional artist.

And, as I’ve studied the cover paintings he did for men’s adventure magazines, I’ve come to feel that he deserves wider recognition as one of the best of the many great artists who worked for the genre.