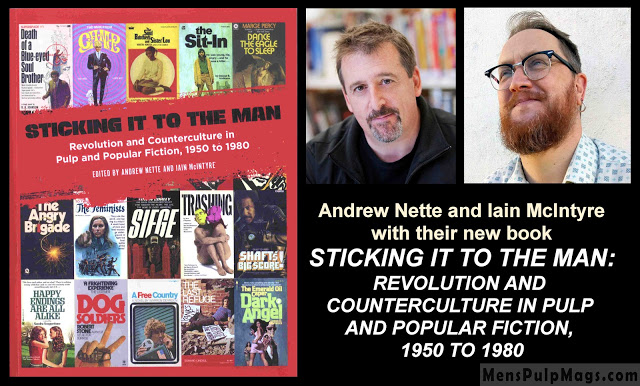 As I said in a previous post I wrote about pulp culture maven and novelist Andrew Nette, I am more than a little in awe of him.

In 2018, he took the study of vintage paperbacks into a new realm of academic analysis and excellence with his book about “Teensploitation” novels, GIRL GANGS, BIKER BOYS, AND REAL COOL CATS: PULP FICTION AND YOUTH CULTURE, 1950 TO 1980, co-edited with cultural historian Iain McIntyre.

It was one of the two best books I read that year.

The other was a novel written by Nette: GUNSHINE STATE, a gritty, noir-flavored heist and revenge crime thriller set in Australia and Thailand.

Since then, Nette has continued to write posts on his PulpCurry.com blog, one of the coolest sites on the internet about pulp and noir style paperbacks, movies and TV shows.

He also wrote a critically-acclaimed study of the influential 1975 science fiction movie ROLLERBALL, published as part of the prestigious Constellations series of “Studies in Science Fiction Film and TV.”

Like GIRL GANGS, Nette’s latest book is an in-depth look at a subgenre of mid-20th Century paperbacks. Again, his co-editor is Iain McIntyre, author of intriguing books like TOMORROW IS TODAY: AUSTRALIA IN THE PSYCHEDELIC ERA, 1966-1970 and WILD ABOUT YOU!: THE SIXTIES BEAT EXPLOSION IN AUSTRALIA AND NEW ZEALAND.

Their new book, published by PM Press, is STICKING IT TO THE MAN: REVOLUTION AND COUNTERCULTURE IN PULP AND POPULAR FICTION, 1950 TO 1980.

And, although Nette and McIntyre are Australian, they have a deep knowledge of both vintage paperbacks published in the United States and of the profound social changes taking place here from 1950 to 1980. 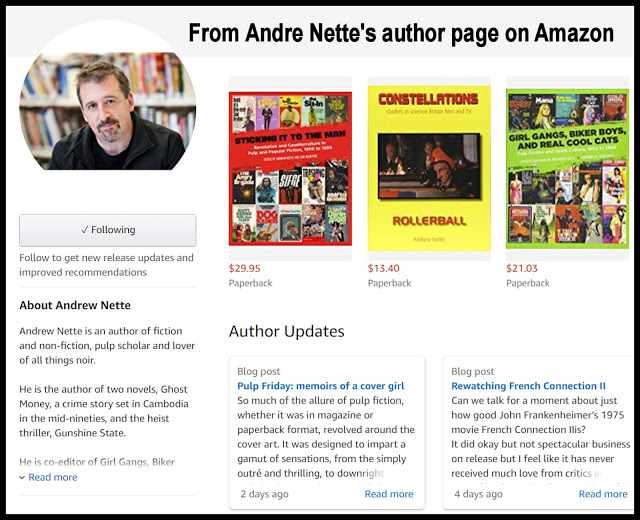 The subtitle of their new book is a shorthand description of the types of paperbacks it features.

But what’s covered in the more than 30 chapters and scores of sidebars and interviews inside is actually more wide-ranging than the subtitle suggests.

Most of the chapters focus on paperbacks written about or by people who were social outcasts or anti-establishment rebels of one kind or another: Hippies, Yippies, revolutionaries, gays and lesbians and other boundary pushers.

Of course, entertainment was the primary goal of the publishers who distributed these novels on shelves and spinner racks in bookstores, grocery and drug stores, bus stations, newsstands and almost any other venue where paperbacks could be sold.

Thus, as Nette and McIntyre note in their introduction, many of the books featured in STICKING IT TO THE MAN are “exploitation” style entertainment.

“Many, probably the majority, of the authors responsible for these novels had little if any connection to the movements or communities depicted in their fiction,” they explain. “In many cases, their portrayals were negative and inaccurate.”

But STICKING IT TO THE MAN also features books written by people who were in fact part — of or leaders of — social subgroups or organizations that were kicking against the pricks of straight society.

Those writers, the intro notes, “dealt with issues and communities few others in popular culture would touch, at the very least giving readers a sense that alternatives existed.”

Moreover, “even the books that are made up of the most reprehensible rubbish still provide an insight into the social mores, fears, and mind-sets of earlier times.”

Those comments by Nette and McIntyre could also be applied to the stories and articles in the men’s adventure magazines (MAMs) from the ‘50s, ‘60s and ‘70s that I collect and write about.

And, of course, there are other significant overlaps between the MAM realm and mid-20th Century paperbacks, including publishers, writers, artists and artist’s models who were involved in both.

STICKING IT TO THE MAN goes far beyond thumbnail descriptions of the novels it features by providing profiles of the authors and historical background that help place the books in their social context. 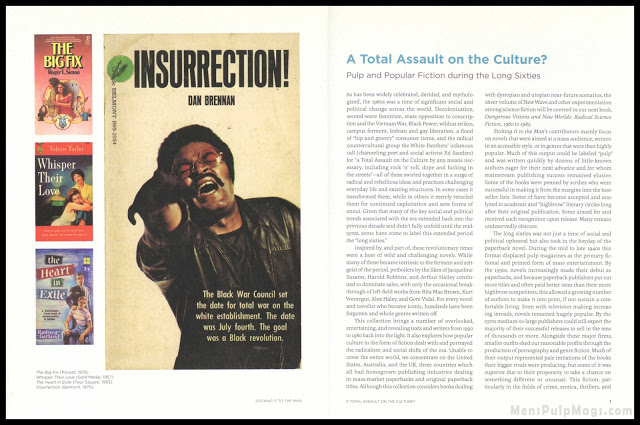 During the ‘60s and ‘70s, I was a young draft-age adult, a high school and college student, a Hippie and, for a while, a back-to-the lander living on a commune in rural Maine.

Though I moved on from having an “alternative lifestyle,” many of the experiences I had then are among my most vivid memories. They also had lasting effects on my tastes in books, music, movies and TV shows, and on my views about the world. I’m still particularly fascinated by the social history and media of those decades. So, the chapters about American books and writers featured in STICKING IT TO THE MAN had a particular resonance for me.

But I also enjoyed the chapters on books involving social and political issues and movements in other countries, ranging from Australia and Africa to Canada. That’s not something you find in many other books about vintage paperbacks.

Indeed, STICKING IT TO THE MAN is not your typical book about vintage paperbacks.

It’s one that combines insightful paperback reviews with heavily-researched cultural and political history, pop culture history, and author profiles and interviews. And, it includes contributions written by more than 20 knowledgeable academics and other experts Nette and McIntyre recruited for the project.

Nette and McIntyre used a similar approach in GIRL GANGS and I loved that one. If anything, I love STICKING IT TO THE MAN even more.

I consider both must-haves for anyone who has an interest in vintage paperbacks — even if that interest is simply in discovering reading ideas. If you’re also interested in the social context of paperbacks published from the ‘50s to the ‘80s, they’re even more essential.

Nette and McIntyre titled their introduction: “A Total Assault on the Culture? Pulp and Popular Fiction during the Long Sixties.”

As they explain, the term “the Long Sixties” refers to the fact that “many of the key social and political trends associated with the era extended back into the previous decade and didn’t fully unfold until the mid-1970s.” 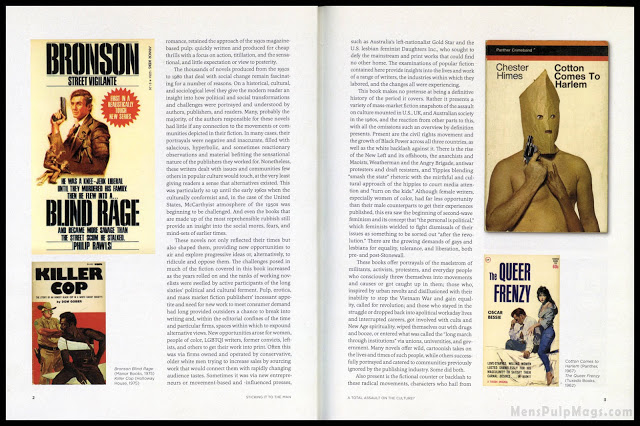 They note that those decades were not only a time of great social and political upheaval but also the heyday of paperback novels. And, they rightly point out the links between paperbacks and pre-‘60s pulp magazines, explaining: “This fiction, particularly in the fields of crime, erotica, thrillers, and romance, retained the approach of the 1930s magazine-based pulp: quickly written and produced for cheap thrills with a focus on action, titillation, and the sensational, and little expectation or view to posterity.”

One of the other things they say in the intro reinforces my feeling that their view of the paperbacks they write about is similar to my view of men’s adventure magazines published during the same decades.

Vintage paperbacks and MAMs both help illuminate many aspects of mid-20th Century culture.

But Nette and McIntyre never lose sight of two other key attributes of vintage paperbacks and MAMs: they were (and still are) a form of entertainment, and the cover art (and in the case of MAMs, the interior art as well) is often great.

“Most importantly,” they say in the intro, “the majority of the books covered within are entertaining. Some thrillingly so due to their fast-paced, action-packed, and unpredictable plots, chilling insights and heart wrenching pathos. Others are arresting and hilarious for all the wrong reasons…And then of course, there are the covers, of which we’ve included more than 350.”

The page scans in this post provide peeks at some of my favorite chapters in STICKING IT TO THE MAN. All of the chapters are brimming with information and insights about vintage paperbacks and writers. Your favorite chapters may — and likely will — vary, since the book covers many subgenres and locations.

One of my own faves was written by Nette: “Blowback: Late 1960s and ’70s Pulp and Popular Fiction about the Vietnam War.”

I have longstanding interest in novels set in the Vietnam War or involving Vietnam veterans and Nette covers some of the best, like Robert Stone’s DOG SOLDIERS (inspiration for the 1978 film WHO’LL STOP THE RAIN).

He also reviews lesser known American novels I didn’t know of, as well as Australian novels about Aussie soldiers who served in Vietnam and other Australians who were affected by the Vietnam War.

About 60,000 Australian soldiers, air force and navy personnel served in Vietnam between 1962 and 1972. So, it makes sense that there are Australian novels about the war. But until I read STICKING IT TO THE MAN, I was unaware of them. 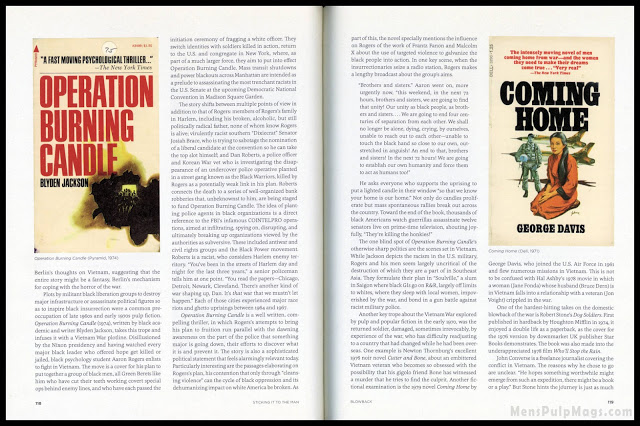 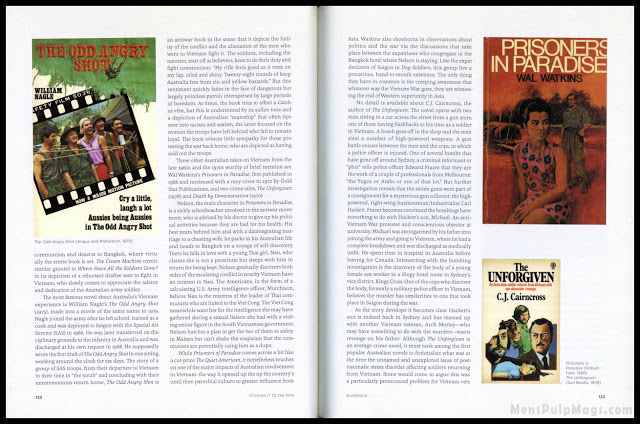 In fact, Nette’s Vietnam chapter is a prime example of why STICKING IT TO THE MAN is such a must-read for fans of vintage paperbacks.

Whatever subcategories of vintage paperbacks you enjoy, you’ll learn about many others in those subcategories you never heard of or were dimly aware of — and discover some you’ll definitely want to read. In addition, you’ll likely learn things you didn’t know about the novels and authors you’ve read. And, you’ll find a lot of information about how the books and writers covered fit into, reflect or, in some cases, influenced the cultural changes that were happening in “the Long Sixties.”

“‘Up Against the Wall, Motherfucker!’ The Yippie Literaries” and “Lithe, Lusty, and Liberated: ‘Pulp Feminism,’” both written by contributor Bill Osgerby; 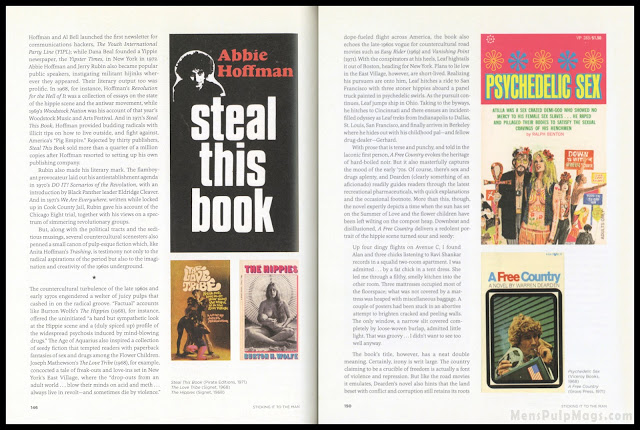 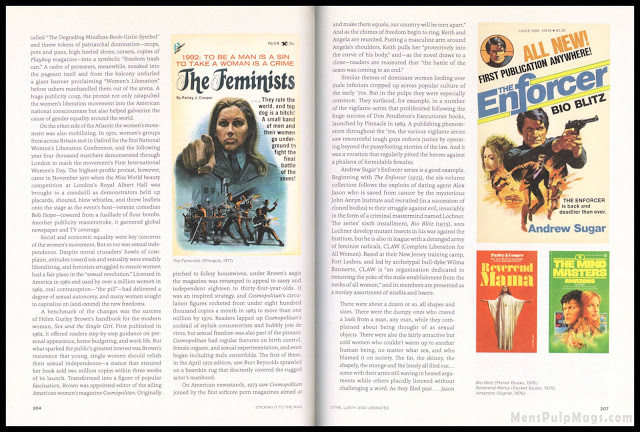 “Canadian Carnage: Quebecois Separatism through the Lens of Men’s Adventure Novels” by Iain McIntyre and “Shafted: On Ernest R. Tidyman and the Makings of Shaft” by Michael A. Gonzales; 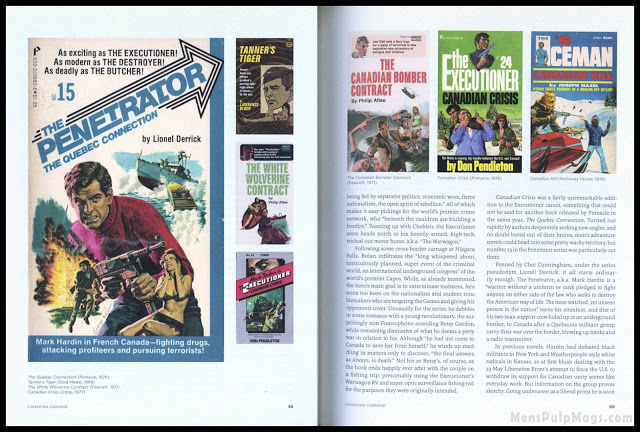 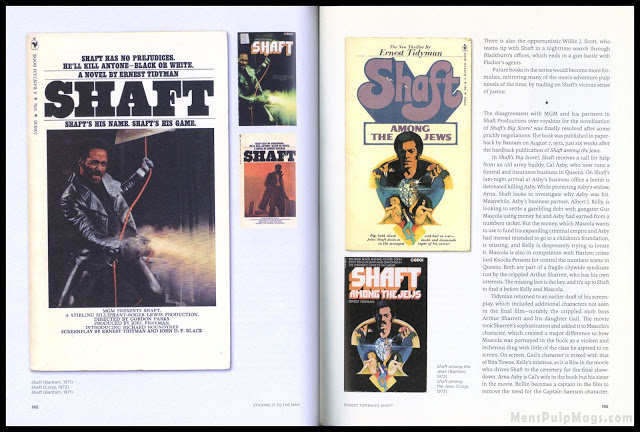 “All Our Heroes Are Dead: Fictional Vigilantes of the Seventies” by David James Foster and “Lone Wolf: The Vigilante Novels of Barry N. Malzberg” by Andrew Nette; and, 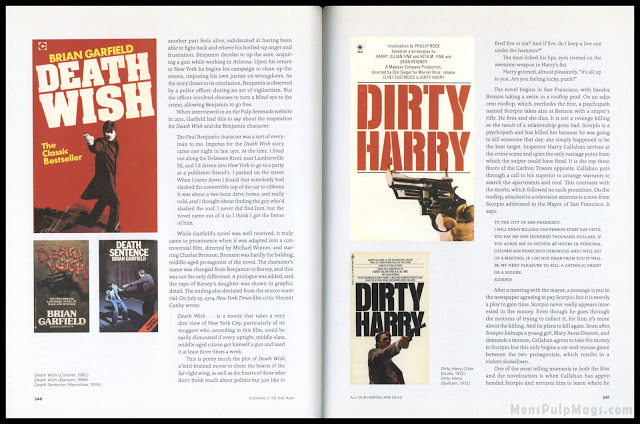 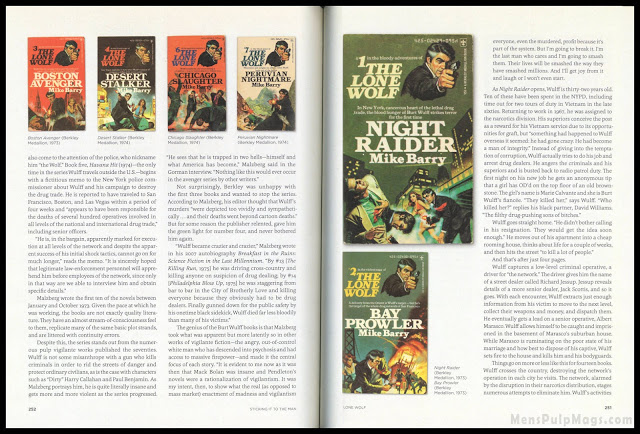 “Black Samurai, Marc Olden” by Andrew Nette and “The Cool, the Square, and the Tough: The Archetypes of Black Male Characters in Mystery and Crime Novels” by Gary Phillips. 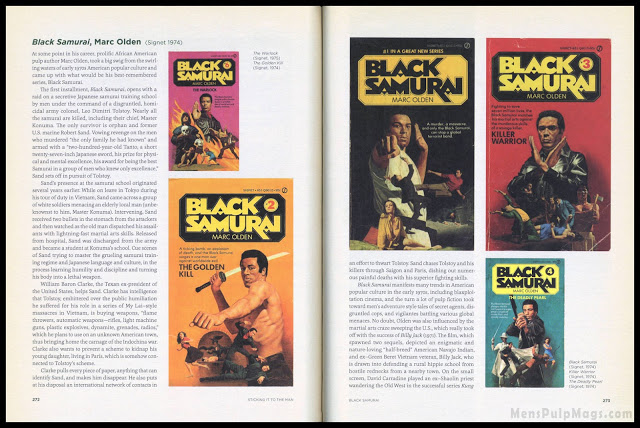 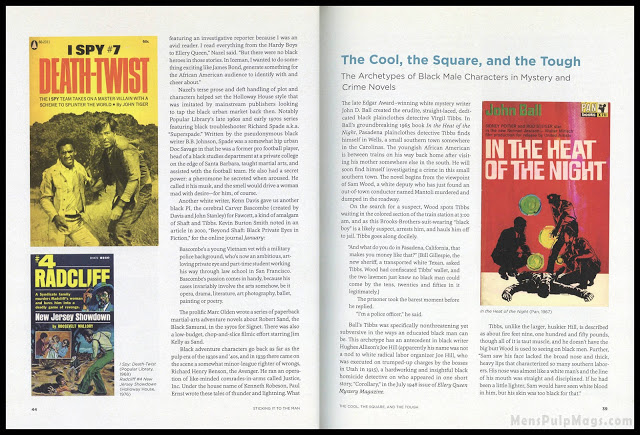 Those examples just scratch the surface of what’s in STICKING IT TO THE MAN. It’s an amazing feat of collaborative research and writing and on my list of the best books about books I’ve ever read.

Nette and McIntyre have already announced plans for their next project: a book that will feature cutting-edge science fiction paperbacks. The title is DANGEROUS VISIONS AND NEW WORLDS: RADICAL SCIENCE FICTION, 1960 TO 1985. When it’s released, I’ll be buying it.