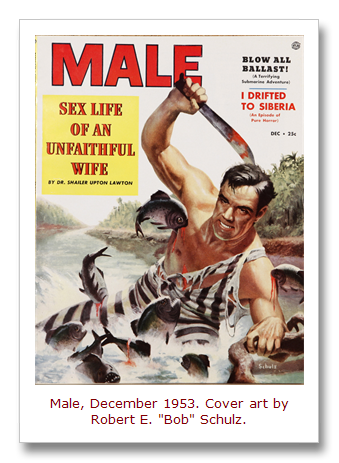 It was just cheesy enough to be enjoyable, if you enjoy cheesy Grade-B horror movies (which I do).

Of course, Mega Piranha was, er, spawned by the classic 1978 movie Piranha and it’s sequels — which are descendants of movies and TV shows from the 1950s and 1960s that used scenes of water boiling with piranhas as plot devices.

Those, in turn, were inspired by tales of voracious piranhas in books and magazines.

Teddy Roosevelt is generally credited with starting the mythology of flesh-stripping schools of piranha in his 1914 travelogue Through the Brazilian Wilderness. 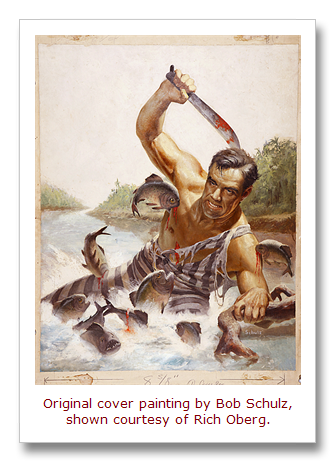 He dubbed them “most ferocious fish in the world” and described a feeding frenzy that quickly turned a cow into bits of bloody bone (an event now believed to have been artfully staged by Teddy’s native guides).

In the Fifties and Sixties, men’s adventure magazines helped continue the legend of bloodthirsty piranhas in stories like the one I mentioned in a recent post about Brave magazine, “We Saw Them Eat Him Alive”.

One of my favorites is the cover of the December 1953 issue of Male magazine.

It was painted by the great illustrator Robert Emil Schulz (1928-1978), who was usually credited as Bob Schulz or Robert E. Schulz.

The original painting for that cover, shown at right, is owned by men’s pulp art collector and expert Rich Oberg.

Rich told me he considers Schulz “one of the best” — putting him in the same league with pulp art legends like Mort Kunstler, Norman Saunders and Norm Eastman.

In addition to doing cover and interior art for men’s adventure magazines, Schulz painted covers for many vintage paperback books.

Below are two nice examples: The Corpse Came Calling (1942), a Mike Shayne paperback by Brett Halliday and the Signet edition of Georges Simenon’s The Fugitive (1958). 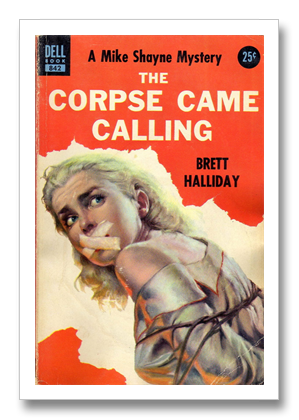 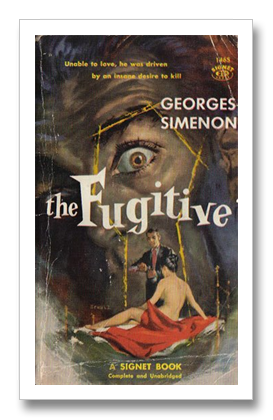 You can see more Bob Schulz paperback covers and read a longer bio about him on the Killer Covers blog, a site I highly recommend to fans of old paperbacks and pulp art.

There’s another excellent piranha attack cover painting on the December 1955 issue of Male. That one is by George Gross.

Like Schulz, Gross was a top notch artist who provided many cover paintings and interior illustrations for men’s pulp magazines, as well as for paperback and digest covers. Some wonderfully pulpy examples of the latter are showcased on the Vintage Paperbacks & Digests website, another site I highly recommend. 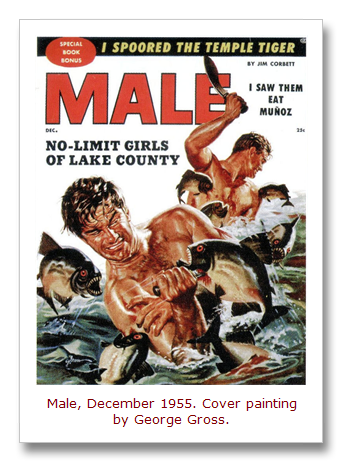 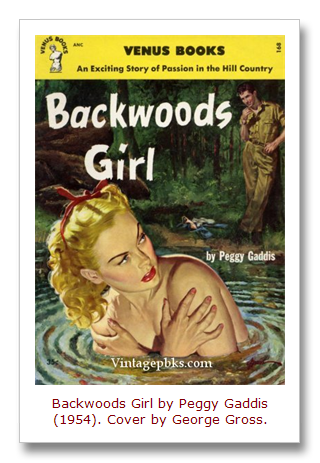 There’s also a piranha cover painting on the July 1957 issue of Man’s World, by an artist named Jim Bentley.

Bentley didn’t do many covers for men’s pulp magazines. But you may have seen him featured in one of the magazine ads run in the 1960s by Art Instruction Schools. It claimed that Bentley made a “handsome living” as a magazine and advertising illustrator, after taking AIS art classes and leaving his “dead-end job” as a repairman behind. 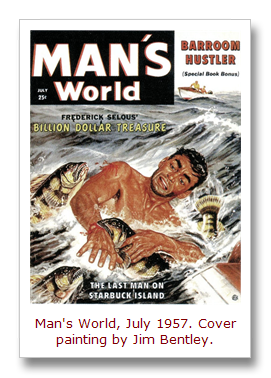 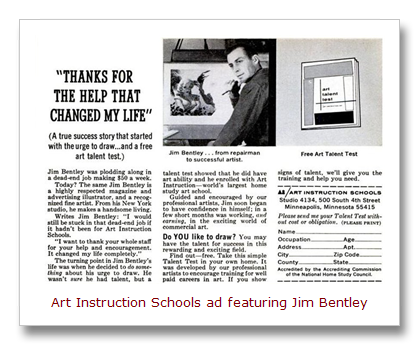 The venerable men’s magazine Stag used a piranha attack scene on its November 1954 cover. It was done by an uncredited artist and is kind of a fishy version of Stag’s “Mad Monkeys” cover.

The most outré piranha cover painting of all is by the master of over-the-top cover art, Norm Eastman. He managed to fit piranhas into the Nazi bondage and torture subgenre. 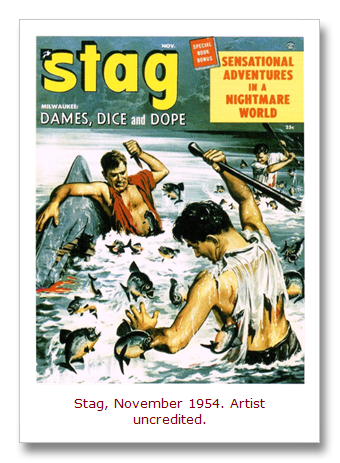 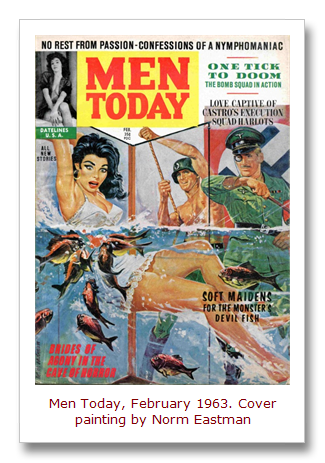 As explained in a previous post, Eastman brainstormed these weird torture methods with B. R. “Bud” Ampolsk, co-owner of Reese publishing, the company that published Men Today.

According to Eastman, Ampolsk told him “we had never done anything that the Nazis hadn’t actually done.”

Somehow, however, I doubt if you’ll find anything about the Nazi piranha torture technique in the history books.