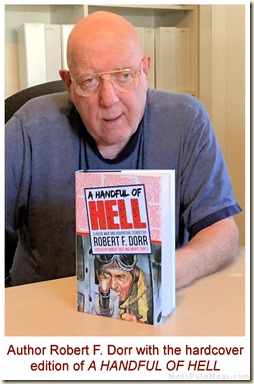 My previous post here featured excerpts from the introduction that author Robert F. Dorr wrote for A HANDFUL OF HELL, the fourth book in our Men’s Adventure Library series.

HANDFUL is a lushly-illustrated collection of classic men’s adventure magazine stories written by Bob Dorr in the 1960s and 1970s, before he became the renowned author of more than 70 military aviation history books and, during the past year, two novels.

– Excerpts from ROBERT F. DORR’S Introduction to A HANDFUL OF HELL –

Some of my men’s adventure magazine stories from the mid-1960s depict everyday Americans in uniform, facing dire situations and doing spectacular things in the midst of war. 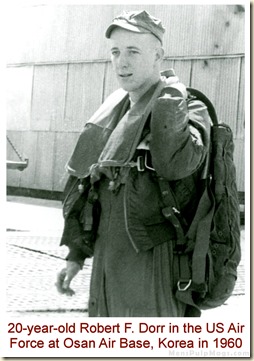 A fictional example is my story about Captain Sidney Curtiss, the hero of “Fish Him Out—Or Else” from MAN’S MAGAZINE, December 1966.

He is an imaginary composite of several real F-105 Thunderchief pilots who were shot down and rescued during the air campaign against North Vietnam.

The portrait photo used to represent him in the story is a photo of a friend of mine.

It was one of a number of tales of air warfare I wrote that involve flying into the enemy guns and surviving—usually.

A similar example is my is my tale of besieged helicopter crews and GIs in the June 1967 issue of MEN magazine, “5 Downed GIs Who Gutted Ambush Alley.”

Two of the stories I wrote about five years into my Foreign Service career, when I was stationed in Japan, featured Medal of Honor recipients.

One was about U.S. Army Sergeant Tom Baker.

He died in a point-blank firefight with Japanese troops on Saipan, in the Mariana Islands in 1944, when a small number of American soldiers were overrun by several thousand Japanese troops.

Of course, there was no Internet when I wrote my story about him, published as “The Day the Boondocks Ran with Yankee Blood” in BLUEBOOK FOR MEN in 1969.

Today, with a quick search online, you can easily find and read the official Medal of Honor citation for “Baker, Thomas A.” on the website of the U.S. Army Center of Military History.

If you do, you’ll discover an account of Baker’s heroism that is less embellished than mine but awe-inspiring in its own laconic way. 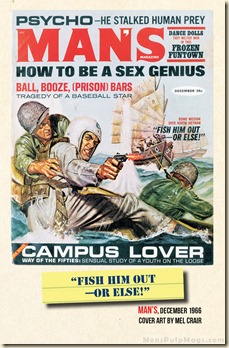 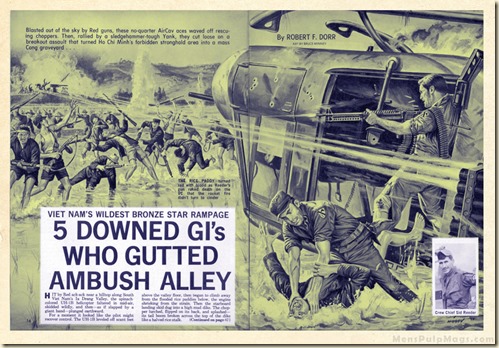 Another Medal of Honor recipient I wrote a story about that year was Angelo James Liteky, who later changed his name to Charles James Liteky.

He’s a priest who served as a military chaplain during the Vietnam War. For his heroic efforts to save wounded American soldiers in 1967, he received the Medal of Honor.

After the war, he continued to be a man of indomitable courage and strong convictions.

He opposed the Catholic Church’s celibacy requirements for priests and left the church to marry. In 1986, he renounced and returned his Medal of Honor in protest over U.S. training of military personnel who served the interests of dictators in Central America, at the School of the Americas at Fort Benning, Georgia. 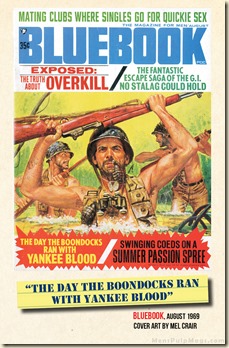 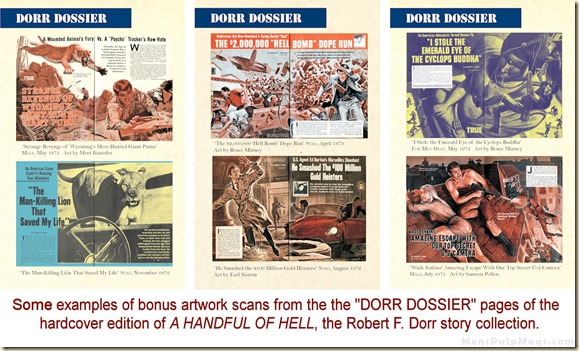 My story about Liteky is limited to the combat action for which President Lyndon Johnson presented him with the Medal of Honor in a White House ceremony.

He wasn’t controversial then. But for some reason it wasn’t an easy story to sell.

In April 1969, I submitted it to Editor Phil Hirsch at MAN’S MAGAZINE, using letterhead from the Hotel Akahane in Tokyo.

Phil decided not to use my Liteky story, but he sent me a nice rejection note. 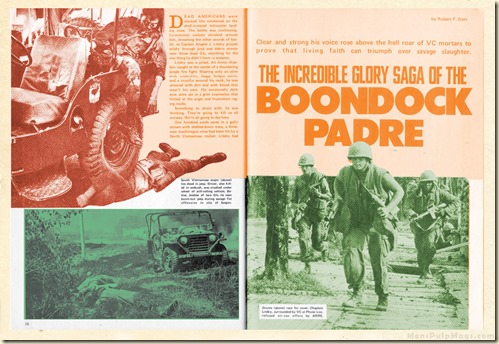 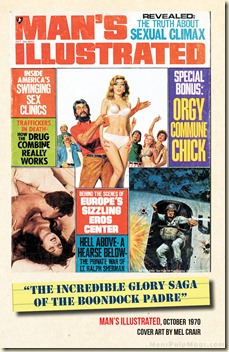 In May 1969, I sent the story to Editor Carl Sifakis at MALE magazine. Carl sent back a handwritten note: “Sorry, we’ve done Liteky.”

So, I submitted it to B. R. Ampolsk. He owned and edited the publishing companies Q.M.G., Reese and EmTee, which published many men’s adventure magazines of varying quality.

My Liteky story finally appeared in the October 1970 issue of his magazine MAN’S ILLUSTRATED, October 1970 under the title “The Incredible Glory Saga of the Boondock Padre.”

The collection of character-driven, narrative stories that editors Bob Deis and Wyatt Doyle chose for this book reflect a different era, the 1960s and early 1970s.

In that era, American men who were not anti-war protesters or egghead intellectuals saw war and action stories in strange-sounding, exotic foreign lands as interesting, entertaining and manly.

Some of the adventurers in stories I wrote for them evoke Indiana Jones, who hadn’t been invented yet but must have been inspired by the men’s pulp adventure mag genre.

Indy’s kind of adventurer would have fought those dirty commies in Guatemala, like my character in “I Fought Castro’s Cutthroat Guerrilla Squad” from FOR MEN ONLY, April 1970. 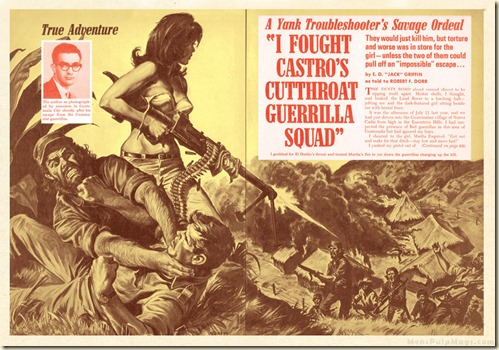 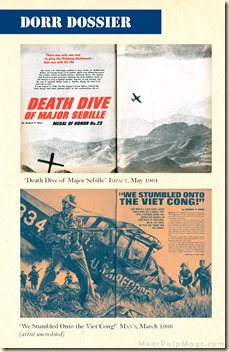 Indy could also have crossed paths with the evil sheik in the fictional Arab kingdom of Maraq, which I created for my story in a 1971 issue of FOR MEN ONLY about a Yank soldier of fortune who uses a cross-dressing ploy, wonderfully depicted by artist Earl Norem.

Indiana Jones could also have encountered nefarious commies in Burma, like those I depicted in a story in BLUEBOOK, March 1972.

Then there’s my character Bud Prather, in “Borneo Longshot” from MALE, March 1970.

Bud parachutes into Borneo on a perilous search mission in territory ruled by Nalao headhunters.

When I wrote it, literacy rates in the United States were higher than today, many men were veterans who’d done service and many could find Borneo on a map. But in civilian life, few had any realistic hope of ever traveling to such exotic places. [Editor’s note: The photo of the character Bud Prather in the “Borneo Longshot” story is actually a photo of author Robert F. Dorr.] 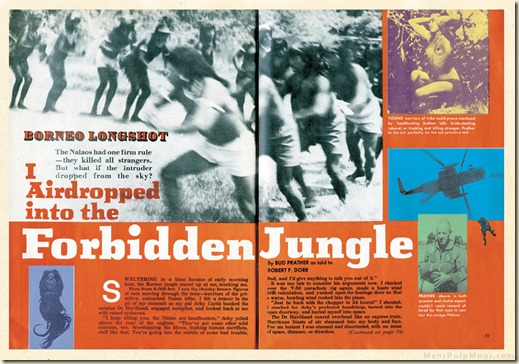 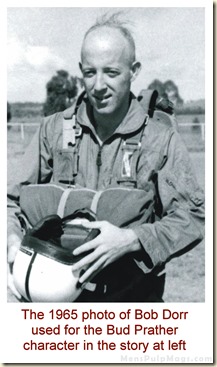 For the men’s adventure magazines I wrote some articles about well-known American heroes, like Medal of Honor recipients. But generally they were war and adventure stories with a realistic-sounding factual type background.

Those were the most common thing I wrote for the men’s pulp magazines until the magazines started changing in the late 1960s.

As they evolved to compete with magazines like PLAYBOY and HUSTLER, they had covers with photos showing fully exposed female nipples instead of painted covers and the types of stories changed.

I think people often do too much over-analyzing of such stories. I wrote many for the men’s pulp magazines and it would involve too much analyzing for me to say a great deal about them. But I can tell you there was no first hand research involved. 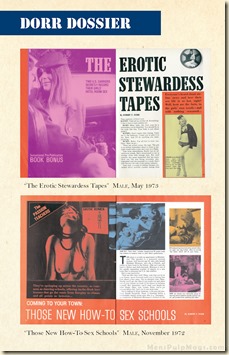 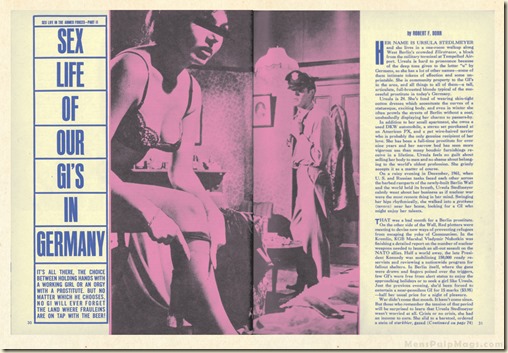 An update on Robert F. Dorr…

On November 17, 2015, Bob announced on his blog that he had a brain tumor; specifically a Glioblastoma Multiforme brain tumor, the most common but also the most aggressive kind. 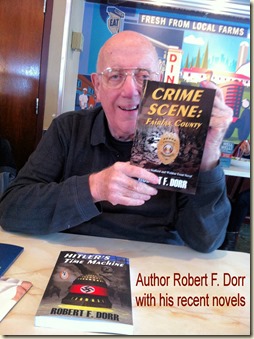 In December, he had successful surgery to remove it. Then he underwent chemotherapy and radiation treatments.

As I write this, Bob is still with us and still in good spirits. Unfortunately, his prognosis is not good.

“This type of tumor is always fatal. As one of my doctors, a sports fan, puts it, ‘It’s undefeated.’

Depending on what you read, and how you respond to the three forms of treatment, surgery, radiation and chemo, life expectancy runs from three months to fifteen.”

Bob resolved to use whatever time he has left doing the things he loves. In addition to spending time with his family and friends, he has continued to write every day.

Not long after his surgery he published CRIME SCENE: FAIRFAX COUNTY, a mystery novel that features characters from his popular alternate history novel HITLER’S TIME MACHINE.

Bob recently told me he is now working on another novel, despite the fact that the effects of his brain tumor and surgery have made typing a slow process for him.

He has also been posting on his Facebook page and various Facebook groups, including the Men’s Adventure Magazines Facebook Group — which Bob suggested that I create back in 2009, shortly after I first connected with him via email.

In addition, over the past two months, he has written a fascinating and poignant series of blog posts about friends, colleagues and writers who have influenced his life.

I can say this: Robert F. Dorr has definitely influenced mine. He is an inspiration, as a writer and as a human being.

I will be forever grateful to have had the opportunity to get to know him. And, I am honored to have been able to work with him on our collection of his classic men’s adventure magazine stories, A HANDFUL OF HELL.