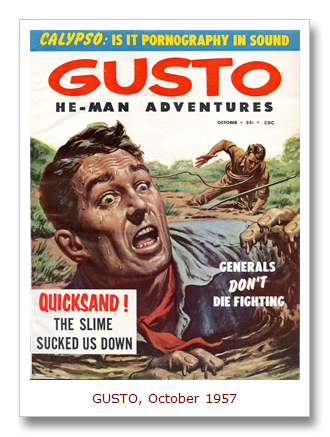 The low-cost postage rate allowed by such a permit, now called the Periodicals rate, makes it financially feasible for publishers to mail magazines to subscribers. (A standard rate based on weight would be too expensive.)

During the heyday of men’s adventure magazines, in the 1950s and 1960s, the USPS could deny periodical rates to magazines deemed “obscene.”

It still has that authority. But, of course, the legal definition of “obscenity” in the Fifties and Sixties was much stricter and more absurdly Puritanical than it is today.

Gusto was pretty similar to many other men’s adventure magazines being distributed via second class mail permits at the time. And, it was tamer than the girlie bachelor mags, like Playboy, which (unlike Gusto) showed women with fully-bared breasts in their photos and had millions of subscribers.

Nonetheless, Arnold Magazines’ request for a second class mailing permit for Gusto was denied by the Postal Service. Or, more specifically, it was denied by a diligent Postal Service bureaucrat working on the front lines of the fight against smut and sleaze: Hearing Officer William A. Duvall. 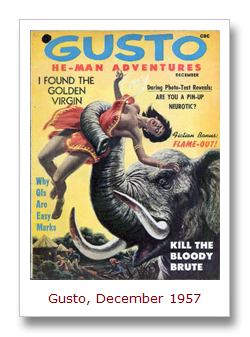 Duvall’s decision was in the report he issued on November 8, 1957. It was based on his review of the first two issues of Gusto: the October 1957 and December 1957 issues.

Only one additional issue of Gusto was published (dated February 1958), largely because of Duvall’s decision.

Of course, in order to come to a conclusion, Duvall had to carefully study and read the contents. (Poor guy!) And, in his report, he wrote up his basic observations and descriptions of each story.

“It must be said that there is no article of any scientific merit in the October issue, and if there is any literary merit to any of them it is only to a minuscule degree.,” Duvall noted. “As to ‘other merit,’ it is presumed that to some readers some of the articles have some merit from the standpoint of the entertainment which may be derived from reading adventure or horror stories.”

“In this last category would be placed the story of the death of the geologist in the Louisiana quicksand, the fight of the man with the alligator and the headhunter attack on the hunters in Africa. Another article tells of the suffering of a narcotic addict as he tries to struggle through the rehabilitation treatment back to a normal life, and, finally, there are articles criticizing the military, or at least holding the Army up for ridicule, because of the alleged fact that so few generals die in battle, and because of alleged defects in army weapons.” 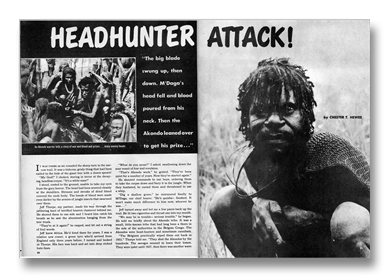 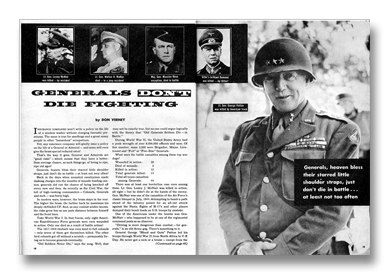 “The remainder of the text of the October issue is composed of the recounting of the vice in Corpus Christi, illustrated with pictures of girls obviously depicting prostitutes; quotations of sexually suggestive language from calypso songs [NOTE: See my previous post about this article]; accounts of the lives of young girls dedicated by their parents to satisfy the lust of the priests in certain Indian religions, and given to a life of sexual promiscuity…” 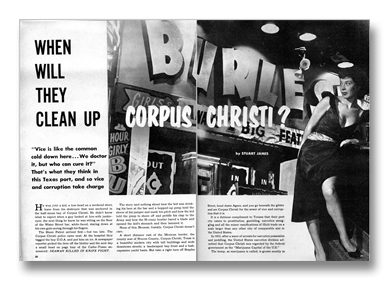 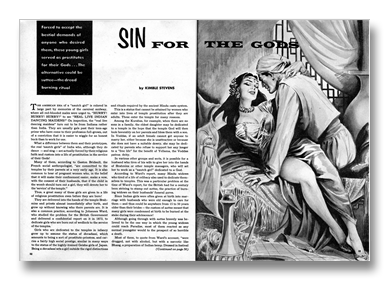 “In addition, there are the picture articles entitled ‘Gusto’s Gal’ and ‘They Call Her Frenchy.’ These articles consist of numerous pages of pictures of voluptuous-looking young women in varying degrees of undress and in many sexually provocative poses, with various parts of their anatomies exposed. The cartoons found in different places in the magazine serve only to accentuate the general aura of sensuality pervading it.”

“Gusto’s Gal – Four pages, eight pictures of shapely girl, various stages of undress, breasts are obviously bare but are not completely shown in any picture, but in many of them large areas of the breasts are exposed.”

“The Good Life – Cartoons having a sexual theme.” 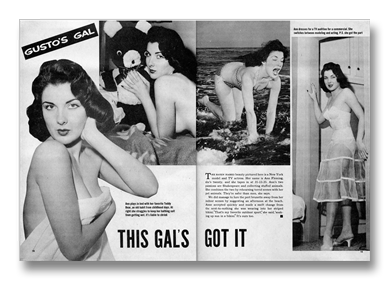 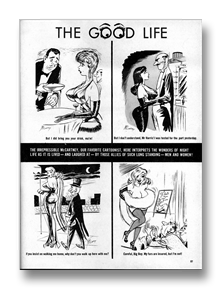 “They Call Her Frenchy – Picture article showing shapely young girl. Some pictures show her buttocks, some show large areas of her breasts, all show her in scanty attire or filmy, partly transparent garments.” 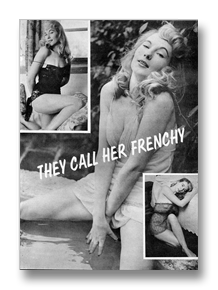 “Words are inadequate to convey the impression created by the two issues of this publication, but inspection leads one to the firm conclusion that the dominant theme and effect of them, taken as a whole, is an appeal to prurient interest.”

“The October and December, 1957, issues of the publication ‘Gusto’ are, when considered as a whole, dominated by material of an obscene, lewd, lascivious, indecent or filthy nature…and are not entitled to entry into the mails as second-class matter in accordance with Sections 224 and 226, Title 39, United States Code.”

Having killed off Gusto magazine, Hearing Officer Duvall was presumably proud to have done his part to save the world — and the eyes, minds and precious bodily fluids of the people of America — from another grave threat posed by a men’s pulp magazine.