A number of artists who provided artwork for men’s adventure magazines are also known for their horror-related artwork, such as Basil Gogos, James Bama and Norman Saunders. 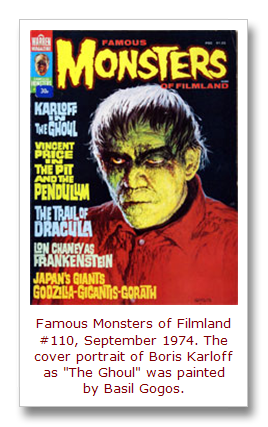 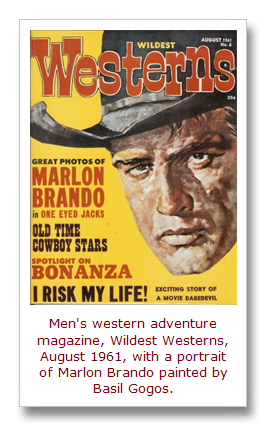 As horror fans know, Basil Gogos created many of the most popular and visually striking covers for Warren Publishing’s magazines, Famous Monsters of Filmland, Creepy and Eerie. His paintings of Boris Karloff as the Frankenstein monster are among his most famous. He also painted Karloff portraying other horror film characters, including The Mummy and The Ghoul.

In the 1960s, Gogos also did cover paintings and interior art for men’s adventure magazines. Two of my favorite examples are the “cave men” covers shown below, from the February 1960 issue of Man’s Action and the June 1960 issue of Wildcat Adventures. 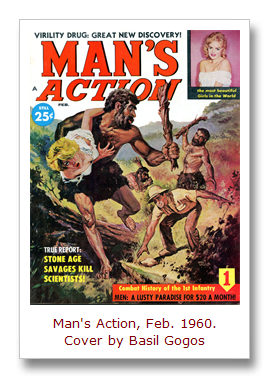 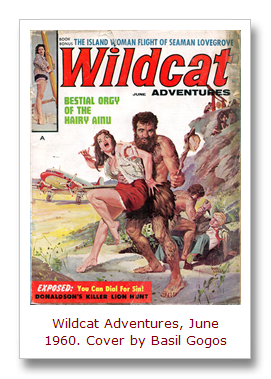 These Gogos covers definitely have a horror film feel. Indeed, they look like they could have been posters for an old Grade-B horror-style caveman movie, like Eegah! (a 1962 film that starred Richard “Jaws” Kiel as a giant caveman).

James Bama is another talented artist whose work is familiar to both horror fans and collectors of men’s pulp magazines.

Bama is widely known for the covers he painted for Bantam’s Doc Savage paperback reprint series. But horror fans will also recognize the cover art he did for the boxes used for Aurora’s plastic monster models in the 1960s. 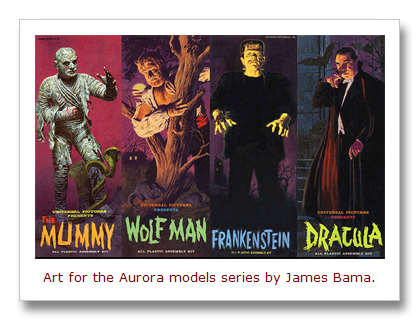 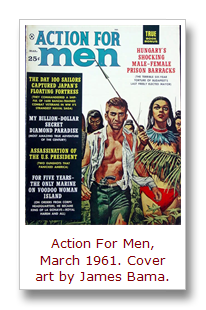 I also recently stumbled across a connection between one of the greatest pulp artists of all time – Norman Saunders – and the Frankenstein monster.

In addition to providing artwork for pre-WWII pulp magazines, postwar men’s adventure magazines and the wild Mars Attacks trading cards of the 1960s, Saunders painted covers for many comics – including the cover of the 1969 Classics Illustrated version of Frankenstein by Mary Shelley. Of course, in terms of horror, Saunders’ Frankenstein painting pales in comparison to some of the cover paintings he created for the prewar pulps and postwar men’s adventure magazines. 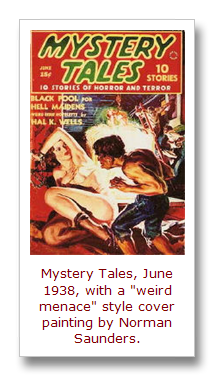 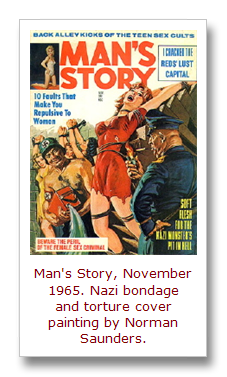 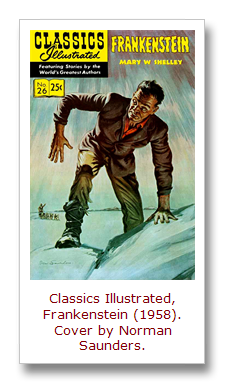 Saunders painted a number of “weird menace” covers for pre-WWII pulp magazines. He was also a master of the Nazi bondage and torture art common on covers of men’s pulp magazines in the 1960s and early 1970s.

The scenes depicted in those bondage and torture covers – and on the bloody “Weasels Ripped My Flesh” style “killer creature” covers that were popular on vintage men’s adventure magazines – include key elements that are shared by the horror genre: evil people, bloodthirsty creatures, plenty of gore, scantily clad damsels in distress and a bit of sex.

I think these elements are in both genres for same reasons. They provide titillating, vicarious thrills, scares and fun. But they’re not real, illegal or dangerous. So, they are scary but “safe.” We can view them as interesting and cool, rather than as truly horrific – such as the things we see all too often on the nightly news.