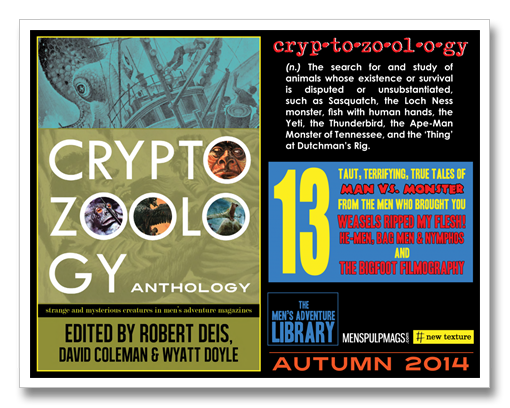 The first was WEASELS RIPPED MY FLESH! That one includes the famed killer weasels yarn we used as the book’s title and a wide-ranging sampler of men’s adventure magazine stories, many by writers who wrote for men’s pulp mags before they went on to greater fame, such as Lawrence Block, Robert F. Dorr, Harlan Ellison, Bruce Jay Friedman, Robert Silverberg and Walter Wager.

The WEASELS anthology also includes an interview with Mario Puzo about his work as a writer for the Magazine Management Diamond-Atlas magazines (FOR MEN ONLY, MALE, MEN, STAG, etc.) before his novel THE GODFATHER made him hugely successful.

The Puzo interview was conducted in 1984 for SWANK magazine by our WEASELS co-editor, writer and musician Josh Alan Friedman. (Josh’s critically-acclaimed book BLACK CRACKER is also a New Texture publication.)

In his interview with Josh, Puzo gave special praise to Walter Kaylin, a less well-known writer who also created ripping yarns for Mag Management’s men’s adventure magazines from the mid-1950s to the mid-1970s. After we learned of the high regard that Puzo and other veteran writers and editors, like Bruce Jay Friedman and Mel Shestack, had for Kaylin, we decided to feature his stories in our second anthology: HE-MEN, BAG MEN & NYMPHOS.

It will also include a special introduction by our friend Dave Coleman, author of THE BIGFOOT FILMOGRAPHY and THE BIPOLAR EXPRESS. 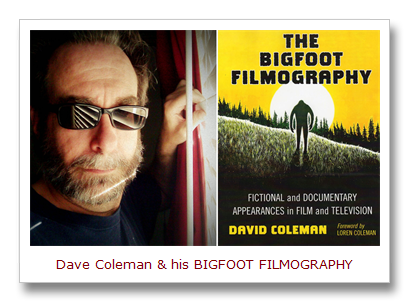 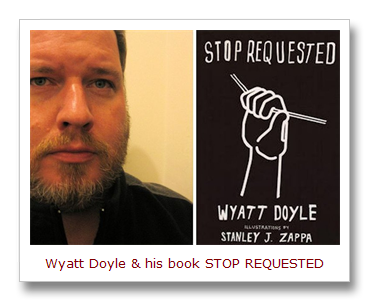 In addition to being the writer of several books, Dave is a former Hollywood script doctor and blogger who is now widely known as an expert on the man-like monsters from the realm of cryptozoology. That group of creatures is referred to as “Hominid cryptids” by cryptozoology mavens and enthusiasts. (Or sometimes “cryptid Hominids.)

America’s most famous cryptozoologist Loren Coleman (a friend of but no relation to Dave) explained the origin of the term cryptozoology in his excellent book CRYPTOZOOLOGY A TO Z.  It’s a fusion of three Greek words: crypto, meaning “unknown” or “hidden,” zo meaning animals,  and ology, “the study of.” In other words, it’s the study of unknown or hidden animals.

Coinage of the term is often credited to Belgian zoologist Bernard Heuvelmans, who wrote a seminal book about the topic in 1955 titled ON THE TRACK OF UNKNOWN ANIMALS.

But Heuvelmans credited it to another one of the fathers of the science (or some would say pseudoscience) of cryptozoology, zoologist and author Ivan T. Sanderson. 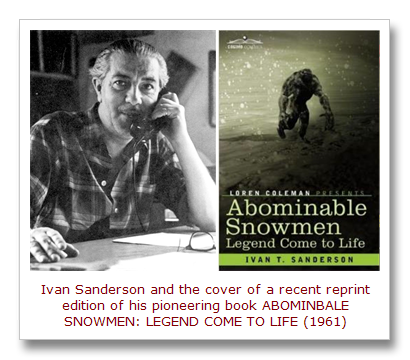 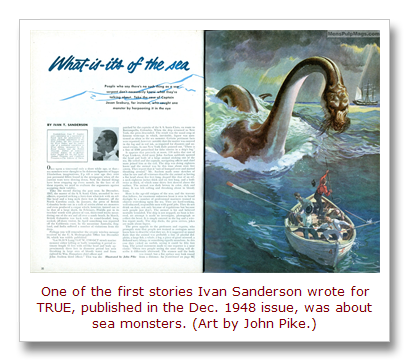 From the early 1950s until his death in 1973, Sanderson wrote a series of popular mainstream books about animals and natural history, starting with HOW TO KNOW THE AMERICAN MAMMALS (1951) and ending with GREEN SILENCE: TRAVELS THROUGH THE JUNGLES OF THE ORIENT (published posthumously in 1974)

In 1961, he wrote one of the pioneering books in the field of cryptozoology: ABOMINABLE SNOWMEN: LEGEND COME TO LIFE.

But his most notable contributions to cryptozoology were the many stories he wrote in the 1950s and 1960s about Yetis, sea monsters and other legendary creatures for the top tier men’s adventure magazines TRUE and ARGOSY.

In fact, for years, Sanderson held the title of “Science Editor” for ARGOSY. In that role he contributed dozens of widely-read and influential articles about Hominid cryptids, sea monsters and lake monsters.

One of the most influential and controversial was his story about the iconic shots of Bigfoot taken from the film made by Roger Patterson and Bob Grimlin. It was titled “FIRST PHOTOS OF ‘BIGFOOT,’ CALIFORNIA’S LEGENDARY ‘ABOMINABLE SNOWMAN'” and appeared in the February 1968 issue of ARGOSY. 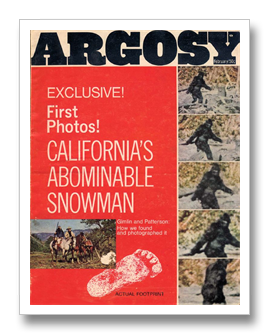 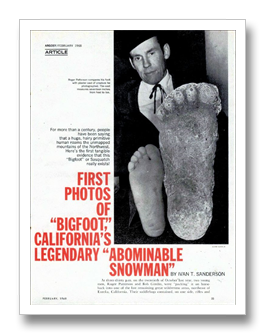 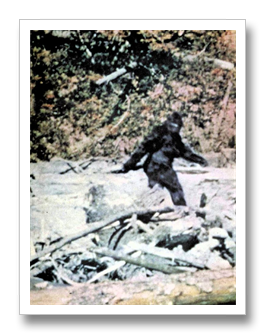 The story was a huge scoop for Sanderson and ARGOSY. It played an instrumental role in making Bigfoot famous, launching a slew of other magazine and newspaper stories, books and movies in the 1970s. It made Sanderson the biggest superstar in the realm of cryptozoology. And, it stamped a still-familiar visual image of Bigfoot into the consciousness of people around the world.

Sanderson was not the first contributor of stories about crypto creatures to men’s adventure magazines. SIR! magazine, one of the  men’s magazines that helped shape the men’s pulp adventure genre, had previously scooped mainstream magazines by publishing an early article about Bigfoot’s Canadian cousin Sasquatch in 1948 and went on to publish some of the first stories about the Abominable Snowman (aka the Yeti) in the early 1950s.

By an odd coincidence, Ivan T. Sanderson’s first notable cryptozoology for a men’s adventure magazine was also published in 1948. It’s an interesting overview of sea monster lore that appeared in the December 1948 issue of TRUE. 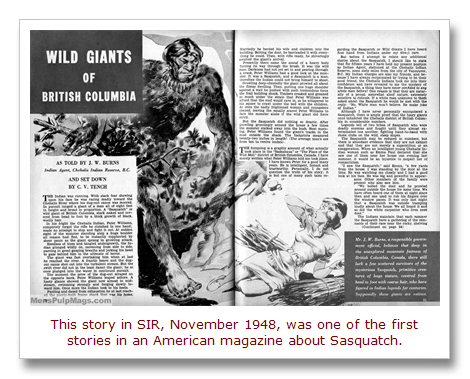 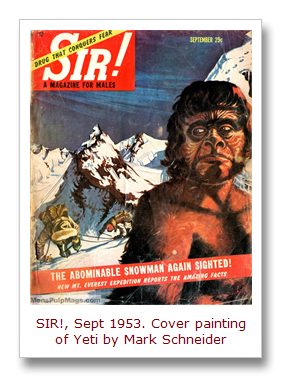 In the 1950s, 1960s and 1970s, stories about Hominid cryptids, sea and lake monsters, and other legendary creatures appeared in many of the most popular men’s adventure periodicals, like ADVENTURE, MALE, MAN’S MAGAZINE, MEN and SAGA, and in some of the more obscure ones, like RAGE, SHOWDOWN and TRUE WEIRD. 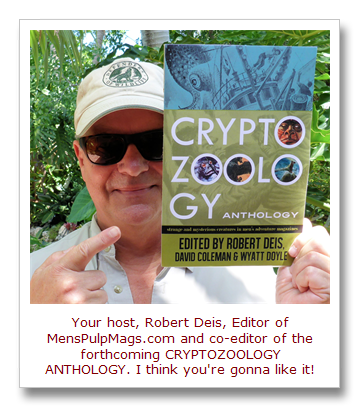 Our CRYPTOZOOLOGY ANTHOLOGY will include stories from all of those magazines and more, along with introductory chapters and commentary by Dave Coleman, Wyatt Doyle and me.

We’re especially pleased that we were able to get permission from the Arthur C. Clarke estate to reprint a classic crypto creature story he wrote for ADVENTURE.

We’re also delighted that we were able to get permission to reprint one of the crypto creature stories written by the late John A. Keel from Keel’s family.

Keel is probably best known as the author of THE MOTHMAN PROPHECIES, the 1975 book that was made into a movie starring Richard Gere in 2002.

Like Ivan T. Sanderson, John A. Keel was one of the “Founding Fathers” of both cryptozoology and UFOlogy (the study of flying saucers). He wrote many groundbreaking stories about cryptid hominids (and UFOs) that were first published in men’s adventure magazines.

News about our CRYPTOZOOLOGY ANTHOLOGY is already spreading in crypto buff circles. The first posts about it anywhere were on the popular Bigfoot Field Reporter website and associated Facebook page, maintained by Sharon Lee Lomurno.

Here’s another news flash about our CRYPTOZOOLOGY ANTHOLOGY. It will be published in full color in both print and ebook format. So readers will see just how cool the cover paintings of the magazines and inside illustrations really are.

Watch the posts here and in our Men’s Adventure Magazines Facebook Group for more info and an announcement of the publication date.