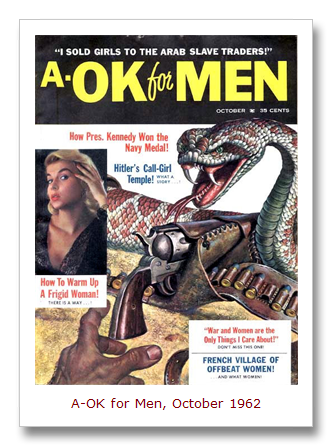 A-OK for Men was another men’s adventure magazine that didn’t last long. Apparently, only five issues were published between October 1962 and the fall of 1963.

The cover of the first issue has a terrific snake menace painting. And, the titles of the articles featured on it range from enticing to over-the-top. They include:

“I  SOLD GIRLS TO THE ARAB SLAVE TRADERS”
“Hitler’s Call-Girl Temple”
“How to Warm Up A Frigid Woman”
“War and Women are the Only Things I Care About”
“French Village of Offbeat Women!”

The first issue A-OK for Men also includes the article “How President Kennedy Won the Navy Medal.” Articles about John F. Kennedy’s military experience and famous PT 109 survival story were still popular in 1962, two years after he was elected President.

A year later, in November 1963, Kennedy was assassinated in Dallas. Of course, that sparked another trend in Kennedy stories – those speculating on who assassin Lee Harvey Oswald was working for and whether he really was “the lone gunman.”

A-OK for Men was published by Jalart House. Jalart published several other men’s pulp magazines in the Sixties, including Adventure True Story, Adventures for Men, Men in Danger and Thrilling Adventure, as well as pulpy true crime and detective magazines.

Jalart House also published some books with intriguing titles, like The American Handbook of Sex and Marriage, Hammering Hank, Memoirs of a Psychic and Astrologer and The Top 10 Book of Pro Wrestling’s Outrageous Performers, Punishing Piledrivers, and Other Oddities.

A-OK for Men was fairly racy for it’s time. It wasn’t one of the “leg shackler” style men’s pulp mags (the ones that had bloody bondage and torture scenes on almost every cover). But there was one Commie bondage and torture cover in the magazine’s brief run (the April 1963 issue). And, the other covers were a bit more risqué than covers on the more mainstream men’s adventure magazines of the early 1960s, like True and Saga. 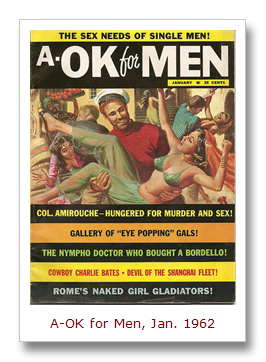 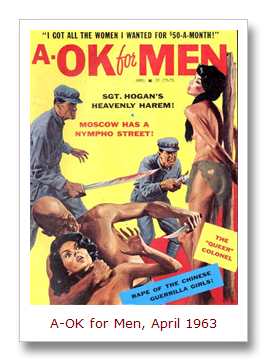 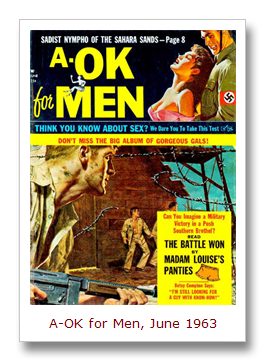 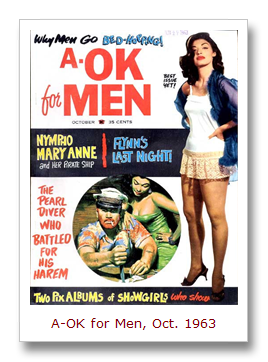 In my next post, we’ll take a peek between the covers of A-OK for Men. In the meantime, if you’re a fan of vintage men’s magazines, pulp art and pulp fiction, be sure to check out my new Men’s Pulp Adventure Store.