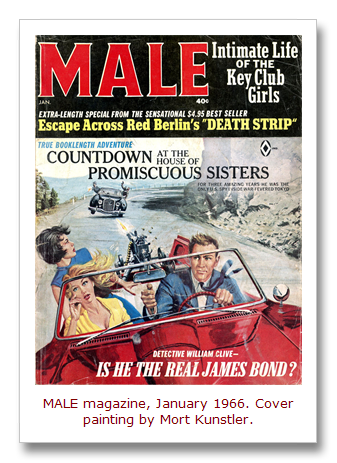 The January 1966 issue of Male magazine features a very cool, Sixties-flavored cover painting by Mort Kunstler that looks like a James Bond scene.

Quite a few of Ian Fleming’s stories about James Bond did appear in men’s bachelor and adventure magazines in the 1960s.

But this classic Kunstler cover is not for a 007 story by Fleming.

It’s for a story by Roland Empey titled “DETECTIVE WILLIAM CLIVE — IS HE THE REAL JAMES BOND?”

Empey reveals that Clive is a former British adventurer, spy and Scotland Yard detective who had retired to the island of Trinidad.

And, according to Empey: “In the view of many who would conceivably know, it was the young Scotland Yard detective who inspired Fleming to create James Bond.”

Indeed, the anecdotes told by and about Clive in this story do seem similar to some famous scenes in the James Bond books and movies.

It’s definitely something that could have been created by Q, the designer of deadly car accessories and gadgets in the Bond stories.

Empey quotes Detective Clive’s description of the car chase depicted by Kunstler and suggests that it may have inspired a similar car chase scene in the Bond movie On Her Majesty’s Secret Service.

“I was once chased along the Via Mercurio by three killers hired by Aunt Tina Lola,” Clive recalls. “Auntie was involved in a scheme to steal ten million dollars worth of paintings out of the Vatican and since I’d learned how she intended to do it, she had her people shooting for permanence. I was out for a spin with two girls — starlets from the film colony in Rome — when this black limousine got on my tail. I pushed my vehicle up to 127 but I still couldn’t shake them. Fortunately, they didn’t know about the brace of 30 caliber machine guns I’d rigged up in my car trunk for just such emergencies. Things worked by remote control. All I had to do was push a button on the dashboard, the trunk door flipped up and I let go with a twenty second burst that blew the limousine’s front wheels and killed the driver. Car went right off the road, skidded about 200 feet on its roof and burst into flames. The poor devils inside were all incinerated, I suppose. Didn’t take time to look. The ladies and I were late for a luncheon engagement…” 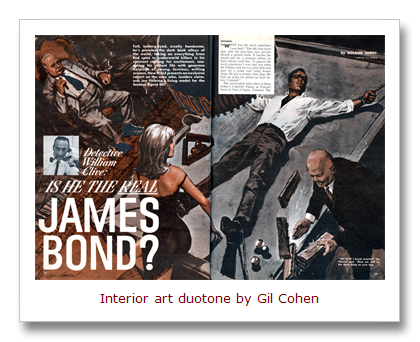 The interior painting for Empey’s story, by artist Gil Cohen, depicts another anecdote Clive tells, about the time he was strapped to a pool table and worked over by a bald Filipino karate expert.

Of course, this sounds similar to elements of the Bond movie Goldfinger, in which Bond is strapped to a table, with a deadly laser aimed at his crotch, and does battle with the bald Korean karate expert named Odd Job.

Well, I’ve talked to the author of this story and I believe I know the answer.

[UPDATE: You’ll soon be able to read it and decide for yourself. It’s one of the classic men’s adventure magazine stories included in the forthcoming anthology HE-MEN, BAG MEN & NYMPHOS, the follow-up to the WEASELS RIPPED MY FLESH! anthology.]

Walter wrote hundreds of men’s pulp mag stories, under his own name and as “Roland Empey.” He also sometimes wrote under the pen name David Mars.

As noted in a previous post featuring Walter’s story about the ill-fated USS Indianapolis, I made contact with him via Josh Alan Friedman. Josh’s father, the renowned novelist and playwright Bruce Jay Friedman once edited men’s adventure magazines for Martin Goodman’s Magazine Management company.

Friedman, Kaylin and Mario “The Godfather” Puzo all worked for Mag Management during the company’s heydays in the 1960s, and both Friedman and Puzo later named Kaylin as one of the greatest of all men’s adventure writers. 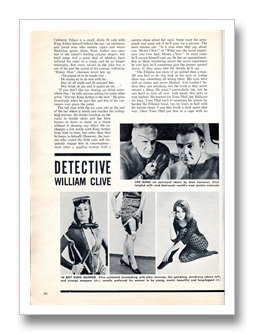 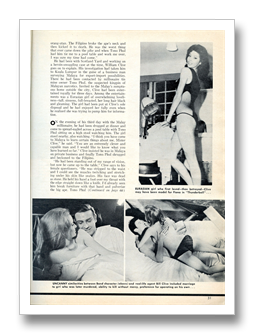 In a recent phone interview, Walter told me how he became one of the frequent contributors to Male, Stag, Men, For Men Only and other top men’s adventure magazines…

Were you a writer before you started writing for Magazine Management?

KAYLIN: Yes, I was in the Army during World War Two and got out in the late Forties. I enjoyed writing and managed to get a job as staff writer at Women’s Day magazine, where I mostly wrote articles about food. I also started writing other types of articles on the side. One day the food department editor saw me at my desk writing something that hadn’t the slightest thing to do with Women’s Day. And, very shortly thereafter I got fired.

KAYLIN: It was interesting, but I didn’t enjoy it much. About that time, I decided to move from New York to Los Angeles, with the idea was that I would just keep writing and become a freelance writer. I sold some stories to magazines like The Standard [a Canadian magazine]. But most of them only paid 75 or 100 dollars for a story, so I was doing very badly. Then I wrote a story that was published in the Saturday Evening Post, called “The Lady on the Island,” and it was picked as one of the best stories of the year in the Post. That was a very, very big thing to happen. And, I was paid 850 dollars, which was a great deal of money for me at the time. On the basis of that story, I decided to go back home to New York to be a writer there. 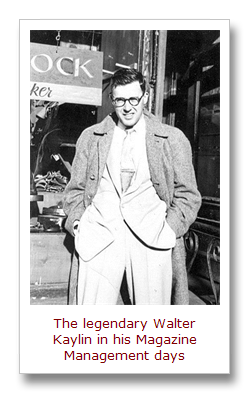 Is that when you first hooked up with Magazine Management, in the late 1950s?

KAYLIN: Yes. I actually worked at Magazine Management for quite a while. Bruce Jay Friedman was there ahead of me, and was an editor there, though I don’t think he was a senior editor yet, as he became later. I went there looking for a job where I’d only have to work for a few hours a day, so I could keep writing. I was interviewed by a secretary to Martin Goodman. He said something like, “You know if you want to work here, there’s a full time job for you, but we’re not taking on anybody who would just work part time.” I needed the job, so I took it and that’s how I went into Magazine Management.

When did you start writing stories for the men’s adventure magazines?

KAYLIN: After I had been at Magazine Management for a short time, Bruce and I made a nice connection and one day I suggested a story to him. He said I should go ahead and do it. And, he liked it very much. And, from then on, I wrote more and more stories and pretty soon I just quit the job and put all my time into writing the stories. I was replaced by Mario Puzo. He came in right after me.

In a previous interview I did with Josh Alan Friedman, Josh told me his father hired Mario Puzo as a staff writer and Associate Editor around 1959, before he became famous as author of The Godfather. Did you get to know Mario well?

KAYLIN: Yes, I did. Mario Puzo was one of the world’s nicest guys. He was a lovely, lovely fellow. Everybody loved him. Bruce used to have fun kidding about the way Mario used to invent entire wars in stories he wrote for the Magazine Management magazines. You know, we invented a lot of stuff. And, I really think the idea was to just have a lot of fun at what you were doing.

Do you remember writing the “Real James Bond” story or the story about the USS Indianapolis that I recently featured on this blog?

KAYLIN: No, I don’t as a matter of fact. You know I must have written about a thousand of those stories. And a lot of them I don’t remember at all. (He laughs.) You know I’m an old guy and I’ve forgotten stuff that happened yesterday. The fact that I don’t remember something from 40 or 50 years ago is not surprising.

EDITOR’S NOTE: Thanks again to Walter Kaylin for talking with me and allowing us to reprint his stories. Also, thanks to Walter’s daughter Lucy for his phone number and his daughter Jennifer for the photo.