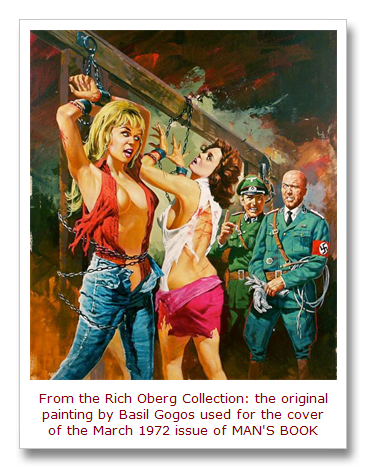 If you’re a regular reader of this blog, you probably know that Rich Oberg is the world’s foremost expert on and collector of men’s adventure magazine art.

Photos of original artwork and magazine covers in Rich’s collection also appear in other books that are must-haves for fans of vintage men’s magazines and pulp art, such as Volume 3 of Dian Hanson’s History of Men’s Magazines, and the lushly-illustrated books about artists Norman Saunders and Basil Gogos. 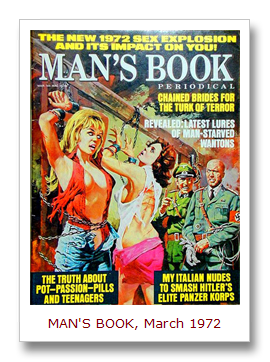 Rich has been very generous in sharing his unsurpassed knowledge of men’s pulp artists with me — and in sharing cover scans and photos of artwork from his collection.

He also occasionally posts images and comments in the Men’s Adventure Magazines Facebook Group that’s associated with this blog (which is another good reason to check out the FB site, if you haven’t done so yet).

Recently, for example, Rich uploaded photos of some wild Basil Gogos paintings that he owns.

Gogos is best known for his legendary movie monster artwork. But from the late 1950s to the mid-1970s, he also created many cover paintings and interior illustrations for men’s adventure magazines.

His work for the men’s pulp mags runs the gamut from “good girl art” to panoramic battle scenes.

The images Rich recently posted were examples of Gogos paintings that fit into the infamous bondage and torture subgenre of men’s adventure magazine art. (The kind of stuff that led to the nickname “men’s sweat mags.”)

Above is the original Gogos cover painting from Rich’s collection that was used for the March 1972 issue of Man’s Book magazine. It’s a classic Nazi bondage and torture scene showing scantily clad, busty babes in chains, about to be whipped (again) by Colonel Klink’s evil twin.

Below is the even wilder evil Nazi B&T painting that Gogos created for the April 1972 issue of Man’s Epic. The wicked combination of the hobbling bondage harnesses and punji-like stakes in this one are horrifically imaginative. 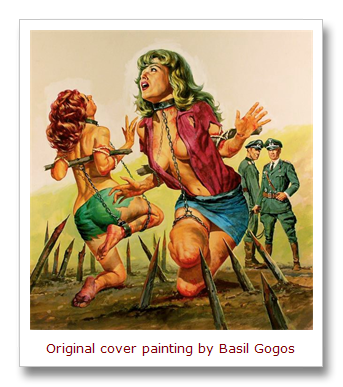 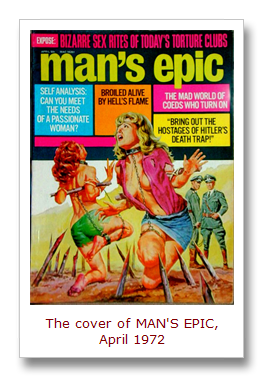 It almost looks like the poster for a 1970s horror movie. But it’s actually the cover painting used for the November 1972 issue of World of Men magazine.

As I’ve noted here before, horror movies provide an apt analogy for understanding the appeal of the bondage and torture art and stories used by men’s adventure magazines in the 1950s, 1960s and early 1970s. 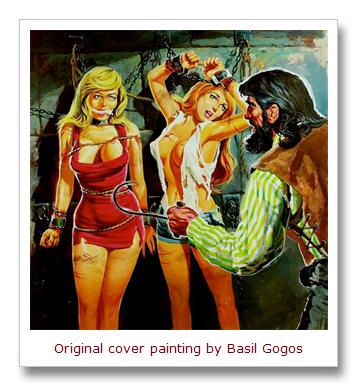 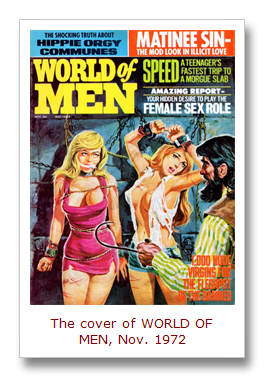 Yes, those kinds of movies show bad, evil, scary things. But they are entertaining if you’re able to appreciate them. Similarly, you can be a fan of the bondage and torture images and yarns in men’s adventure pulp mags without being a perve or a menace to society.

The original paintings shown above are cool, masterful examples of men’s adventure pulp art that have not been seen by many people.

Thanks again to Rich Oberg for making photos of them available to me and readers of the Men’s Adventure Magazines blog and Facebook group!

In my next post, I’ll show more Basil Gogos art. In the meantime, click this link and scroll down a couple of pages to see some previous posts that featured his work.