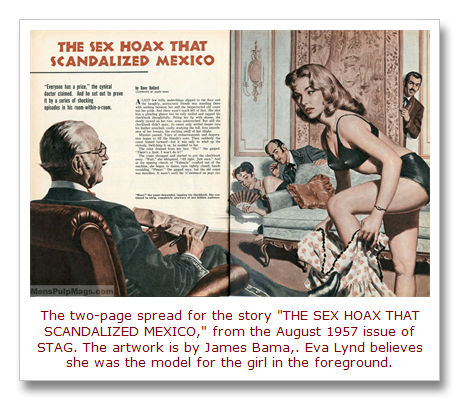 After I wrote my last post about model and actress Eva Lynd, I got an email from Eva that included a new revelation.

It was a scan of an interior illustration by artist James Bama from the August 1957 issue of STAG magazine, along with a brief note that said: “I think this is me.

I took one look at the face, hair and the slight cleft in the chin of the beautiful young girl taking off her clothes in the foreground of the illustration and she seemed unmistakable to me.

Unfortunately, Eva was so busy modeling for various artists and glamour photographers in the late 1950s, in addition to appearing in television shows, that she said she doesn’t have any memories of modeling for Bama.

But it makes sense that he used her as a female model for some of his illustrations.

Bama’s favorite male model was Steve Holland, the manly guy who became the iconic face and body of Doc Savage in the popular cover paintings Bama did for Bantam’s Doc Savage paperback series. And, Eva did many modeling sessions with Steve Holland for two other artists who used Eva regularly for their illustration artwork in the 1950s and 1960s – Norm Eastman and Al Rossi.

In fact, some of the coolest mementoes she has shared with me are reference photos Al Rossi took of Eva and Holland and later gave to her.

I’ve shown a couple in previous posts. Below are two more that are like gold to an Eva Lynd and Steve Holland fanboy like me.

Next to those photos is a paperback with an Al Rossi cover painting that Eva believes she modeled for: NUDE IN THE SAND by John Burton, published by Beacon in 1959. 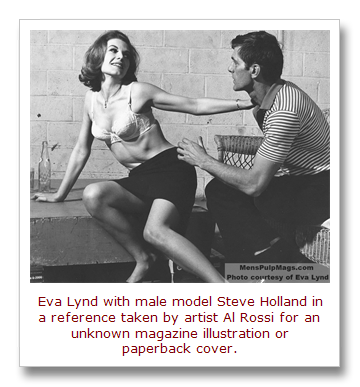 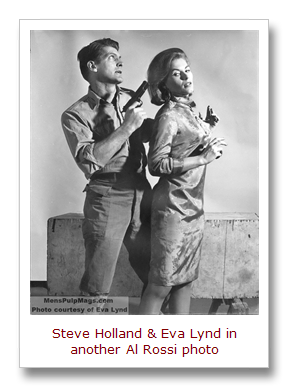 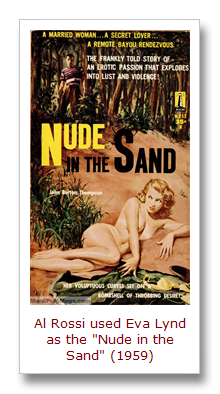 It’s not surprising that Eva isn’t 100% sure about that one, or about some of the magazine artwork that seems to feature her, like the James Bama illustration.

When illustration artists took reference photos of models for men’s adventure magazines and pulp paperbacks, they usually didn’t tell the models what story or book it was for. In fact, in many cases, the artists probably didn’t know the names that would be used for the stories or books themselves.

After I started writing posts about Eva on this blog and we struck up an ongoing correspondence, I began working with her and men’s adventure art collector Rich Oberg to try to identify which men’s pulp mag illustrations feature her. Through those discussions, we’ve IDed many issues with classic Norm Eastman cover paintings that I don’t (yet) have in my collection and was previously unaware of, such as MAN’S BOOK, December 1965, MAN’S STORY, August 1966 and MAN’S STORY, February 1967. 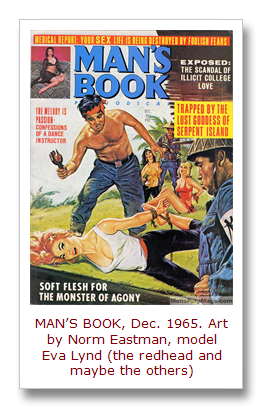 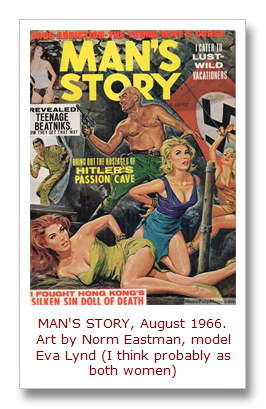 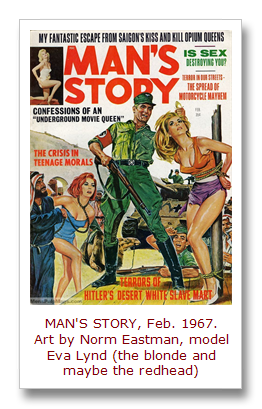 Even Eva and Rich are not always sure whether certain distressed damsels in Eastman cover paintings are her or Eastman’s other favorite models, Lisa Karan and Shere Hite. Their faces are similar to Eva’s. And, Eva, Rich and I sometimes have trouble agreeing on who’s who.

For example, not long ago, illustration art collector Nick Daly posted a shot of an original Norm Eastman cover painting he’d recently purchased in the Men’s Adventure Magazines Facebook Group. It was used on the cover of the October 1966 issue of NEW MAN magazine.

When I asked Eva about it, she said she doubted if she was the model for the blonde in the foreground and wasn’t sure if she was the redhead who is wearing the purple dress and matching high heels (a perfect outfit for a stylish damsel being tormented by Nazis). As I ponder it again, I’d say the blonde might be Shere Hite. The redhead still looks like Eva to me. But Eva thought it might be Lisa Karan. Take a look and draw your own conclusions… 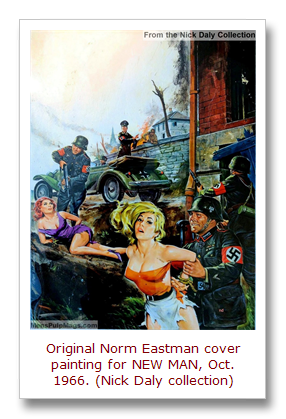 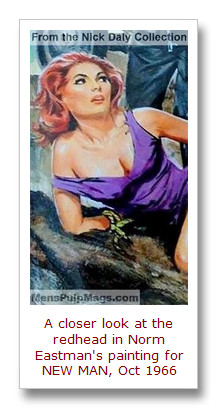 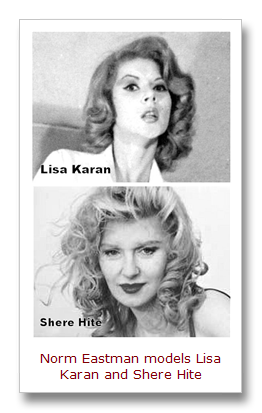 In contrast, it’s relatively easy to make positive IDs of the photos of Eva that appeared in magazines.

One of the magazines I recently added to my collection is the September 1958 issue of the pocket-sized men’s pinup magazine MALE POINT OF VIEW. It features a classic pinup photo of Eva by Herb Flatow on the cover and a two-page spread inside with uncredited photos that may be by him (or maybe by Wil Blanche). 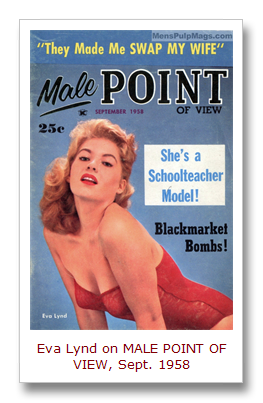 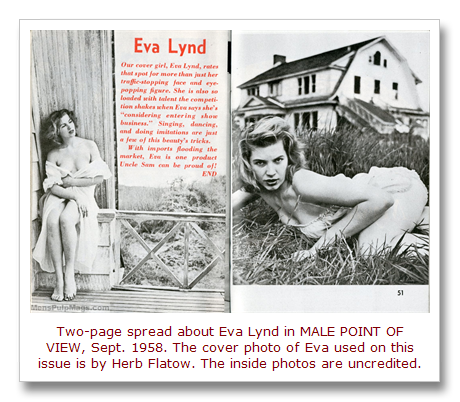 Thanks to a scrapbook she has kept for decades, Eva also has a good handle on the photographs in which she appeared anonymously in scenes shot for the covers and stories of detective, crime and romance magazines, another facet of her busy modeling career in the late 1950s. (Though she doesn’t know the exact dates for all of them.)

As I’ve learned more about Eva, it has been interesting to find out how many different types magazines she appeared in during the ‘50s and ‘60s. 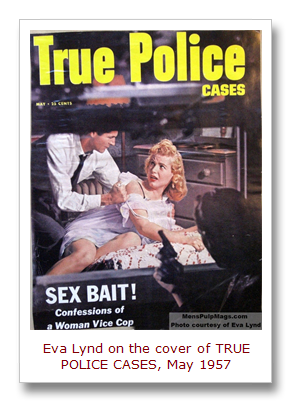 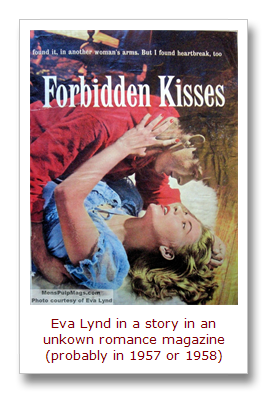 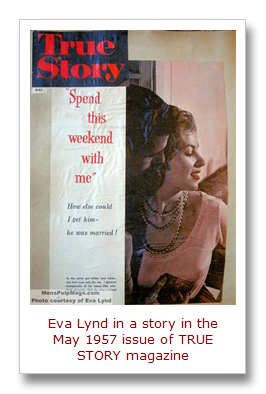 For example, a while ago she sent me a clipping showing a photo of her in the March 10, 1958 issue of LIFE magazine. When I tracked down a copy I found out it was in a fascinating story about the casinos in Havana, Cuba that were being run by American mobsters before Fidel Castro took control of the country.

Eva explained that, for a brief period in 1958 she worked as a casino showgirl there. The photo of her in LIFE shows her in an evening gown playing craps, above a photo of actor George Raft (who worked as a celebrity greeter at one of the casinos). The caption of Eva’s photo says: “Chorus girl Eva Lynd shakes dice at craps table in Riviera Hotel’s mammoth casino.” 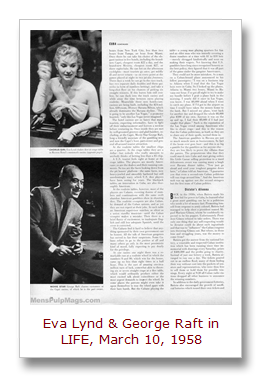 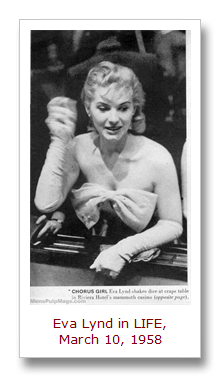 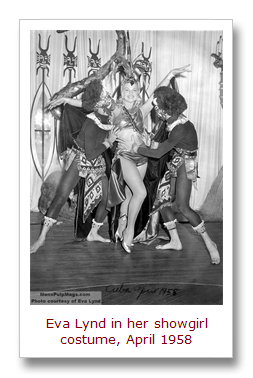 Eva also emailed me some great photos of herself in her showgirl costumes, with the note:

“Here is an episode in my life when I was a showgirl in Cuba in 1958. I was working in the then very new Riviera Hotel next to the Malecon. When there was a storm, the water came in and flooded the lobby. That was a very exciting time and a lot of fun. I was there for two months, after which all Americans were asked to leave. Castro came into power January 1959, and as you know, everything changed then, never to be the same again.”

The longer I know Eva Lynd and the more I learn about her, the more amazed I am at the many facets of her multifaceted career.

Thanks again, Eva, for sharing your mementos and memories with me and the readers of MensPulpMags.com.