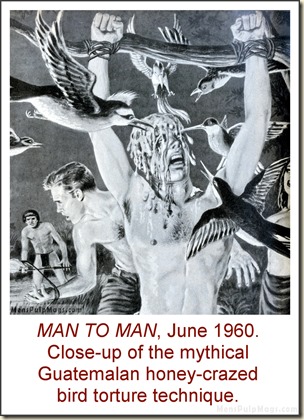 In a previous post here, I showed a set of men’s pulp adventure magazine covers and interior illustrations with scenes depicting the use of various types of animals as instruments of torture.

Just for the record, I’ll reiterate that I am not into bondage and torture of any kind in the real world.

I’m just an aficionado of gonzo men’s pulp yarns and artwork. And many of those involving torture by critter are among the most gonzo.

There are real historical examples of animals being used for torture both by so-called “civilized” people, like the ancient Romans and witch-hunting Christians, and by “primitive” tribes of North America, South America, Africa and elsewhere.

And in fiction, torture-by-critter scenes show up in many novels, movies, TV shows, comic books and other media.

But few real or fictional examples are as wild and crazy as the those dreamed up by the writers and artists who worked for men’s adventure mags.

They took torture-by-critter to another level.

For one thing, men’s adventure magazines seem to have used it as a plot trope more often than other genres.

They also expanded the range of the animals used into more branches of the animal kingdom than any other genre that I know of.

In fact, many of the creatures in MAM stories that involve torture-by-critter scenes are not really maneaters. Sometimes, they are not even meat eaters.

Indeed, it would be nearly or totally impossible to get most of them to do the things shown in many MAM illustrations.

Of course, imagination stretching scenarios are a hallmark of men’s pulp adventure mags.

That’s one of the reasons why you either love them — or not.

Obviously, their torture-by-critter stories and artwork are politically incorrect in multiple ways (as are many other types of stories in vintage men’s adventure magazines). 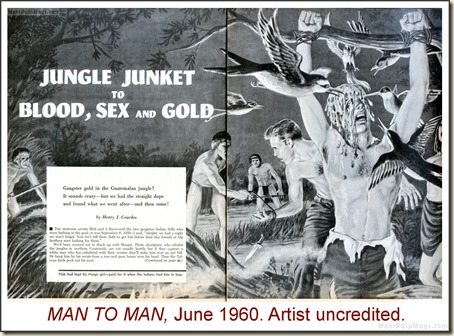 If you’re someone who can’t get over zoological absurdities, outdated racial stereotypes, sexploitation and other unPC or squirm-inducing aspects of those stories, you’ll never understand their appeal.

If you can, you’ll understand why illustrations like the first one shown here, from MAN TO MAN, June 1960, is one of my all time favorites.

It was done by an uncredited artist for the story “JUNGLE JUNKET TO BLOOD, SEX AND GOLD.”

In it, a hapless white treasure hunter is being pecked to death by birds – including a hummingbird.

The birds are supposedly doing so because members of a Guatemalan Indian tribe poured honey over his head, which supposedly drives local jungle birds into a fructose-lusting pecking frenzy.

I guess examples like that might better be called torture-and-execution-by-critter, since the victim is not intended to survive.

Another classic torture/execution-by-bird illustration is the cover of TRUE ADVENTURES, March 1957, done by the great Mort Kunstler. The original painting, featuring vultures and a stray eagle, was sold in 2008 by Heritage Auctions for nearly $10,000.

Torture and death are not the only potential threats posed by animals in MAM artwork when scantily-clad damsels are present.

Some illustrations suggest that the creatures involved may be used for, uh, X-rated purposes. Since men’s adventure magazines were not sexually explicit, that possibility is usually just implied.

For example, check out the cover of EXOTIC ADVENTURES, Vol. 1, No. 2 (1958), shown below. It was done by artist Hugh Hirtle, who appears to have modeled the nearly-nude victim on Bettie Page.

It’s not entirely clear what the native witch doctor wants the huge snake to do with her. And, the cover painting doesn’t actually go with any of the stories inside the magazine. So we’ll never know. But somehow I think that when you’ve got a combo that includes a topless babe with big boobs, a big snake, and a big native guy, Dr. Freud might have some ideas about it.

Hugh Hirtle is far less known than Mort Kunstler, but he was a talented illustration artist who did hundreds of illustrations for men’s adventure magazines. I think the EXOTIC ADVENTURES snake cover is one of his best. 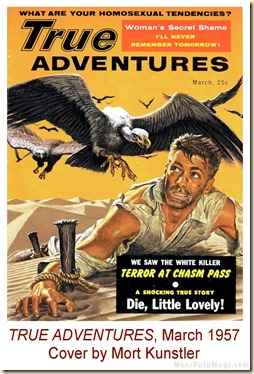 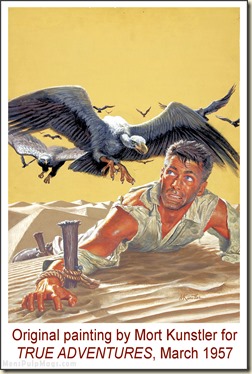 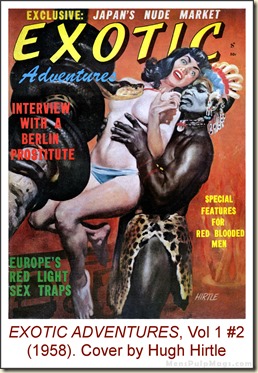 Men’s adventure mags frequently capitalized on and helped stoke ophidiophobia, the fear of snakes. So it’s natural that they were among the go-to creatures for torture/execution-by-critter stories and artwork.

The example on the cover of MAN’S ADVENTURE, March 1958 was done by Clarence Doore, a great and prolific illustration artist who did hundreds of illos for early pulp magazines, men’s pulps and paperbacks. It goes with the the story inside titled “CRAWLING DEATH.”

Doore also did the snake cover painting used for the July 1959 issue of MAN’S ADVENTURE, which goes with the story “BRIDE OF THE ANACONDA.”

The cover artist for ESCAPE TO ADVENTURE, November 1960 is uncredited. I wish I knew the artist because that cover goes with one of my favorite men’s adventure yarns: “ANN DAWES: LOVE QUEEN OF THE PYGMIES.”

That story is over-the-top in multiple ways. It’s racist, misogynistic, offensive to Africans and little people, and it’s spiced with sex, voyeurism, bondage, hallucinogenic drugs and torture using ants and scorpions. (If you dig such things, you can download a PDF copy of it in my Payloadz store. It’s on the bottom “shelf.”) 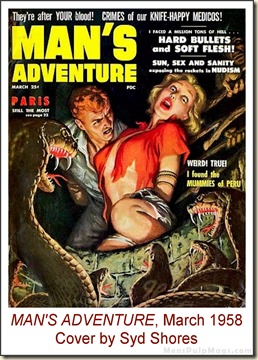 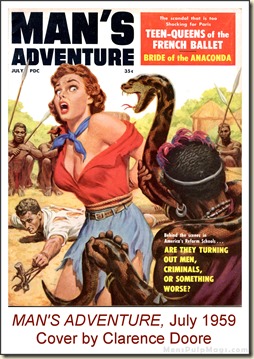 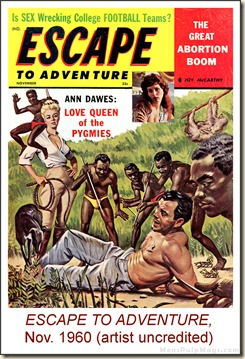 Like the honey-crazed birds, the creature in the next illustration is an unlikely killer in an unlikely scenario.

It’s a giant anteater, also known as an “ant bear,” since it survives by eating ants and other insects. The illustration, by an uncredited artist, goes with the story “THE THING IN THE PIT.” Giant anteaters are big and they do have sharp claws. But they use them to dig into ant hills and termite mounds.

Would an “ant bear” be interested in or effective at killing humans thrown into a pit with them? Well, in the weird world of men’s adventure magazines, they would.

The cover of PERIL, December 1960, also uncredited, depicts another damsel-tormenting snake. It goes with the story “BLOOD LUST OF THE JUNGLE GODDESS.” 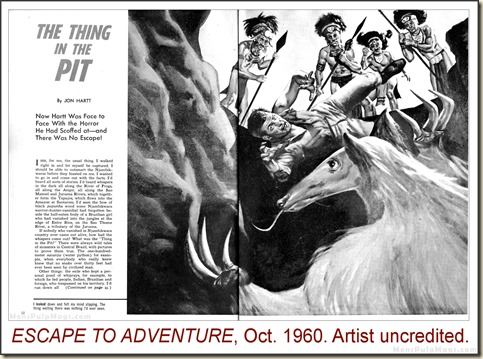 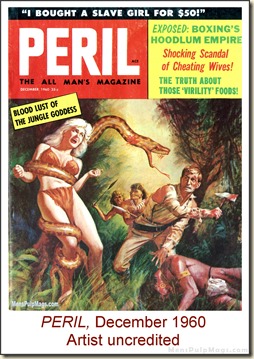 The snake torture painting on the cover of ESCAPE TO ADVENTURE, January 1961 is another classic by Clarence Doore.

I don’t think the snake is a phallic symbol in that one since the story it goes with is “I WAS A CAPTIVE STUD OF THE HUAHAPOS.” If it was supposed to be phallic, it was ahead of its time.

The fan favorite MAM artist Norm Eastman did the snake torture cover for MAN’S ADVENTURE, May 1961. It doesn’t go with any story inside. You’ll have to make up your own.

The torture-by-snake cover for WILDCAT ADVENTURES, August 1961 was done by Basil Gogos another favorite of both men’s adventure and horror magazine fans (including me on both counts). In case you missed it, here’s a link to an interview I did with Basil recently for this blog. 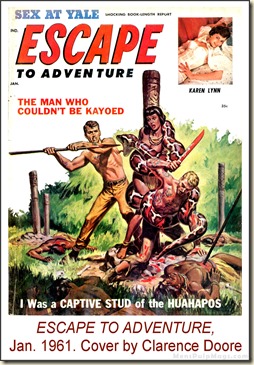 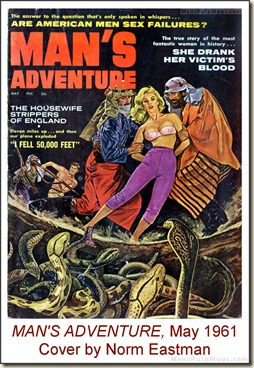 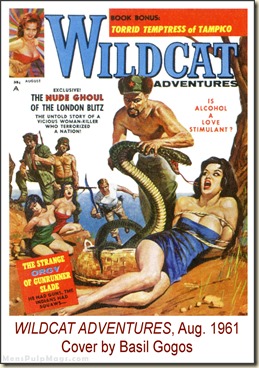 On the cover of WILDCAT ADVENTURES, July 1962, the scary creatures being used to torment a distressed damsel are wild boars. The painting is by another grandmaster in the realm of pulp and paperback illustration, Walter Popp.

The cover of MAN’S EXPLOITS, June 1963 shows two unfortunate ladies being dunked in a tank with a presumably poisonous snake.

The thing is, it’s supposed to go with the story “WE SAVED THE BLONDE BEAUTIES FROM THE PIRANHA HORROR.” As you can see, there are no piranhas in the cover painting.

It’s one of many MAM illustrations which show creatures that are different than the creatures in the story. What’s the reason for those of out-of-sync illos? Here’s my theory…

Many men’s adventure mags were low budget productions. To save costs, the editors often used artwork like stock photos. The artwork they had on hand was often recycled for two, three or even more stories over time.

In a month when money was tight and deadlines loomed, if the editors didn’t have a previously-used illustration showing the critter involved in a story, they used an illo with some other killer critter, to avoid the cost of commissioning a new one. They probably figured — probably correctly — that most readers wouldn’t notice and wouldn’t care if they did notice. 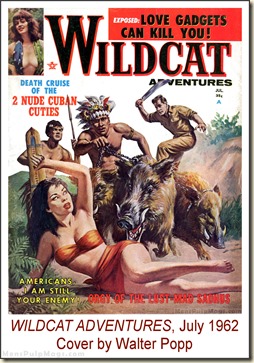 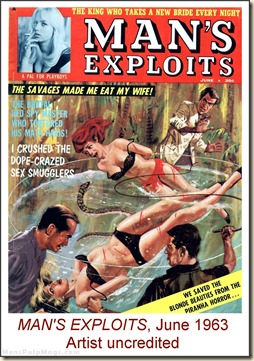 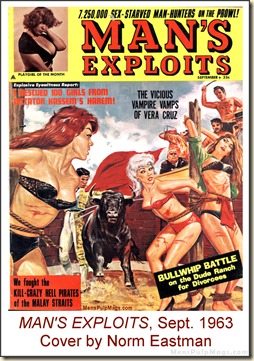 The final cover in this post, MAN’S EXPLOITS, September 1963, shows what looks like Frederick’s of Hollywood models being menaced by a maddened bull, while some pervy bad guys look on. The artist is uncredited, but my friend Rich Oberg IDed it for me as a Norm Eastman cover.

Rich should know. He owns the world’s largest collection of men’s adventure magazine artwork in general and original Eastman paintings in particular. He also owns a lot of wild fumetti artwork.

Coming up: more farfetched torture (and/or execution) by critter artwork.

Art by Earl Norem does double duty, for a “Spider Tribe” and a “Scorpion Cult”…