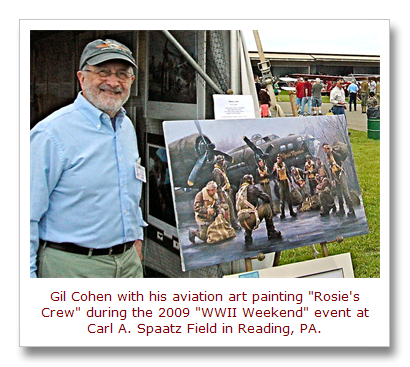 You did a huge number of cover paintings and interior illustrations for men’s adventure magazines from the mid-Fifties to the mid-Seventies, Gil. How did you get started working for them?

COHEN: In 1953, after I graduated from the Philadelphia Museum School of Art [now part of Philadelphia’s University of the Arts], I found out very quickly that Philadelphia was not the place for me to pursue the kind of illustration I was doing. It was a very busy place for publication, but not generally for the kind of work I did. Incidentally, however, one of the first places I took my work to was The Saturday Evening Post.

The Post had its editorial office on Independence Square in Philadelphia.

COHEN: Yes, that’s right. I made an appointment with the art director, and took my portfolio. In those days, artists took examples of their original work, in a case, and showed them to the art directors. It sounds arcane today. I took the elevator to the Sixth Floor, got off, went to the outer office, went to the secretary and told her Gil Cohen has an appointment with the art director, Frank Kilker. And, she said, “Oh, yes. Can you wait a few minutes?” And, I sat down and what am I staring at? Norman Rockwell paintings! Original Norman Rockwell paintings on the wall. Well, if that isn’t intimidating for a 21 year old kid. So, I’m staring at these paintings and there was one in particular that was famous, a big painting of one of his covers that you might recall — the diner, where you have a big heavyset cop sitting next to a kid at the counter. 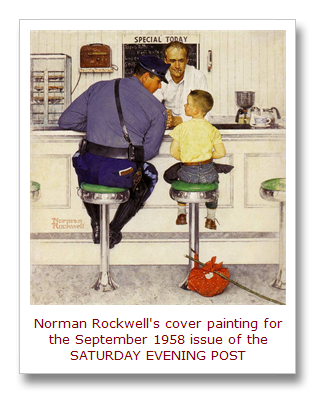 Yes, I know that Rockwell painting. I actually featured it in a previous post on this blog.

COHEN: Well, that’s the one I was looking at and I started thinking, why am I here? Anyway, I showed my work to the art director, he looked at it and he said: “Young man, your work needs polish. Come back in a few years.” So, in the fall of 1953 I went to New York, with my portfolio and stayed at the ‘Y’ with a couple classmates of mine. We were all going around with our portfolios. And, I was striking out, though I got some great advice from a couple of art directors. But I kept striking out and then finally I called on Real magazine and I showed my work to the art director, a youngish guy that I think might have been in his thirties. And, he looked at my work very quickly and he said: “OK look, Gil, we need an illustration for a story about some Indians and mountain men and I might want to give you the assignment. Are you interested?”

COHEN: (Laughs.) Yeah, but I didn’t want to drop on the floor or anything and seem too eager. I kept my dignity and I said: “Yes, I think I might be interested in that.” And, that was my first illustration assignment. A double spread for the February 1954 issue of Real magazine.

You mentioned that illustration in the book Gil Cohen: Aviation Artist, but it’s not shown. I actually have that issue and I love the illo. It’s for a story titled “LAST SPREE OF THE MOUNTAIN MEN” by Joseph Millard. He wrote a lot of magazine stories and novels in the Fifties, Sixties and Seventies, including quite a few westerns, like the “Man With No Name” series of novels based on Clint Eastwood’s spaghetti Western movies. 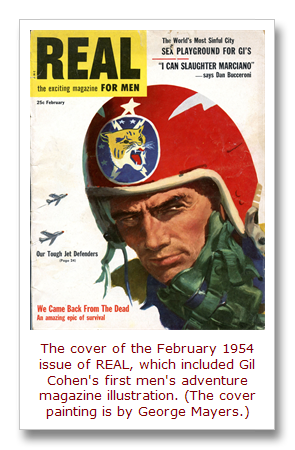 COHEN: I’ll tell you something else about that illustration that’s not in my book. When I started working on it, I went to my good friend Isa Barnett, the great illustrator. Isa was in his early thirties then and was already a well-known illustrator. And, he was a stickler for authenticity, particularly Native American authenticity. I explained to him that the story I was illustrating for Real was about these Nez Perce Indians who are riding horses through a frontier town, and on some of the horses are their squaws, who they were selling out as prostitutes to the drunken white frontier guys. That’s what they wanted me to illustrate. I only had two weeks to do this, and it dawned on me that this is not an easy painting to do, with a lot of people. And, here I am, it’s my first assignment for a spread in a national magazine. Well, I did the rough initial sketch, following Isa’s suggestions. And, in it I gave the Indian women some dignity because I felt native Americans should be shown that way, with dignity, sitting upright on their horses. Then I sent the sketch to the art director. Today, you just email a sketch. Back then, I had to get a photostat made, which if you were lucky could be done in a few hours, then you had to take the photostat, put it in an envelope and send it special delivery and hope it’d arrive in New York City the next day.

You had gone back to Philly at that point?

COHEN: Yes, living with my parents. I’m there waiting on pins and needles for a response from the art director on the rough sketch. And, he calls me back and he says: “Look Gil, you don’t have it here.” He said emphatically: “We wanna see tits and ass.” I said “What?” He said: “Look, we wanna see a lotta sex here. You don’t have any here.” I started naively talking about the dignity of this tribe. He said: “I don’t wanna hear any of that shit. What we need here are tits and ass! So, when you do the finish, how about having her really leaning over, the girl in the foreground on the horse. She’s leaning over and teasing one of the frontier guys, maybe rubbing his hair or something like that, so you see cleavage.”

COHEN: Yeah, but it scared the hell out of me at the time. In those days, I couldn’t paint a beautiful, sexy woman to save my life. I really couldn’t. And, to make matters worse, I had just received a letter from Uncle Sam, saying I’m about to be inducted into the United States Army. I had been deferred for four years of art school, but now they were ready to take me. I was to report for duty the on day that was the deadline for delivering the Nez Perce painting to Real. Well, I knew I couldn’t go deliver it that day, I had to go deliver it the day before. So, I did the illustration. I took the train to New York. I went to the Real magazine offices and showed the art director the painting. I had knots in my stomach. And, the art director looked at it, and he looked it up and down very quickly, and he said. “Can you change this, change that, put a little more cleavage here?” Now, luckily, on the advice of my friend Isa, I took my art supplies with me, because there was no way I could take it home and do it and then send it back I time. So I said: “If you don’t mind, I’ll do it right here.” And he said “Sure whatever you want.” 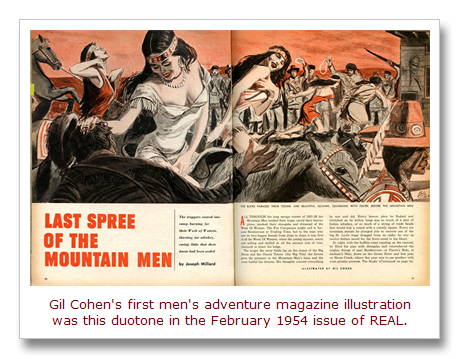 You finished it on the spot?

COHEN: I did, though it took a while. By late afternoon, it’s past five, everybody has left, now I’m in an office building with cleaning people. It was a very lonely feeling. And, I’m doing these corrections and doing the best I can and then I looked at my watch and said, “I’m gonna make that 8 o’clock train back to Philly. Whatever I do, I’m gonna do that, ‘cause I have to get up really early in the morning to say goodbye to my parents and all that. And, I did. I think it was about 7:30 or something like that. I put the illustration down, grabbed my art supplies, took the elevator down, hailed a cab — it was dark — and took the cab to Penn Station and barely got on the train on time, and got home. Next day, I was inducted into the Army. This would have been November sixteenth, 1953.

Did you get to see the illustration in print before you left?

COHEN: Well, let me tell you what happened. I’m in basic training at Camp Pickett, Virgina. Maybe six or eight weeks into basic. And, I’m on a bus that goes around the base with my platoon. I think we we’re headed to some medical facility for shots. And, I’m sitting on the bus, with a bunch of the guys, and one of them yells: “GIL COHEN!” I wonder what in the hell’s going on. Well, he’s got the Real magazine. He runs back to my seat and says: “Hey, Cohen, did you do dis picture?” I said, “Uh, yeah.” I didn’t know what he’d say next, but I expected the worst. I felt as if I were being seen naked by the world. And, he looks up and says: “Wow! Hey, guys! Hey, Cohen did dis picture. Hey, you’re great, Cohen!” I still have a tearsheet of that issue. It’s a duotone. Orange and black.

To my knowledge, that first men’s adventure mag illustration by Gil Cohen has not been reproduced anywhere else before, in print or on online. So, unless you’ve read the February 1954 issue of Real magazine, you saw it here first.

Below are some other things you’ll probably be seeing here first: two more of the lush, original duotone paintings Gil Cohen did for men’s adventure magazines. These are now part of the Rich Oberg Collection and shown here courtesy of Rich Oberg. 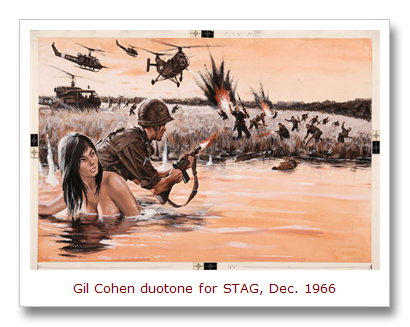 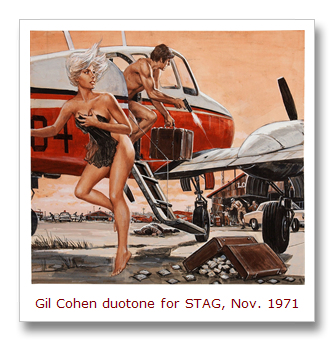 Here’s a link to the third and final part of my interview with Gil Cohen. If you missed Part 1, click this link.