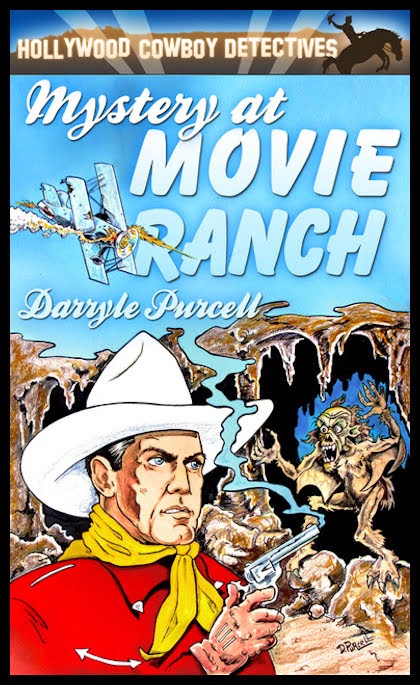 I’m a big admirer of Ron. So, I added one of the HCD books he reviewed, MYSTERY OF THE AMERICAN YETI, to my reading list.

By coincidence, not long after that, I got an email from Darryle. He’d been exploring my posts on this blog and noticed that the “About” page explains how my love of men’s adventure magazines came, in part, by way of my love for the 1970 LP WEASELS RIPPED MY FLESH by Frank Zappa and the Mothers of Invention.

Frank borrowed that album name from the title of the cover story of the September 1956 issue of MAN’S LIFE. But instead of using the classic man vs. weasels cover painting artist Wil Hulsey did for MAN’S LIFE, Zappa asked his friend, artist Neon Park, to create the album’s cover art. That cover, showing a man shaving with a weasel-shaped razor, became iconic in itself. (My publishing partner Wyatt Doyle and I borrowed the MAN’S LIFE story title and Hulsey’s cover art for our first anthology of men’s adventure magazine stories, and included the killer weasels story in it.)

In his initial email to me, Darryle said: “I worked with Neon Park, whose real name was Marty Muller, at Filmation Associates animation studio in Reseda, California. Marty was a very unique, fun individual and a master of cartooning and fine art. All of his album covers, billboards, posters and full-color illustrations were brilliant examples of his one-of-a-kind sense of humor.”

Reading that made me even more interested in getting to know more about Darryle, his career and the books he writes and illustrates. Here’s an overview of what I learned by doing some Googling and exchanging emails with him.

Darryle Purcell grew up on a small ranch in northern California. As a kid and teen, he loved pulp magazine characters like Doc Savage and “B-Western” films starring cowboy stars like Hoot Gibson, Ken Maynard and Hopalong Cassidy.

In 1965, Darryle joined the Army and served as an infantry paratrooper in Vietnam. At the end of his term of service, he went to college as an art-illustration major. During that time, he began doing political cartoons for the college paper and made a few animated films. That led to a job at Filmation working on Saturday morning cartoons, then to work as an illustrator of comic books, young-reader books for educational publishing firms and drawing editorial cartoons and motorcycle and rock ’n ’roll illustrations for weeklies around Los Angeles. 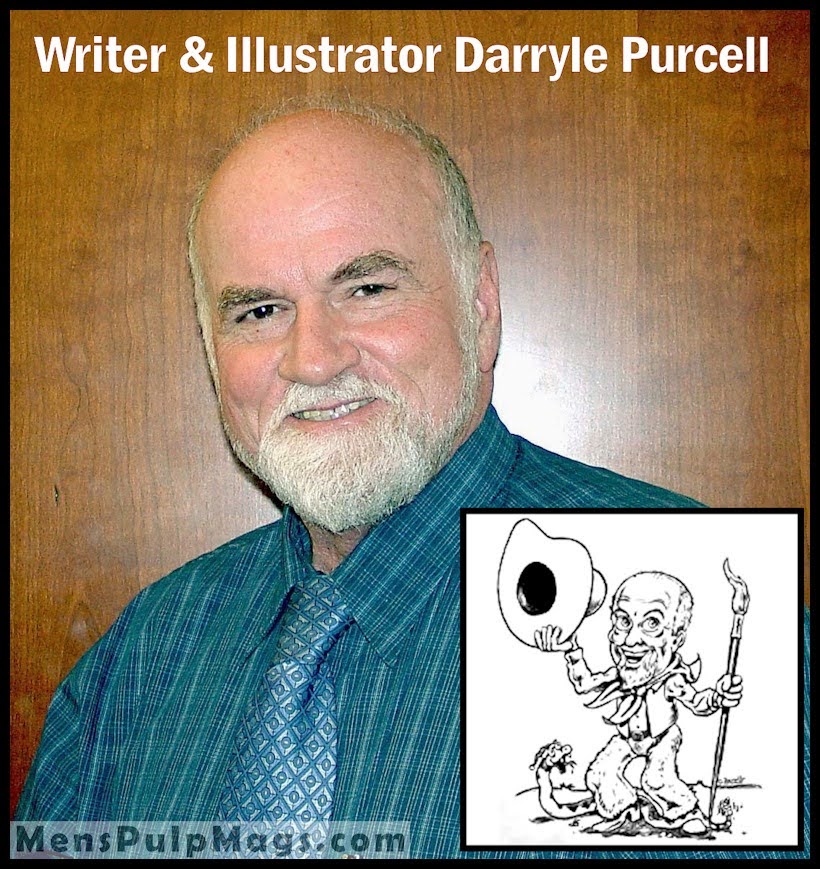 In the 1980s, Darryle began working for daily newspapers as an editorial artist, cartoonist and designer. Eventually, he became assistant managing editor at a southern California publication. In 1993, he moved to Arizona, where he worked as managing editor of the Mohave Valley Daily News and as public information director for Mohave County.

In 2013, Darryle “retired” – sort of. He really just started a new phase of his career by writing and illustrating novels. Since then, he has written 10 novels in his “Hollywood Cowboy Detectives” series and three in his “Man of the Mist” series, as well as many short stories featuring those characters.

“My first Hollywood Cowboy Detectives novel, MYSTERY AT MOVIE RANCH, was released in 2014. It’s comprised of 12 cliffhanger chapters set in the San Fernando Valley area of southern California during the filming of the 1934 Mascot Pictures serial, MYSTERY MOUNTAIN, starring Ken Maynard. Sean “Curly” Woods, former Los Angeles Examiner crime beat reporter and current studio flack, is my main fictional character who appears in all HCD publications. In MOVIE RANCH, Woods is joined by Maynard and Western movie star and World Champion Rodeo Cowboy Hoot Gibson. They engage in a series of deadly encounters with an army of anti-American terrorists ruled by a sinister mastermind known only as the Viper.”

That first HCD novel set the template for those that followed. I’d say that they are, in a sense, “New Pulp” novels. But instead of featuring new takes on classic pulp magazine heroes, they are fictional adventures featuring real actors who starred in Western movies in the ‘30s and ‘40s and other historical figures from that era. In each HCD novel, the “Hollywood Cowboy Detectives” and their friends are pitted against various villains and monsters.

Darryle is a fan of hard-core action/adventure novels like Don Pendleton’s Mack Bolan/Executioner series and his novels do include some violence. But they are a milder type of entertainment, more akin to old pulp mags and the Captain Hazzard “New Pulp” novels written by Ron Fortier. Like me, Darryle is a fan of all of those genres. (By the way, the original cover paintings artist Gil Cohen did for the Mack Bolan novels are showcased in our new book ONE MAN ARMY: THE ACTION PAPERBACK ART OF GIL COHEN.)

“After returning from Vietnam, I found Don Pendleton’s Executioner series to be amazingly therapeutic,” Darryle told me. “Action-oriented, escapist literature brings us solace in that the good guys usually win, even if Mack Bolan has to kill a couple of hundred bad guys before we close the book. But I believe humor has a place in keeping heroes humble. Therefore, the characters that reside within the Hollywood Cowboy Detectives and Man of the Mist books are saddled with very human, feet of clay. My target audience is a bit like me — a mixed bag. War veterans. People who remember and/or appreciate Saturday matinees adventures. I do filter in a lot of humor in my adventures. As I learned back in Vietnam, if you can’t laugh at some crazy shit, life will eat you up. My HCD protagonists are Code-of-the-West action guys who end up dispensing hard justice to the bad guys. I would like young readers to enjoy my books. But my guess is that many of the folks who read the Hollywood Cowboy Detectives are older guys who have an interest in the history and culture of the 30s and 40s.” 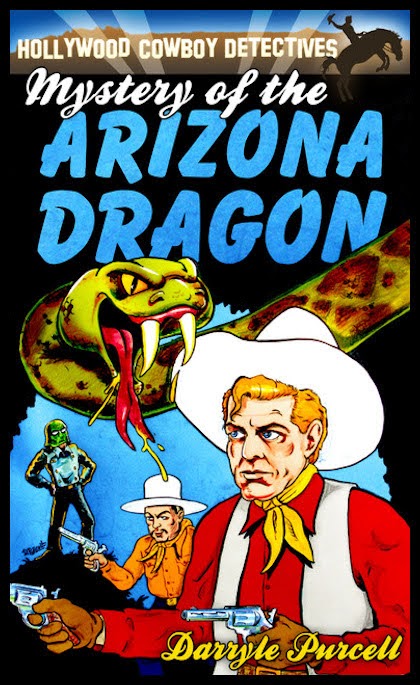 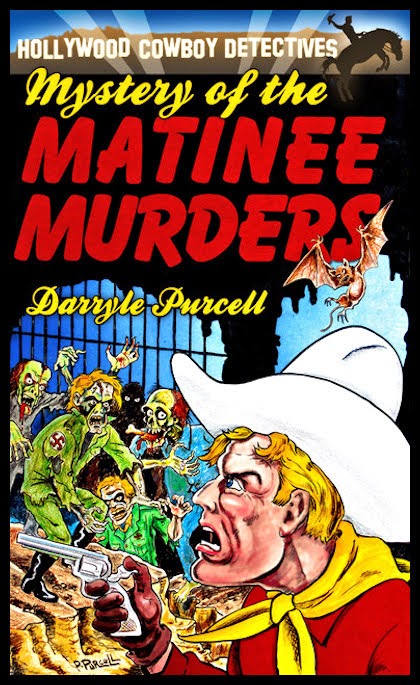 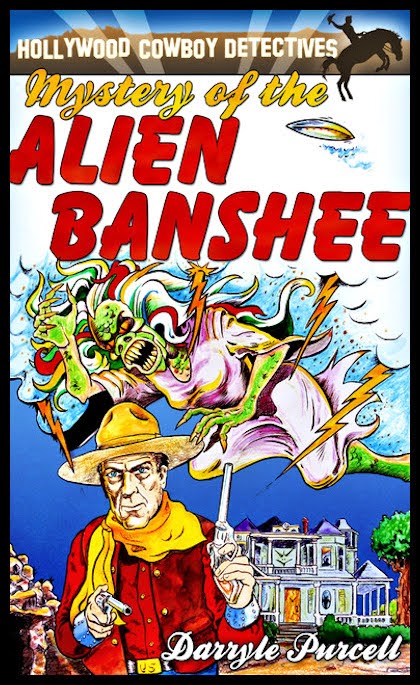 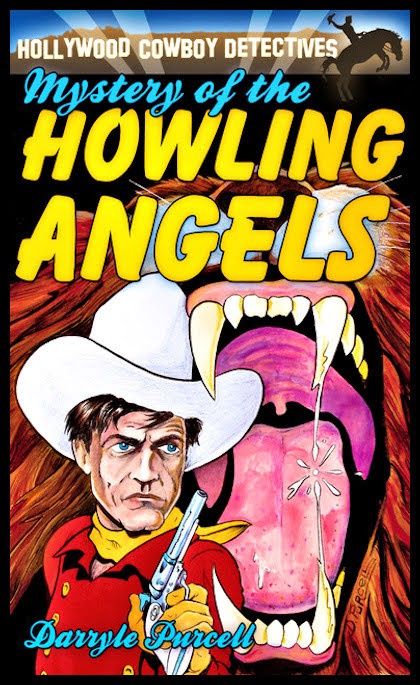 In Darryle’s second HCD novel, MYSTERY OF THE ARIZONA DRAGON, Curly Woods is sent to a dude ranch to investigate threats to the cast and crew of a Charlie Chan movie being filmed there. Hoot Gibson, Chan stars Warner Oland and Keye Luke join him as he attempts to track down the bad guys behind of a variety of deadly incidents.

In MYSTERY OF THE MATINEE MURDERS, the third HCD novel, Woods, Gibson and Ray “Crash” Corrigan are joined by Orson Welles and a radio-theater group on a studio-funded road trip to entertain children in hospitals and at Saturday matinee presentations. A mysterious assassin hounds the entertainers, leaving a trail of victims killed with cobra venom.

The fourth novel with Curly and the gang, MYSTERY OF THE ALIEN BANSHEE, brings early Western film star William S. Hart into a sci-fi western adventure.

Another classic Westerns actor, Tom Mix, joins Gibson and Woods in MYSTERY OF THE HOWLING ANGELS, the fifth HCD novel. With bounties on their heads, the Hollywood Cowboy Detectives are one step in front of murderous agents of the Congressional Shadow Caucus, an organization of federally elected officials who support an alliance with Nazi Germany. 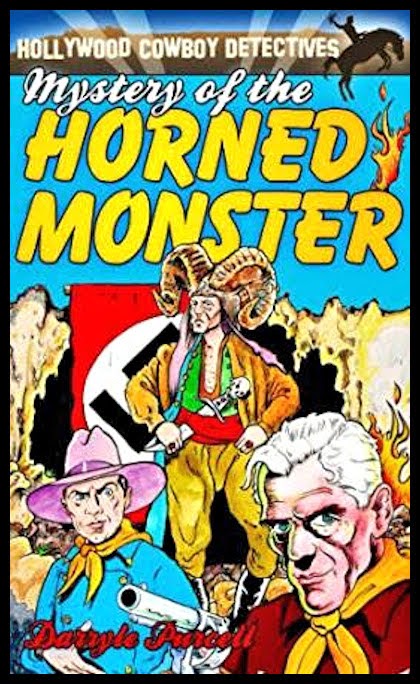 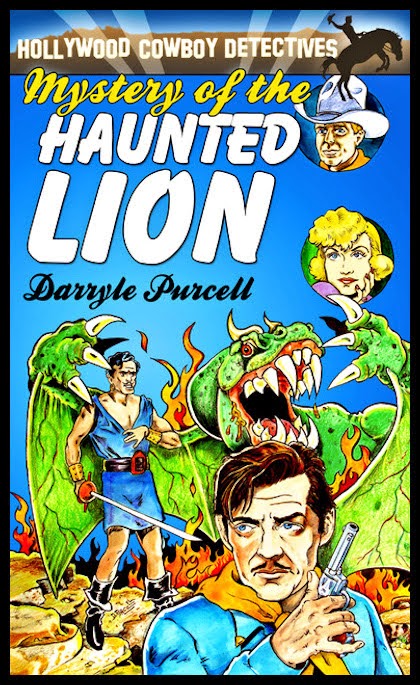 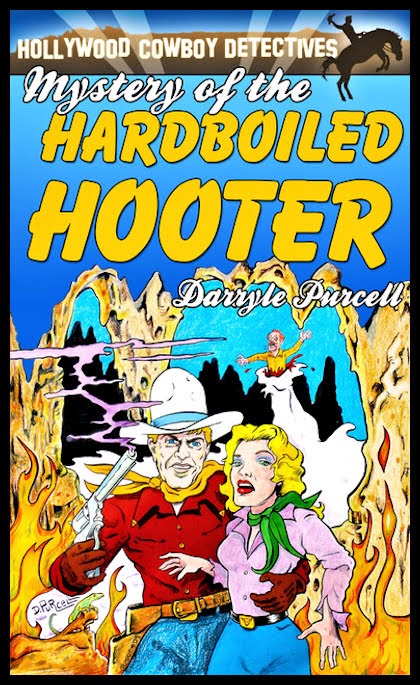 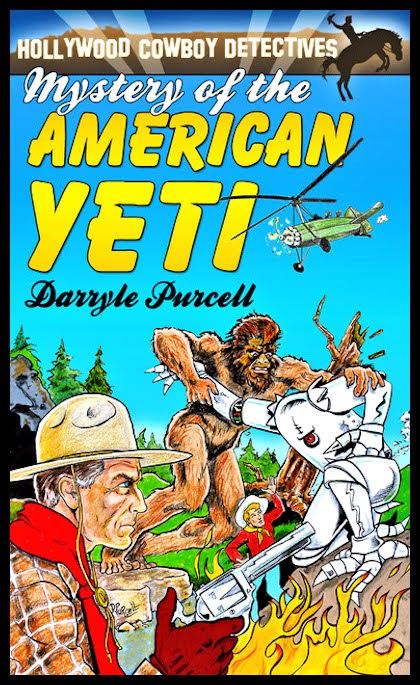 The sixth HCD novel, MYSTERY OF THE HORNED MONSTER, Curly and Hoot try to find out who is torching sets at Monogram Studios. The sabotage increases as the Hollywood Cowboy Detectives discover that someone may be trying to kill famous monster movie stars Boris Karloff and Bela Lugosi. They fight their way through flying torpedoes, suicide bombers, students controlled by mind-altering drugs, brown-suited seemingly mute thugs, and weapons that fire liquid electricity only to be trapped and outnumbered in the underground lair of the Horned Monster.

In MYSTERY OF THE HAUNTED LION (the 7th HCD novel) the famous film stars Clark Gable and his wife Carole Lombard join the HCD team in a battle against a supernatural power that may unleash a Hell on Earth.

MYSTERY OF THE HARDBOILED HOOTER (novel 8), sends Hoot, Curly and a posse of adventurous friends on a trail of vengeance, to track and kill the murderers of Tom Mix.

I’m a fan of cryptozoological monster lore — as shown by our collection of men’s adventure magazine stories about Bigfoot and other legendary creatures, the CRYPTOZOOLOGY ANTHOLOGY. So I particularly enjoyed the ninth HCD novel, MYSTERY OF THE AMERICAN YETI. In that one, Darryle cooks up a plot in which Curly, William S. Hart and Hoot Gibson make friends with a Sasquatch family and join with them to fight Nazis, Communists, evil scientists, and giant metal creatures. It is, pun intended, a real hoot. 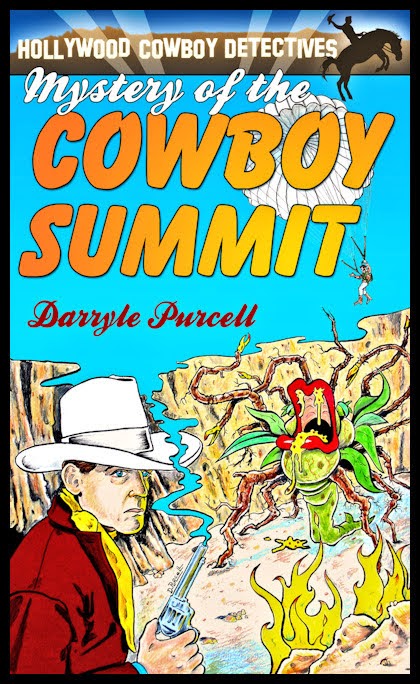 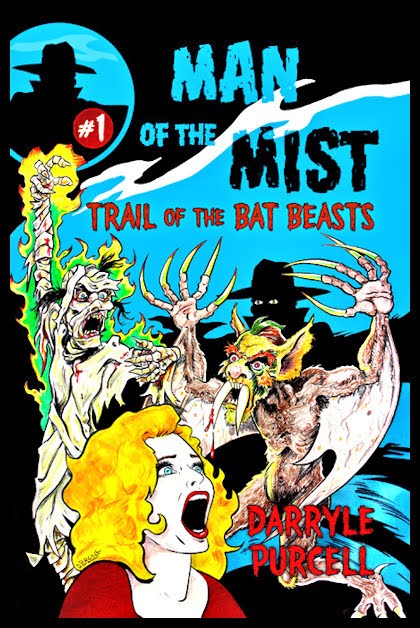 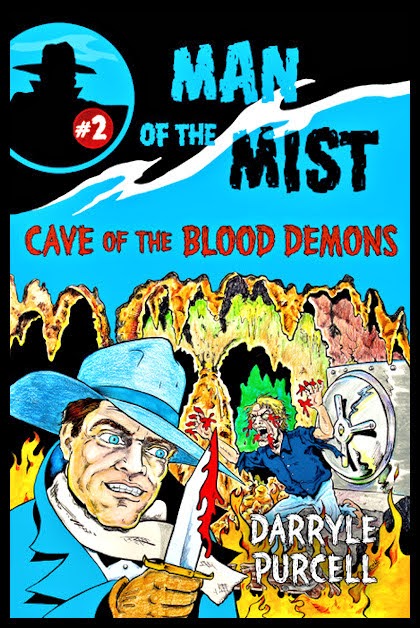 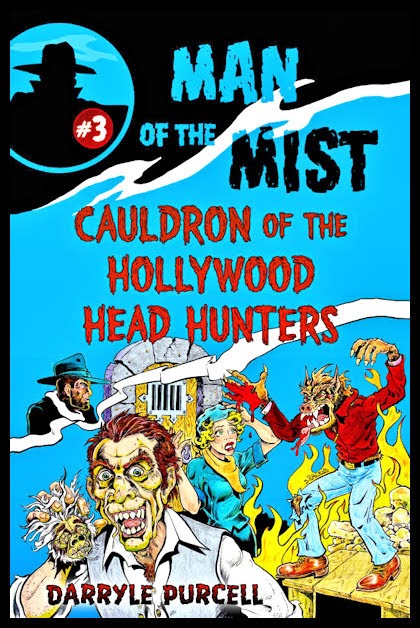 The 10th and latest full-length novel the HCD series is MYSTERY OF THE COWBOY SUMMIT. In it, the Hollywood Cowboy Detectives fight for their lives against piranhas, crocodiles, poison dart carrying indigenous natives, political terrorists, and an infestation of gigantic ungodly monsters that prey on horses, cattle and humans.

Those thumbnail descriptions should give you a sense of how wildly imaginative the HCD series is.

Darryle’s “Man of the Mist” novels — TRAIL OF THE BAT BEASTS, CAVE OF THE BLOOD DEMONS and CAULDRON OF THE HOLLYWOOD HEAD HUNTERS — are equally wild, adventure yarns. They feature a pulp-style hero named Ralph Thorn, a master of mind control, and his beautiful blonde assistant Moxie Malone. Darryle has also written short stories based on the characters in the Hollywood Cowboy Detectives and Man of the Mist series. Some are included in his novels, some are standalone Kindle offerings.

Darryle’s novels and stories are, obviously and intentionally, escapist literature. I like such escapist stuff. And, I like his quirky, cartoony cover art and interior illustrations. In the case of Darryle’s HCD series, I’m also impressed by the fact that he did a lot of homework about real Hollywood movies and stars and real historical events in writing them.

“All of the Hollywood Cowboy Detectives adventures take place, so far, between 1934 and 1941, and deal with real issues, international situations, politics, crime and quite a few famous and infamous people from that era,” he explained. “I do a lot of research on what was being filmed, where, and by which studio within a specific time frame. I then carve a window in the time period where certain people could have gathered together to deal with an adventure. The most fun I have is during the preparation for these books when I am reading up on the wonderful people who worked so hard on the B-Western films and serials. The early movie cowboys were all real rodeo champs and the stunts were all performed exactly as they are seen on film. Also during those years, governing agencies around the world were experimenting with unique weaponry, some of which I’ve used in these adventures. The sci-fi and supernatural elements are based on traditional beliefs and are a big part of the cliffhanger storylines.”

If you enjoy pulpy entertainment, check out Darryle Purcell’s novels. At a time when many of us need a mental vacation from pandemic news and blues, they’re your tickets out.

What I’ve been reading in the Western, pulp and action/adventure genres — and beyond…