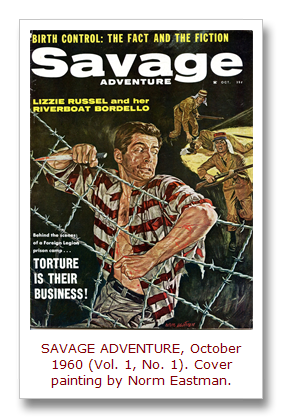 Not long after I wrote the New Year’s post about duplicate uses of the same illustration in different issues of men’s adventure magazines, I ran across an example that involves a rare signed illustration by artist Norm Eastman.

Most of the classic cover paintings Eastman did for those magazines were uncredited and unsigned, though they are generally recognizable as his.

Recently, I bought a hard-to-find copy of the premiere issue Savage Adventure magazine, published in October 1960.

I didn’t notice until after it arrived that the cool prison escape painting on the cover was signed at the bottom right by Norm Eastman.

Savage Adventure was a short-lived men’s adventure mag published bi-monthly from October 1960 to May 1961 by Matclif Publications, Inc., which had editorial offices at 11 East 17th St. in New York City.

Naturally, both magazines also used many of the same artists and writers. In fact, Norm Eastman’s cover painting for the October 1960 of Savage Adventure was reused as an interior illustration in the March 1961 issue of Big Adventure (which features a male POW bondage and torture cover painting by another great illustration artist, Mel Crair). 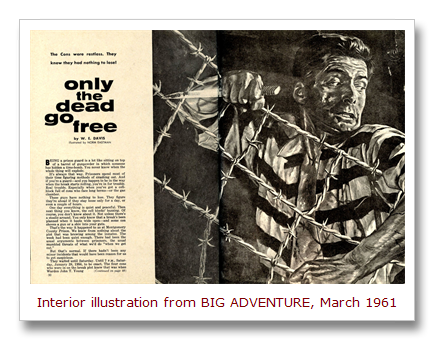 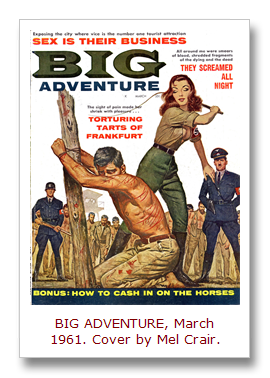 Speaking of duplicate uses, the title of Savage Adventure wasn’t exactly unique itself.

In 1959, Cape Magazine Management Corp. published a men’s pulp mag called Savage, for short. The full name with the subtitle was Savage Adventures for Men.

To my knowledge, only a few issues of Savage were published, between March and September of 1959. 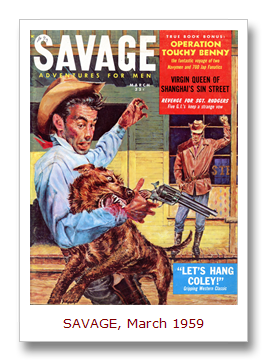 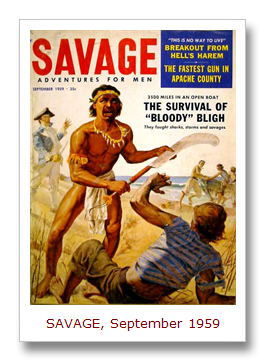 Issues of Savage, Savage Adventure and Big Adventure are all relatively scarce and worth snagging if you’re a collector.

I’ll give you a look inside some issues of each of them in upcoming posts. In the meantime, for $2.99 you can buy and download a complete, digitized copy of the September 1960 issue of Big Adventure by clicking this link.

It’s a nice, hi-rez, searchable PDF file. And, it costs a lot less than you’ll pay for the real thing (if you can find it).