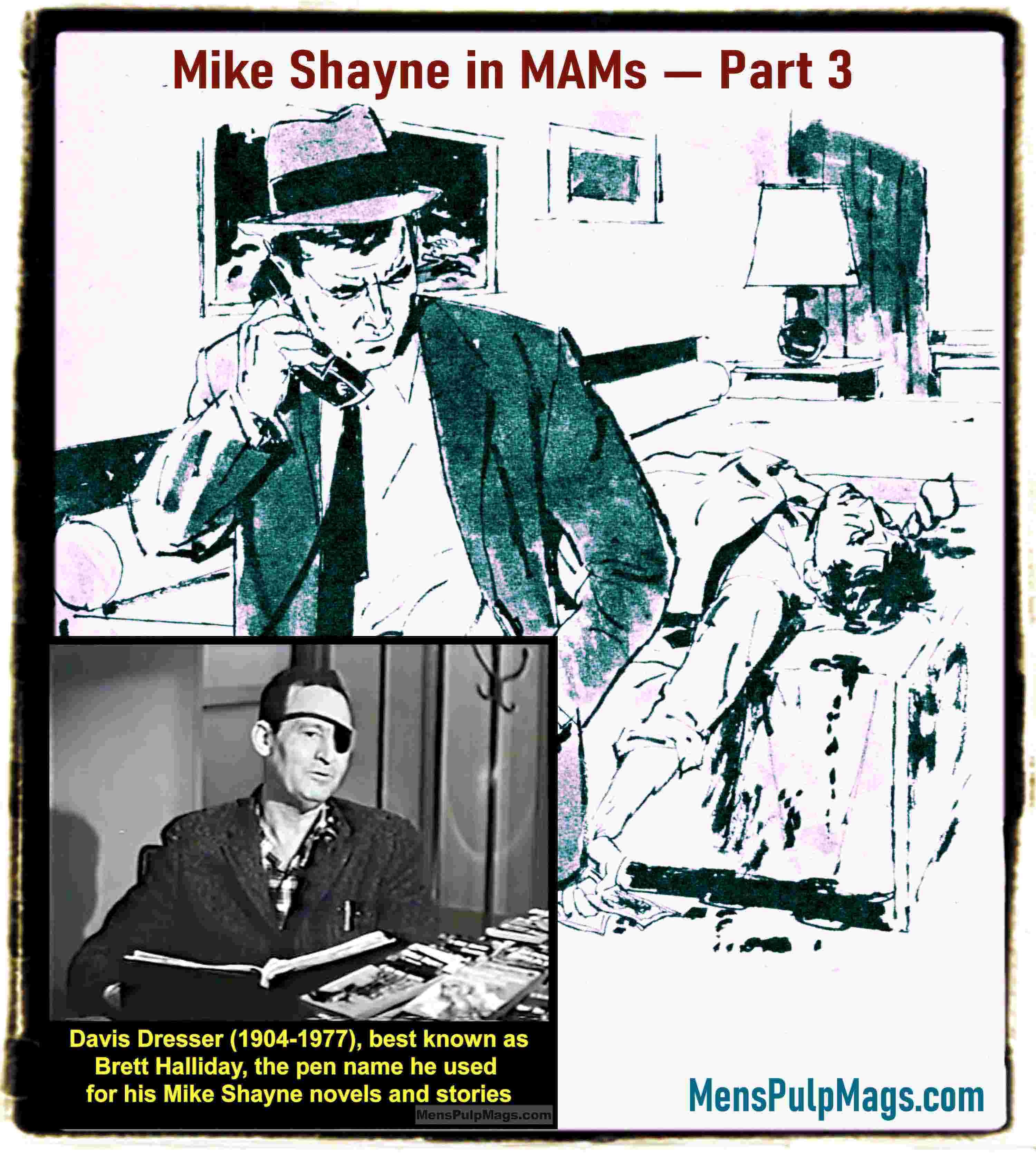 It’s been a while since I posted on this blog, but I haven’t been slacking.

During the past two months I’ve been working on several different book projects.

I worked with my partner in the Men’s Adventure Library books series, Wyatt Doyle, to finalize and publish the paperback edition of our book MORT KÜNSTLER: THE GODFATHER OF PULP FICTION ILLUSTRATORS, which showcases Mort’s original men’s adventure magazine cover and interior artwork.

The paperback and deluxe hardcover editions of our MORT KÜNSTLER art book are both now available from Amazon worldwide, as well as from other major online booksellers. You can also buy a copy signed by Mort himself via his website at this link.

Wyatt and I have also been putting the finishing touches on an illustrated anthology of men’s adventure mag stories written by Robert Silverberg.

Titled the EXOTIC ADVENTURES OF ROBERT SILVERBERG, it should be available in January.

We will also soon release our third art book featuring MAM artwork by Samson Pollen. (The first two are POLLEN’S WOMEN: THE ART OF SAMSON POLLEN and POLLEN’S ACTION.)

Meanwhile, I’ve been cooking up a whole new series featuring MAM stories and artwork with Bill Cunningham, the founder of Pulp 2.0 Press.

In January, Bill and I will be releasing the first issue of a large-format, magazine-style publication we’re calling the MEN’S ADVENTURE QUARTERLY.

In my previous three posts on this blog, I covered the earliest appearances of stories about Private Detective Michael “Mike” Shayne in men’s adventure magazines published between 1953 and 1961 and Dell’s Mike Shayne comic book series (which was recently reprinted by Pulp 2.0 Press).

This post reviews Mike Shayne stories published in MAMs from 1962.

Most were written by Davis Dresser, the creator of the Mike Shayne novels and MIKE SHAYNE MYSTERY MAGAZINE, under his Brett Halliday pseudonym. Some were penned by other writers after Dresser turned Brett Halliday into a house name for Shayne stories.

As noted in my initial Shayne post, Dresser’s first Mike Shayne novel, DIVIDEND ON DEATH, was originally published in 1939, and the first Mike Shayne story to appear in a men’s adventure magazine was “The Naked Frame” in BLUEBOOK, February 1953. 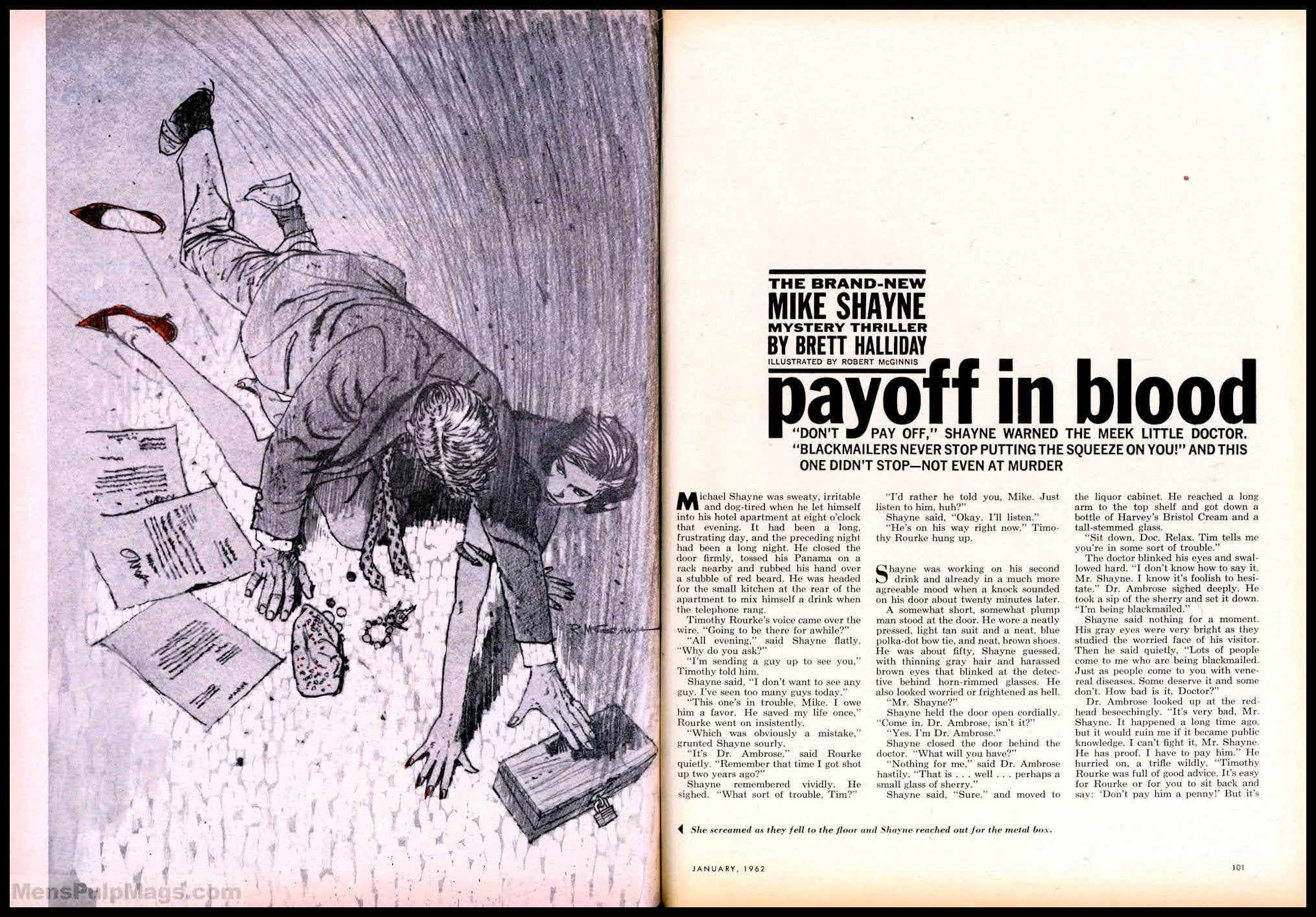 My second post about Mike Shayne in MAMs covered “Payoff Girl” in STAG, December 1956, “Murder in Haste” in ARGOSY, March 1961 and “The Careless Corpse” in ARGOSY, August 1961.

“Payoff in Blood” appeared in ARGOSY, January 1962. It’s illustrated with artwork by the great Robert McGinnis.

His cover paintings, typically featuring bold colors and tall, eye-poppingly gorgeous women, have become some of  the most iconic images associated with paperback editions of detective, crime, mystery and action novels published in the ‘60s and ‘70s. Among them are the covers for the classic Dell reprints of the Mike Shayne books in the ‘60s.

Robert A. Maguire is another top paperback cover artist whose work was used for Mike Shayne stories in MAMs. His popular paperback cover art is showcased in the book DAMES, DOLLS, AND GUN MOLLS: THE ART OF ROBERT A. MAGUIRE, edited by Jim Silke.

McGinnis and Maguire did more than 2,000 covers for paperbacks published by virtually every major publisher. Their artwork also appeared in top tier MAMs, like ARGOSY and MAN’S MAGAZINE. Sometimes their MAM art was done specifically for the magazine. Often, their paperback cover art was repurposed by MAMs published by Pyramid.

The Art Directors for those MAMs regularly got double duty out of Pyramid paperback cover paintings by reusing them as cover and interior illustrations for the magazines.

The Mike Shayne story in MAN’S MAGAZINE, January 1962, titled “The Deadly Stripper,” is a case in point.

The left-hand page in the initial two-page spread for that story is a black-and-white reprint of Maguire’s cover painting for the 1959 Pyramid paperback FIRE IN MY BLOOD, the autobiography of a famous femme fatale who went by the name Denisa, Lady Newborough. 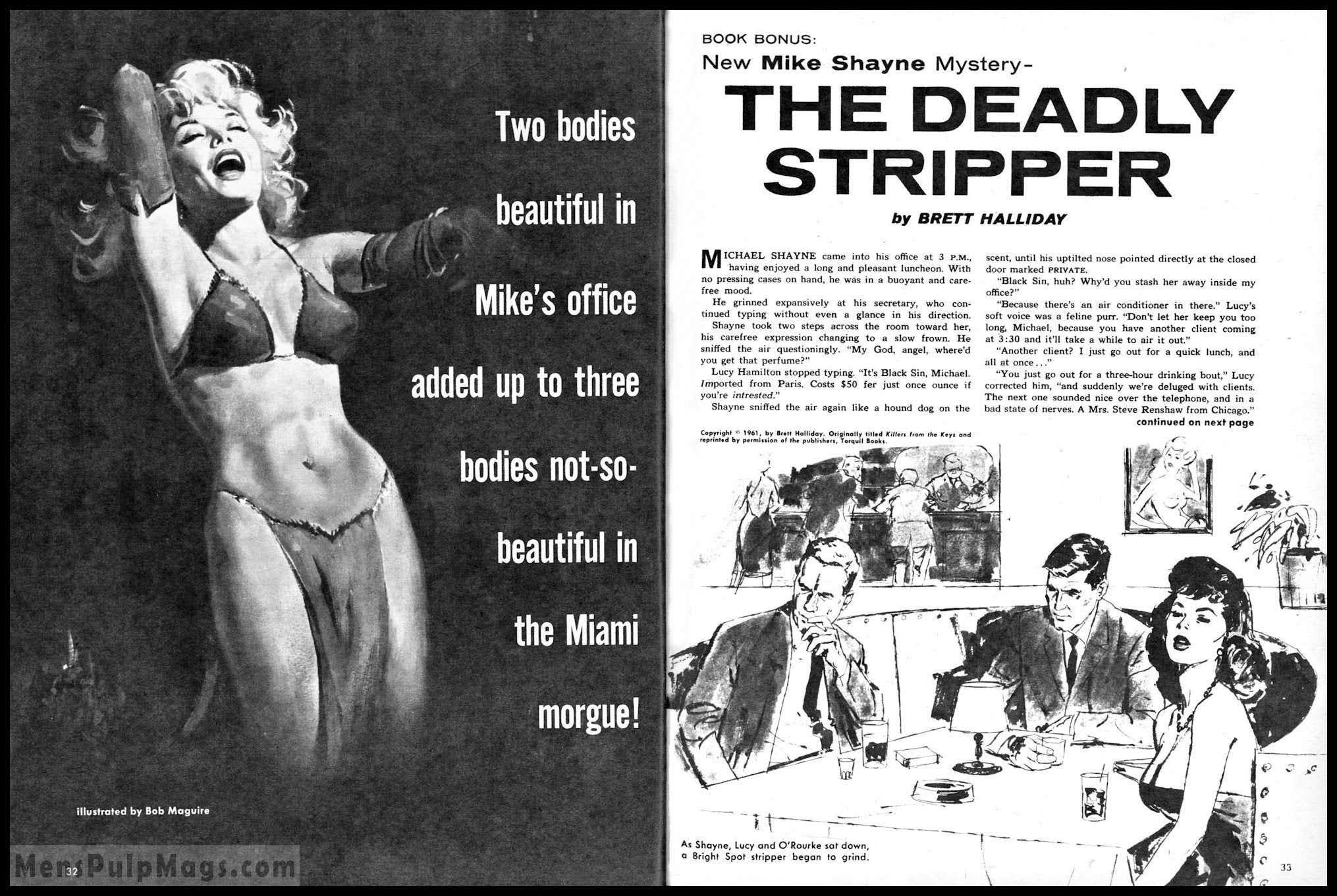 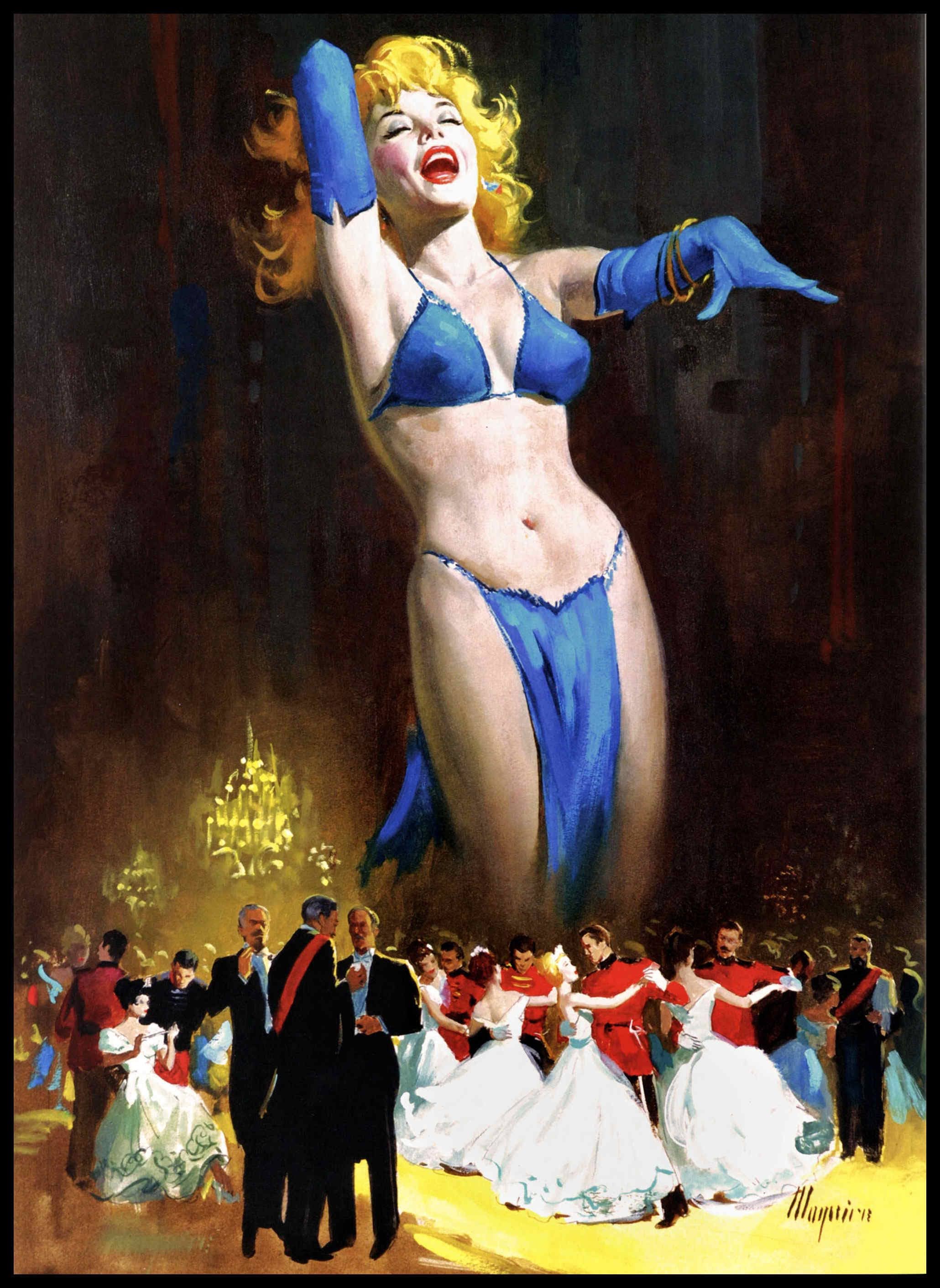 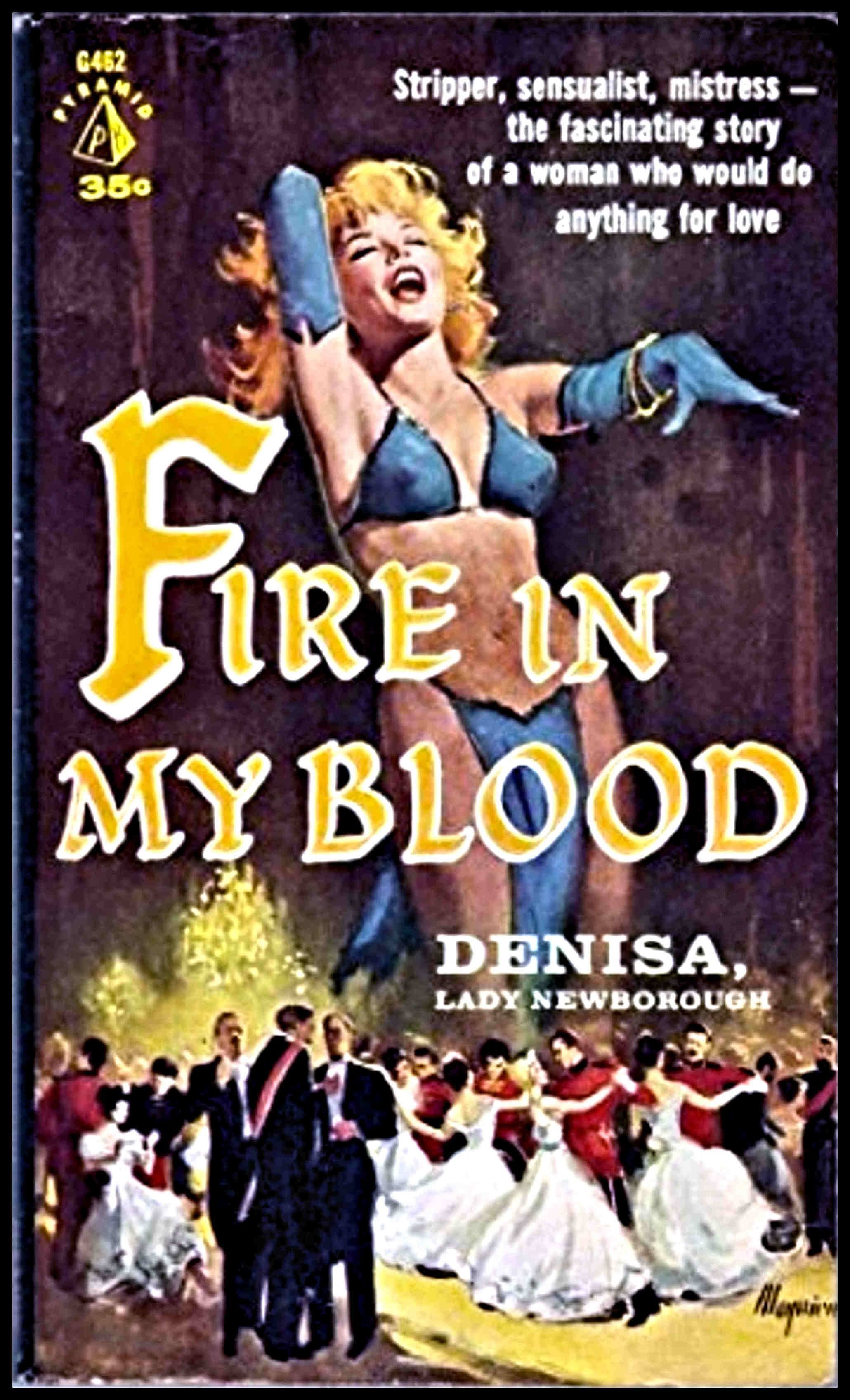 Born Denisa Braun in Romania in 1913, she got her “Lady” title thanks to a brief marriage to British Lord Thomas Newborough and went by Denisa, Lady Newborough, or sometimes as Lady Denisa de Newborough, until her death in 1992.

But her marriage to Lord Thomas is not what gave her legendary fame.

Maguire’s portrait of her dancing on the cover of FIRE IN MY BLOOD is hot, but Denisa may have been even hotter in real life. 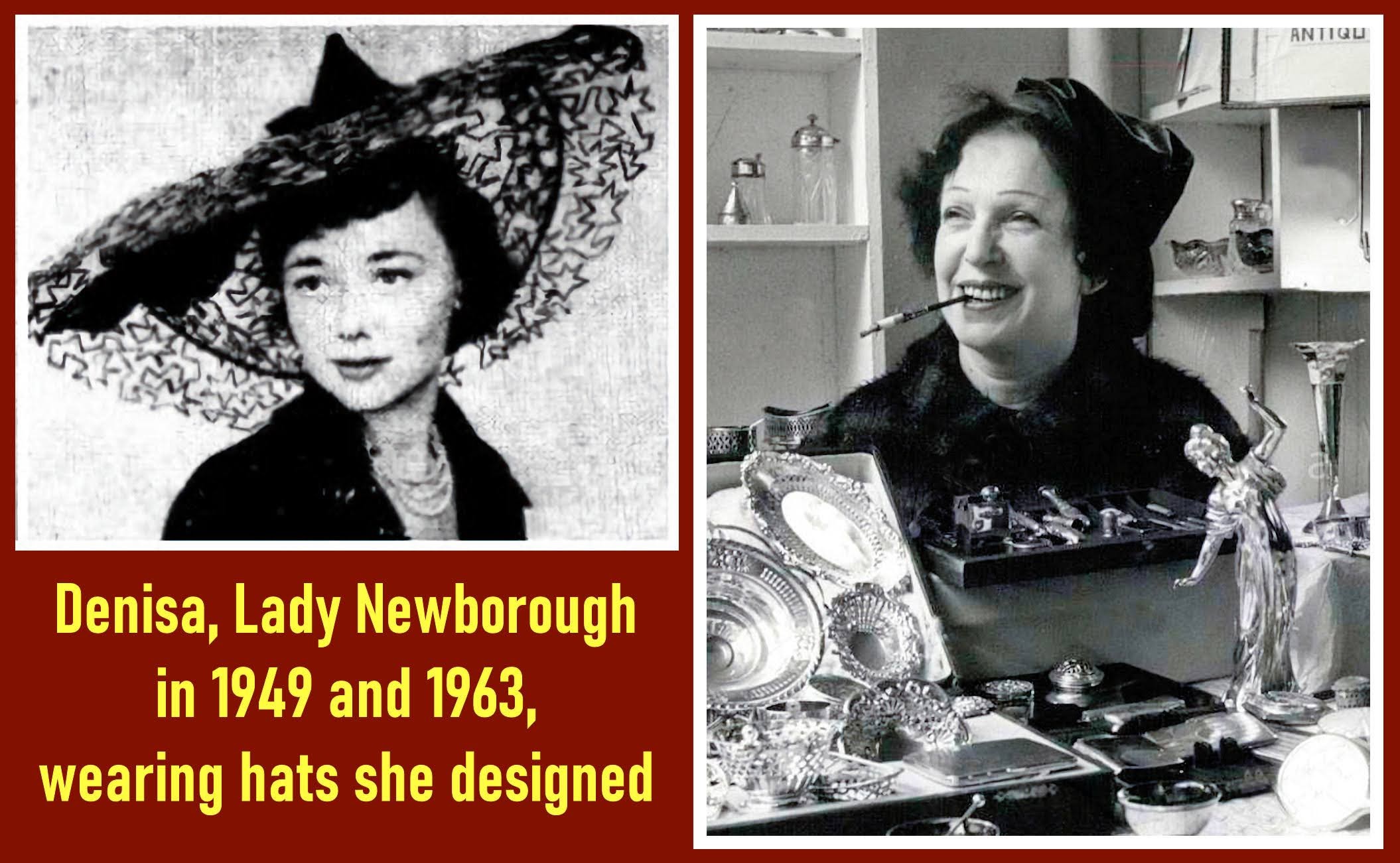 As a young woman she gained a reputation and many admirers for being a nude dancer in nightclubs, a high wire walker, and a pioneering female pilot.

According to her obituary:

“Her admirers included the Kings of Spain and Bulgaria, Adolf Hitler (whose virility she doubted), Benito Mussolini (whom she described as a ‘gigolo’) and Sheikh ben Ghana. She only refused to be two things – a whore and a spy – ‘and there were attempts to make me both’, she once wrote.”

“The Deadly Stripper” in MAN’S MAGAZINE, January 1962 is a “Book Bonus” version of the Mike Shayne novel KILLERS FROM THE KEYS, first published in 1962.

The cover for the Dell paperback edition of KILLERS FROM THE KEYS is one of those done by Robert McGinnis.

According to the checklist in THE PAPERBACK COVERS OF ROBERT MCGINNIS, nearly 100 Mike Shayne paperbacks feature McGinnis cover art.

The “Book Bonus” version of the book in MAN’S MAGAZINE, January 1962 includes three black-and-white illustrations by an uncredited artist, in addition to the reuse of Robert Maguire’s cover art for FIRE IN MY BLOOD.

Maguire’s painting and two of the same B&W illos are also used for a reprint of the same “Book Bonus” version of KILLERS FROM THE KEYS in the 1962 Fall Annual issue of MAN’S MAGAZINE. 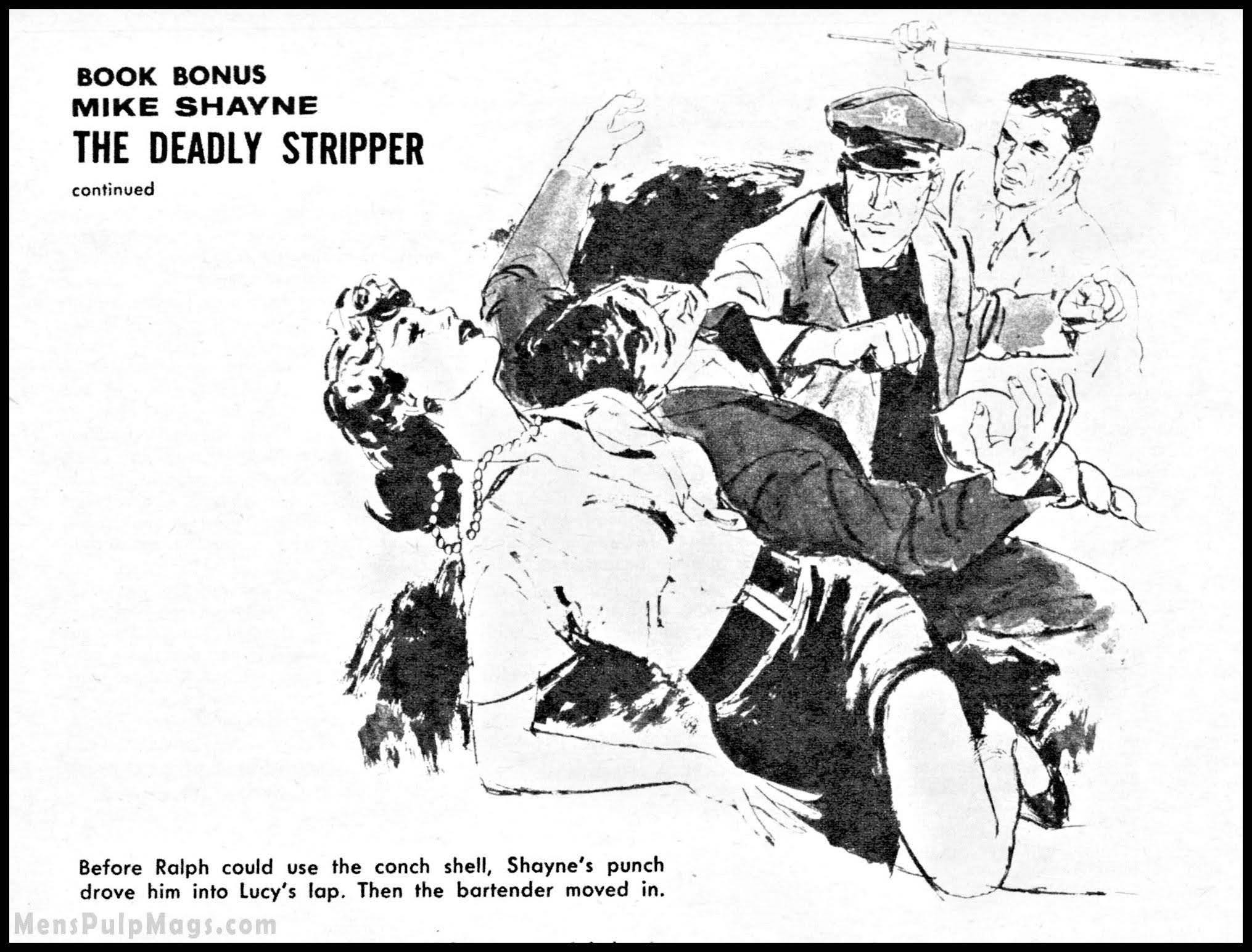 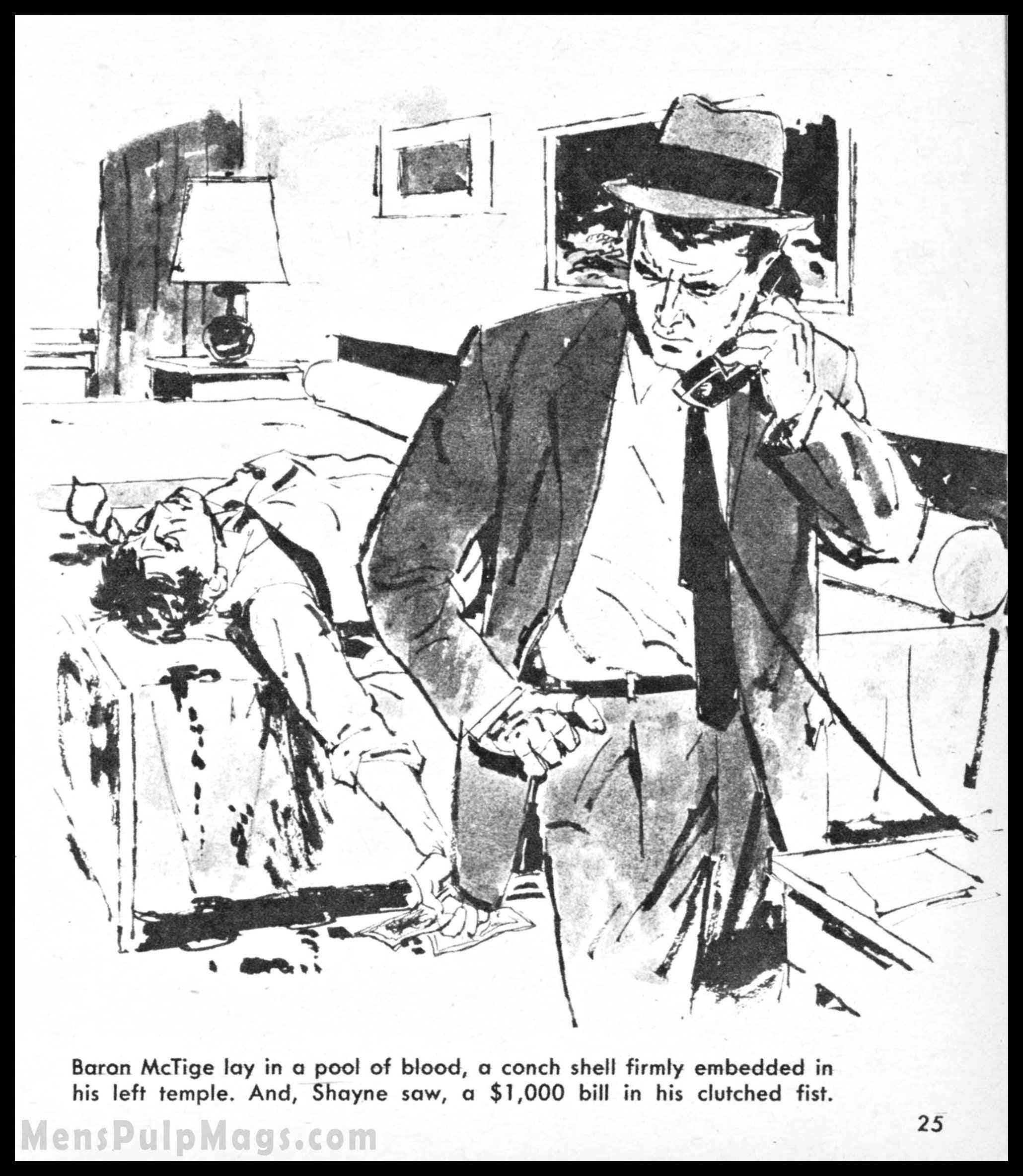 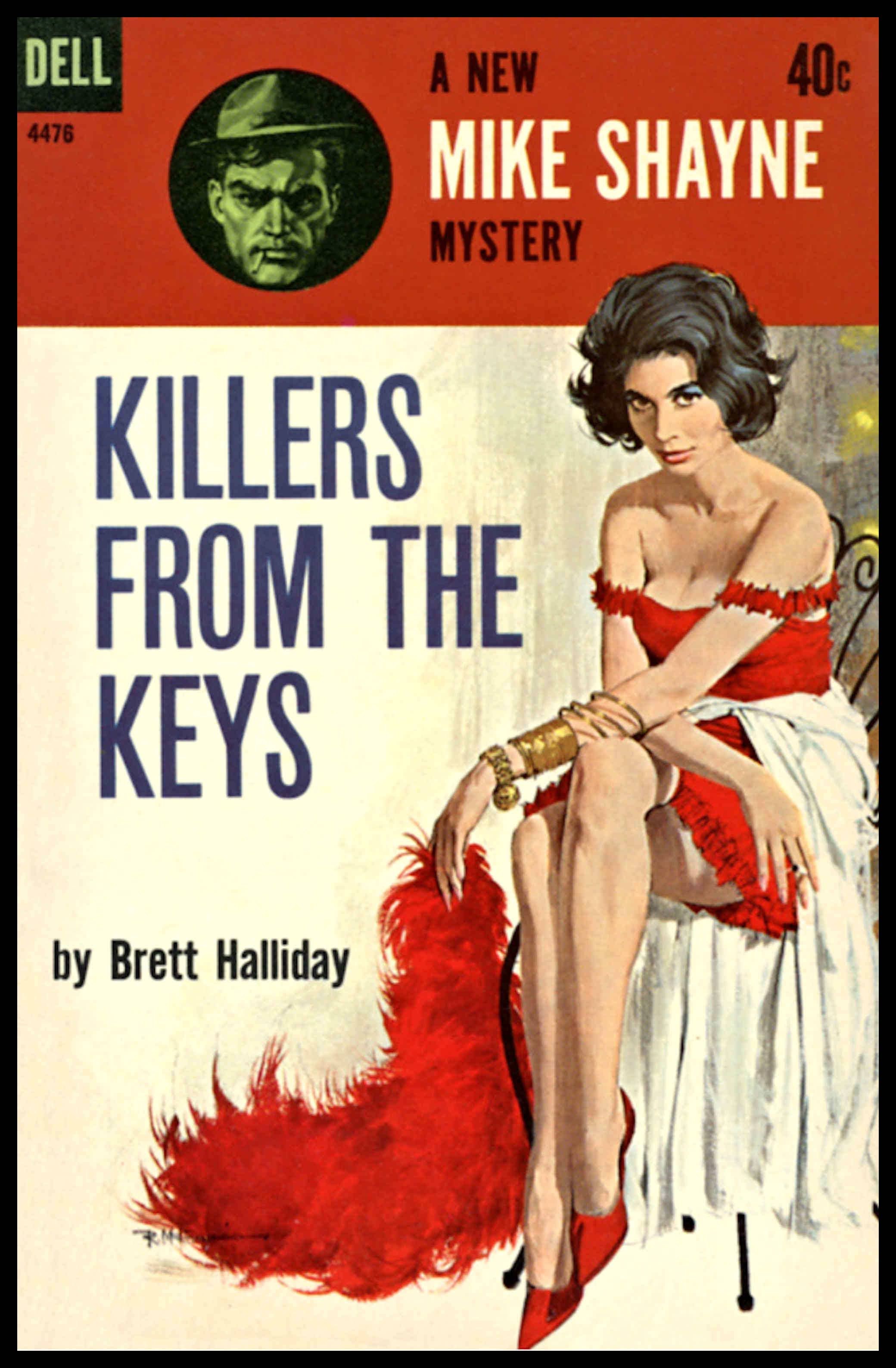 Unfortunately, I don’t have a copy of ARGOSY, June 1962. If you have one and want to sell it or can give me a scan of the Mike Shayne story illustration in that issue, please email me.

I do have ARGOSY, November 1962. The story in that one, “Never Kill a Client,” features an illustration by another artist who is best known for his paperback cover art – Baryé Phillips. The story was expanded and published as a novel by the same name in 1963.

The cover art on the Dell edition is another masterpiece by Robert McGinnis. The original painting for it was sold by Heritage Auctions in 2010 for over $16,000. I wonder what it would sell for today? 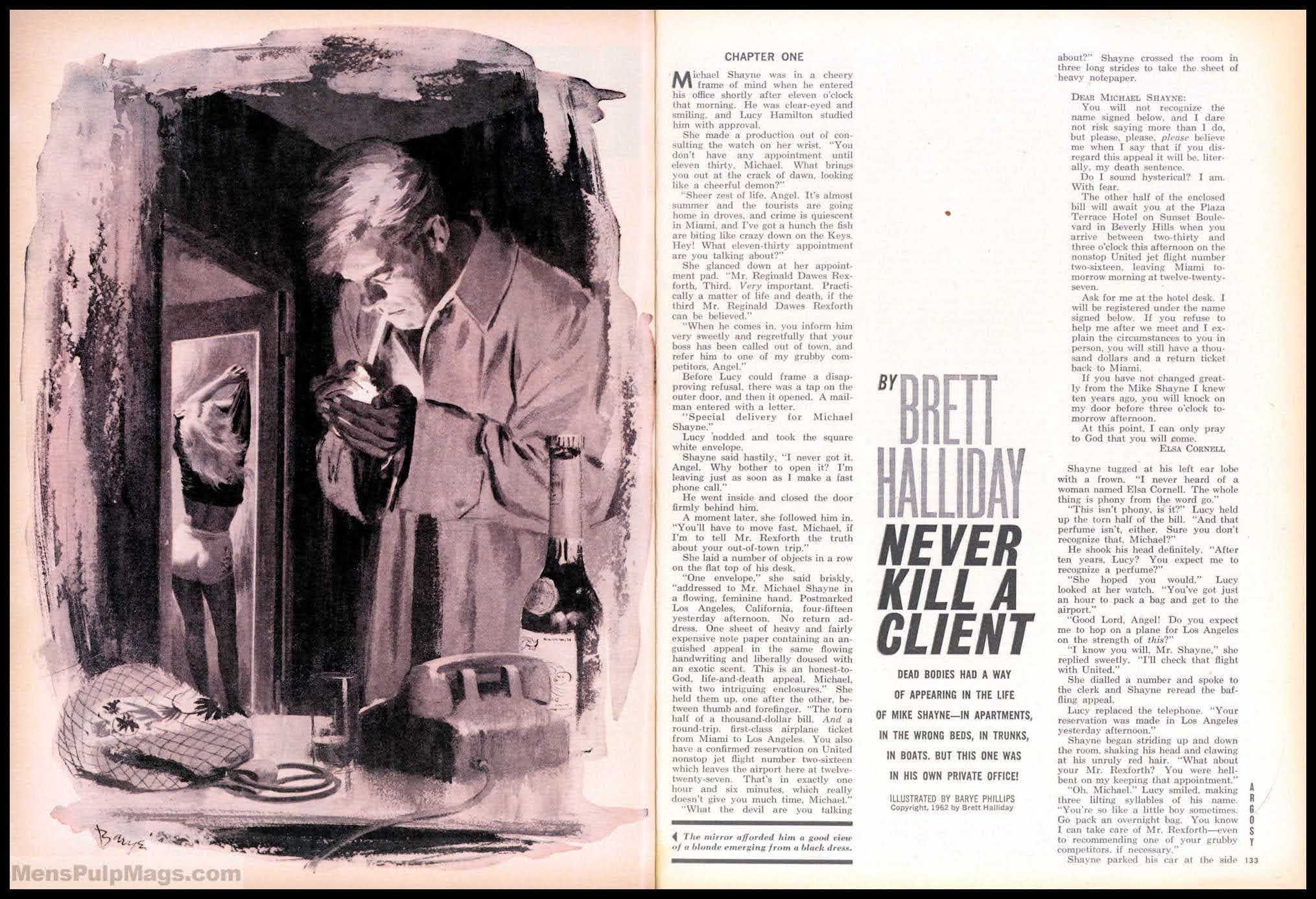 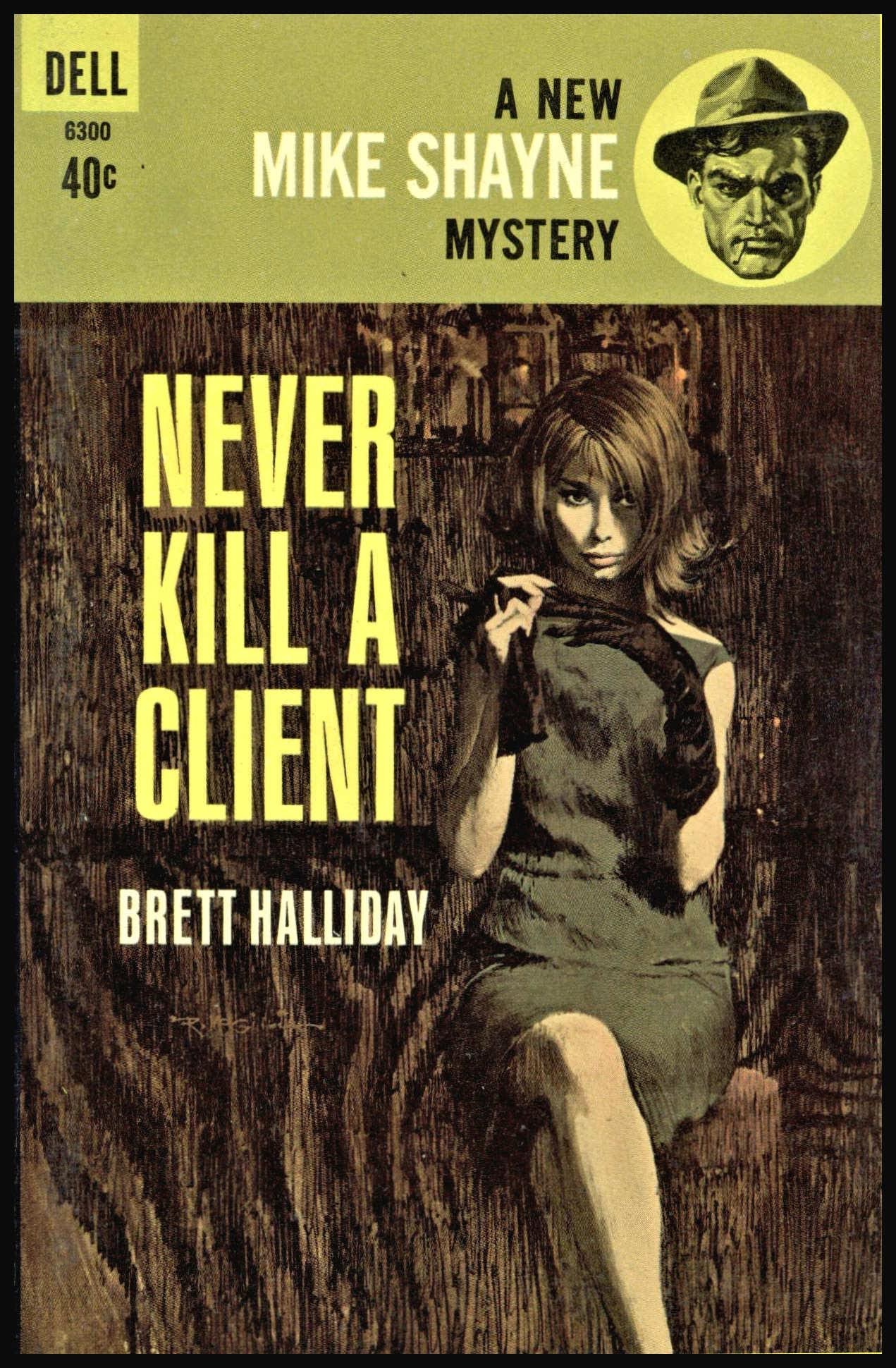 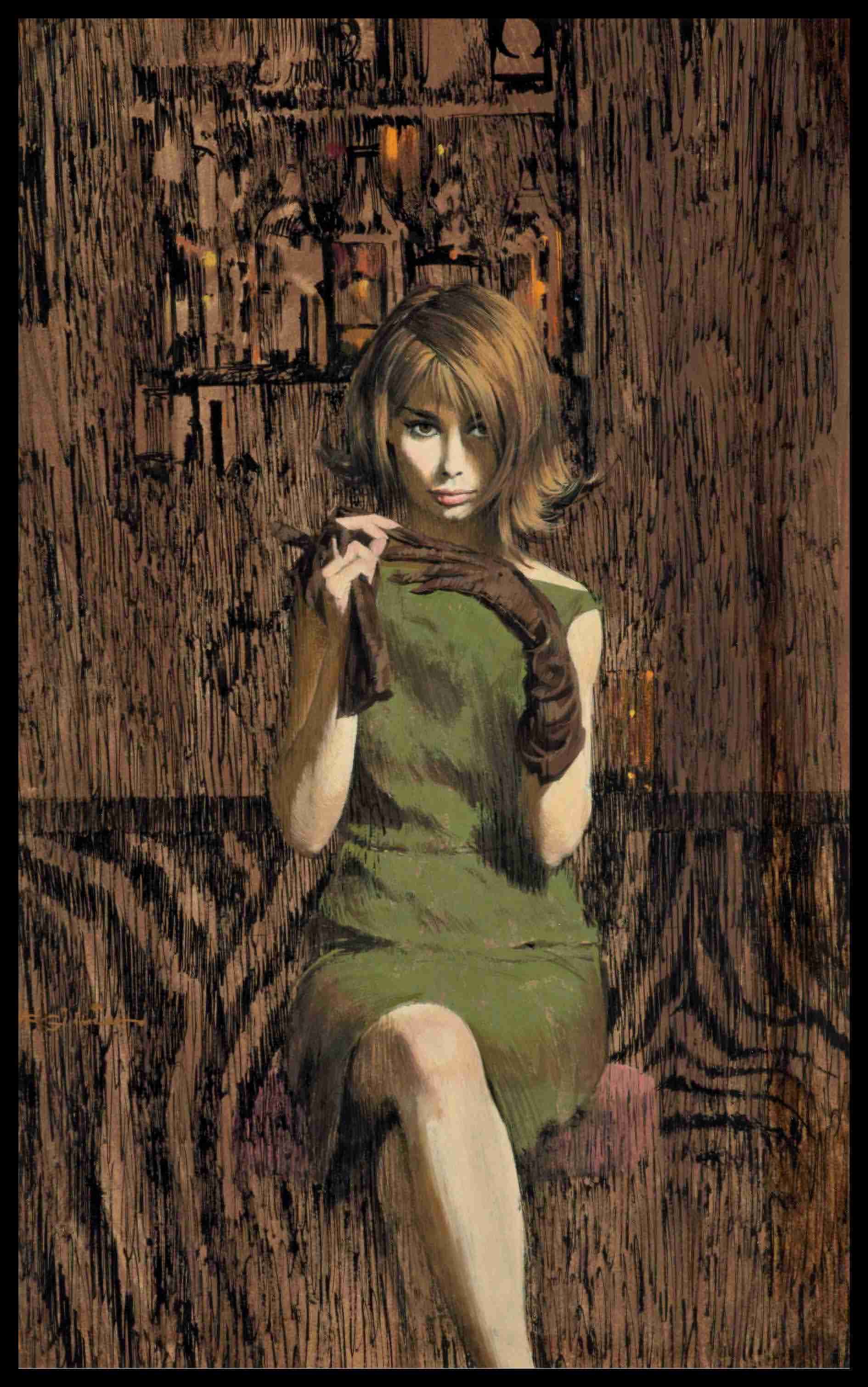 Coming up, one more post about Mike Shayne stories in MAMs. Or, maybe two.

AN UPDATE: Action/adventure novelist Stephen Mertz told me in a comment on Facebook that “Never Kill a Client” was written by Dennis Lynds under what had become the Brett Halliday house name. Lynds wrote scores of popular mystery and crime novels under his own name and his well-known pseudonym Michael Collins, which he used for his Dan Fortune series. Mertz, who has himself written scores of novels under his own name and pseudonyms (including fan favorite Mack Bolan novels), is still writing and recently launched the excellent new CODY’S WAR series, which I highly recommend.

PAPERBACK FANATIC: ISSUE #43 – another must have issue…