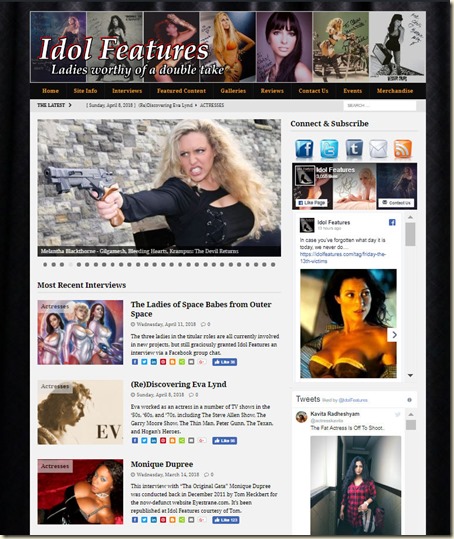 Recently, Chris Charles, Founder and Editor-in-Chief of IdolFeatures.com asked me if I’d like to do some guest posts on his website.

I took some time to explore the site and was highly impressed.

The subtitle of Idol Features is “Ladies worthy of a double take.”

That fits both the visual and written content of the site well.

Many of the women featured on it are certainly beautiful, partly because many are current or former actresses or models.

But they are also worth a double take because they tend to be intriguing people, as you find out of you read the interviews, profiles and articles on Idol Features.

Some of the ladies are indie TV, movie or online media producers.

Others are Cosplay stars, musicians, and artists.

I was also impressed by the writers for the site and the quality of their interviews and articles.

For example, Chris Charles is himself a veteran writer for various media outlets.

He has done interviews with scores of women from the entertainment industry that are posted on the site. One of his latest is an interview with the three lead actresses in the gonzo science fiction comedy SPACE BABES FROM OUTER SPACE, Alyss Winkler, Ellie Church and Allison Maier.

Chris has also written many cool articles for the site, such as his series featuring 20 actresses who were victims in movies in the FRIDAY THE 13th series.

Another recent post on idol Features that caught my eye was an interview with the UK makeup/SFX/cosplay artist “Peaches and Cream” conducted by guest contributor Arfon Jones.

Although I didn’t know about her until I read that interview, I did know something about Arfon.

He’s an artist/illustrator in Wales whose work has appeared in many books, comics, magazines, and elsewhere. 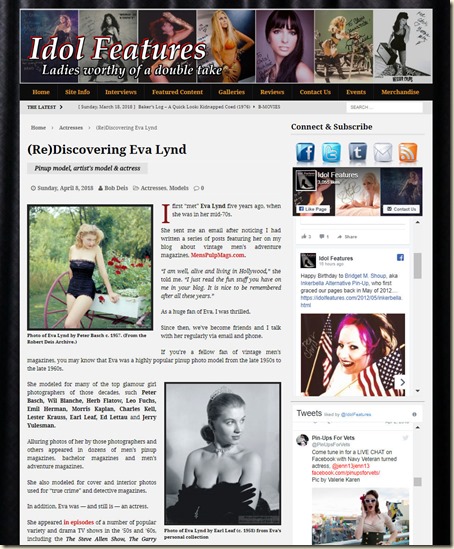 Among other things, Arfon and I share a love of the realm of cryptozoology and reverence for the famed monster maven Loren Coleman.

Loren is a leading authority on cryptozoology lore, the author of many of the best books about legendary cryptid creatures, and Founder of the International Cryptozoology Museum in Portland, Maine.

He was greatly helpful to us when we were creating our book collecting men’s adventure magazine stories and artwork about Bigfoot, Sasquatch and other legendary monsters, the CRYPTOZOOLOGY ANTHOLOGY.

My fellow Loren Coleman fan Arfon drew a terrific portrait of Loren that I’d seen many times, since it served as Loren’s profile pic on Twitter and Facebook for quite a while. You can see a scan of it on Arfon’s blog.

Another notable guest contributor on Idol Features is “cheesecake cartoonist,” classic glamour girl photo collector, and writer Rock Baker, who has worked for AC Comics, Main Enterprises, and Moonstone among others.

Rock’s latest article on Idol Features is a brief review of the 1976 B-movie THE KIDNAPPED COED, which does at least have an eye-grabbing poster that almost looks like it could have been something used for a men’s adventure magazine in the “sweat mag” subgenre.

I started with one about my own favorite men’s magazine model and actress Eva Lynd, who I’ve written about on this blog many times.

It’s an overview profile piece about Eva that mentions and shows some of the classic pinup photos she modeled for.

Naturally, it also notes and shows some of the men’s adventure magazine cover and interior artwork she modeled for, done by top MAM artists Norm Eastman and Al Rossi.

You can read my inaugural Idol Features post by clicking this link.

While you’re there, I encourage you to take some time and explore the site.

You’ll probably know some of the ladies featured and find many you didn’t know to be quite intriguing.

Thanks to Chris Charles for ushering me and Eva Lynd into the Idol Features family!

BOOKS I CO-EDIT ON AMAZON, INCLUDING OUR NEW ART BOOK POLLEN’S WOMEN