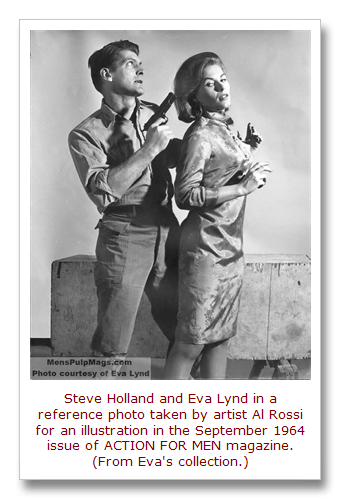 About a year ago, after I did some initial posts here about Eva Lynd, the legendary artists’ model, pinup glamour girl and actress, I got a surprise email from Eva herself.

That led to a wonderful ongoing correspondence that expanded to include my friend Rich Oberg, the men’s pulp art collector, and Wyatt Doyle, my co-editor on two anthologies of classic men’s pulp adventure magazine stories.

Almost every week, the four of us discuss or discover illustrations by Norm Eastman, Al Rossi or some other artist Eva modeled for in the 1950s and 1960s, or glamour photos of her featured on magazine covers or inside spreads.

Recently, we worked together to solve the mystery of two artist reference photos Eva shared with us.

Eva didn’t know what artwork they’d been used for. And, she no longer remembered if the photos had been given to her by Eastman or Rossi, though she was pretty sure it was one of them.

Norm and Al used Eva regularly and both took their own reference photos of models (as did most illustration artists who provided artwork to the men’s pulp adventure mags and pulp paperbacks). 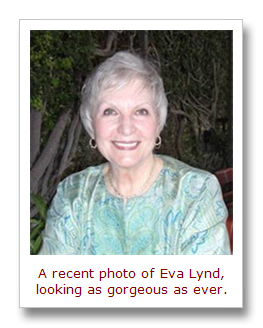 One of the photos Eva sent us is a priceless piece of illustration art history. It shows her with Steve Holland, the favorite male model of Eastman, Rossi and just about every other top men’s adventure and paperback cover artist of the Fifties and Sixties.

Holland is holding a pistol to Eva’s head and looking up at something. Eva is wearing an Asian-looking dress and glancing back apprehensively at the gun.

When Eva emailed a scan of the photo to us she wrote:

“This is one of the photos Eastman or Rossi took of me and Steve Holland. I don’t know where the rendition of it got published. If you do, let me know. It does not appear to be like Norm’s usual bondage and torture stuff.”

None of us recognized it off the bat, but we began keeping an eye out for an illo that fit. Eventually, while leafing through a copy of the September 1964 issue of ACTION FOR MEN, I saw one that solved the mystery.

There, in the lower left hand part of an illustration Al Rossi created for a “Special Book Bonus” was an image that was clearly based on the photo of Steve and Eva.

The story, by Manning Lee Stokes, is titled “STRANGE SECRET OF KOREA’S NIGHTTIME NYMPH.” A note at the bottom of the page says it was excerpted from Stokes’ novel UNDER COVER OF NIGHT, which was first published in 1958. 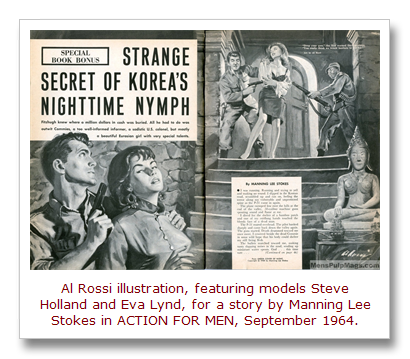 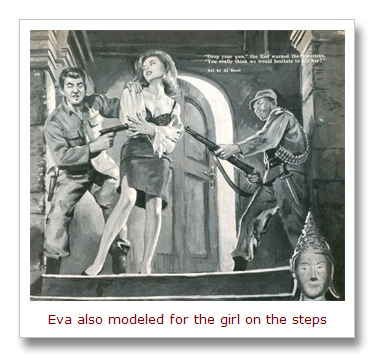 Stokes was a prolific author of pulp fiction novels, which he wrote under his own name and at least nine pseudonyms. Most books credited to his real name are mysteries published in the 1940s and 1950s. In the Fifties, he also wrote “sleaze” paperbacks and Westerns under the name Kermit Welles and romance novels using the female pen name Bernice Ludwell.

In the Sixties and up until his death in 1976, Stokes wrote dozens of novels under house names and pseudonyms, including nearly twenty of the Nick Carter spy novels, eight of the Richard Blade heroic fantasy books and eleven novels in The Aquanauts action/adventure series, under the name Ken Stanton. 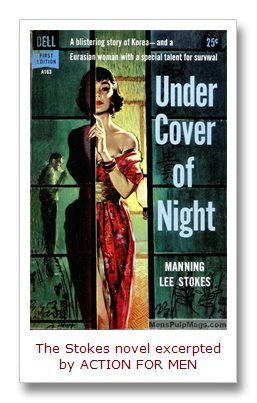 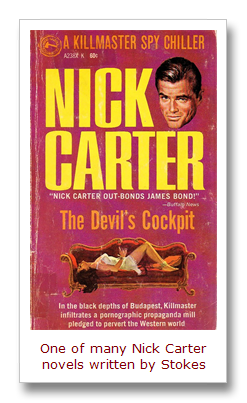 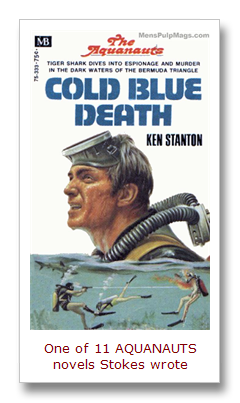 When I sent Eva a scan of the Al Rossi’s illustration for the Manning Lee Stokes “book bonus” in ACTION FOR MEN it led to several revelations. It confirmed that the photo was taken by Al Rossi and helped Eva remember that the other mystery photo she’d sent us was also taken by him.

In addition, since the face of the Asian-looking woman Rossi painted in that illo doesn’t quite look like Eva, it also confirmed something else we suspected. Since Rossi sometimes changed a model’s face and hair in his paintings, some of the magazine and paperback cover illustrations he did with women who don’t look like Eva may in fact be her. 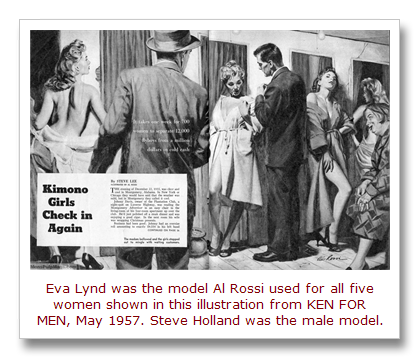 “This is very exciting. I would not necessarily have thought that this was me if I didn’t have the photo. Of course, Al didn’t give me copies of all the pictures he took of me, only some. But this one certainly proves that some of the women in Rossi illustrations that I am not sure about could very well be me.

In this one, with Steve and the gun, there is no question about it. The other woman in the background is me, too. Al used me in various poses and setups at each photo session. In fact, in the Al Rossi illustration you posted a while ago [from KEN FOR MEN, May 1957], I was the model for all five women, even though only a couple of them look like me.”

Eva recently solved a second reference photo mystery herself. She discovered the illustration it was used for while browsing eBay to find men’s adventure magazines that contained artwork by Al Rossi and Norm Eastman.

As soon as she found it, she sent me a link to the listing with a note:

“Hi Bob: Check this out. I think I was the model for the ‘naked blonde’ in this one. It is by Al Rossi and has the girl in the same pose as one of the photos I sent to you.”

Sure enough, there it was in another issue of ACTION FOR MEN, from January 1966.

The illustration shows a woman doing a striptease dance on top of a wooden crate, very similar to Eva’s dancing/balancing pose in Rossi’s reference photo.

It was used for a “Book Bonus” thriller by Carter Brown, published in the magazine under the title “NAKED BLONDE OF STRIPPER ALLEY.” 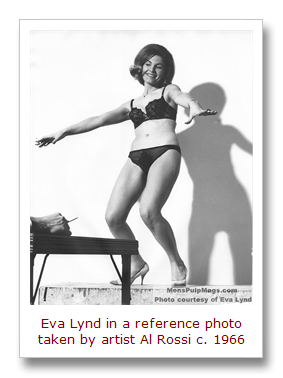 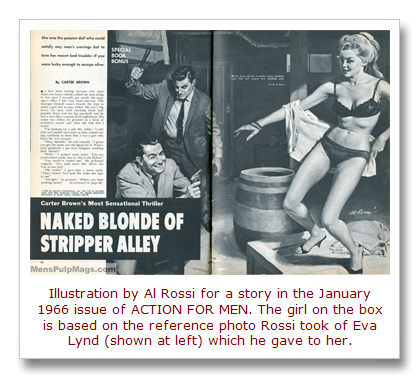 As noted on the great Killer Covers site (one of my faves), Carter Brown’s real name was Alan Geoffrey Yates. He was born in England in 1923, moved to Australia in 1948 and began his career as a writer in 1951. During the 1950s, 1960s and 1970s, Brown was one of the best-selling mystery novelists in the world. He’s one of Australia’s most famous writers of any kind.

Brown was was even more prolific than Manning Lee Stokes. He churned out more than 300 books before his death in 1985. Most are mystery novels in one of his several long-running series that featured male detectives and lawmen, including Larry Baker, Danny Boyd, Paul Donavan, Rick Holman, Andy Kane, Randy Roberts and Al Wheeler.

The story in the January 1966 issue of ACTION FOR MEN, with the Al Rossi illo Eva Lynd modeled for, was taken from his novel THE BUMP AND GRIND MURDERS. It was first published by Signet in 1964 with a front-and-back wraparound cover painting by the great Robert McGinnis, who did covers for many of Carter Brown’s pulp paperbacks. 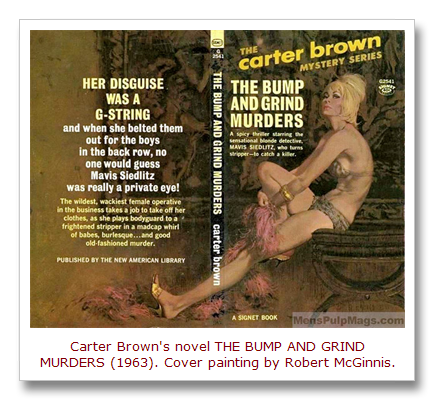 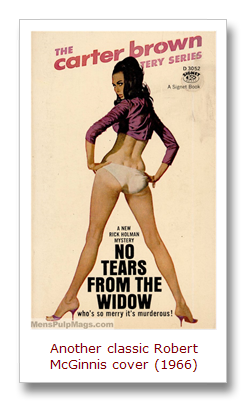 THE BUMP AND GRIND MURDERS was one of Brown’s series of novels featured the blonde bombshell female private investigator, Mavis Seidlitz. In it, Mavis goes undercover as a stripper.

Speaking of which, one of Carter Brown’s best known novels is the THE STRIPPER. It was published in 1961, with another memorable McGinnis cover painting, and is in his series of novels about California homicide investigator Al Wheeler.

Somewhat incredibly, it was turned into a musical in 1982 by members of the team that created THE ROCKY HORROR SHOW. If you’re a ROCKY fan like me, be sure to check out the songs from their version of THE STRIPPER on the RockyMusic.org website. The tracks from the original vinyl soundtrack LP have all been converted into streaming sound files you can listen to online. 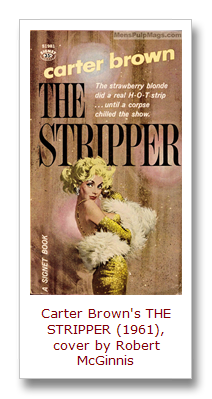 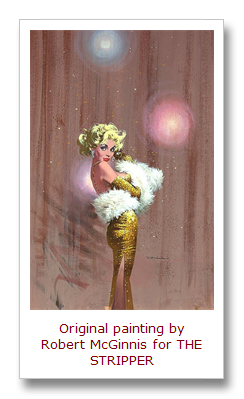 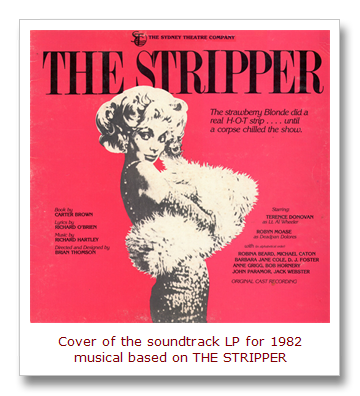 Coming up in future posts, a look at some more priceless pop culture treasures from Eva Lynd’s collection.

In the meantime, if you’d like to read one of the men’s “sweat magazines” that has a classic Norm Eastman cover painting with characters based on Eva Lynd and Steve Holland, click the link or image below to download a complete copy of the October 1968 issue of NEW MAN magazine in the MensPulpMags.com virtual newsstand.