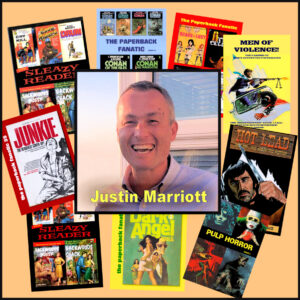 Justin Marriott and Paul Bishop are two of my favorite pulp culture mavens. (“Pulp culture” is a term I borrowed from the book of that name by Frank M. Robinson and Lawrence Davidson and expanded to encompass both early pulp magazines and pulp art and later magazines, books and movies that have pulpy DNA, such as men’s adventure magazines and action/adventure paperbacks and movies.)

Justin is a publisher of fanzines that focus primarily on mid- to late-20th Century pulp paperbacks, including THE PAPERBACK FANATIC, THE SLEAZY READER, PULP HORROR, and MEN OF VIOLENCE.

Paul is a former L.A.P.D. police detective who went on to become a prolific novelist, editor, publisher, blogger, and pulp maven. He has written fifteen novels, including the highly-praised Fey Croaker series about a female L.A.P.D. detective.

His latest novels include LIE CATCHERS, the first in a new series about a special team of L.A. police interrogators, and the soccer-related crime novel PENALTY SHOT.

I’ve done interviews with Justin and with Paul for this blog in the past. And, since I last wrote about them, they have been busy — both separately and on a new joint endeavor: a fanzine about Westerns called HOT LEAD. 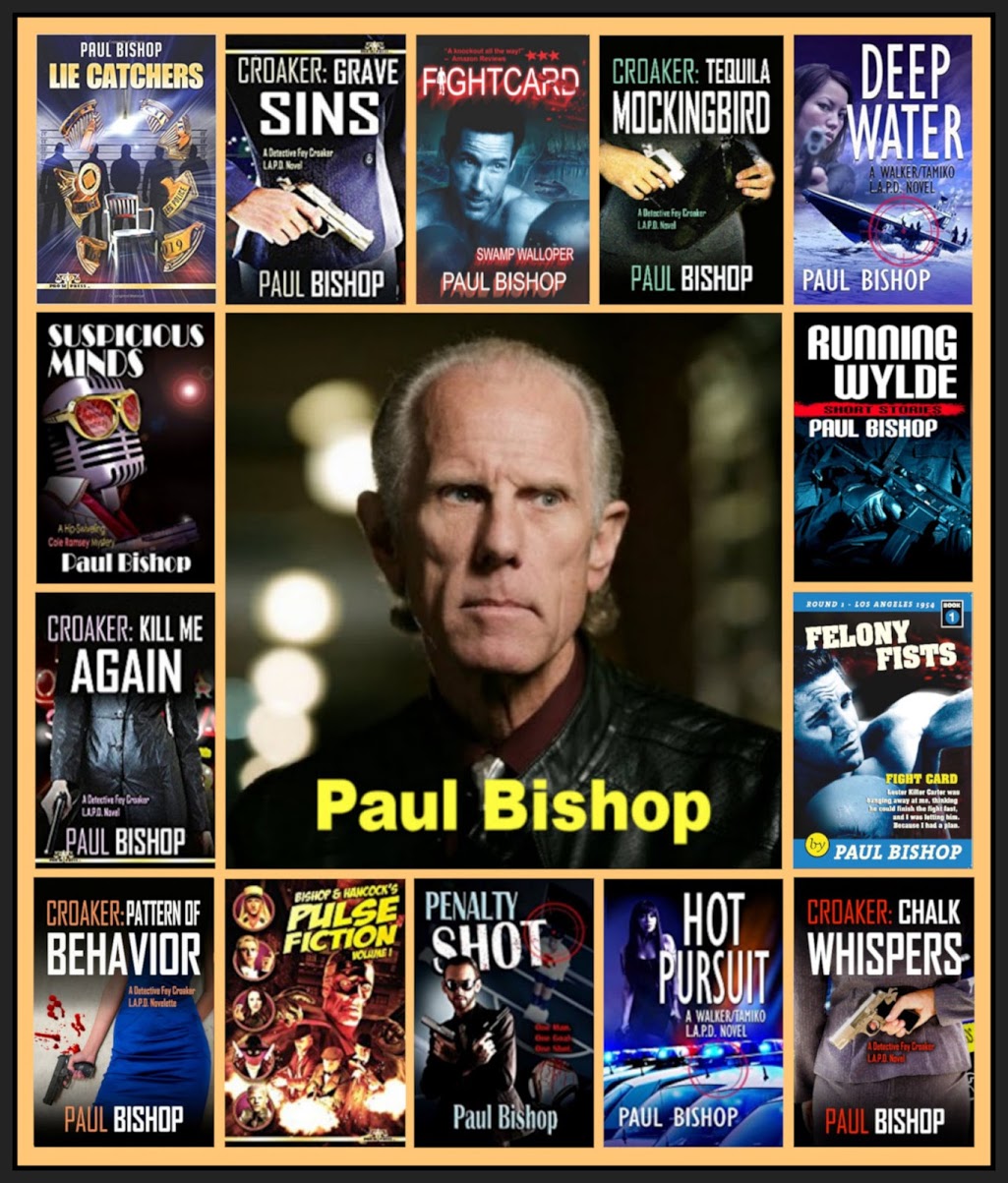 As Justin Marriott told me in the interview I did with him, he started writing and publishing his flagship fanzine, THE PAPERBACK FANATIC, in 2007.

As I write this, he’s up to Volume #41 of that venerable zine, aptly subtitled “The fanzine for collectors of vintage paperbacks.”

MEN OF VIOLENCE, which focuses on vintage men’s action/adventure paperbacks and magazines, is now up to Volume #11.

PULP HORROR, Justin’s zine about horror paperbacks, pulps and comics, is now up to Volume #8.

THE SLEAZY READER, covering the outré end of the vintage pulp paperback spectrum, is also up to Volume #8.

Justin and Paul have published two issues of HOT LEAD to date, with more to come.

In his zines, Justin publishes articles by many other knowledgeable pulp culture mavens like Paul.

For example, MEN OF VIOLENCE #11 includes an article by Morgan Holmes about the historical novels of the legendary comics writer and author Gardner F. Fox. Morgan is a top fantasy, science fiction and action/adventure expert who writes the Castalia House Books blog.

PULP HORROR #8 includes an article by Morgan about the novels of Joseph Payne Brennan, one of the last of the major authors who wrote for WEIRD TALES magazine.

I can’t recommend Justin’s fanzines highly enough. The level of knowledge and quality of the scholarship is top notch in all of them.

Those scans and other images are reproduced in full color in issues published since Justin started using Amazon’s CreateSpace publishing option several years ago. And, the prices are more than reasonable; mostly ranging from $5.99 to $10.99. 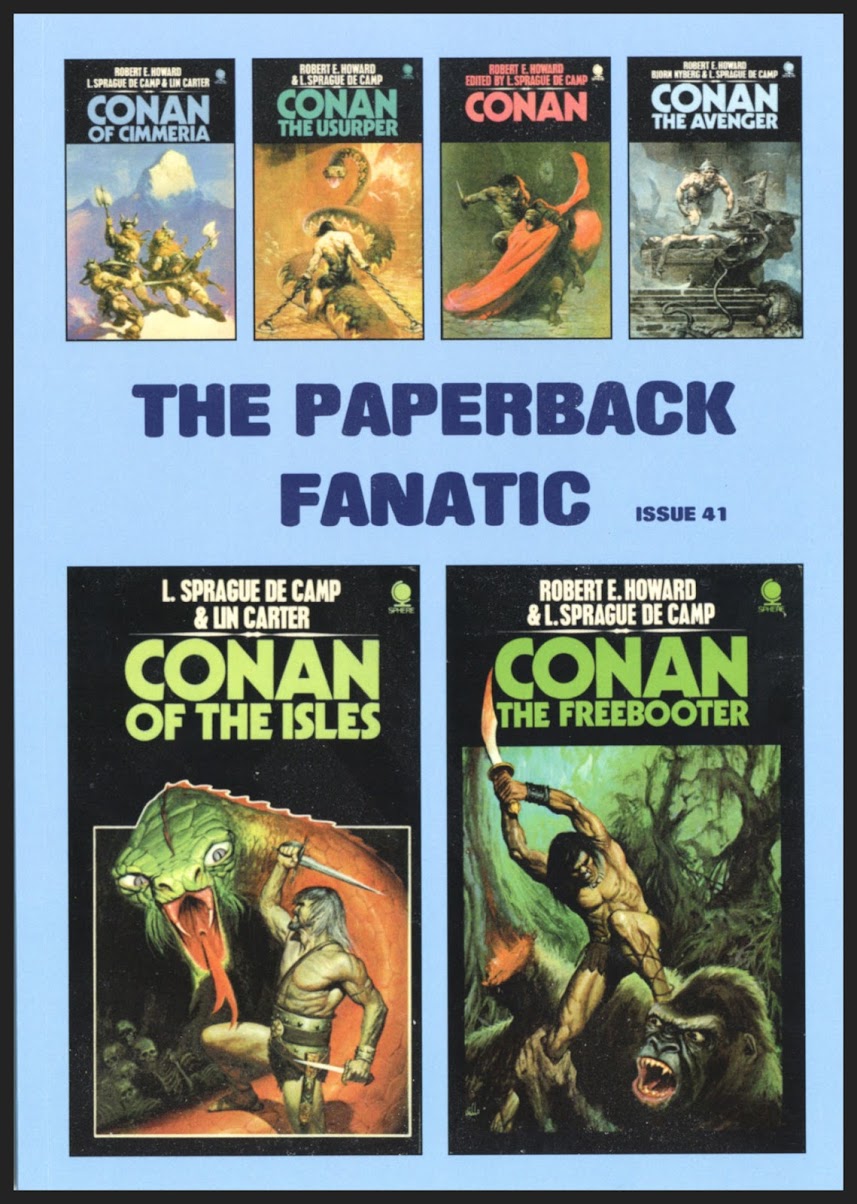 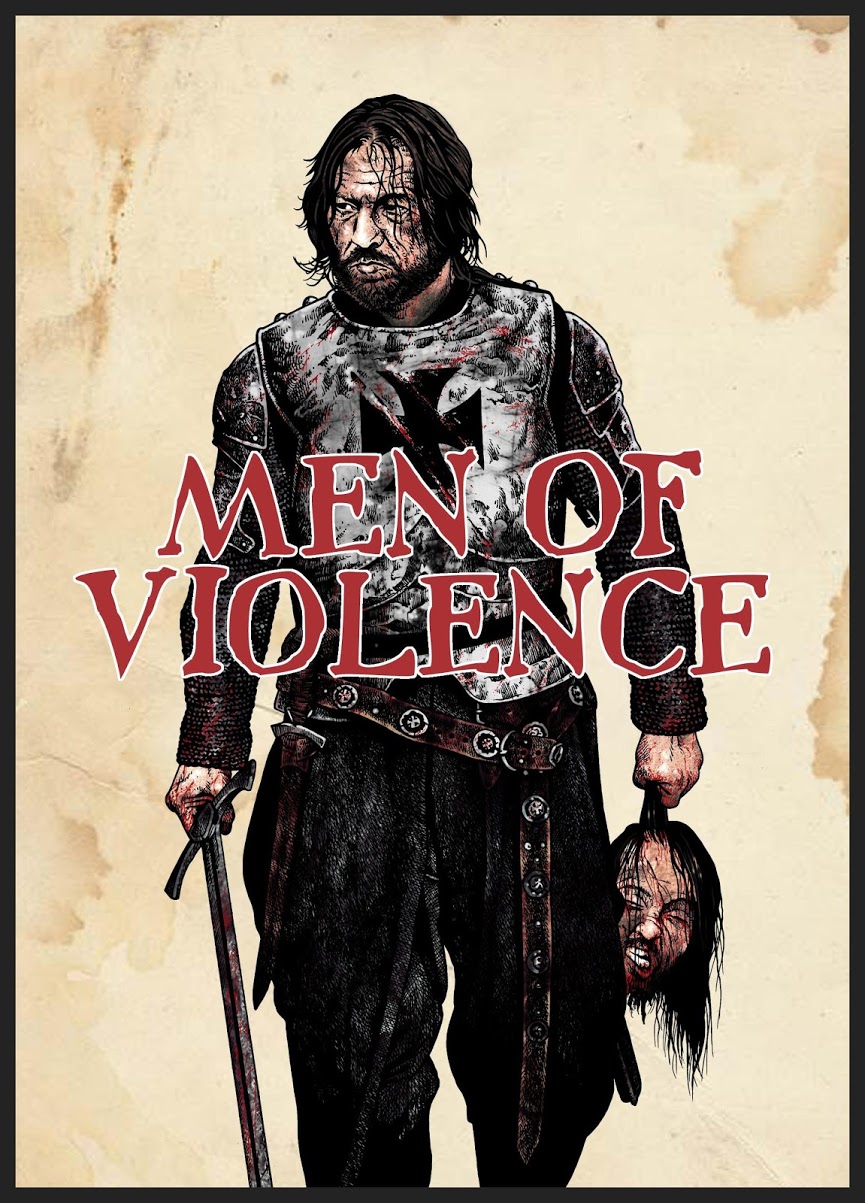 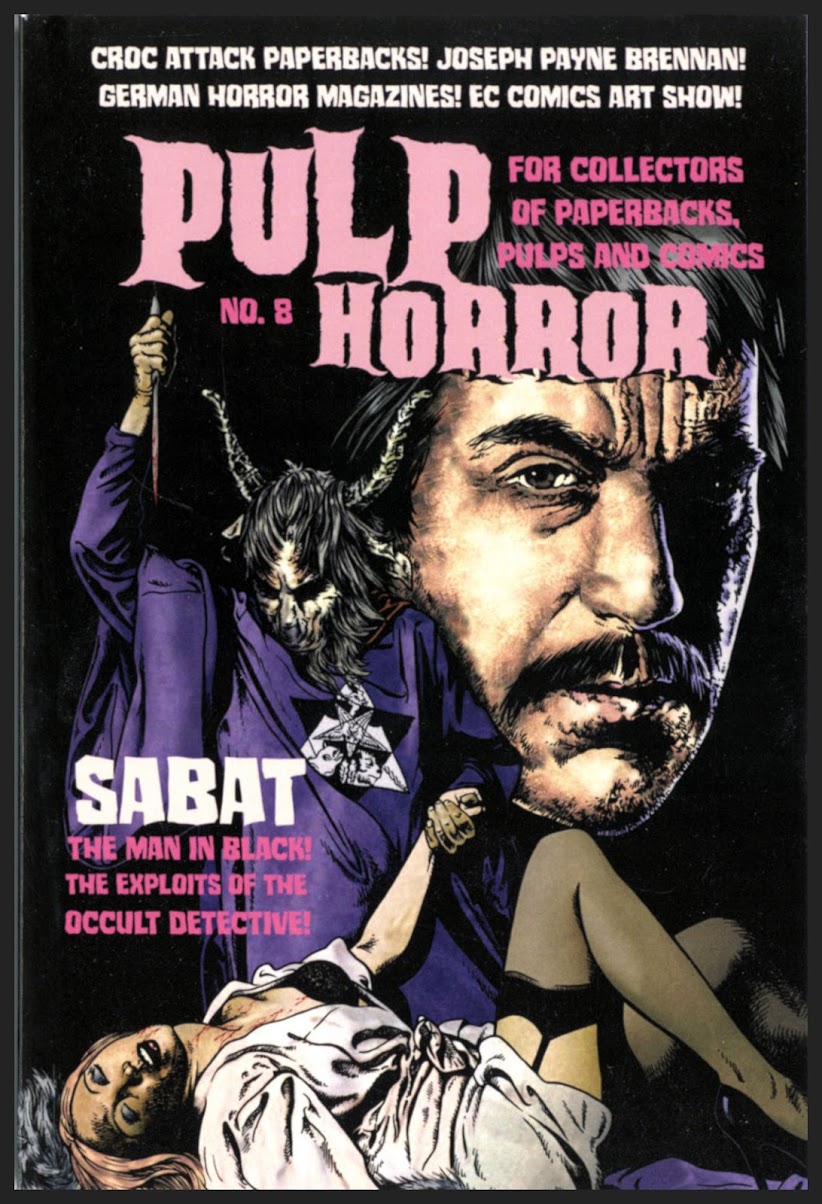 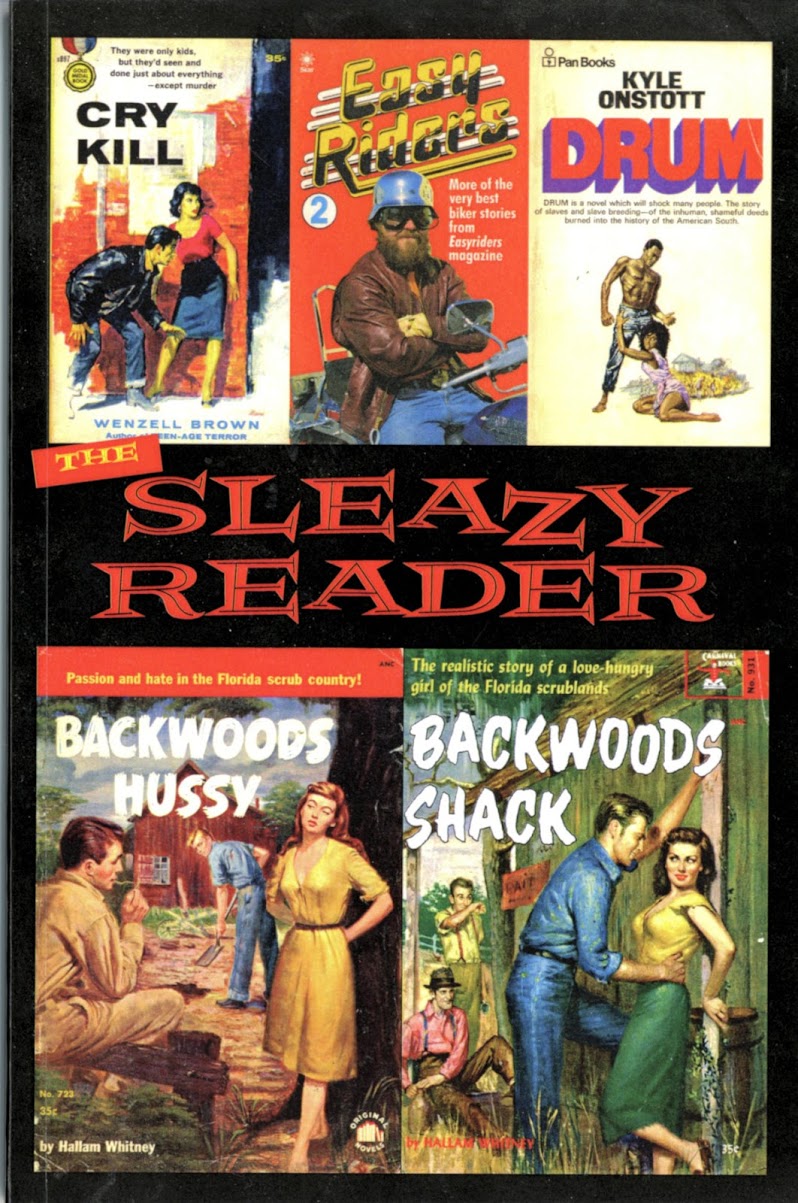 Naturally, I especially like issues that have articles connecting the dots between the related realms of vintage paperbacks and vintage men’s adventure magazines published in the ‘50s, ‘60s and ‘70s.

For example, MEN OF VIOLENCE #10 has an article about the great men’s adventure magazine and paperback artist Samson Pollen and the first book I co-edited with Wyatt Doyle to feature Sam’s original MAM artwork, POLLEN’S WOMEN. (Our second volume of Pollen artwork, POLLEN’S ACTION, was published in January 2019, shortly after Sam passed away at age 88.) 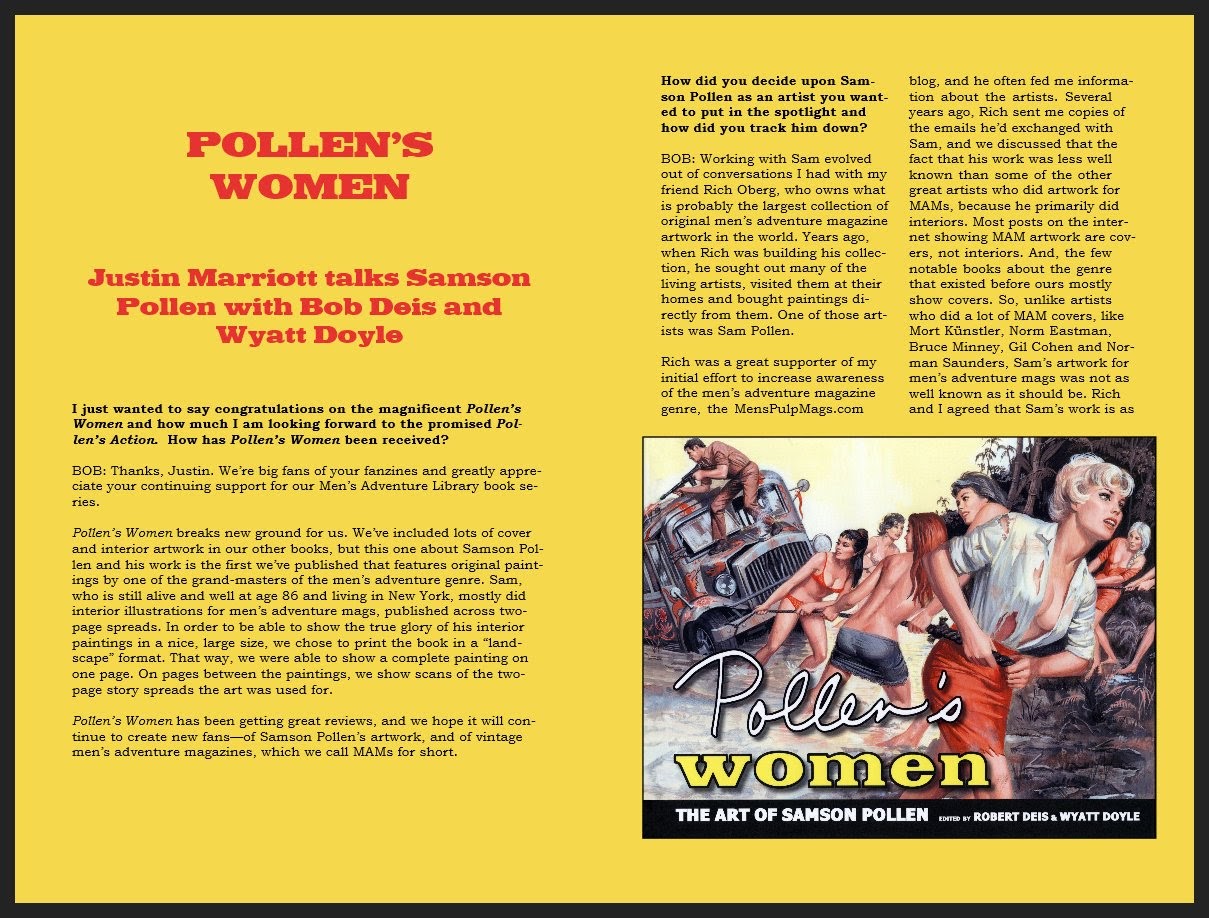 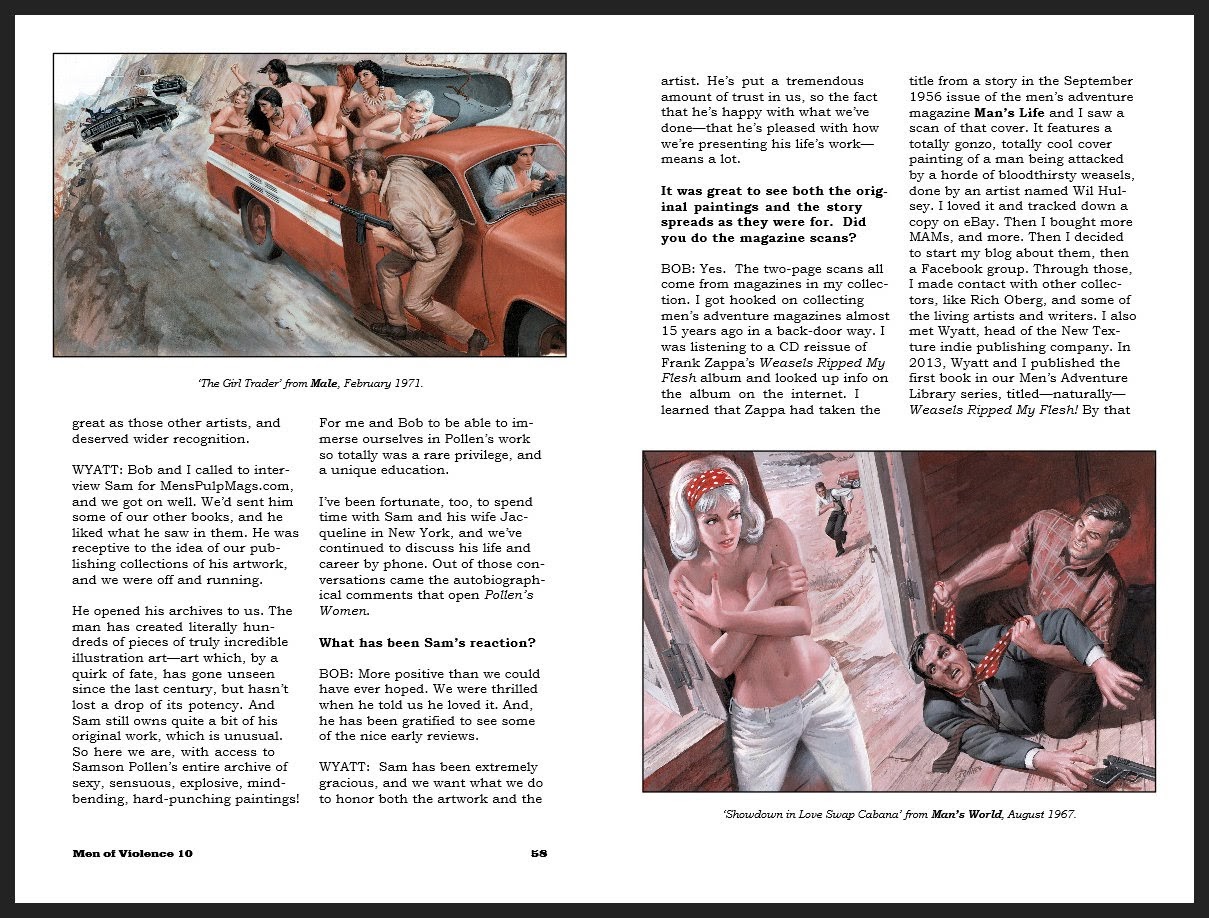 MoV #10 also includes articles by guys behind the excellent Paperback Warrior blog, Tom Simon and Eric Compton, who’ve made a splash online with their insightful reviews of vintage action, adventure, mystery and crime novels and often groundbreaking research on authors and their various pseudonyms.

Tom’s article solves the mystery of the real person who wrote the “THE D.C. MAN” series of sexy spy novels under the pseudonym James P. Cody.

Eric contributed an overview of the “ROADBLASTER” post-apocalypse trilogy penned by Paul Hofrichter. 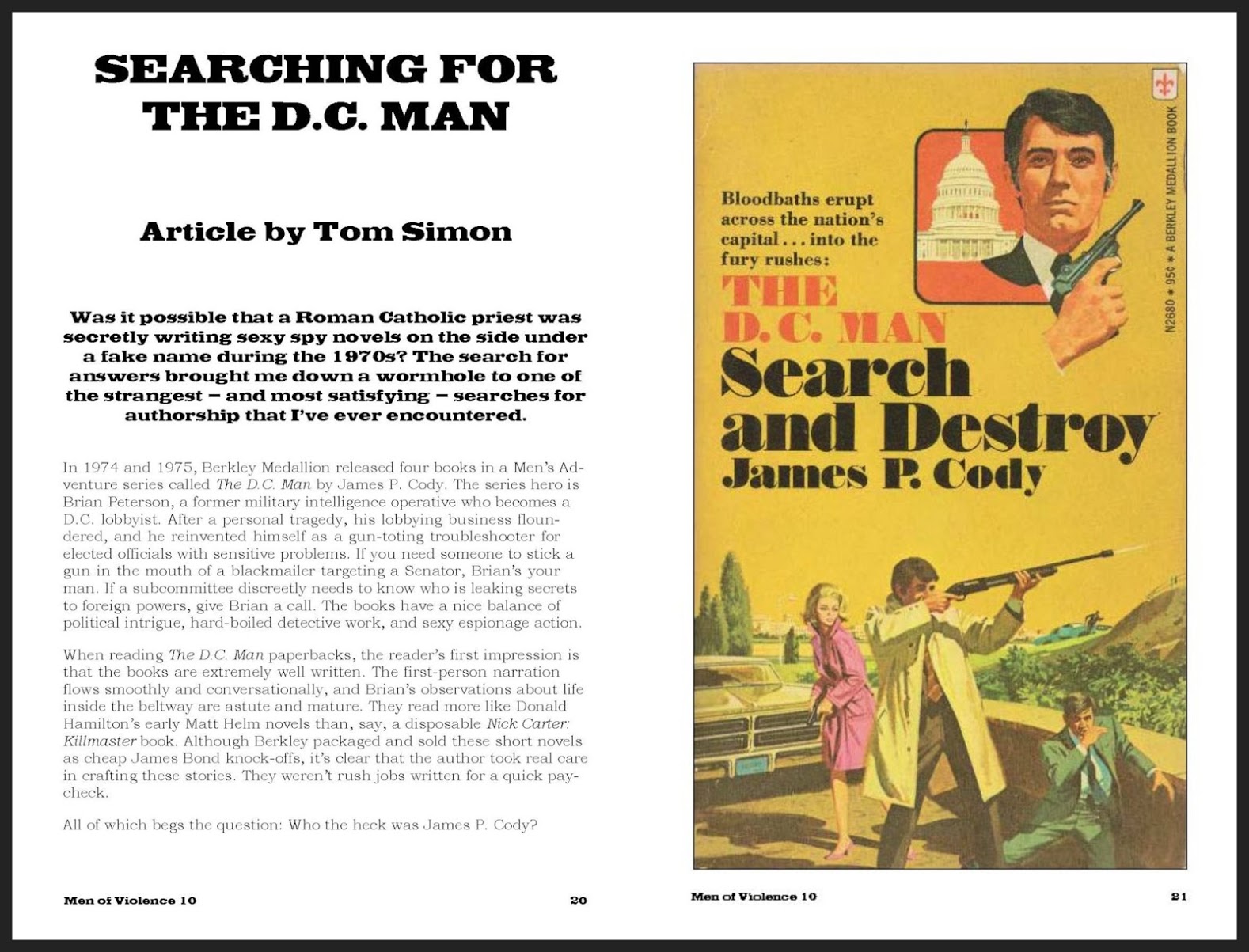 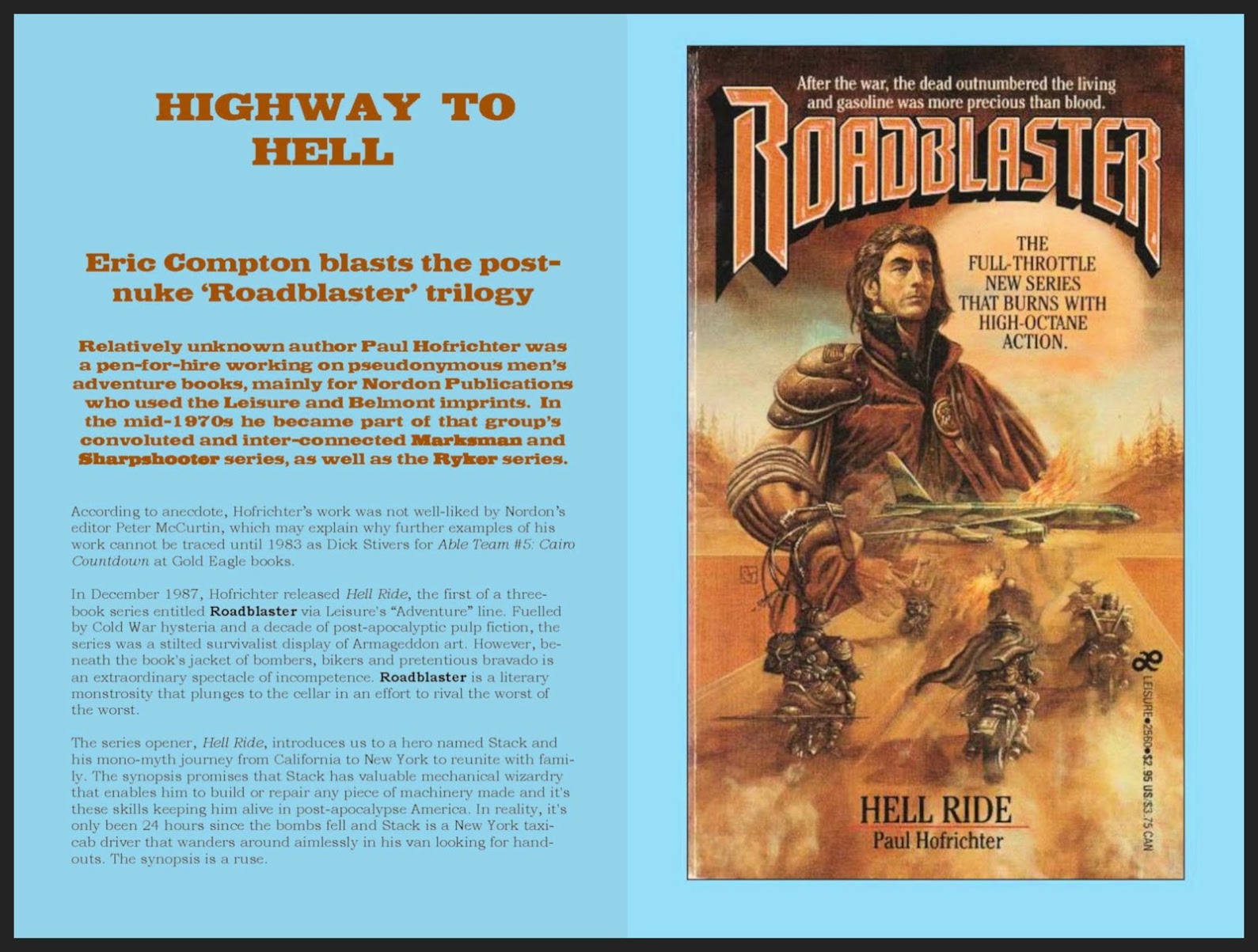 Past MEN OF VIOLENCE issues have also covered MAM-related topics that are near to my heart, such as an article in MoV #9 about the wild “killer creature” men’s adventure magazine stories and artwork featured on our book I WATCHED THEM EAT ME ALIVE.

The cover of that issue features the gonzo “killer lizards” cover art by Wil Hulsey used on TRUE MEN STORIES, February 1957. (Hulsey is the artist who created the iconic “WEASELS RIPPED MY FLESH!” cover.)

MEN OF VIOLENCE #8 includes my tribute to Walter Kaylin, one of the greatest of all MAM writers. (Walter’s rip-snorting yarns are featured in several books in our Men’s Adventure Library series and showcased in our collection of his stories, HE-MEN, BAG MEN & NYMPHOS.) 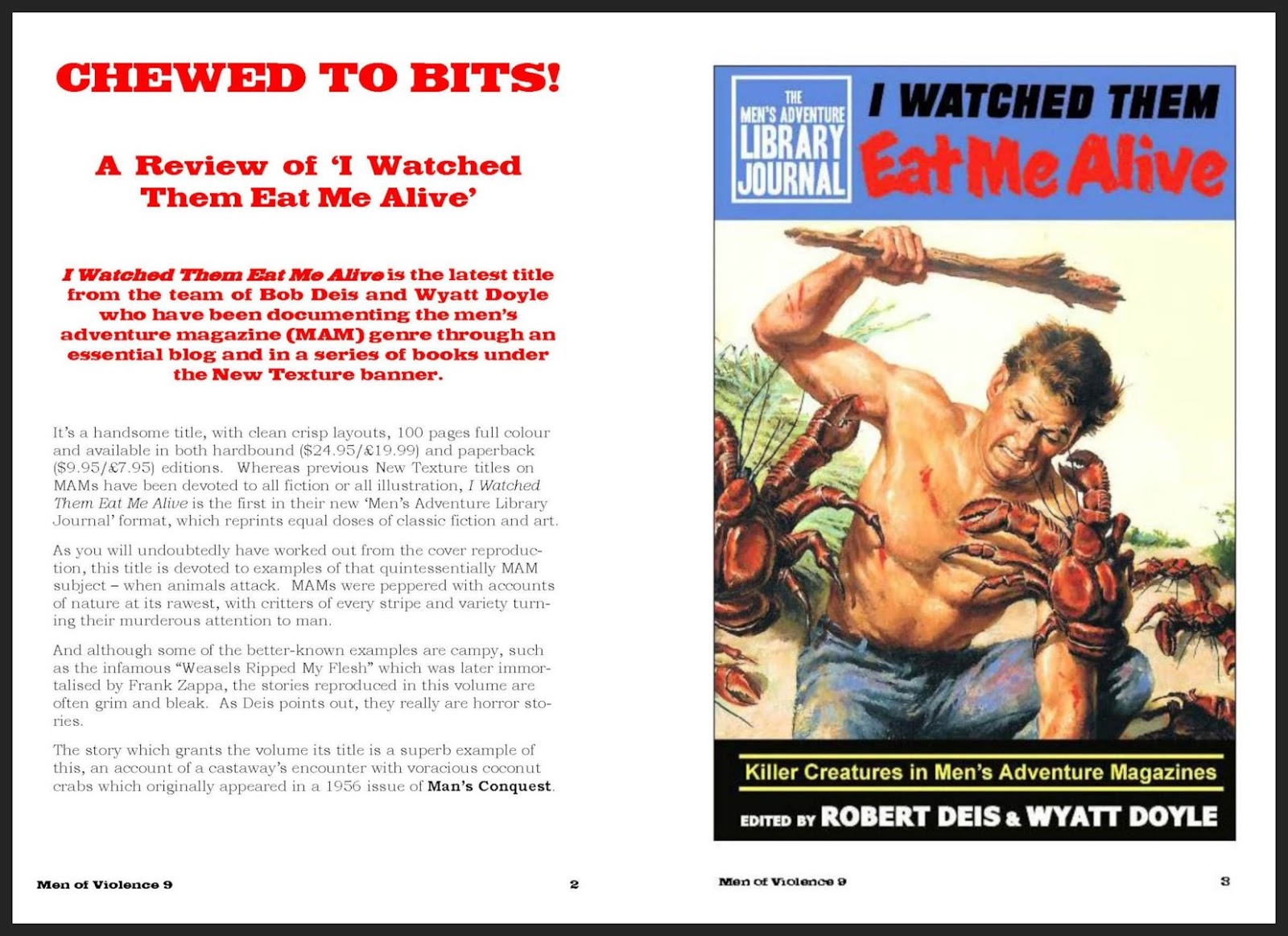 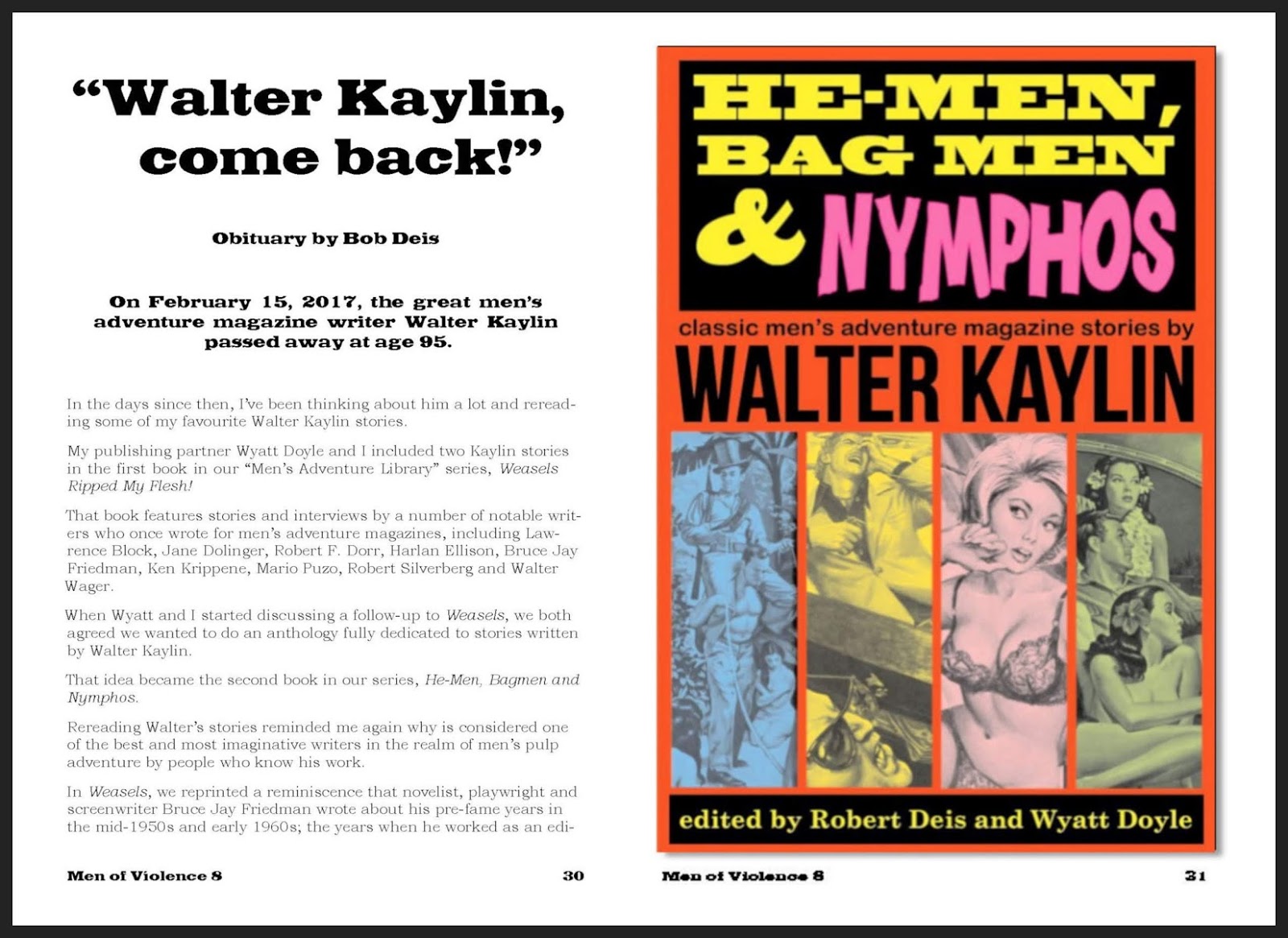 PAPERBACK FANATIC #39 includes a terrific article by Paul Bishop about Steve Holland, the model for hundreds of paperback cover paintings (including the famed Doc Savage covers done by James Bama) and thousands of men’s adventure mag cover and interior illustrations.

That issue also has a cool section featuring MAM artwork and artist reference photos Steve modeled for with my friend Eva Lynd, the actress, pinup model and artists’ model who I think of as the female men’s adventure mag superstar. 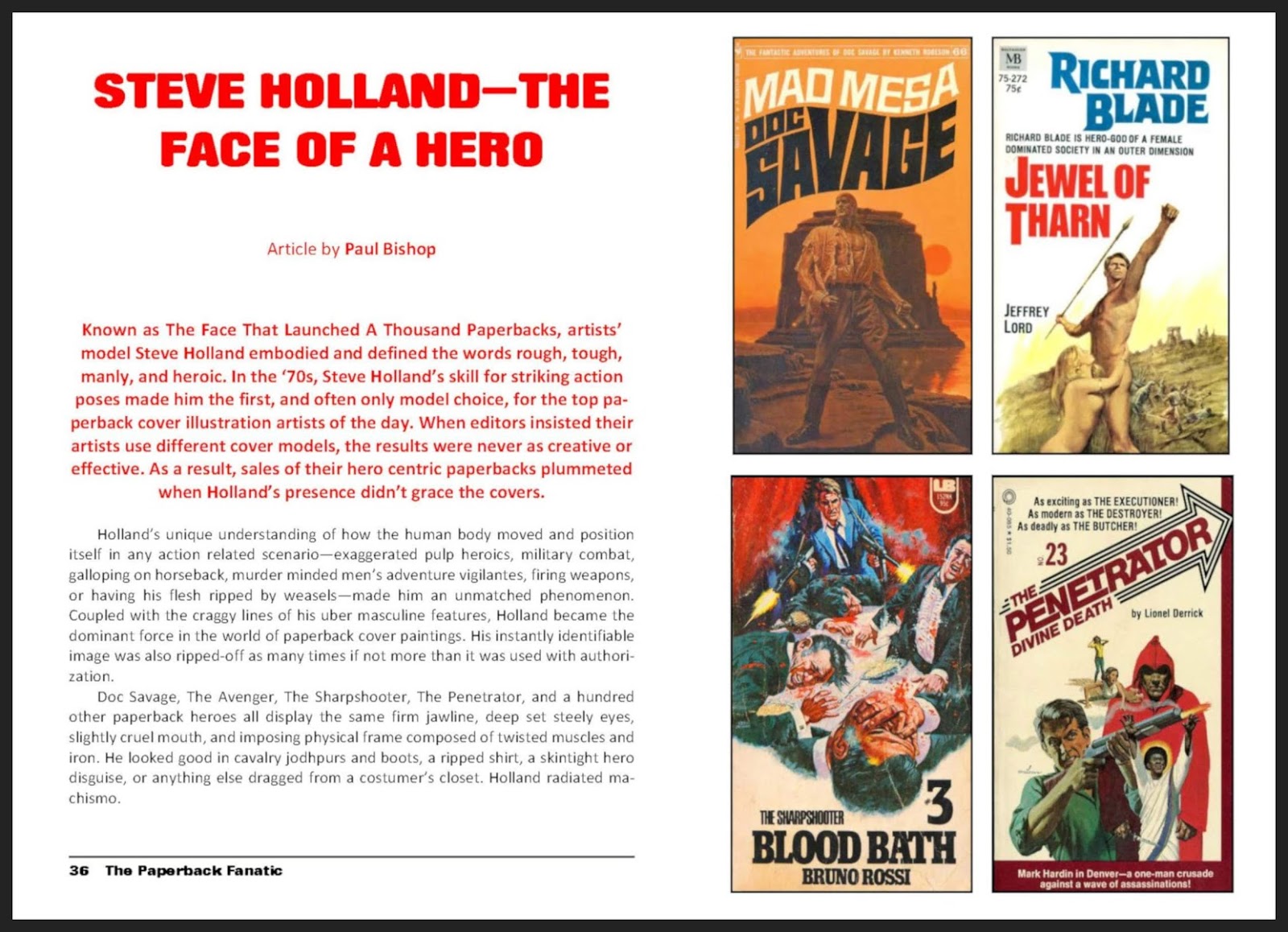 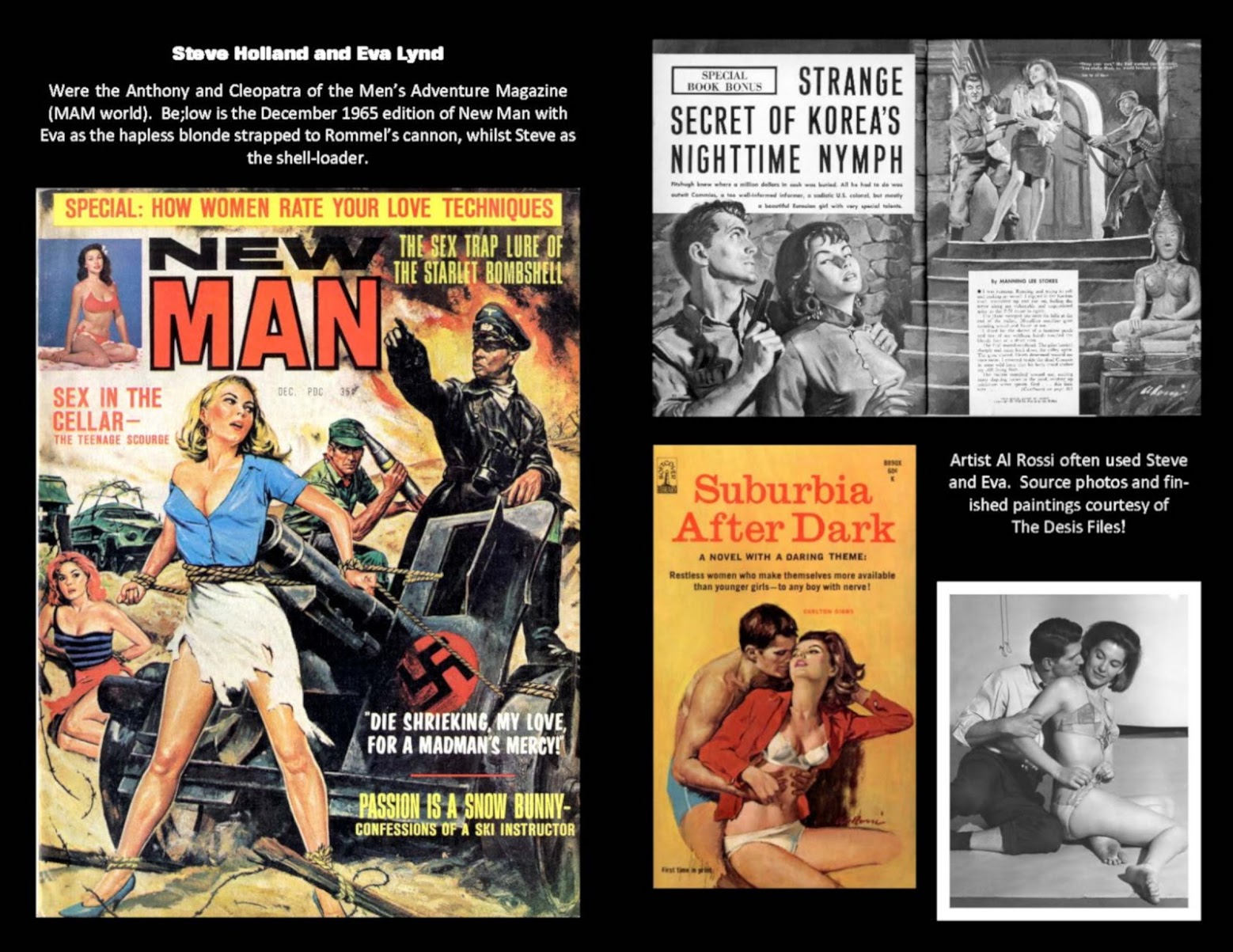 TPF #39 also has an interview with one of my other favorite pulp culture experts, Australian scholar, blogger and novelist, Andrew Nette.

Andrew is the editor of the must-have book GIRL GANGS, BIKER BOYS, AND REAL COOL CATS: PULP FICTION AND YOUTH CULTURE, 1950 TO 1980, which I wrote about here in a past post, and the forthcoming STICKING IT TO THE MAN: REVOLUTION AND COUNTERCULTURE IN PULP AND POPULAR FICTION, 1950 TO 1980.

He also writes the widely-read Pulp Curry blog, and Wyatt and I are proud that Andrew has posted some nice reviews of our recent Men’s Adventure Library books there. 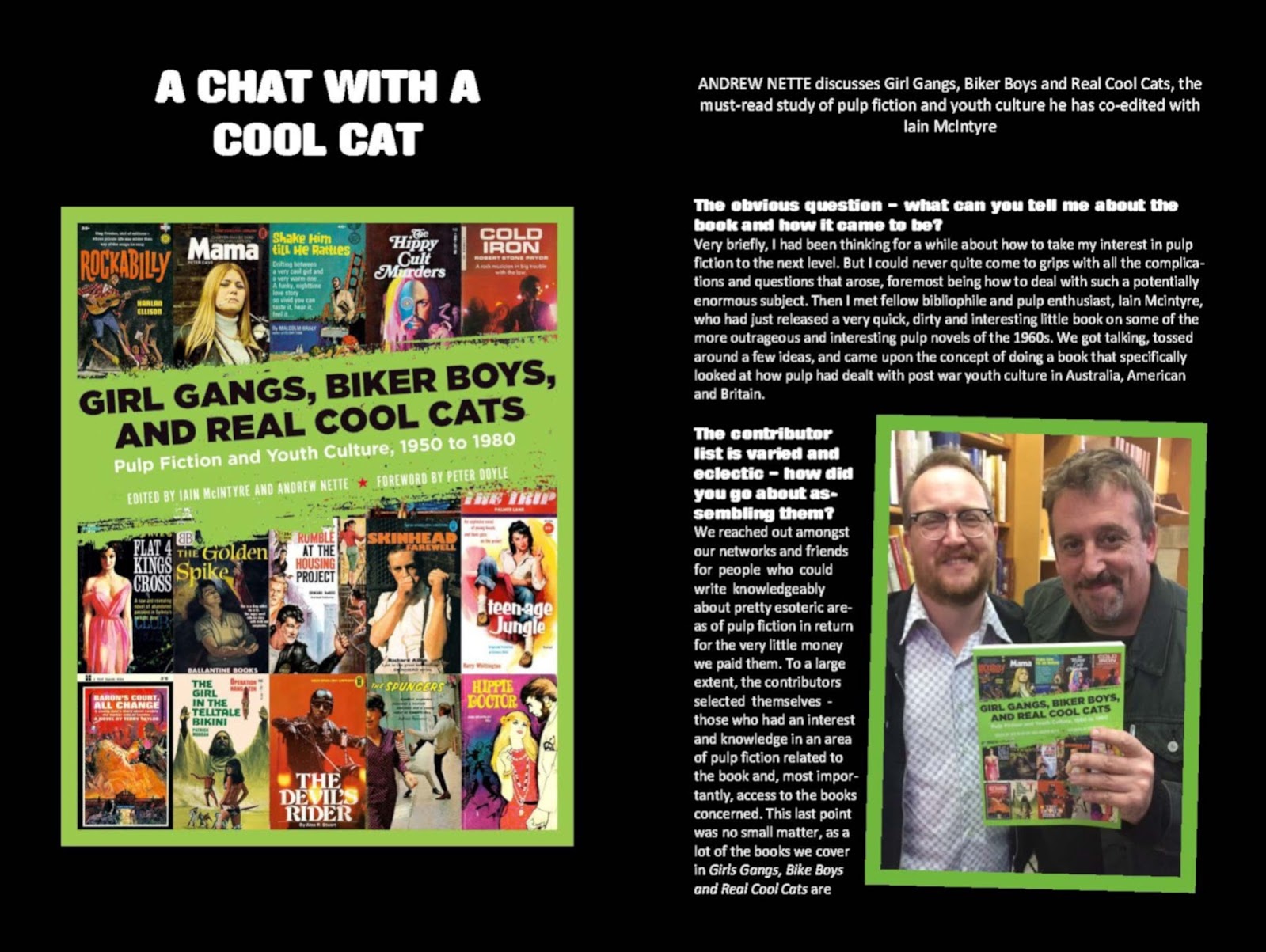 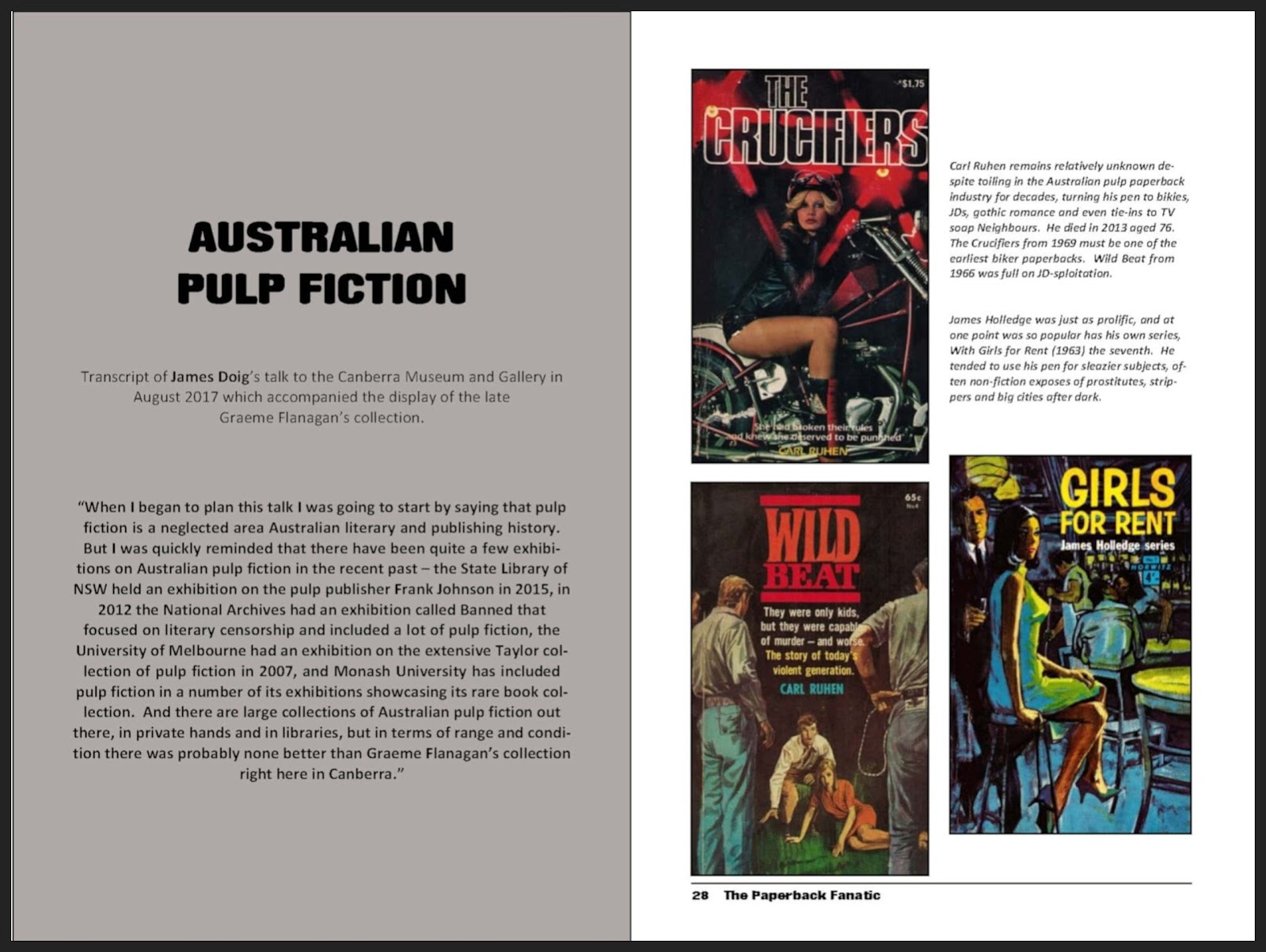 For that issue, I provided Justin with scans of various Manson-inspired MAM covers.

Altogether, I think TSR #8 may be the best overview of pulpy, Manson-related pop media ever published. 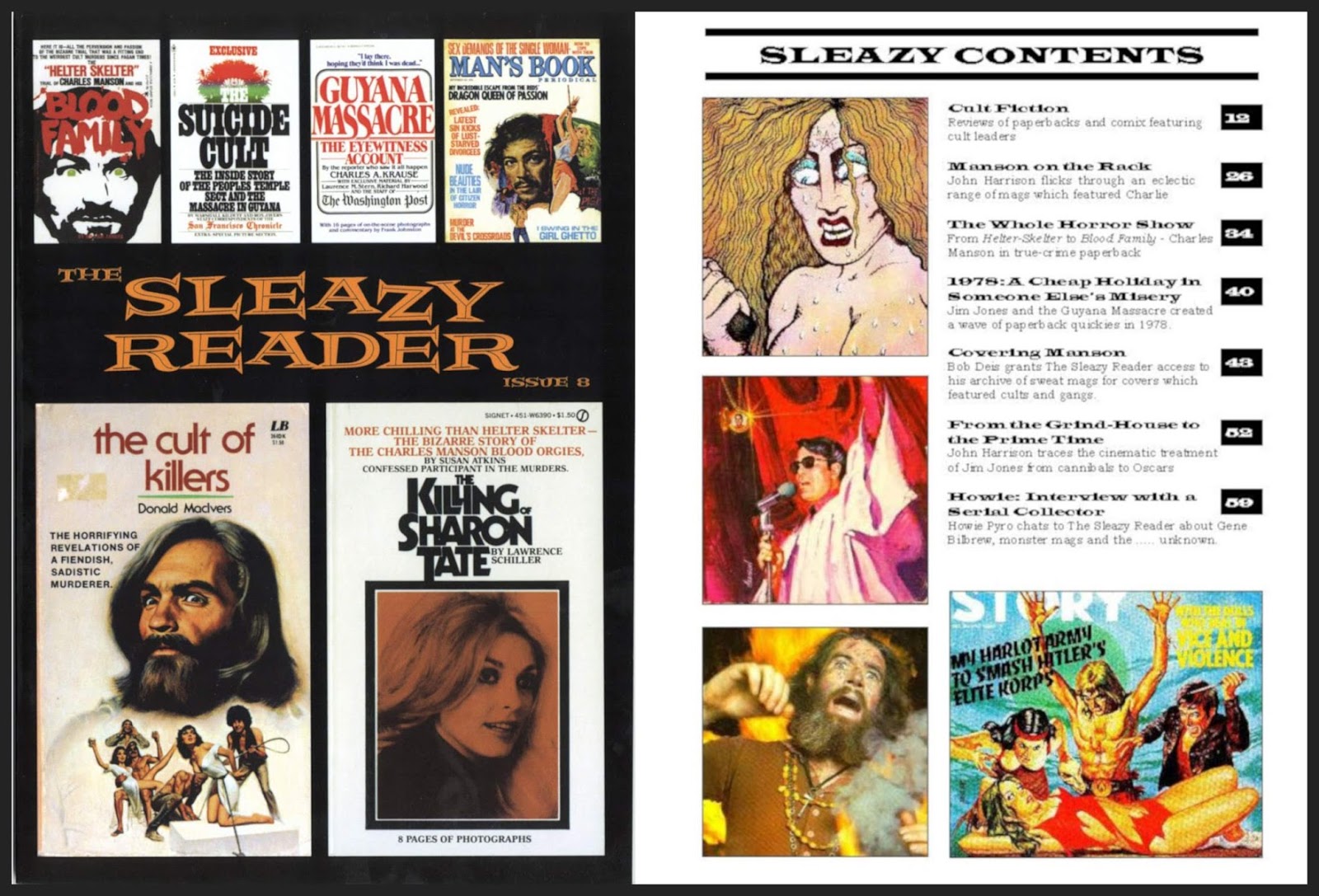 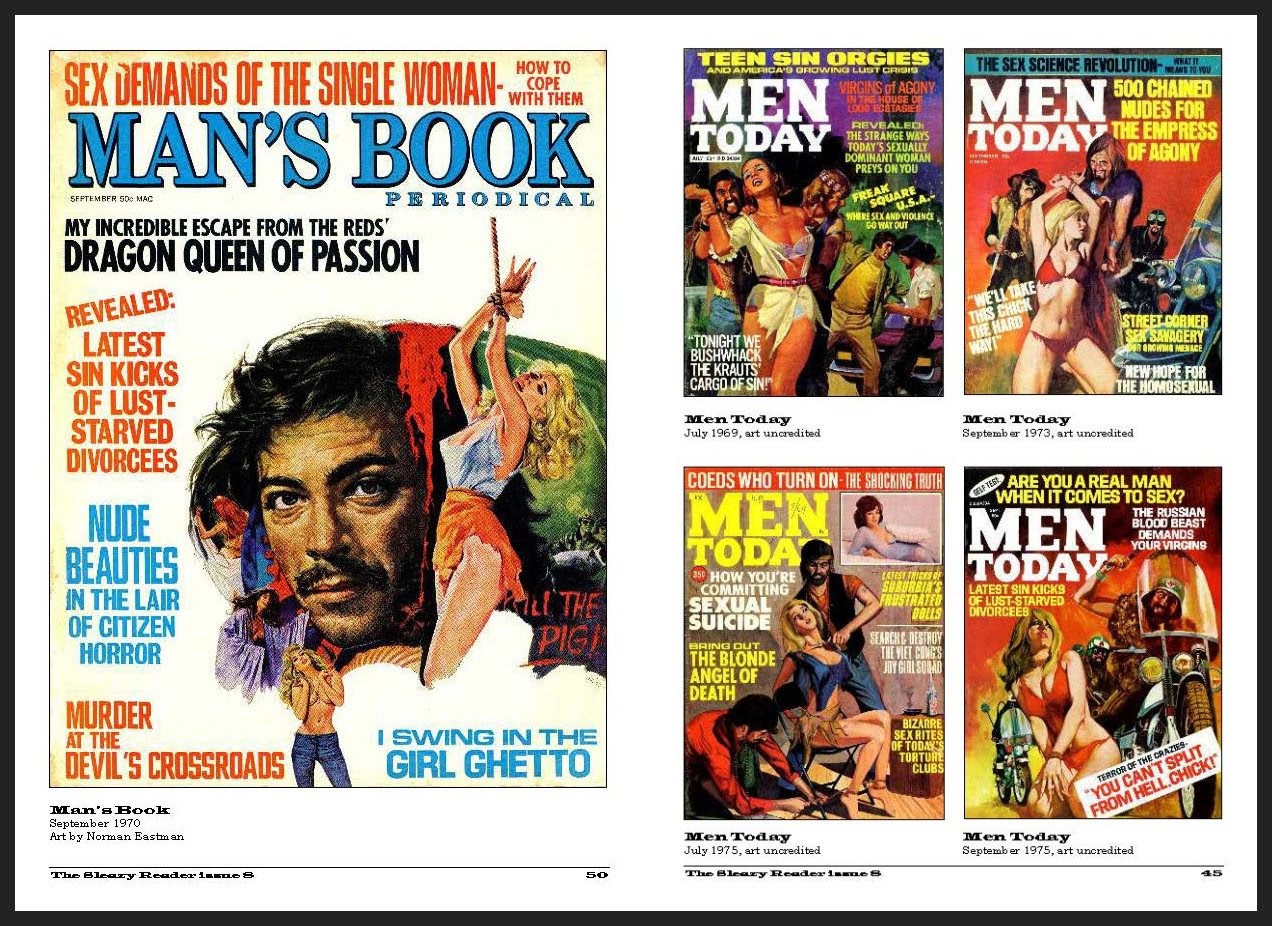 I also particularly enjoyed SLEAZY READER #6. Among other things, it includes very cool articles by Justin about stewardess-related paperbacks like COFFEE, TEA OR ME? and the Lancer Books sexy spy series penned by Martin Jay Golding under the pseudonym Jay Martin.

It also has an article about men’s adventure magazine stories and artwork that feature motorcycle gangs, the subject of our Men’s Adventure Library book BARBARIANS ON BIKES. And, the back cover of SLEAZY READER #6 reprints Samson Pollen’s cover art for the classic teensploitation paperback TEEN-AGE VICE (1957). 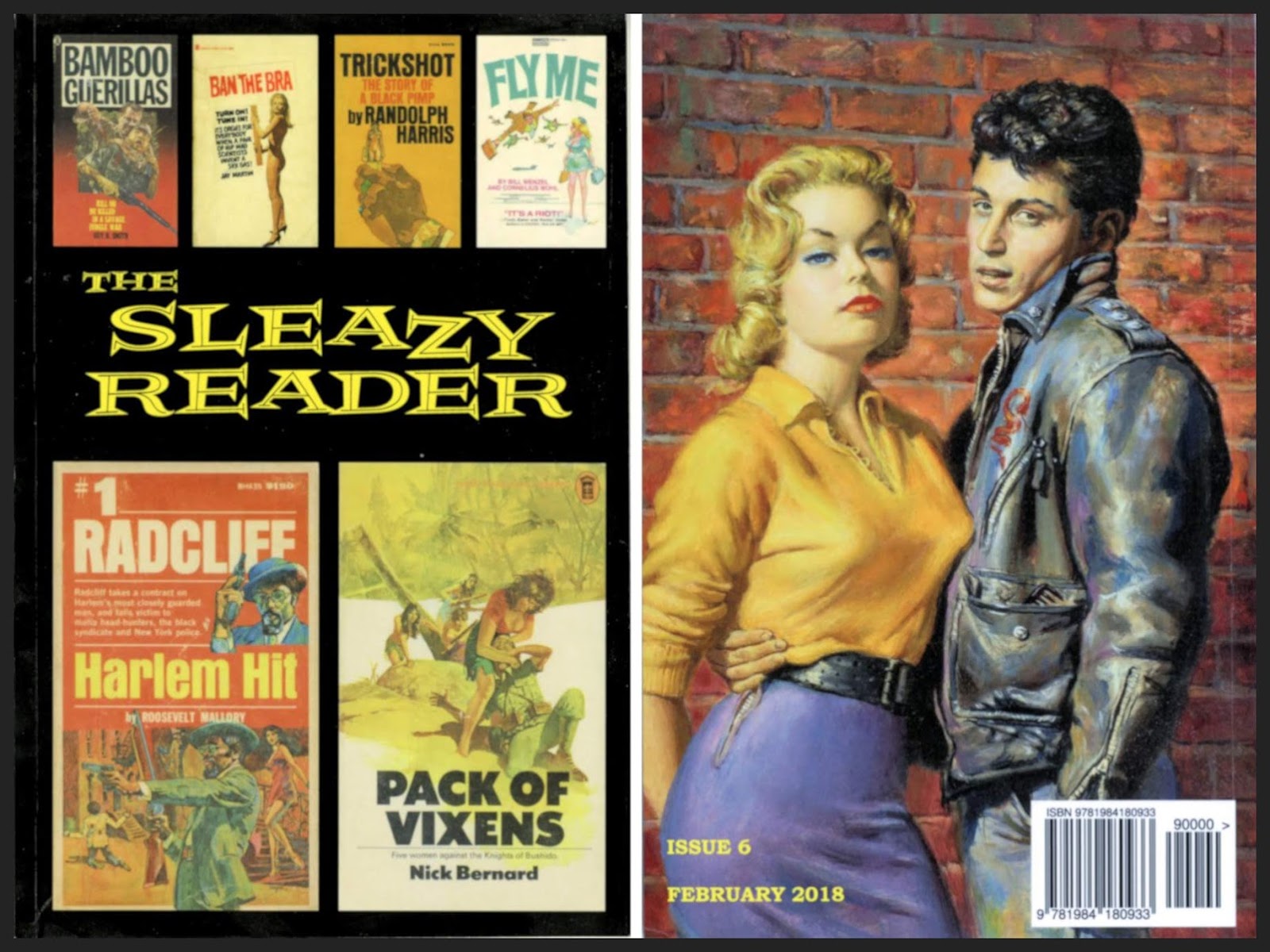 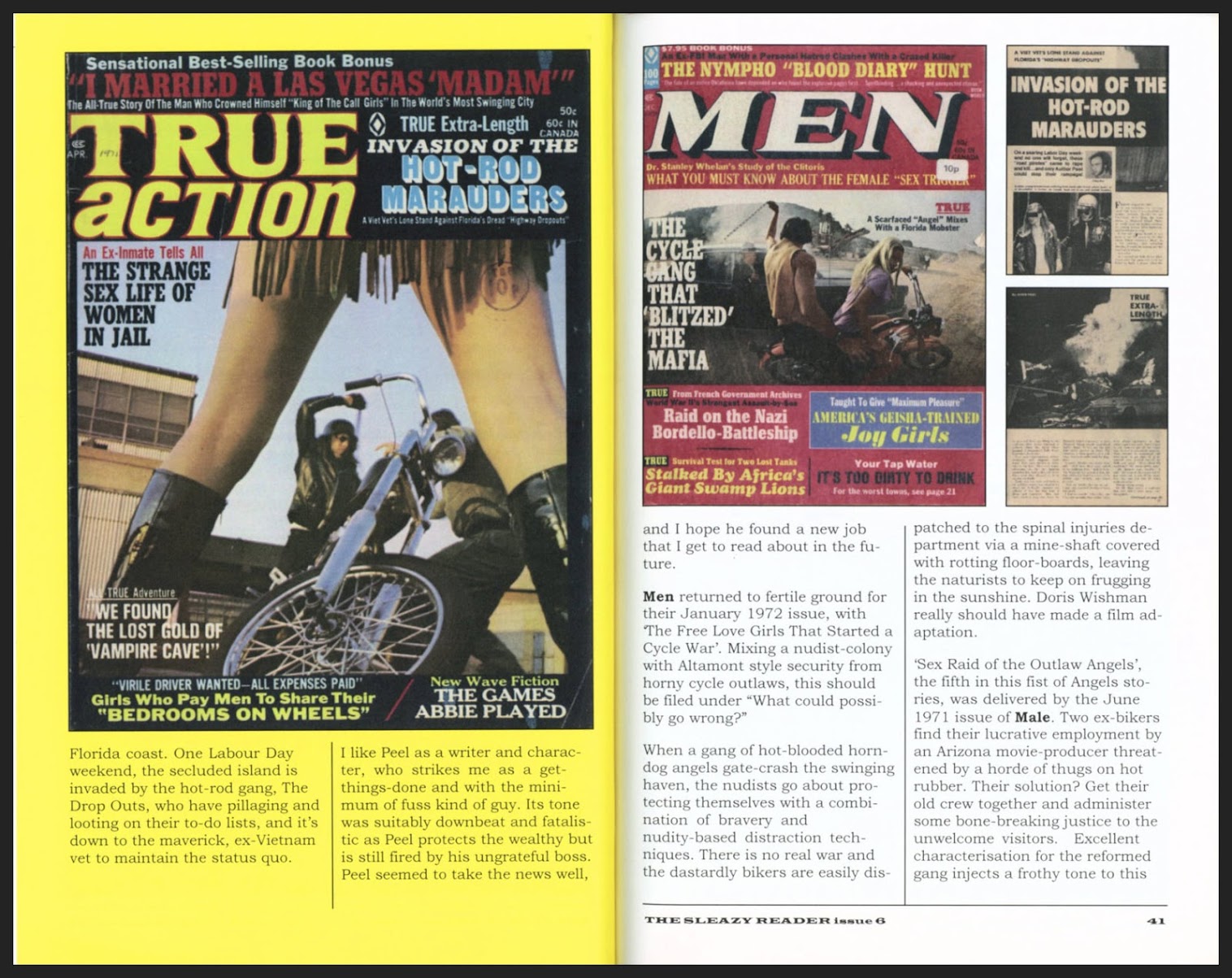 In a nutshell, I am a huge fan of the fanzines created by Justin Marriott with the help of other pulp fiction mavens like Paul Bishop, Morgan Holmes, Tom Simon, Eric Compton, James Doig, and many other knowledgeable contributors from around the world.

TPF #41 delves into the history of Conan the Barbarian paperbacks and comics, novels based on the BBC’s eco-horror cult TV series DOOMWATCH, the boundary-pushing “plantation pulps” inspired by the success of MANDINGO, novelizations of classic Australian films, and the work of top DOCTOR WHO writer Brian Hayles.