In 1969, Don Pendleton’s first two novels about Mack Bolan, “The Executioner” launched one of the most influential action/adventure paperback series ever created. It established a new type of modern hero: battle-hardened Vietnam War veterans who had the skills and guts to impose bloody, “vigilante justice” on mobsters and other villains who evade the criminal justice system.

This special third issue of the MEN’S ADVENTURE QUARTERLY features exclusive reprints of “Book Bonus” versions of the first two Executioner novels, originally published in men’s adventure magazines (MAMs). They’re accompanied by an article written by Don’s wife, author Linda Pendleton, who provides insights into the evolution of the Executioner.

It’s high-impact entertainment you won’t find anywhere else except the pages of the MEN’S ADVENTURE QUARTERLY! 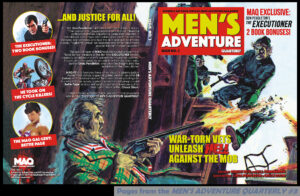