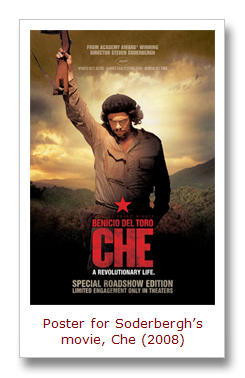 I think it’s an interesting movie that’s worth seeing, though I can understand why it sparked protests by Cuban-Americans in Miami.

It takes a relatively sympathetic view of Fidel Castro, his right hand man Ernesto ‘Che’ Guevara, and the Cuban Revolution that toppled dictator Fulgencio Batista on New Year’s Day in 1959 — and eventually led to Cuba’s continuing Communist dictatorship under Fidel and his brother Raul.

Back in the late 1950s and the early days of Castro’s regime, there were some sympathetic stories about Fidel and his Cuban rebels in men’s adventure magazines, as there were in the mainstream media. 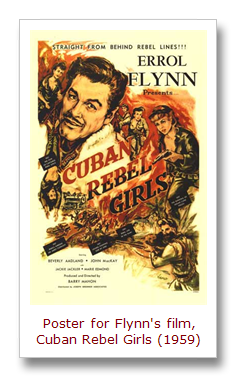 In 1959, Errol Flynn even made a so-bad-it’s-good men’s adventure style movie that portrayed Castro and his guerrillas as as heroic freedom fighters, called Cuban Rebel Girls.

Not long after Cuban Rebel Girls bombed at the box office, Flynn died from liver disease and Castro soon began playing footsie with Nikita Khrushchev and the Soviet Union.

“El Jefe” declared himself a Communist. In 1962, he let the Soviets put nuclear missiles in Cuba, creating the “Cuban Missile Crisis” that nearly resulted in a nuclear war.

So you won’t find sympathetic stories about Castro and his revolution in men’s adventure magazines from the 1960s and 1970s.

As noted by Adam Parfrey in his great book about the genre, It’s a Man’s World:

“Men’s adventure magazines increased their circulation during the height of those uneasy days known as the Cold War. The magazines themselves helped disseminate Cold War code words, issuing anxiety, paranoia, Red Threat, and Yellow Peril every month, though it did so in many issues with a Terry Southern sort of satirical exaggeration. Fidel Castro replaced Nazi and Jap with his own variety of sadistic torture of very white American women, peppered with suggestive Spanish commentary.”

Men’s adventure art expert and collector Rich Oberg owns the original paintings done for some of the best examples of over-the-top evil Cuban Commie covers created for men’s pulp mags. Recently, Rich sent me photos of several of them and, with his kind permission, I’m posting them here.

One of the most famous (or infamous) is the the cover painting Norman Saunders created for the November 1964 issue of New Man magazine.

It shows a leering Castro lookalike getting ready to burn the heaving breast of a scantily-clad white woman with a Cuban cigar. In the background, his comrades are subjecting two other hapless damsels to other forms of bondage and torture. It’s a gonzo scene that goes with the gonzo story inside, “SLAVES OF SIN FOR CASTRO’S TRAVELING TORTURE MASTER.” 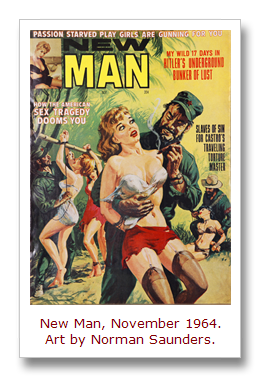 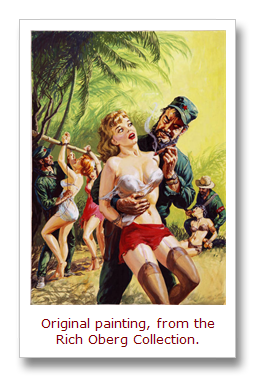 New Man was published from 1963 to 1971 by the Reese and Emtee companies, owned by B. R. “Bud” Ampolsk and Maurice Rosenfield (spelled Rosenfeld by some sources).

Ampolsk and Rosenfield put out of some of the most outlandish men’s pulp mags, such as Man’s Book, Man’s Epic, Man’s Story, Men Today, New Man and World of Men. Their envelope-pushing periodicals helped inspire the term “men’s sweats,” a slang name for the men’s adventure magazine genre.

Another classic evil Cuban Commie cover painting, also by Norman Saunders, is on the the September 1965 issue of New Man. It’s even further out than the November ‘64 example. So is the title of the story it was done for: “KISS THE SKULL OF DEATH, MY BEAUTIFUL MUCHACHA!” 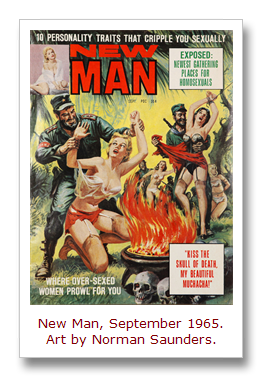 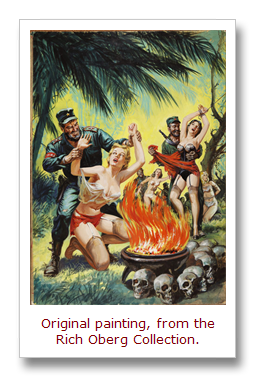 Rich Oberg also sent me a photo of the original cover for an evil Cuban Commie cover by another favorite artist of Ampolsk and Rosenfield, Norm Eastman, who did most of the famous Nazi bondage and torture cover paintings used on Reese and Emtee magazines. 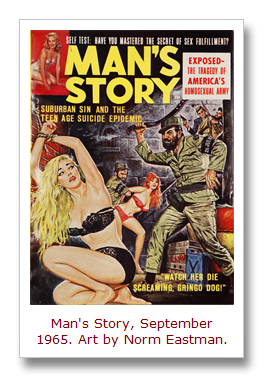 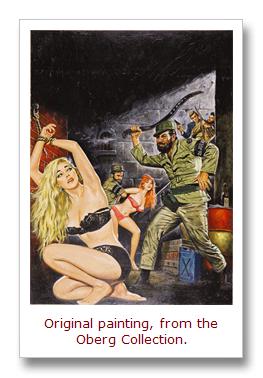 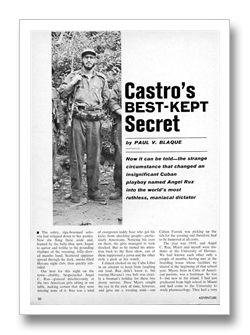 (Clearly, these kinds of images and stories are totally politically incorrect. And, if you’re unable to appreciate the campiness of such cultural artifacts you should not be reading this blog.)

By the way, there’s a previous post on this blog about one of my favorite Fidel Castro stories from a men’s pulp mag.

It was published in the December 1965 issue of Adventure magazine and is titled “CASTRO’S BEST-KEPT SEX SECRET.”

It supposedly explains how a sex-related event in 1948 turned Castro into a megalomaniacal madman and ultimately resulted in the Cuban Revolution.

If you haven’t read that one yet, click this link to download the entire story in PDF format.